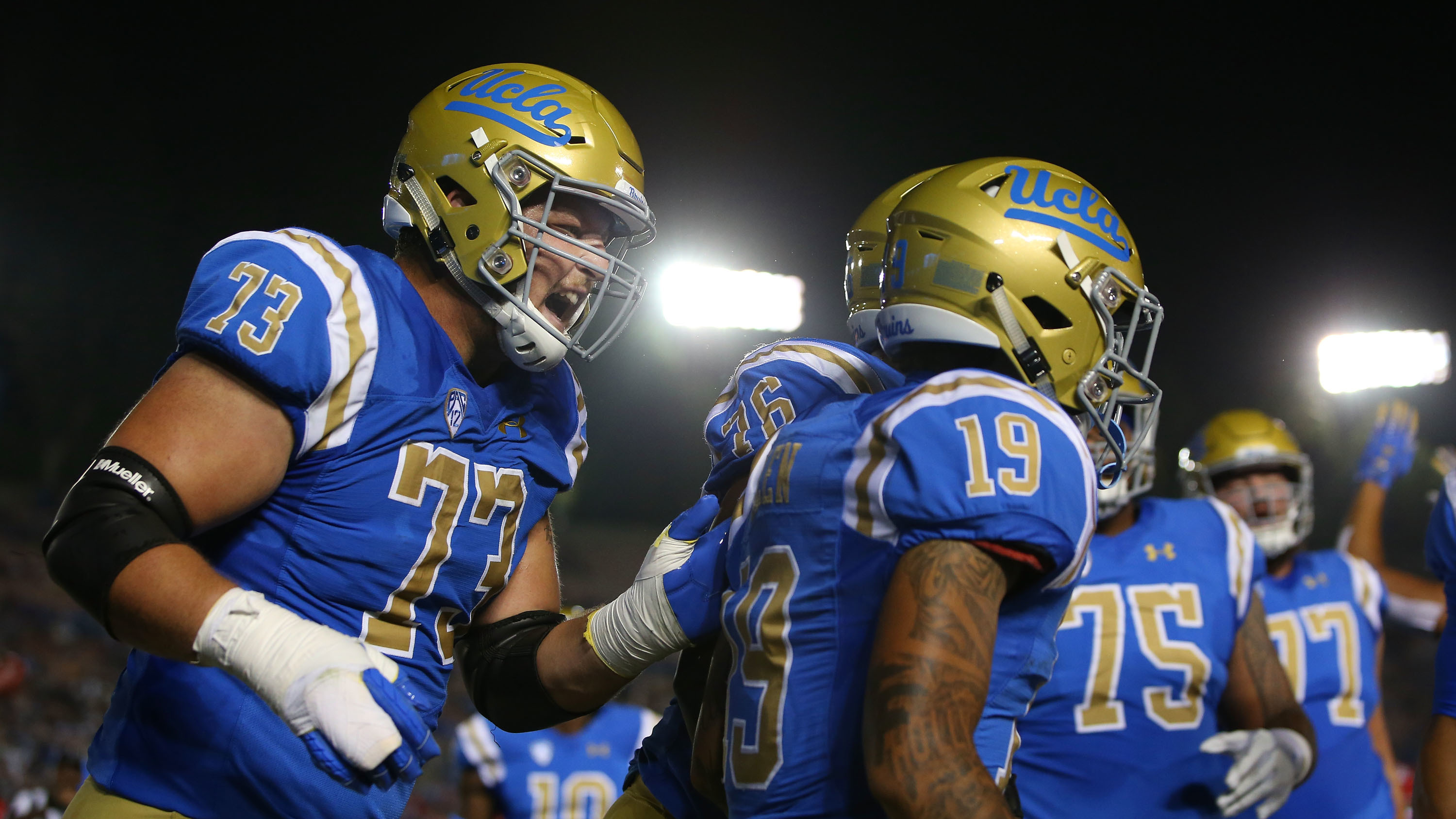 UCLA players celebrate during a game against the Arizona Wildcats at the Rose Bowl last year in Pasadena, Calif. Gov. Gavin Newsom has signed a bill paving the way for college athletes in the state to hire agents and sign endorsement deals. Photo by Victor Decolongon - Getty Images

In a move that puts California on a collision course with the NCAA, Gov. Gavin Newsom has signed a bill effectively allowing college athletes in the state to earn compensation for the use of their likeness, sign endorsement deals and hire agents to represent them.

The governor signed the measure in a segment released Monday by Uninterrupted, a sports programming company co-founded by LeBron James.

Newsom proclaimed the move as "the beginning of a national movement — one that transcends geographic and partisan lines."

"Collegiate student athletes put everything on the line — their physical health, future career prospects and years of their lives to compete. Colleges reap billions from these student athletes' sacrifices and success but, in the same breath, block them from earning a single dollar," he said in a statement. "That's a bankrupt model — one that puts institutions ahead of the students they are supposed to serve. It needs to be disrupted."

California is the first state to pass such a law, which is to take effect on Jan. 1, 2023.

That marks a significant shift from the current policies enforced by the NCAA, collegiate sports' national governing body, which generally renders student-athletes ineligible to accept compensation for "the use of his or her name or picture to advertise, recommend or promote directly the sale or use of a commercial product or service of any kind."

And the NCAA Board of Governors pushed back hard against the bill at the time of its passage in the Legislature, saying that it would leave the playing field for universities of different sizes radically uneven.

"Right now, nearly half a million student-athletes in all 50 states compete under the same rules," the 22-member panel composed mostly of university presidents and athletic directors said in a letter to Newsom on Sept. 11. "This bill would remove that essential element of fairness and equal treatment that forms the bedrock of college sports."

On Monday, shortly after Newsom's announcement, the NCAA released another, slightly more conciliatory statement — one acknowledging that "changes are needed to continue to support student-athletes" but also warning that "this new law already is creating confusion for current and future student-athletes, coaches, administrators and campuses, and not just in California."

"We will consider next steps in California," the group added, "while our members move forward with ongoing efforts to make adjustments to NCAA name, image and likeness rules that are both realistic in modern society and tied to higher education."

The financial stakes of the dispute are massive.

Between TV rights, marketing fees and other avenues — particularly for its major cash cow, the NCAA Division I men's basketball tournament — the organization has reported annual revenues cresting $1 billion.

The NCAA maintains that it converts much of that intake into crucial opportunities for student-athletes, saying it has "provided billions of dollars in scholarships and the opportunity for millions across 24 sports to earn undergraduate and graduate degrees."

That hasn't silenced critics, who have grown louder in recent years amid a recent spate of high-profile investigations — including efforts by the FBI — looking into alleged corrupt recruiting practices in NCAA men's basketball. The hefty punishments levied against schools and players by the national governing body has focused a spotlight on why the competitors featured in such a lucrative industry are left out of its profits.

Michael Sokolove, who wrote of the massive scandal at the University of Louisville's basketball program in The Last Temptation Of Rick Pitino, talked to Fresh Air last year about one notable discrepancy.

"If you look at a program like Louisville, which is a program that I focused on, they generate about $45 million a year in revenue. They give out 13 scholarships. That adds up to about $400,000 a year. The rest of it gets spread out to the coach, who makes $8 million a year, to the assistant coaches, who make as much as a half-million dollars a year," Sokolove said.

"All throughout the athletic department, people are making six-figure salaries. It does not go to the players, what I call the unpaid workforce."

Pushback also has come from a number of prominent athletes, including James, who opted to skip college basketball entirely to head straight to the NBA — before the pro league implemented a minimum age requirement in 2006, barring others from following James' path.

"Part of the reason I went to the NBA is to get my mom out of the situation that she was in," James said in the informal signing ceremony with Newsom that was held on a barbershop set. "I couldn't have done that if I would have stepped on a college campus."

Others, such as NFL cornerback Richard Sherman, have rejected the notion put forward by the NCAA and others that a free college education is recompense enough for the amount of work these athletes put in. Sherman told Sports Illustrated in 2015 that he would "love for a regular student to have a student-athlete's schedule during the season for just one quarter or one semester and show me how you balance that."

END_OF_DOCUMENT_TOKEN_TO_BE_REPLACED
KCRW's Power in Numbers Drive: Today, your dollars will be doubled up to $25,000, thanks to the generosity of Paul & Renee Haas.
Give Now
Give Now