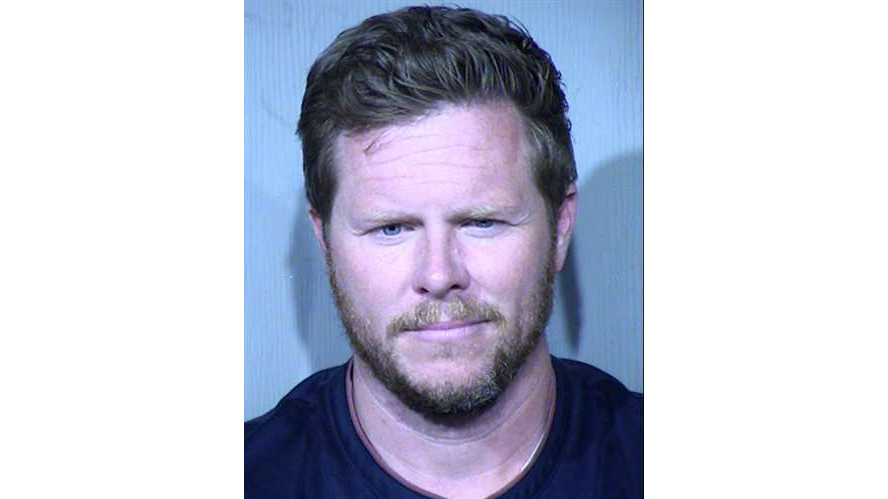 Maricopa County, Ariz., Assessor Paul Petersen is accused of smuggling pregnant women from the Marshall Islands and paying them to give birth in the United States. In Arizona, Petersen has been indicted on theft, fraud and forgery charges for allegedly claiming pregnant women from the Marshall Islands were residents of Arizona in order to obtain medical care for them. Photo by NPR - Maricopa County Sheriff's Office

A public official in Arizona has been arrested in connection with charges that he ran a multimillion-dollar scheme in which he smuggled pregnant women from the Marshall Islands to profit from their newborn babies. Authorities say Maricopa County Assessor Paul Petersen's fraudulent adoption enterprise left a trail of forged documents and violated U.S. and international laws.

Petersen operates an adoption law firm. For years, he has connected American families seeking to adopt with women from the Marshall Islands — but state and federal prosecutors say Petersen falsified documents and lied about the mothers' residency so he could enrich himself.

Federal prosecutors in Arkansas on Wednesday unsealed a criminal indictment against Petersen and an associate, Maki Takehisa, on smuggling, money laundering and visa fraud charges.

"Many of these mothers described their ordeal as being treated like property," said Duane Kees, the U.S. attorney for the western district of Arkansas. "Make no mistake: this case is the purest form of human trafficking."

In Arizona, Petersen has been indicted on theft, fraud and forgery charges for allegedly claiming pregnant women from the Marshall Islands were residents of Arizona in order to obtain medical care for them. He is also accused of violating an international agreement between the U.S. and the Marshall Islands that allows Marshallese residents to travel and take jobs in the U.S. but that bans them from entering the U.S. for the purpose of placing a child for adoption.

Prosecutors say the women were instructed by Petersen to lie to federal officials that they were not traveling for adoptions.

In separate charging documents, Utah prosecutors accuse Petersen of human smuggling for "adoption-related exploitation in the Republic of the Marshall Islands," claiming Petersen has targeted birth mothers in the Marshall Islands as well as adoptive parents in the United States.

In Utah, prosecutors said Petersen transported more than 40 pregnant women from the Marshall Islands and charged parents in the U.S. tens of thousands of dollars for the adoption of the women's newborns. Each time, authorities say, he lured the pregnant women to the U.S. with payments of $10,000.

During that same period, $2.7 million related to the alleged smuggling operation flowed into Petersen's bank account, according to Utah authorities.

The women sometimes came to Utah just days before they were expected to give birth. They stayed in a home owned by Petersen, according to the charging documents. At times, Petersen allegedly housed as many as 15 pregnant women in the same home, leading one tipster to describe Petersen's business as a "baby mill."

Parents interviewed by Utah investigators said Petersen and his associates lied or omitted information about the adoptions, including that the pregnant women were paid for the adoptions and that the process was forbidden under international law.

"It is heartbreaking that these families from both countries were so cruelly manipulated," Utah Attorney General Sean Reyes said in a statement.

The Marshall Islands, which gained full independence in 1986, is an island nation of some 53,000 people that was formerly the site of U.S nuclear weapons tests.

Neither Petersen nor his lawyer has replied to requests by NPR for comment.

According to a website for Petersen's firm, the average cost he charges for completing an adoption from a Marshallese mother is $30,000 to $40,000.

The site touts Petersen's expertise in arranging adoptions from the Marshall Islands, citing testimonials from people who note his "genuine passion" and praise him for "making a difference in the world."

The site says Petersen's firm is uniquely suited to carry out adoptions in the Pacific Island nation.

"Paul is the only attorney involved with the Marshallese community in the United States who is fluent in the Marshallese language. Because of this fact, Paul has been successful in hundreds of Marshallese adoptions across many different states," according to Petersen's site. It adds, "Paul lived in the Marshall Islands for two years, and therefore is familiar with their language, customs, and unique cultural perspective on adoption."

In November, Honolulu Civil Beat published an investigation titled "Black Market Babies" that focused on Petersen's question-raising practice of flying in pregnant women from the Marshall Islands and connecting their newborn children with American adoptive parents.

The news outlet interviewed women from the Marshall Islands who said they never expected to sever all ties with their children before handing their kids over to parents in the United States. The investigation called Petersen the most active Marshallese-adoption lawyer in America.