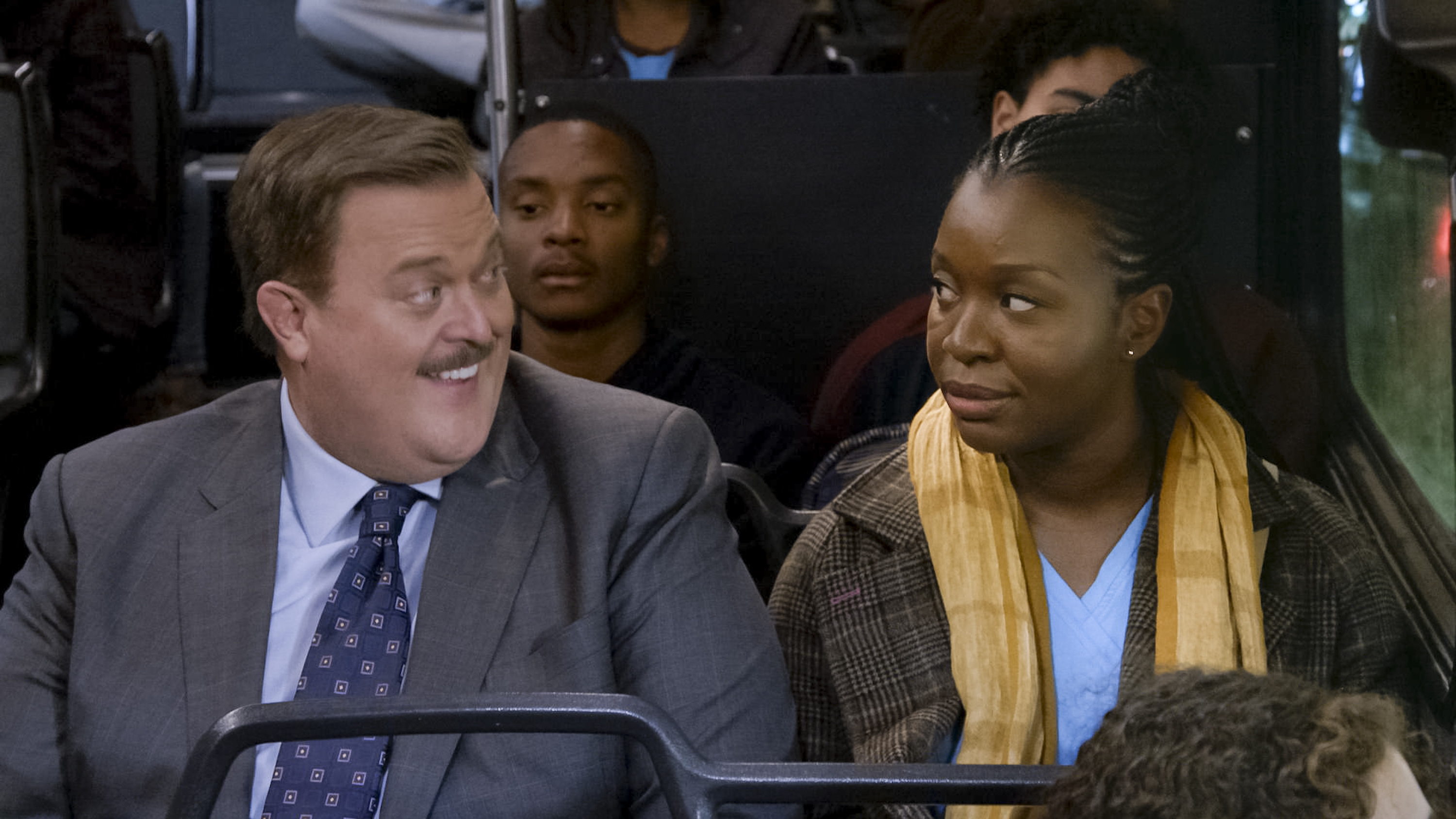 BOB ❤ ABISHOLA is a love story about a middle-aged compression sock businessman from Detroit who is smitten with his cardiac nurse, a Nigerian immigrant. Photo by NPR - CBS

"There's a white man at the door."

In the new CBS comedy Bob Hearts Abishola, those words cause a flurry of concern for an immigrant Nigerian family living in Detroit.

"Tell me, when has that ever been good?" demands Auntie Olu, played by Shola Adewusi.

The white man she's referring to is Bob — a stocky, 50-year-old guy played by Mike & Molly actor Billy Gardell. He's come to Olu's house in search of her niece Abishola, portrayed by Nigerian actress Folake Olowofoyeku. At first, Olu and her husband assume something has gone terribly wrong. But their worries are soothed when they realize Bob is interested in asking Abishola out.

Bob Hearts Abishola, from executive producer Chuck Lorre — known for his popular shows like Mike & Molly, The Big Bang Theory and Two and a Half Men — premiered on CBS on September 23. It follows the unlikely connection between Bob, who suffered a heart attack from the stress of running his family's compression sock business, and Abishola, a Nigerian nurse who sang a Yoruba lullaby to calm him down — and kindled his affection.

The show is definitely an exceptional moment in U.S. television. Earlier this year, research released by the University of Southern California found only 25 major scripted storylines about Africa in over 700,000 hours of American television. Fourteen of those 25 touched on violence or crime.

During a press event earlier this year, Lorre said that the idea for this show, which has an audience of about 5 million viewers each week, came from his desire to showcase the hard work of immigrants in the U.S. and their many contributions to American culture. He approached the British-Nigerian comedian Gina Yashere to co-create the project.

'Dapo Oyewole, a Nigerian scholar and international development expert, is already a fan of the series. He says the show is powerful because it hinges on a universal phenomenon: Love.

"I really think this show is a ray of sunlight at a time when globally we're seeing more nationalism, we're seeing more racism, we're seeing more people fight against the so-called 'other'," he says. "I think in this instance [of Bob knocking on Abishola's door], it was beautiful to find out that no, it had nothing to do with immigration [officers]. Nobody is saying anything is stolen. It was actually somebody that was in love."

Bob is determined to get to know Abishola better, but she initially rejects his advances because of their differences and the fact that she doesn't think she has time to date. Her lack of interest in a potential suitor sparks a mission for her Auntie Olu and Uncle Tunde to get a romance going.

Dolapo Adedapo, a Nigerian nonprofit consultant and radio show host, sees a lot of her own family in this intergenerational plotline.

"I'm a Yoruba woman, and I can literally say I've experienced maybe one or two of those scenarios where it just seems like the entire family — the aunt, the uncle, the mom — everyone is invested in your personal life, invested in seeing you get married," she laughs. "I've definitely experienced that. You can tell research was done, and it speaks to what actually happens in a Yoruba family. It's refreshing."

Both Adedapo and Oyewole note that the sitcom accurately depicts the importance of respecting your elders in Yoruba culture. It also highlights the challenges African immigrants face in the United States — like when Abishola's son gets in a fight at school over a derogatory comment made by another student.

In the show, Abishola is a single, working mom who moved to Michigan from Nigeria to provide a better future for herself and her young son. That storyline hits especially close to home for Adedapo, whose mother was also a registered nurse from Nigeria who immigrated to the United States with her children.

Adedapo says she's usually weary of movies and television shows that fall into stereotypical African accents and tropes, but she's impressed with how Bob Hearts Abishola has stayed true to Nigerian culture — down to Abishola's accent. It probably helps, she says, that Olowofoyeku and Yashere are both Nigerian.

The series also offers a welcome departure from the white-savior complex, Oyewole says.

"This show teaches the rest of the world about some of the nuggets of wisdom we have in Africa," he says, impressed with how well the show captures the importance of honoring family in Nigerian culture.

Bob Hearts Abishola also grapples with the different segments of the African diaspora. In one scene, Abishola and her friends discuss their ranking for a potential partner. A Nigerian man from the same ethnic group is at the top of their list — but a heated discussion breaks out when Abishola and her pal Kemi, played by Yashere, say an African-American man ranks last on their list. Their African-American friend Gloria is offended at the implication that Africans are better than African-Americans. "You think white folks see a difference between us? To them, we all look the same," she says. "You get pulled over by a cop, he's not going to see your little ranking system. He's just going to see this," she adds, pointing at Kemi's skin.

Adedapo and Oyewole say they hope the show will continue to feature these difficult conversations even if they might make audiences uncomfortable.

"It shows you that the color of our skin does not determine how we think, in a way," says Oyewole. "It takes us to a deeper story not only about race, but also about class and responsibility."

As the first season of Bob Hearts Abishola plays out, both Adedapo and Oyewole say they're excited to see how the titular characters' relationship builds off their vastly different backgrounds. And they'd love to see an episode where Bob visits Nigeria to see Abishola's culture firsthand.

"The show so far really just makes us all want to be a little bit more understanding of each other. You see other people's plights and you kind of get the behind-the-scenes of their struggles," says Adedapo. "It lets us all be more human."