With Blackouts, California's Electric Car Owners Are Finding New Ways To Charge Up 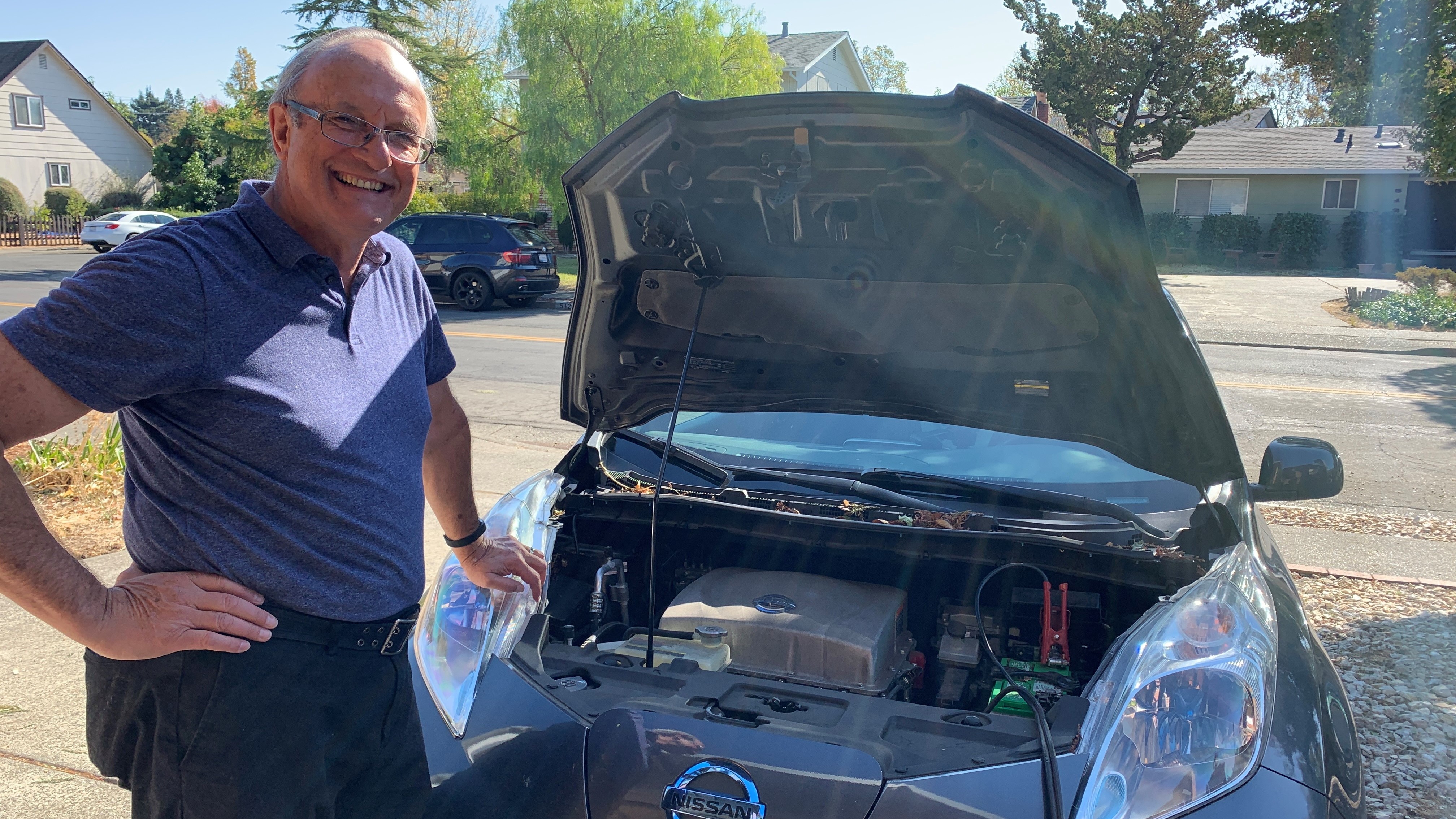 Clarence Dold used his 2013 Nissan Leaf to power his house during a four-day blackout in Santa Rosa, Calif., as a result of the Kincade Fire. Photo by Vanessa Romo - NPR

Lawrence Levee's evacuation call came at 4 a.m. The Getty fire was just a few miles away. He and all of his Mandeville Canyon neighbors needed to evacuate.

He grabbed what he could and threw it into his bright blue electric Chevy Bolt. His car battery was only charged halfway, but that left him with plenty of power to make a quick getaway and then some.

But after driving around the next day, running errands in an area he didn't know well, he was in a pickle. He couldn't find a charging station. And he had 25 miles left to his tank.

"Where are the cheap charging stations?" Levy asked a Facebook group for Bolt owners, where members have been talking about how to charge up in a disaster situation.

Levee is one of hundreds of thousands of electric car drivers in California, many of whom are caught in a state-wide struggle for electric power. As flames rip through rural and urban areas, utilities are cutting about a million customers off the grid. The blackouts sometimes last for days at a time, forcing some electric car owners to find alternative ways to charge up.

It's an ironic conundrum in a state that's home to more electric cars than any other other. California has just under half of the electric cars in sold in the U.S., according to EV Volumes, a group that tracks electric car sales.

In Levee's case, he didn't expect to be away from his house for so long. Normally, he'd pull into his garage and connect to a solar-powered battery. But that was impossible. Instead, he tried to hit up a nearby public charger that he remembered driving past a couple of times. But when he got there, it was broken.

Dreaded "range anxiety" set in. If he didn't plug in soon, he could end up stranded.

But his trusty Bolt Facebook group came to the rescue. That's where electric car fans commiserate, offer advice and do the occasional gas-car-driver bashing. Lately, they've been talking about blackouts. They pointed him to an app, and he found a free charger at a mall a few miles away.

Levee has only owned his Bolt for eight months, and already he says he'll "never go back to a regular car." Despite the brief inconvenience and the fire evacuations that are in his future, he notes California has better electric car infrastructure than any other state, with 18,000 public charging stations, according to the California Energy Commission.

And some electric car owners are taking advantage of these charging stations in new ways.

Clarence Dold lives in Sonoma County, which had been ravaged by the Kincade fire. Dold owns a 2013 Nissan Leaf and was left without power for four days.

But Dold found an ingenious use for his car: as a generator to power his house.

All it took was a pair of jumper cables that he connected to the Leaf's battery and an inverter about the size of a dictionary. The inverter box changes direct current (DC) power, the kind that powers electric cars, into alternating current (AC), the electrical current that powers homes.

After that, he ran a series of heavy duty extension cords into the main rooms of his ranch house. Throughout the blackout, Dold said, "were watching TV, and had a cold fridge and a couple of lights and things seemed normal."

The whole thing cost about $200 — a fraction of the price of a generator, which can run thousands of dollars.

Every few hours, Dold said, he'd make his way back into the car to check the battery gauge. He wanted to make sure the house wasn't depleting the car of too much power. If it did, he'd disconnect the cables and drive 5 miles away to recharge at a public charging station.

"The power outages are not over a broad area; this isn't like a hurricane hitting Florida," he explained.

During the blackout, the rest of the neighborhood was a cacophony of gas and electric generator rumblings. Meanwhile, his Nissan Leaf was virtually silent.

For Dold, and other enterprising electric car owners like him, that's the secret sauce to surviving what's becoming the new normal in California.