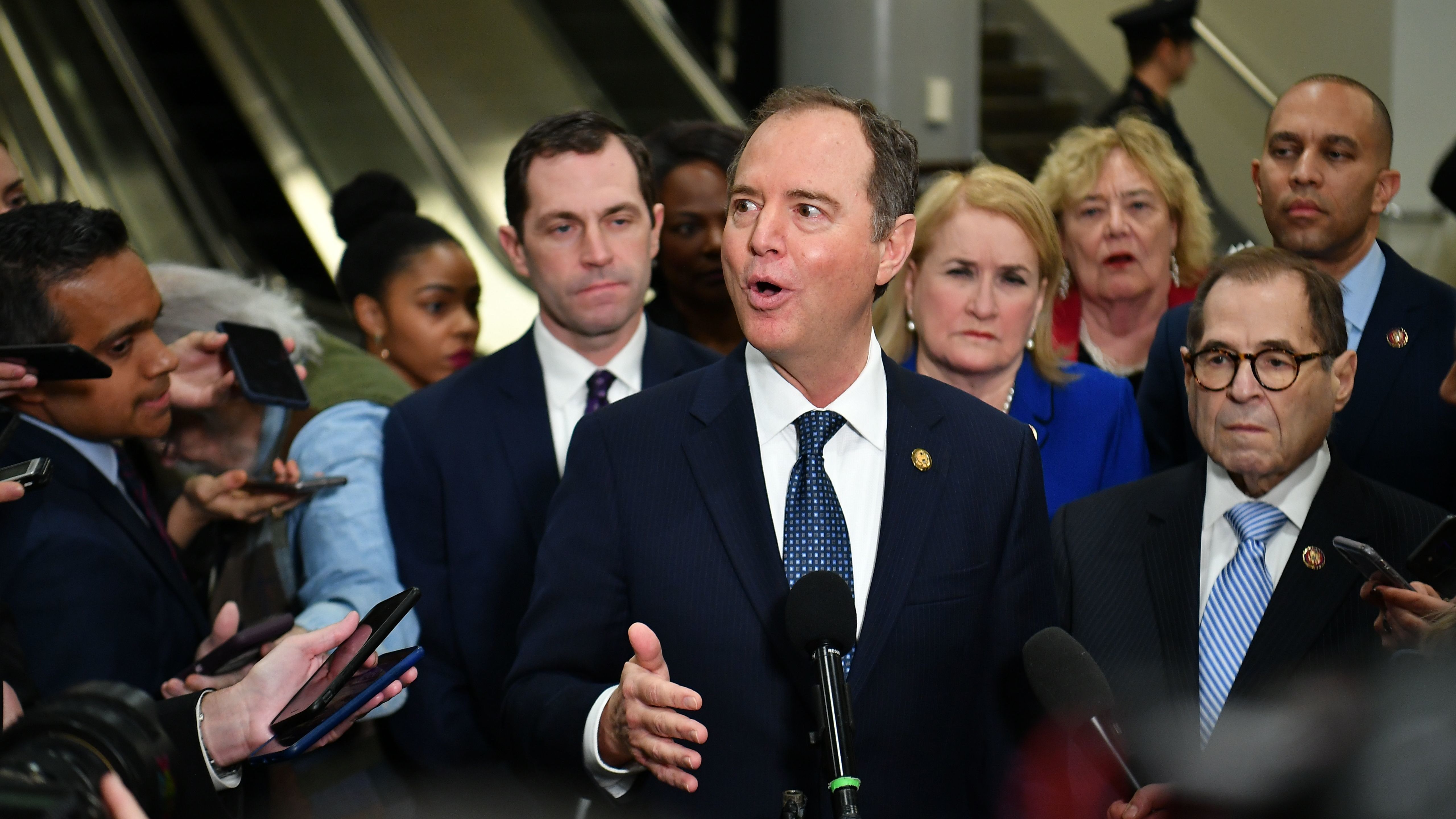 Lead House manager Adam Schiff speaks to the press at the U.S. Capitol on Wednesday ahead of the second day of President Trump's impeachment trial. Photo by Mandel Ngan - AFP via Getty Images

House Democrats concluded on Wednesday the first of three days of opening arguments in the Senate impeachment trial of President Trump, arguing that the president must be removed from office for abusing his office and obstructing Congress.

In his closing remarks, Rep. Adam Schiff, D-Calif., who is leading the prosecution of the president, reminded the chamber of the career civil servants and foreign service officers who sometimes defied orders from the White House not to appear in order to testify about the president's pressure campaign on Ukraine.

"Some courageous people came forward. Courageous people that risked their entire careers," Schiff said. "They risked everything, their careers. And yes I know what you're asked to decide may risk yours, too. But if they could show the courage, so could we."

The trial will resume at 1 p.m. on Thursday.

Schiff recalled the nation's founders who devised of impeachment as way to check an executive who abused the office for personal gain.

"They knew what it was like to like under a despot, and they risked their lives to be free of it. They knew they were creating an enormously powerful executive, and they knew they needed to constrain it," Schiff said.

If Trump is not removed from office, Schiff argued during his opening remarks, the president's actions "will permanently alter the balance of power among the branches of government—inviting future presidents to operate as if they are also beyond the reach of accountability, congressional oversight and the law," he said.

"I recognize that there will be times during the trial that you may long to return to the business of the Senate," Schiff said. "The American people look forward to the same. But not before you decide what kind of democracy you believe we ought to be and what the American people have a right to expect in the conduct of their president."

Although Trump's acquittal is all but certain, since Democrats do not have the votes to convict, both sides continue to spar over the production of evidence, and additional witness testimony, that the White House has blocked investigators from reviewing.

A two-thirds vote (67 votes) is required to convict the president, meaning Democrats would need 20 GOP senators to defy Trump.

But in order to call additional witnesses, like former National Security Adviser John Bolton, Democrats only need four Republicans to join them, yet there are no indications right now they will be able to convince any GOP Senators to break with their leadership.

Still, Schiff on Wednesday made the case for evidence to be brought into the trial.

For instance, notes from first-hand witnesses who listened in on the July 25 call between Trump and the Ukrainian president would help further establish the take-away from the call, perhaps resolve disputes over whether the "favor" Trump sought was part of a quid-pro-quo scheme, Schiff said.

"In any courtroom in America holding a fair trial, you would want to see contemporaneous notes. This Senate should be no different. Demand those notes. Demand to see the truth," he argued.

In Davos, Switzerland, where Trump was attending the World Economic Forum meeting, Trump re-emphasized his view that the impeachment case against him is a "hoax."

"I think it's so bad for the country," he said, adding: "I'd love to go to the trial, sit in the front row and stare at their corrupt faces."

"His counsel might recommend against that," he said with a laugh.

"We're going to respond of course to what the House managers put forward. And we're going to make an affirmative case defending the president," Sekulow said.

The president, who has said he is open to hearing from witnesses in the Senate trial, said Wednesday that that decision was ultimately up to the Senate.

"Personally, I'd rather go the long route," he said.

Wrapping up his lengthy opening statement, Schiff said: "We all, Democrats and Republicans alike, must ask ourselves whether our loyalty is to our party or whether it is to our Constitution."

Earlier, as he met with reporters just before heading to the Senate, Schiff said the managers "will lay out all the facts and chronology," in the coming days.

"We believe we will make an overwhelming case for the president's conviction on both Article 1 and Article 2," he added.

Schiff threw cold water on reports of a deal to allow Hunter Biden, son of former Vice President Joe Biden, to testify in return for a witness Democrats want to hear from, saying this is not "some fantasy football trade."

That stance was echoed later in the day by Senate Minority Leader Chuck Schumer, D-N.Y., who said a witness trade is "off the table."

While Biden campaigned on Wednesday, a voter in Osage, Iowa, asked the presidential candidate if he would appear before the Senate, and Biden flatly ruled it out.

"The reason I would not make the deal, the bottom line is, this is a constitutional issue," he said. "We're not going to turn it into a farce or political theater. I want no part of that."

After Schiff completed his argument, other House managers laid out their case against Trump in the Senate chamber. The charged that Trump withheld nearly $400 million in aid to Ukraine in order to pressure that country's president to open an investigation into Joe and Hunter Biden's involvement in Ukraine.

They say that Trump obstructed Congress by refusing to turn over documents or to allow witnesses to testify in their investigation.

The managers showed video clips from the House impeachment hearings, from Fox News interviews with presidential lawyer Rudy Giuliani and of the president himself, including one during the 2016 campaign, when he invited Russia — "if you're listening" — to find Hillary Clinton's emails.

Democrats also continued to call for witnesses to appear before the Senate, including former national security adviser John Bolton. That issue was at the core of the debate over the trial ground rules on Tuesday — a fight that stretched to nearly 2 a.m. ET.

But Trump also cited "national security" for why he has reservations about testimony from some witnesses Democrats are seeking, such as Bolton. Trump said that Bolton knows too much about his personal conversations with other world leaders and that revealing them in any testimony could hurt the presidency.

It is still possible but unclear whether the Senate will hear witnesses after the two sides have made their opening arguments. A number of GOP senators have expressed support for hearing from some witnesses. It would take four Republican senators voting with the 47-member Democratic caucus to call for witnesses. But that would likely not happen until next week.

On Wednesday, Sen. John Barrasso, R-Wyoming, told reporters the hours of presentations and argument by House Democrats left him unmoved.

"I didn't hear anything new. At all. We were here all day yesterday for about 13 hours. No new material presented," Barrasso said. "It still seems to me that this was an effort by the Democrats in a very partisan way to bring a case against President Trump because they weren't happy with the results of the 2016 election."