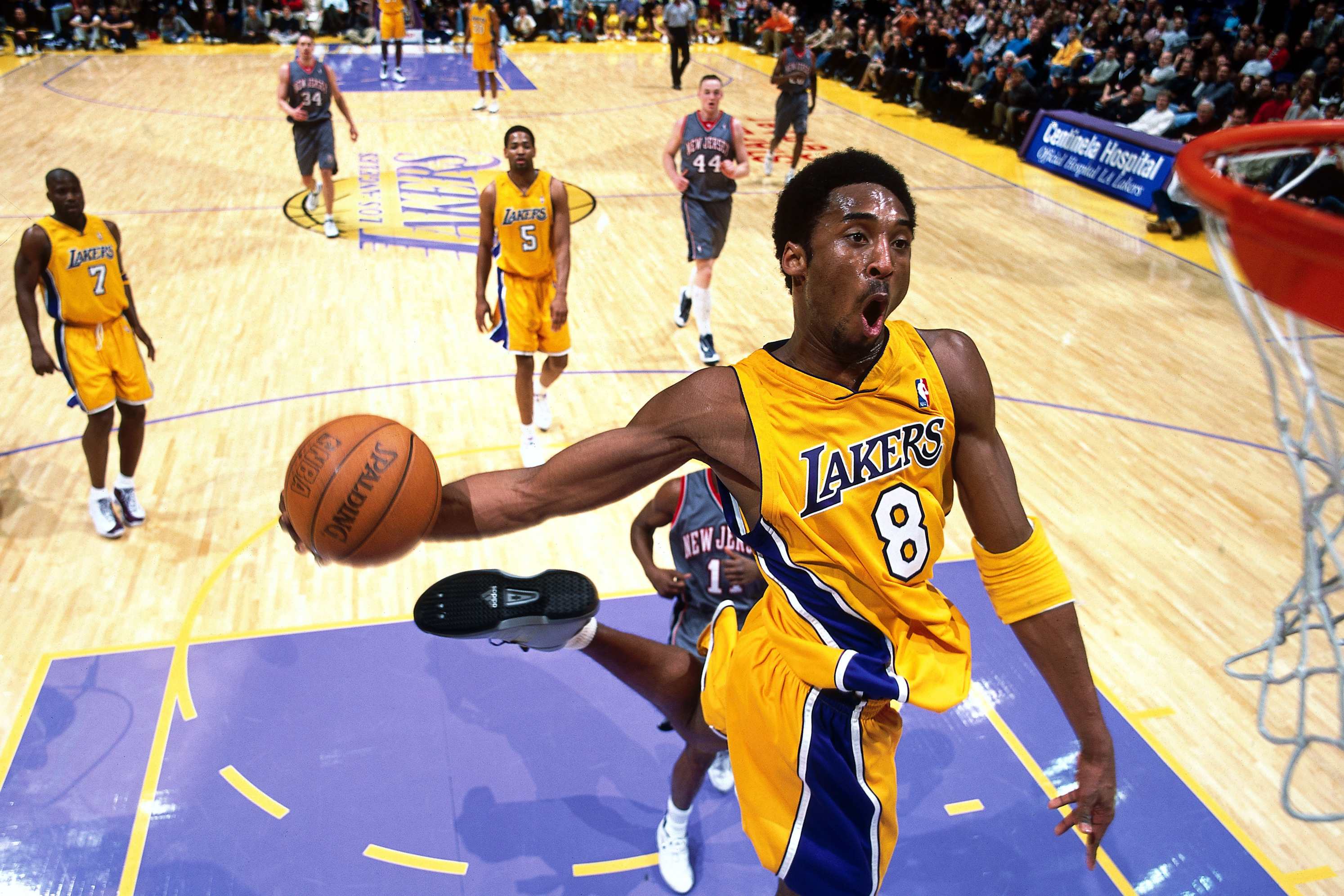 Kobe Bryant goes in for a dunk against the New Jersey Nets during a game at the Staples Center in Los Angeles on Jan. 1, 2001. Photo by Andrew D. Bernstein - NBAE via Getty Images

Basketball legend Kobe Bryant and his 13-year-old daughter Gianna were killed in a helicopter crash on Sunday in Calabasas, Calif., the city's mayor has confirmed. Bryant was 41.

Bryant played for the Los Angeles Lakers for 20 seasons and is considered one of the greatest players in NBA history. Over the course of his storied career he led the Lakers to five championships, was an 18-time All-Star and was the NBA's Most Valuable Player in the 2007-2008 season. He is fourth on the NBA's all-time scoring list and once scored 81 points in a single game, the second-most ever.

Bryant and his daughter were traveling in a Sikorsky S-76B helicopter built in 1991 when it crashed under foggy conditions in the hills above Calabasas. In all, eight passengers and one pilot were killed in the crash, according to Los Angeles County Sheriff Alex Villanueva.

Orange Coast College head baseball coach John Altobelli, his wife Keri and his daughter Alyssa were also among the victims, according to a statement from the college.

"The aircraft went down in a remote field off Las Virgenes around 10:00 this morning. Nobody on the ground was hurt," the city of Calabasas wrote on Twitter. The Federal Aviation Administration and the National Transportation Safety Board are both investigating, the city said.

"For 20 seasons, Kobe showed us what is possible when remarkable talent blends with an absolute devotion to winning," NBA Commissioner Adam Silver said in a statement. "... But he will be remembered most for inspiring people around the world to pick up a basketball and compete to the very best of their ability. He was generous with the wisdom he acquired and saw it as his mission to share it with future generations of players, taking special delight in passing down his love of the game to Gianna."

Across the basketball world on Sunday, words of grief poured in following the news of Bryant's death. Shaquille O'Neal, who won three championships with Bryant while with the Lakers, said there are "no words to express the pain Im going through with this tragedy of loosing my neice Gigi & my brother."

Lakers legend Kareem Abdul-Jabbar, one of just three people to have scored more career points than Bryant, said he "will always remember him as a man who was much more than an athlete."

Bryant's death came just hours after another member of the Lakers, LeBron James, passed him on the all-time scoring list. Bryant scored 33,643 points over his career, but was gracious in being passed by James. In a final tweet, he shared a note of congratulations, calling James "my brother."

A native of Philadelphia, Bryant was born on Aug. 23, 1978. His father Joe played eight seasons in the NBA during the 1970s and early '80s. According to the LA Times, Joe Bryant and his wife Pam Cox decided to name their first son Kobe after the city in Japan.

Bryant was drafted into the NBA from high school at age 17. He was selected by the Charlotte Hornets with the 13th pick in the draft, but then traded to the Lakers, where he spent his entire career. That achievement placed Bryant in what ESPN called "an exclusive club" of players to spend two decades with the same team.

"I think NBA fans are certainly remembering the kind of basketball player Kobe was," NPR's Tom Goldman told Michel Martin on All Things Considered. "He adopted the nickname 'Black Mamba' from the Tarantino movie Kill Bill. It was used as a code name for a deadly assassin known for their agility and aggressiveness, and that is the kind of basketball player Kobe Bryant was. He wasn't like a LeBron James who loves to distribute the ball at key moments. Bryant loved having the ball in his hands, only in his hands in pressure situations, and he mostly delivered in those situations."

Injuries held him back in the final years of his career, with a tear of his Achilles tendon at the end of the 2013 season, followed by a knee injury and rotator cuff surgery. He announced his retirement with a poem, which begins:

"Dear Basketball, From the moment I started rolling my dad's tube socks And shooting imaginary Game-winning shots In the Great Western Forum I knew one thing was real: I fell in love with you. A love so deep I gave you my all — From my mind & body To my spirit & soul."

Despite his achievements on the court, Bryant's life off the court was not without controversy. In 2003, a 19-year-old woman accused him of raping her. He was charged with sexual assault and false imprisonment. The accuser faced intense scrutiny from the media and a campaign from Bryant's defense team to discredit her. The criminal case ended in 2004 after she decided to not participate in the trial.

Bryant and the accuser settled a civil lawsuit out of court in 2005 with no admission of guilt. He released a statement saying he believed the encounter was consensual, "but I recognize now that she did not and does not view this incident the same way I did."

After his retirement in 2016, Bryant spent much of this time working at his production company, Granity Studios. The operation has put out young adult books, a podcast and created the Oscar-winning animated short, Dear Basketball.

He was married to Vanessa Bryant — the two were parents to four daughters.

In retirement, Bryant and his daughter Gianna could occasionally be spotted sitting courtside at Lakers games. In a 2018 interview with Jimmy Kimmel, Bryant said Gianna wanted to play in the WNBA "for sure."

"The best thing that happens is when we go out and fans will come up to me and she'll be standing next to me and they'll be like, 'Hey you got to have a boy, you and V gotta have a boy ... someone to carry on the tradition, the legacy," Bryant told Kimmel. He said Gianna would interrupt and respond, "I got this."