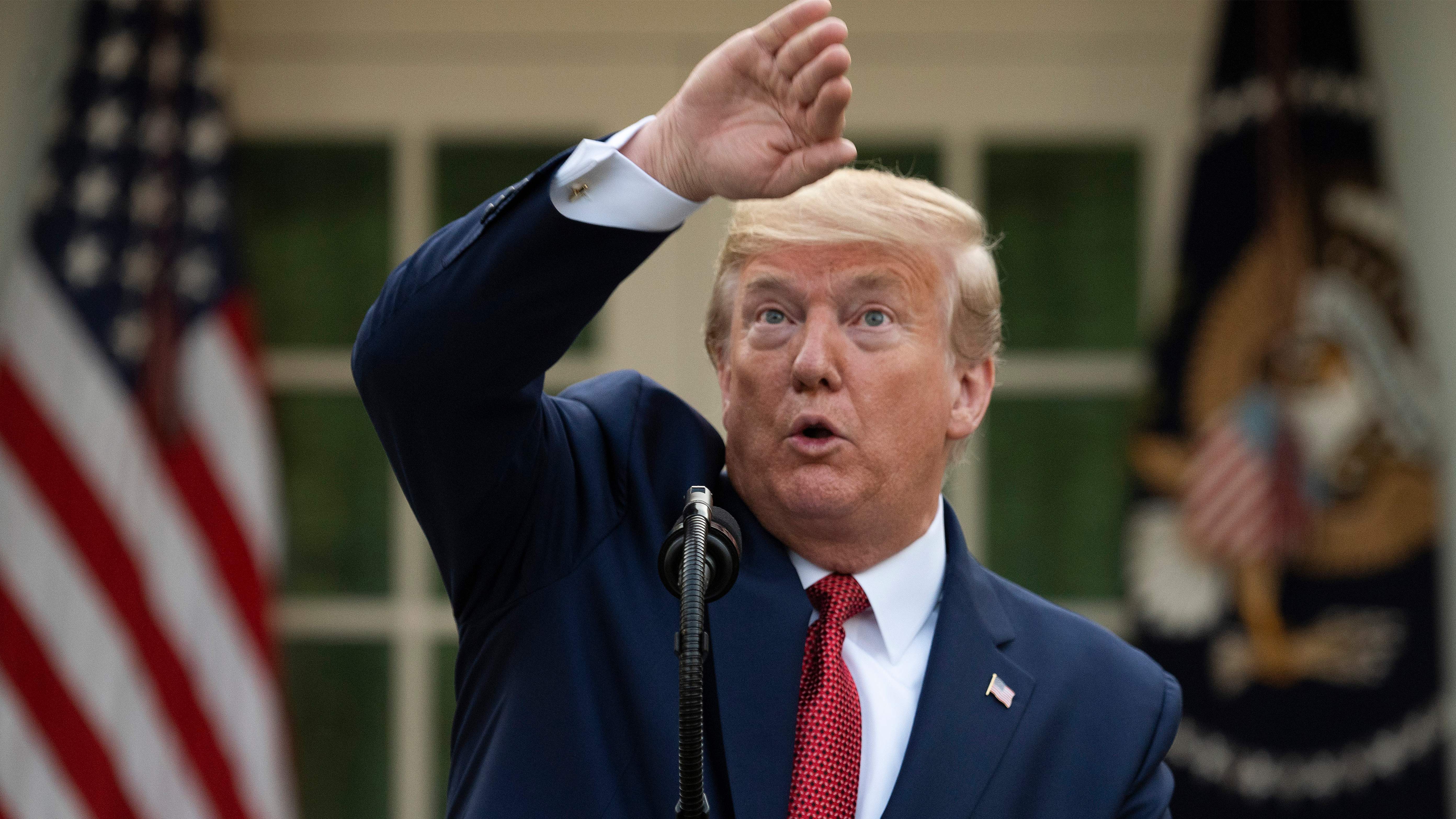 President Trump on Sunday described models showing U.S. coronavirus cases could peak in two weeks — at Easter — a time when he had hoped things would be back to normal for parts of the country. Photo by Jim Watson - AFP via Getty Images

Two weeks ago, President Trump entered the White House briefing room and announced an aggressive plan to slow the spread of the coronavirus.

Stay home for 15 days, he told Americans. Avoid groups of more than 10 people. "If everyone makes this change, or these critical changes, and sacrifices now, we will rally together as one nation and we will defeat the virus," he said.

On Sunday, the night before Day 15, Trump told the country to stick with the plan for another month, until April 30.

"The better you do, the faster this whole nightmare will end," Trump said.

In the beginning, Trump focused on the virus. "We're getting rid of the virus," he said. "That's what we're doing. That's the best thing we can do. By the way, for the markets. For everything. It's very simple. It's a very simple solution. We want to get rid of it."

Trump described the decision to issue the guidelines as "one of the most difficult decisions I've ever made" and said he was skeptical when his medical experts came to him with the plan.

"I wasn't happy about it," he said on Fox News last week. "They came in — experts — and they said, 'We are going to have to close the country.' I said, 'We have never closed the country before. This has never happened before.' I said, 'Are you serious about this?' "

From the start, there were questions of what would happen after 15 days, whether the push for what public health officials call social distancing would become the new normal. "People are talking about July, August, something like that," Trump said.

Then, about a week into those 15 days, Trump's message changed.

He had heard concerns from friends in the business community, conservative economists and others about the economic pain from his measures.

"We have to have a functioning economy and that was the message that we took to the White House, and I think President Trump understood the importance of that. He's a businessman himself," said Stephen Moore, who served as senior economic adviser to Trump's 2016 presidential campaign.

Moore and others wanted the president to send a signal that businesses would be able to reopen, that the shutdowns and social distancing wouldn't go on indefinitely.

"Look, we have to make a very tough calculation here about how much, how long we can keep this economy from functioning, because if we don't, the carnage to our economy — people's lives — might be greater than the health risk of putting people back on the job," Moore explained in an interview with NPR.

"Our ruling class and their TV mouthpieces whipping up fear over this virus, they can afford an indefinite shutdown. Working Americans can't. They'll be crushed by it," Fox News Channel host Steve Hilton said on his show on March 22.

"You know that famous phrase — the cure is worse than the disease — that is exactly the territory we are hurtling towards," Hilton said. "You think it's just the coronavirus that kills people. This total economic shutdown will kill people."

Within hours, President Trump was saying the very same thing.

The next day in the briefing room, Trump had a new message. "Our country wasn't built to be shut down," he said.

"I'm not looking at months, I can tell you right now. We're going to be opening up our country, and we're going to be watching certain areas," he said, suggesting that parts of the country with fewer cases of the virus could resume normal economic activity. "We can do two things at one time."

Then, last Tuesday, Trump came out with what he called "a beautiful timeline."

"I'd love to have it open by Easter," he announced during a Fox News Channel virtual town hall. "Wouldn't it be great to have all of the churches full? You know, the churches aren't allowed essentially to have much of a congregation there."

Public health experts were alarmed, saying April 12 would be too soon to let things go back to normal. And many economists say sending people back to work, before the virus is under better control, would actually do more damage to the economy.

As the end of the 15 days drew closer, the United States became the nation with the most reported cases of the virus, surpassing China.

And Trump stopped mentioning Easter. By March 25, his hometown, New York City, had the most cases and most new cases, and his health experts were telling people who left the area that they needed to self-isolate for two weeks, lest they spread it further.

Vice President Pence, who leads the White House coronavirus task force, said the decision about what to do next would be guided by data, and the country would only reopen in sections, bit by bit, when it could be done responsibly.

As for Easter: "The president expressed really an aspirational goal," Pence said in an interview with CNBC.

Last week, Trump told governors the administration would come up with three risk categories for counties based on test data — data that his own experts have said is not yet uniformly available.

Some of his confidantes told Trump to leave decisions about shutting down activity up to individual governors. "But the president does not want to be the person who is overseeing the shutdown of the United States because of the economic calamity, which is about to transpire based on that decision," said one source who is familiar with Trump's thinking.

But other allies encouraged him to extend his guidelines — or even take a more aggressive approach to contain the virus.

Steve Bannon, who was a top White House adviser before his ouster in 2017, and Jason Miller, Trump's 2016 campaign communications director, used their podcast and radio show to urge a 30-day national lockdown.

The calculation — you can't fix the economy until you fix the virus — was the very message Trump himself was delivering two weeks ago. A recent Morning Consult poll finds nearly three-quarters of American voters support a national quarantine.

By Friday, Trump was showing signs of frustration, lashing out at critics like two Democratic governors he said had not shown enough appreciation for the federal response.

He expressed amazement that the streets of New York City were empty, and dismay about conditions at Elmhurst Hospital in Queens. He prepared to send off a Navy hospital ship to provide extra hospital capacity for his hometown. And he again recalibrated his message.

Throughout the two weeks, Trump's top medical advisers on the coronavirus task force had steadfastly avoided publicly discussing numbers from models such as one from Imperial College London, which predicted that as many as 2.2 million Americans could die from the virus unless strict social distancing measures were taken.

But on Sunday morning, immunologist Anthony Fauci, one of Trump's top advisers on the crisis, went on television and said 100,000 to 200,000 Americans could die from the virus.

Fauci and Deborah Birx, the White House task force coordinator, had reviewed a dozen models and used data to make their own projections, which Birx said aligned with estimates from Christopher Murray of the University of Washington's Institute for Health Metrics and Evaluation.

"Dr. Birx and I spent a considerable amount of time going over all the data, why we felt this was a best choice for us, and the president accepted it," Fauci told reporters.

Trump said he asked them about his plans to reopen parts of the country that had been less affected by the virus. "I said, 'How about Nebraska? How about Idaho? How about Iowa?'

"I was given a pretty strong look by these two people. They said, 'We don't like that idea.' So, you know, we're relying on them," he said.

The ultimate decision showed that the models and projections had given Trump pause, said Miller, his former adviser.

"It's very clear that President Trump has seen certain models and certain growth projections that gave him great pause," said Miller. "I think there's a collective sigh of relief and appreciation for the decision that was made tonight."

As for Easter, Trump reiterated that the date had been aspirational all along. "The peak, the highest point, of death rates, remember — this is likely to hit in two weeks," he said, a date that happens to be Easter.

Numerous Trump allies and advisers told NPR in recent days that Trump is keenly aware that his own political fortunes now hinge on how he handles the coronavirus.

Before the pandemic, Trump had staked his reelection campaign on the strength of the economy. "I mean, I was presiding over the most successful economy in the history of the world. And now we're going to have to rebuild it," he said on Friday.

But come November, his advisers say what will matter the most is that the crisis is contained and the economy has turned a corner.

"In times of crisis, results count," said Ed Brookover, a former senior adviser to Trump's campaign. "If he does a good job, he'll deserve and win reelection. If things are tougher, then there will be — a different set of decisions that have to be made."