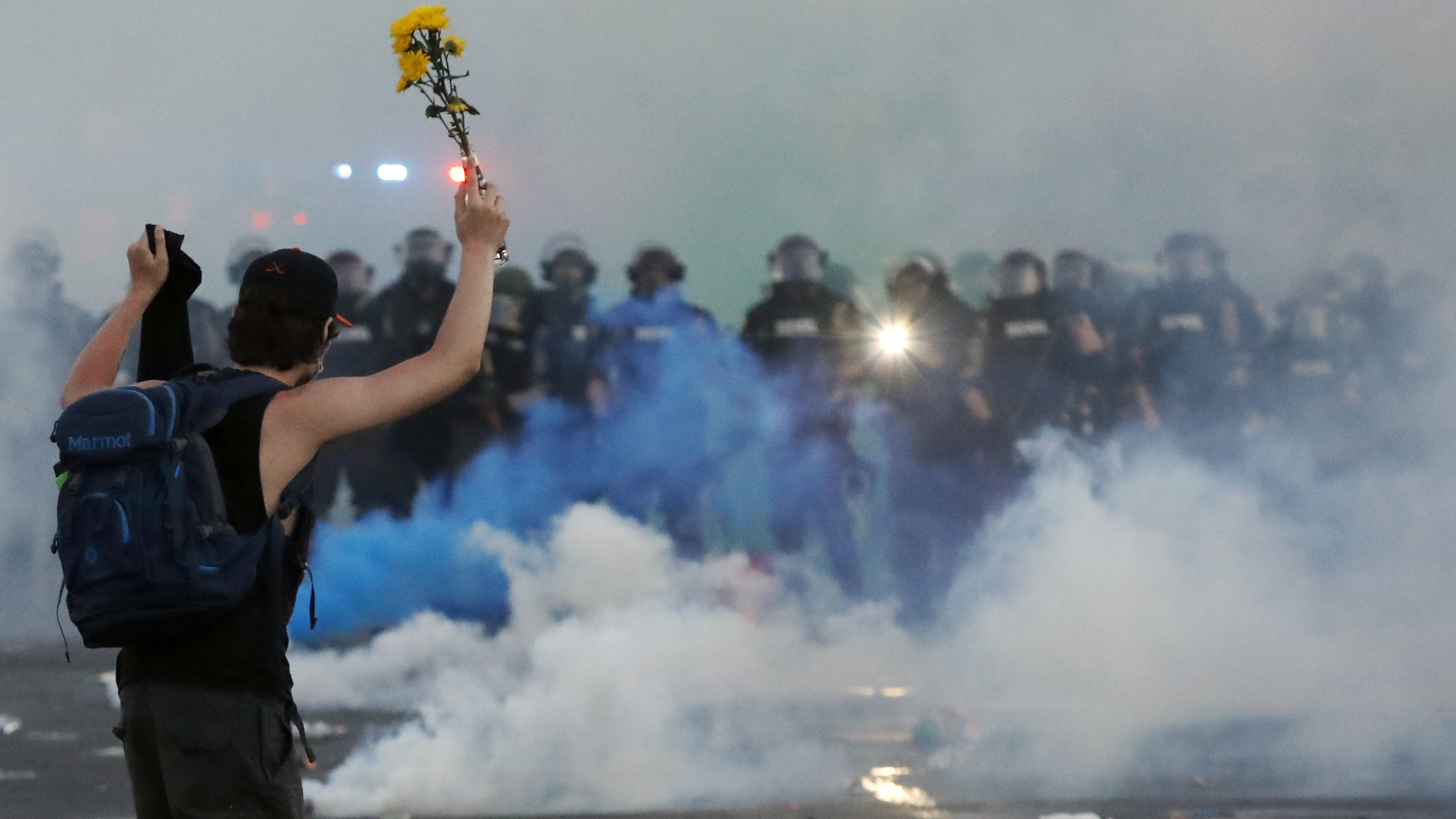 Police move towards a protester after curfew Saturday, May 30, 2020, in Minneapolis. Photo by John Minchillo - AP

Police and demonstrators clashed in dozens of cities across the U.S. on Saturday during another night of protests in response to the death of George Floyd.

At least one person is dead after being shot in Indianapolis. Police are investigating whether the incident was connected to demonstrations in the city.

In Los Angeles, protesters blocked the 110 freeway downtown and were seen breaking windows of stores at The Grove mall.

Floyd, 46, died after being arrested in Minneapolis on Monday. A video shows a police officer kneeling on his neck for at least seven minutes while Floyd is heard saying he cannot breathe. That police officer was arrested Friday and charged with third-degree murder and manslaughter. Three other officers were present but have not been charged. All four were fired.

Overnight curfews were enacted in cities nationwide — including Chicago, Atlanta, Los Angeles, Louisville, San Francisco and Denver — as authorities sought to stem any violence. The National Guard was also activated in several states, including Texas, Georgia, Washington, Ohio and Kentucky.

In Minneapolis, authorities reported a ratcheting down of the previous night's unrest after an influx of National Guard troops and state troopers were dispatched to the city.

"Clearly we did not have the numbers in [Minneapolis police] alone," the city's mayor, Jacob Frey told Minnesota Public Radio early Sunday. "Additional force was necessary."

Law enforcement began to make arrests in Minneapolis after an 8 p.m. curfew as crowds gathered at the 5th Precinct police building.

Paul Schnell, the state corrections commissioner, said at a Saturday night press conference that an official count of arrests was not yet available but that authorities were "committed to do whatever it takes to bring order."

"Protesting such brutality is right and necessary. It's an utterly American response," he wrote. "But burning down communities and needless destruction is not."

Biden added, "the act of protesting should never be allowed to overshadow the reason we protest."

At least one person has died after being shot in downtown Indianapolis Saturday night. Police Chief Randal Taylor said at a press conference that authorities were still investigating the incident's connection to ongoing demonstrations in the city.

"Downtown is not safe at this time," Taylor said. He urged residents who do not live in the area to leave.

Mayor Joe Hogsett called the day's protests "successful" in a tweet, but condemned the "small group of people" that grew violent later in the night.

Several videos of protests in New York showed a police patrol vehicle driving through crowds of protesters. Protesters are seen surrounding and throwing debris at a car while another one drove into them.

Mayor Bill de Blasio called the footage "upsetting" at a late night press conference Saturday but said it was "inappropriate for protesters to surround a police vehicle and threaten police officers."

He addressed the city's peaceful protesters, saying they were heard but urging them to go home.

"We hear your desire to see these issues: relationship between police and community, the need for justice, the need for real change in our society," he said. "We appreciate and respect all peaceful protests, but it is now time for people to go home."

The LAPD said hundreds of protesters were arrested amid the protests. An unlawful assembly was declared in the the Mid-Wilshire area and businesses were asked to close. Protesters blocked the 110 freeway in downtown LA and videos taken at protests showed looting and broken windows at stores in The Grove mall.

Garcetti urged protesters to "take a breath" and "step away" at a press conference. He asked residents to go home and protest peacefully at a later time.

Gov. Gavin Newsom announced the National Guard would be deployed to Los Angeles and proclaimed a state of emergency in Los Angeles County.

In Washington, National Guard troops were called in Saturday night to assist police and Secret Service officers in blocking off the White House after a day of confrontations between law enforcement and protesters.

Demonstrators flocked to the White House and nearby Lafayette Square throughout the afternoon where city and U.S. Park police and the Secret Service maintained barricades and pushed back against protesters, at times using pepper spray in an attempt to disperse crowds.

Fireworks were set off and at least one car was set on fire.

Buildings in downtown Washington had windows smashed — including the Ronald Reagan Presidential Foundation and Institute and an Apple store. A liquor store and a T-Mobile were also looted as tensions remained high through the early morning.

The D.C. police union tweeted that one of its members had been hospitalized after being hit by a rock.

Bowser fired back at Trump at a Saturday press conference, saying the president's warning that "ominous weapons" and "vicious dogs" awaited any protester who made it past the White House fence was "no subtle reminder" of the country's history of segregationist violence.

On Sunday morning, Bowser reiterated that sentiment on NBC's Meet The Press.

This is a developing story. Some things reported by the media will turn out to be wrong. We will focus on reports from officials and other authorities, credible news outlets and reporters who are at the scene. We will update as the situation develops.