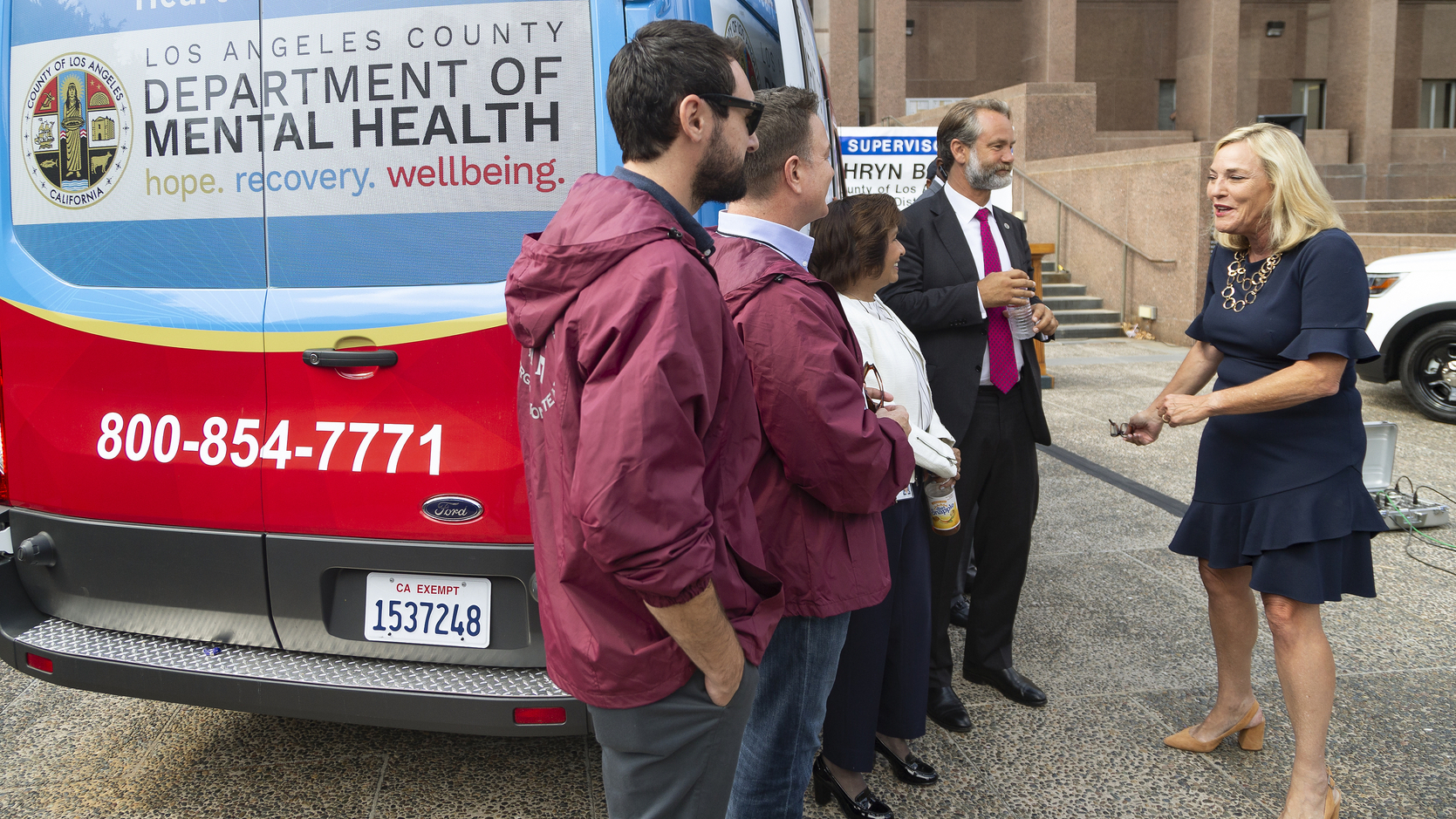 Los Angeles County last fall unveiled one of its 10 Department of Mental Health vans aimed at, among other things, reducing long waiting periods for the transport of individuals experiencing a mental health crisis. Photo by Damian Dovarganes - AP

There are already federal and state laws on the books requiring insurance companies to cover mental health treatments, just as it does medical treatments and procedures such as chemotherapy or a cesarean section. But many patient advocates say those laws haven't gone far enough because they permit insurance companies to pay for care only after the mental illness has reached a late-stage crisis, or let companies deny coverage outright. So states, including New York and Illinois, have been strengthening their regulation and enforcement.

This week, California's legislature passed one of the nation's strictest mental health parity bills. It aims to increase mental health insurance coverage to include far more conditions — including, notably, addiction — as well as redefining the criteria for insurance denials.

Monica Vera-Schubert says such rules would have saved her a lot of anguish a decade ago, when a painkiller prescription for her son Bobby's knee injury quickly turned into a full-blown addiction to opiates.

"All of a sudden, his behavior started changing to the point that he was no longer a friendly, happy-go-lucky kid," says Vera-Schubert. She's a pharmacist, but it still took her awhile to recognize what was happening. He raided his grandparents' medicine cabinet and his mother's jewelry box to feed his growing addiction. His drug dealer went to his high school.

Where Vera-Schubert lives, in Burbank, Calif., state laws as well as federal already require insurance companies to cover mental health as they do medical care. Even so, she encountered multiple hurdles to get coverage for her son's visits to rehab or for medication. Often, she had very narrow windows of time between her son agreeing to go to treatment, and getting him checked in, she says. Once, her insurance pre-authorized her son for inpatient rehabilitation treatment, but when he showed up, the paperwork had not been filed. He waited several hours in the lobby. Then left.

"My son walked," says Vera-Schubert, who was then tormented by fear she might lose him before he got treatment. "He walked home to his grandparents house and he goes, 'I'm never going back there again.' "

She says her private insurance put up other roadblocks as well: long waiting periods; requirements that couldn't get help unless he tested positive for drugs. Paying for the inpatient rehab out of pocket would have cost her nearly $50,000 for a 28-day stay.

"It felt terrible and overwhelming," she says, sobbing. "So overwhelming how many times I had to fight for my son."

Bobby Schubert, now 25, eventually received treatment and entered recovery just over a year ago but only after receiving advice to get off his mother's private insurance plan and get on Medi-Cal, California's public Medicaid program.

Scott Weiner, the California senator who introduced the bill, says it's critical to focus on preventative care.

Meanwhile, the insurance industry says the bill California's legislature passed Sunday is a misguided effort to fix the wrong problem.

In a statement, the California Association of Health Plans says that arguments that mental health treatment isn't already on par with medical care in terms of insurance reimbursement "couldn't be further from the truth" and that language in the bill could end up limiting treatment options. It says meeting growing demand for care will require an investment in a bigger mental health workforce, among other things, which the bill does not address.

America's Health Insurance Plans, national association, also has argued that the bill the legislature has proposed is unnecessary and would add to administrative costs. It says the industry is already in compliance with the law.

"The fact is that they are not covering it," Kennedy says, "and it's discriminatory to people who are suffering from mental illness and addiction — especially at a time when our country is crying out" via an epidemic of overdoses and suicides.

Kennedy says the California bill — if signed into law — could become a model for other states, and prompt insurance companies to change policies nationally.

Disputes over mental health parity are also playing out in court.

"The biggest tool insurers have to deny claims is to say treatment is not 'medically necessary,' " says Meiram Bendat, who is both the plaintiff's co-counsel on that case and a Los Angeles-based psychotherapist.

Bendat says the new California proposal would address one gaping problem: It would no longer allow insurers to write their own rules about what to cover. It would also create incentives for insurers to expand the network of therapists, counselors and psychiatrists that take their insurance.

He says many of the patients he represented were denied inpatient addiction treatment. "They couldn't afford the care; they didn't get the care; they overdosed and died. And there is absolutely no ability to get punitive damages," he says, because that was not a remedy under federal law. Without that, says Bendat, insurers had little incentive to change their practices.

The bill passed by the legislature is now on California Gov. Gavin Newsom's desk, and he has 30 days to sign it. His office declined to comment to NPR about whether or when he intends to sign it into law.