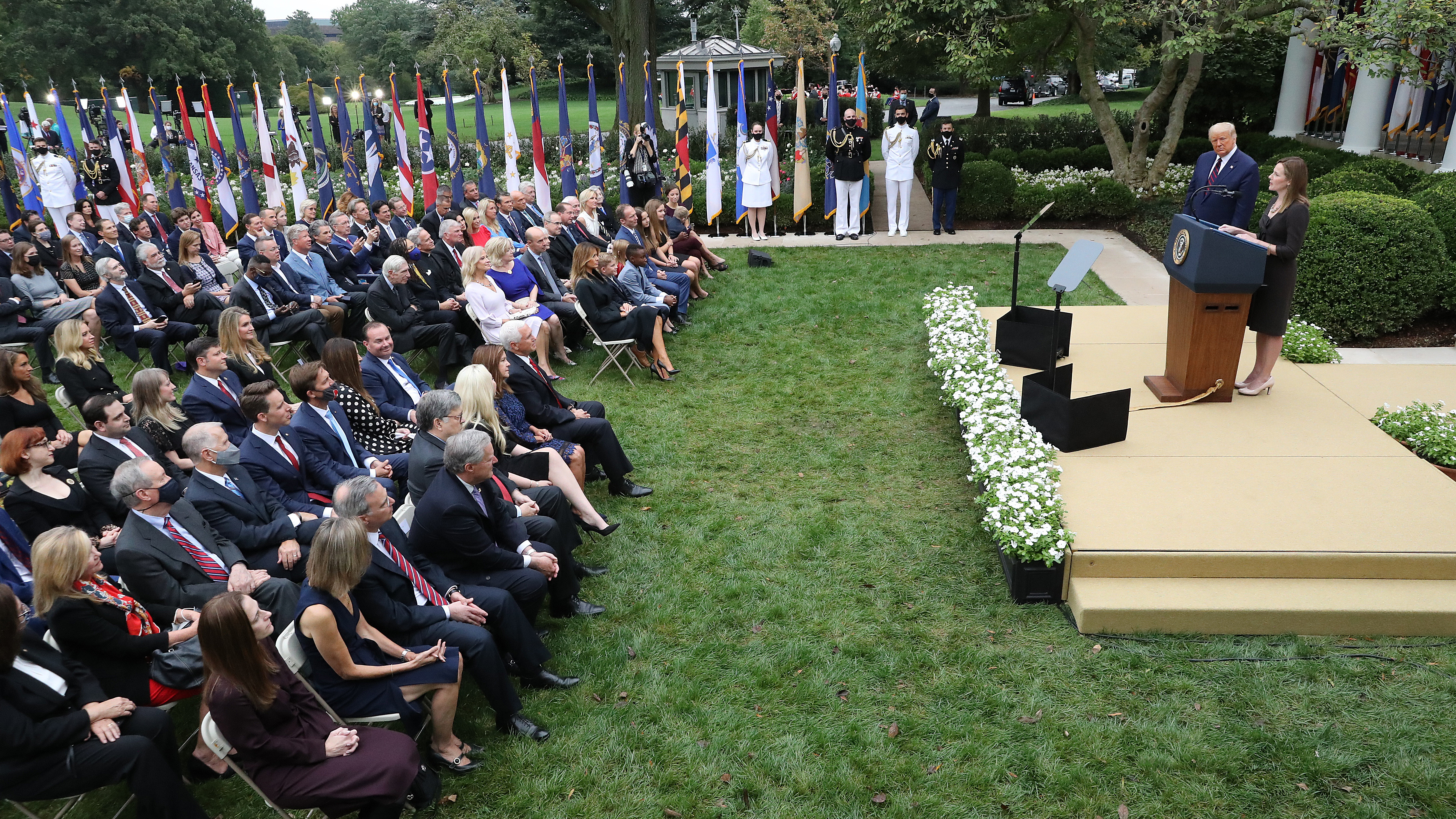 Judge Amy Coney Barrett speaks after U.S. President Trump formally announced that she will be his nominee to the Supreme Court in the Rose Garden at the White House. Photo by Chip Somodevilla - Getty Images

A week ago, more than 100 people gathered in the White House Rose Garden to celebrate President Trump's third nominee to the U.S. Supreme Court, Amy Coney Barrett. Guests mingled, hugged and kissed on the cheek, most without wearing masks. An indoor reception followed the outdoor ceremony.

Seven days later, at least eight people who were at the ceremony have tested positive for the coronavirus, including a journalist who was covering the event. Several more of the president's closest aides and advisers have also tested positive.

Here are the officials and lawmakers who attended who have tested positive:

The president and first lady

President Trump announced early Friday that he and first lady Melania Trump had tested positive. In introducing Barrett and pledging a swift confirmation in the Senate, the Trump campaign appeared to be finally making progress toward shifting the focus of the campaign away from the coronavirus.

Less than a week later, the president would fly to Walter Reed National Military Medical Center for treatment after his own diagnosis. Barrett tested negative on Friday.

Trump's now former senior adviser sat toward the front. She tested positive on Friday and said her symptoms are mild. Conway also reportedly participated in debate preparations inside the White House this week.

Sen. Mike Lee announced a positive test result on Friday. He was seen hugging and kissing other guests and not wearing a mask at the event.

The Utah Republican is also a member of the Senate Judiciary Committee and met with Barrett earlier this week, again without masks. Lee says he will isolate for 10 days.

Sen. Thom Tillis, R-N.C., also received a positive test on Friday. Republican members of the Senate Judiciary Committee attended the Rose Garden announcement. Tillis wore a mask during the ceremony, but several of his colleagues did not.

Tillis participated in a Senate debate in North Carolina on Thursday.

Sen. Ron Johnson, R-Wis., has also tested positive. He is not on the Judiciary Committee and did not attend the Rose Garden event.

Notre Dame President the Rev. John Jenkins attended Saturday's event to celebrate Barrett, an alum who taught for 15 years at Notre Dame's law school. After testing positive, he said in a statement that he "regrets his error in judgement" in deciding not to wear a mask.

Former New Jersey Gov. Chris Christie, who was also at last Saturday's event, says he has tested positive and will be receiving medical attention. He, like many guests at the event, did not wear a mask and was photographed in close proximity greeting senior White House officials and Attorney General William Barr. A Justice Department spokesperson said Saturday that Barr has been tested twice and that both times, the result was negative.

Later Saturday, Christie said he had checked into the hospital, in consultation with his doctors. "While I am feeling good and only have mild symptoms, due to my history of asthma we decided this is an important precautionary measure," he tweeted.

Three other officials close to the president have also tested positive this week.

Hope Hicks, one of the president's closest aides, tested positive on Thursday. Her positive diagnosis appears to have spurred the president to get tested on Thursday night. Hicks felt unwell after a campaign event Wednesday night and attempted to isolate on the Air Force One flight back to Washington. She did not attend the Rose Garden event.

Ronna McDaniel, the chairwoman of the Republican National Committee, has also tested positive. The RNC says McDaniel has been home in Michigan for the past week.

In a previous version of this story, we incorrectly said Kellyanne Conway sat in the front row at the Rose Garden event. Pictures show her seated in the second row. In addition, the story said Sen. Mike Lee received a positive test result on Friday. Actually, he announced on Friday that he had tested positive the day before. In an earlier caption, we incorrectly referred to Sen. Deb Fischer as Rep. Deb Fischer.