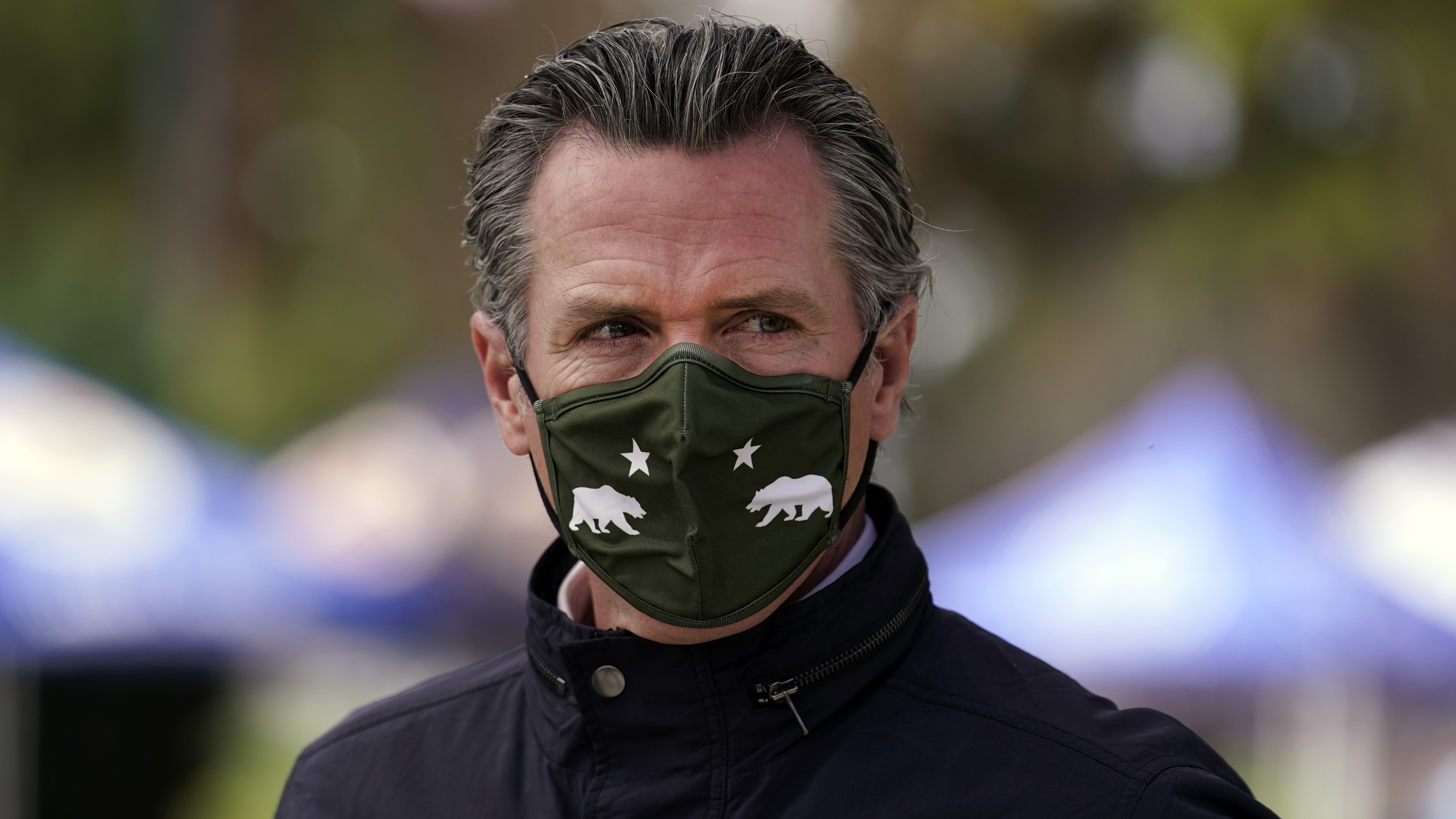 California Gov. Gavin Newsom, pictured on March 10, has come out swinging at Republicans leading the charge to remove him from office in a recall bid. Photo by Marcio Jose Sanchez - AP

"I won't be distracted by this partisan, Republican recall — but I will fight it," Newsom proclaimed in a tweet on Monday morning, adding, "There is too much at stake."

"Getting Californians vaccinated, our economy safely reopened, and our kids back in school are simply too important to risk," Newsom said.

The governor's remarks come just two days before a deadline to submit the nearly 1.5 million signatures required to trigger a recall election. (The only requirement to get the question on the ballot is to obtain the signatures of 12% of voters in the last election for the office.)

That is a milestone the RecallGavin2020 Committee said it surpassed on Wednesday. In a statement, the group's chairman, Orrin Heatlie, said more than 2 million signatures had been collected and "1,871,573 signatures have been pre verified internally through an outside third party vendor."

If the signatures are validated, Californians will likely be asked to vote on keeping or removing Newsom late this year, with a simple majority needed for the recall.

It would be only the second gubernatorial recall in the state's history. But it is the sixth such campaign against Newsom since he was reelected in a landslide victory in 2018. The others have failed to reach the signature threshold.

Newsom has been reticent about addressing the latest barrage of political threats, often deflecting questions by speaking of his administration's efforts to stem the COVID-19 pandemic and focusing on vaccination strategies. However, his tone on Monday on Twitter and in a separate political campaign email was markedly different, denouncing his detractors.

"I am not going to take this recall attempt lying down," he declared.

"And let's call it what it is: it's a partisan, Republican recall — backed by the [Republican National Committee], anti-mask and anti-vax extremists, and pro-Trump forces who want to overturn the last election and have opposed much of what we have done to fight the pandemic," Newsom wrote.

The state's Democratic Party is kicking in $250,000 to help Newsom fend off the recall — a sum that matches a contribution to his opponents by the national Republican Party.

"The Republican National Committee, wealthy Trump donors and right-wing extremists have joined forces to disrupt California's road to recovery," Democratic state party chair Rusty Hicks said in a statement. "Despite the efforts by the GOP to take us back to some of our darkest days, CADEM is prepared to mobilize our grassroots people power and make it clear to voters that the Democratic Party is the only party focused on protecting the health and safety of all Californians and their families."

On Monday, a coalition of national and state Democrats rallied around Newsom, including Sens. Elizabeth Warren of Massachusetts, Cory Booker of New Jersey, Alex Padilla of California and independent Sen. Bernie Sanders of Vermont.

"Right-wing Republicans in CA are trying to recallGavin Newsom for the crime of telling people to wear masks and for listening to scientists during COVID," Sanders said in a statement. "Extremist Republicans have done enough to undermine democracy already. We must all unite to oppose the recall in California."

The petition to unseat Newsom kicked off on June 10 — well before the pandemic crisis nearly brought the state's health care system to its knees. That's when former Yolo County law enforcement officer Heatlie — who says he wants to remove the governor for his role in skyrocketing housing prices, record homelessness, rising crime and pro-immigrant legislation — got started collecting 1.5 million signatures. Under state law, that started a 160-day clock, ending on Nov. 17.

But, as the Sacramento Bee reported, "by October, the recall campaign was seeking an extension, arguing that the pandemic had made it too difficult to collect signatures." Ultimately, a judge ruled in favor of the extension.

Critics of the recall say that allowed the anti-Newsom movement to capitalize on the growing discontent and plummeting approval ratings of the governor as thousands of people died, businesses collapsed, schools and churches remained shuttered and millions grew fatigued by strict social distancing measures.

"This thing got started before the pandemic," Newsom told KQED in an interview Friday. "Look at the petition that's out on the streets."

Heatlie on Monday told NPR Newsom is not wrong. It is about those things.

More than any other cause, he said he was prompted to find a replacement as quickly as possible by the overwhelming homeless problem, adding that, "I know that's not Gavin Newsom's fault."

But he says a root cause of the current housing crisis is a series of propositions passed by voters and championed by Newsom. "All of those reformed the judicial system and reorganized the prisons and county jail systems, which were already overwhelmed."

The transfer of nonviolent inmates serving three to five years from prisons to county jails was the beginning of the end, Heatlie said. Then, when the coronavirus struck and those inmates were released from the county jails, "where they had access to counseling, job training, education and drug rehab, they were stripped of those services overnight."

Heatlie also says Newsom is responsible for squandering millions in taxpayer dollars "to buy food and clothing" on immigrants who enter the country illegally. "I am not anti-immigrant," he said. "I am pro-Californian."

He doesn't deny charges that some of the recall supporters include white supremacists and members of the alt-right. Healtie also acknowledges that they may be drawn to the cause based on the call to rollback voter-approved measures benefiting immigrant communities. But he says supporters also include registered Democrats who have not broken with the party but don't want to see Newsom stay in place.

One is even an outspoken "Bernie-crat who is a socialist democrat," he said.

While two Republicans have stepped forward, indicating they'd like to step into the governor's shoes, Heatlie says he cannot endorse either.

Republican John Cox, who lost to Newsom 62% to 38% in 2018, said he'll run if the recall petition qualifies. So far, he has donated $50,000 to the recall campaign, CalMatters reported.

Former San Diego Mayor Kevin Faulconer has also stated he'd like to run for the job.

A new poll released Monday by Emerson College found 42% of California voters would vote to keep Newsom in office, while 38% would vote to recall him.

Spencer Kimball, director of Emerson Polling, noted the governor's Achilles heel is his management the COVID-19 pandemic as well as the economy. The poll found 45% approve of Newsom's handling of the pandemic, while 44% disapprove.

'It has to stop': Biden takes initial action on guns, calls on Congress to do more NPR Apr 8

LA County plans to take in migrant children, but some activists are concerned Greater LA Apr 15