Combat vet on bias against women in the Marines

Kate Germano led the military’s only all-female recruit battalion. Under her watch, the women shot better, ran faster, and had fewer injuries. But then she was fired in 2015. She said it had to do with her taking a stand, and confronting gender bias and lowered expectations for women. 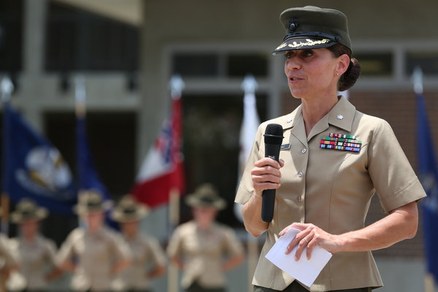 Gender bias in the Marine Corps

Trump’s EPA wants to roll back greenhouse emissions rules, an issue that California led the way on. But does the federal government have the power to overrule California’s...

Combat vet on bias against women in the Marines

Kate Germano led the military’s only all-female recruit battalion. Under her watch, the women shot better, ran faster, and had fewer injuries. But then she was fired in 2015.

Spielberg takes on gaming with 'Ready Player One?'

Our critics review “Ready Player One,” a blockbuster set in a dystopian future where people try to escape to a virtual reality game; “Acrimony,” starring Taraji P.

MLB's opening day and the start of the Final Four

The Dodgers and Angels both stumbled out of the gate on Thursday -- as baseball got underway. The NCAA men’s basketball tournament is on -- with the Final Four facing off...

END_OF_DOCUMENT_TOKEN_TO_BE_REPLACED
KCRW's Pledge Drive: IF we can raise $25,000 TODAY, your donation will be matched dollar-for-dollar thanks to a generous commitment from KCRW Board Member Norris Bishton and Debra Bishton.
GIVE NOW
Give Now