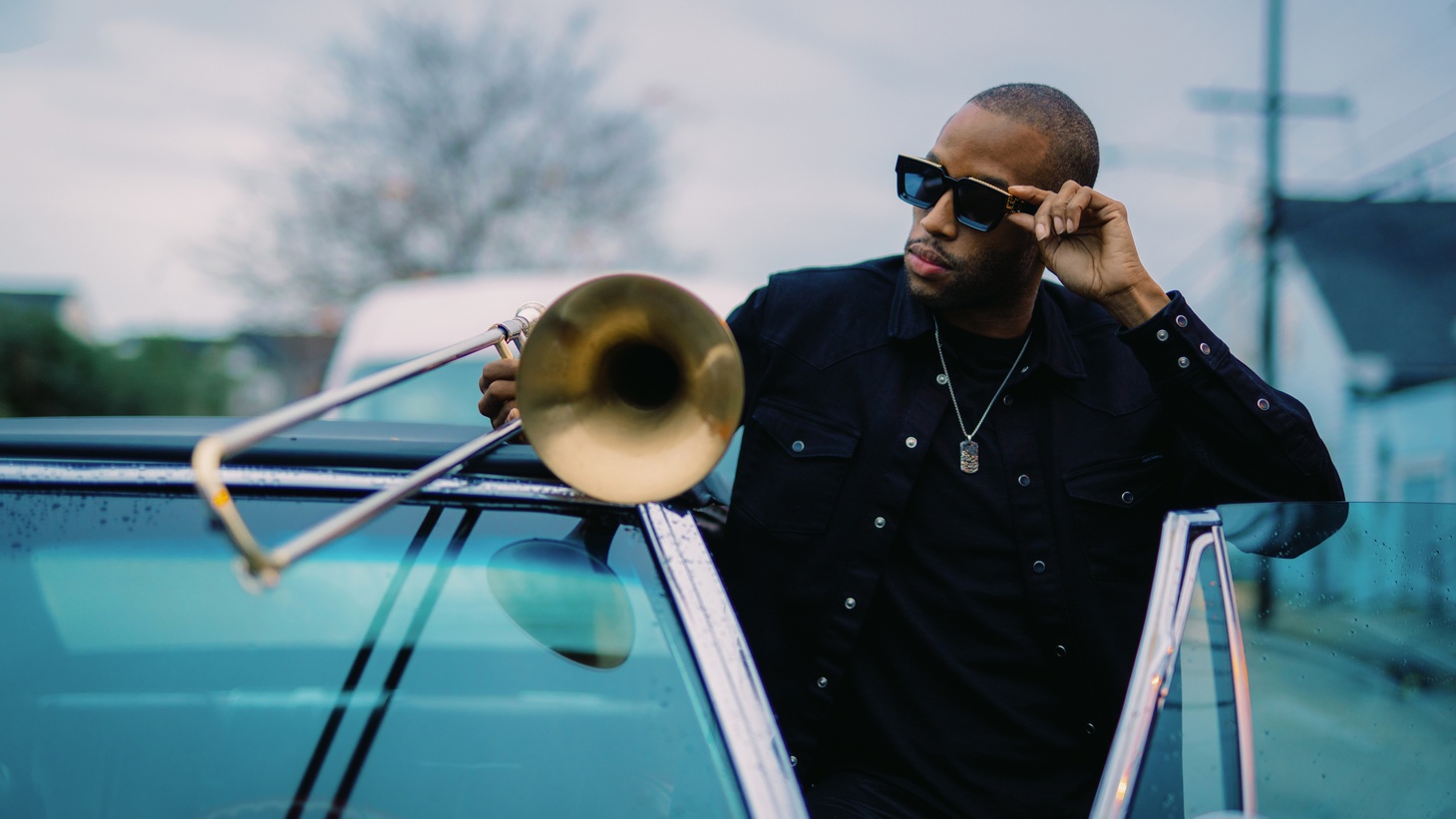 “I just took music very serious. … I was always open-minded and always willing to learn, and go find different things that I had no idea about,” says Troy Andrews, aka Trombone Shorty. Credit: Justen Williams.

Jazz musician Troy Andrews, aka Trombone Shorty, is out with a new album called “Lifted,” which is inspired by New Orleans. He grew up surrounded by music in the Tremé neighborhood, marching through the streets in brass band parades as a kid. In 1990, at age 4, he played at the New Orleans Jazz and Heritage Festival, thanks to Bo Diddley bringing him to the stage. Earlier this month, he closed out that same festival.

Today, Trombone Shorty is a cultural staple of New Orleans. He’s worked with Ringo Star, Lenny Kravitz, Bruno Mars, and numerous other stars. He’s also played at the White House and all over the world. His new album is called “Lifted.”

Trombone Shorty tells Press Play that until he was a teenager, he thought everyone everywhere was surrounded by music in their neighborhoods, and that it was just normal to play songs.

He was born into a family of musicians. His grandfather, Jessie Hill, wrote songs in the 1960s, including the hit “Ooh Poo Pah Doo.” Trombone Shorty’s career got started thanks to his brother, James Andrews, who took him all over the world and gave him his stage nickname.

“Even though I'm much taller than my horn now, everybody still calls me that [Trombone Shorty]. I go by that. We have — may you rest in peace — Tuba Fats (Anthony Lacen). And everybody has a nickname here [New Orleans].”

He says many of his younger family members, particularly cousins, play across New Orleans, but they don’t get a chance to perform together unless it’s at a funeral. And he wants to change that so they all can perform in celebration of life and music.

Trombone Shorty emphasizes that whenever he plays music now, it’s a tribute to his mother Lois Nelson-Andrews, who passed away last year.

“She never traveled. She’s never been on a plane. So she will always live through me whenever I travel around the world. So I always had my road manager take videos of us on stage all over the world. So I can send it to her, she can see where we were and how many people we were playing in front. And just try to make her proud.”

He says his worldwide success became mind-blowing to her. “What I'm doing today, I don't think that the people in my neighborhood or my mom, they haven't seen anything like that. … ‘I just thought that you would be a regular brass band musician’ — that's what she told me. So for her to see the things that I'm doing today, it was unbelievable how excited she was because she never saw that far.”

How did Trombone Shorty become bigger than the other musicians in his family and community? He says he knew at an early age that natural talent could only take him so far. So he got an education at the New Orleans Center for Creative Arts.

“I just took music very serious. … I would call my teachers at any time at night and just continue to learn. And then out of high school, I joined Lenny Kravitz’s band, and then that took my mind to a different level. So I think the most important thing is that I was always open-minded and always willing to learn, and go find different things that I had no idea about.”

Trombone Shorty is passing down his knowledge too. His Troy Andrews Academy teaches music to students every Monday.

“I realized after the storm, after Katrina, that I may be one of the only people left that grew up with that type of musical community. So I just wanted to make sure that other kids … can see my experience. … I created the foundation and the academy. So not only do we teach them music, we teach them audio engineering, we teach them the music business too.”

He adds, “More people in New Orleans are cherishing the culture because they realize now that it doesn't happen anywhere. So whenever we do a second-line parade, or we have some type of celebration with music, you'll see people come in record numbers. Because it just took something like that [Hurricane Katrina] for those people to realize that this is a special magical city, and it's not everywhere.”

Trombone Shorty will perform at the Hollywood Bowl on August 10.