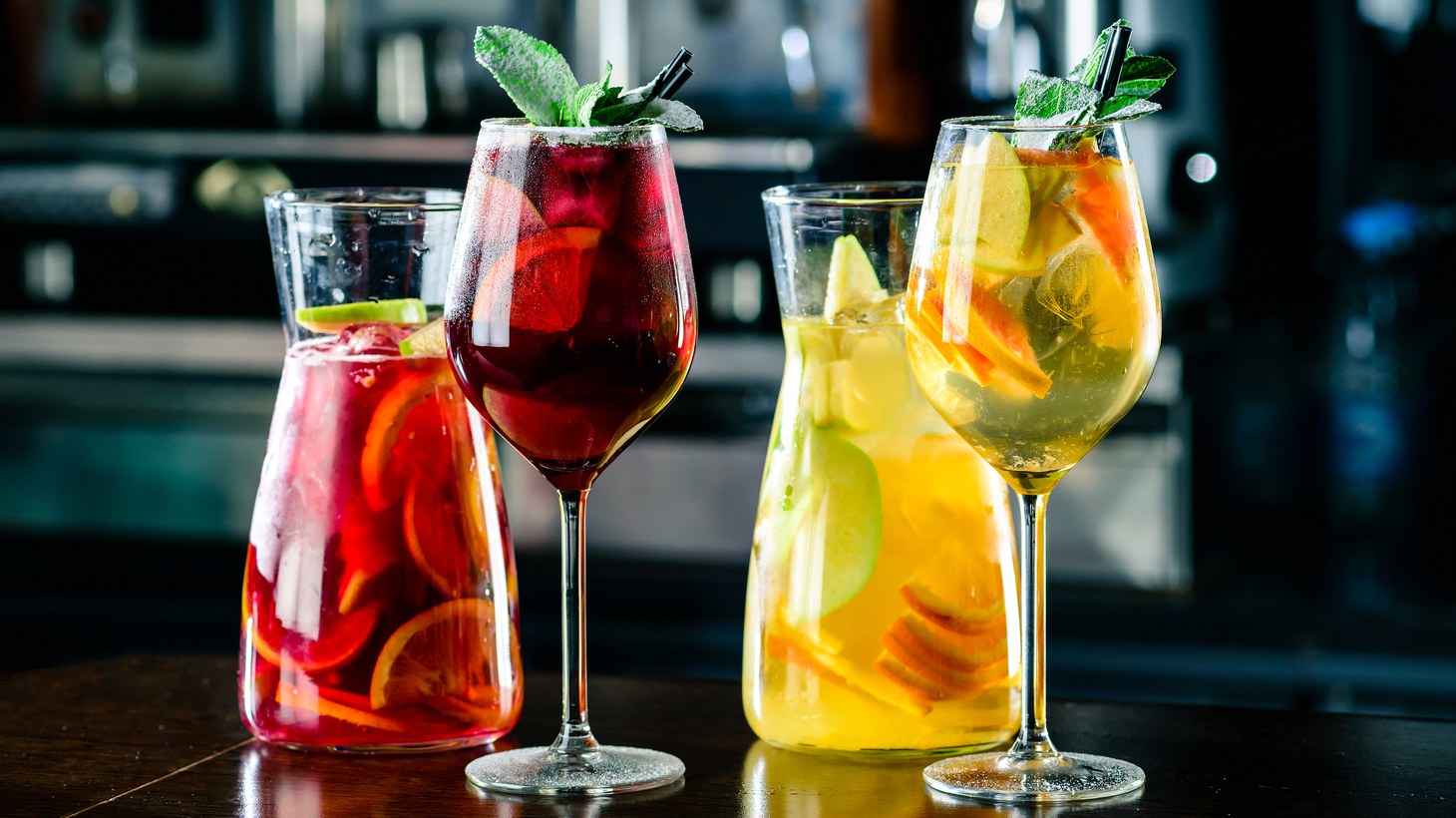 Pitchers of red and white sangria quench the thirst of summer. Photo by Shutterstock.

When you think about alcoholic punches, sangria has to be at the top of the list. The combination of wine, fruit, and a strong distillate has a long history. It probably dates back to when water was so laden with disease in tightly-packed communities, people drank fermented spirits instead, often flavored with herbs and spices.

But it was the appearance of the drink that we know today as sangria at the 1964 World’s Fair that cemented its popularity. The Spanish Pavilion served the drink at its Taberna Madrid kiosk. The name refers to the word sangre, meaning blood, and points to the red wine traditionally used in the drink. While it’s been more of a tourist quaff in Spain and Portugal, the fruity, alcoholic combo has a vast fan following in the summer months – especially the version made with white wine, rather than red as a base. It’s easy to make and has a few easily available ingredients.

Of course there are non-alcoholic alternatives to making the thirst-quenching beverage. I particularly like this version that uses black tea and pomegranate juice as a base.

It makes sense that white wine-based sangria is becoming more popular than one based on red wine. Albariño, the fruity white Spanish wine is a good choice, but any dry white with good acid will work – think Pinot Gris, Sauvignon Blanc, Vermentino, or an off-dry Riesling or even a rosé. Choose what you like to drink.

Although there is no official version of sangria, most traditional versions have a small amount of brandy to fortify the drink. You can also use a fruit-forward liqueur you may have in your cabinet like Grand Marnier (orange), framboise (raspberry) or St. Germain (elderberry) instead, or use both. Think of the spirits as seasoning for the sangria and use accordingly. It should be a fruity wine quaff for summer, not an opportunity to get hammered.

As for fruit, think about what will taste good, but also look good as well. This time of year, I’d go for thinly-sliced white and yellow nectarines, lime slices, and for a pop flavor with the best strawberries you can get – green tops removed, and cut in half lengthwise. 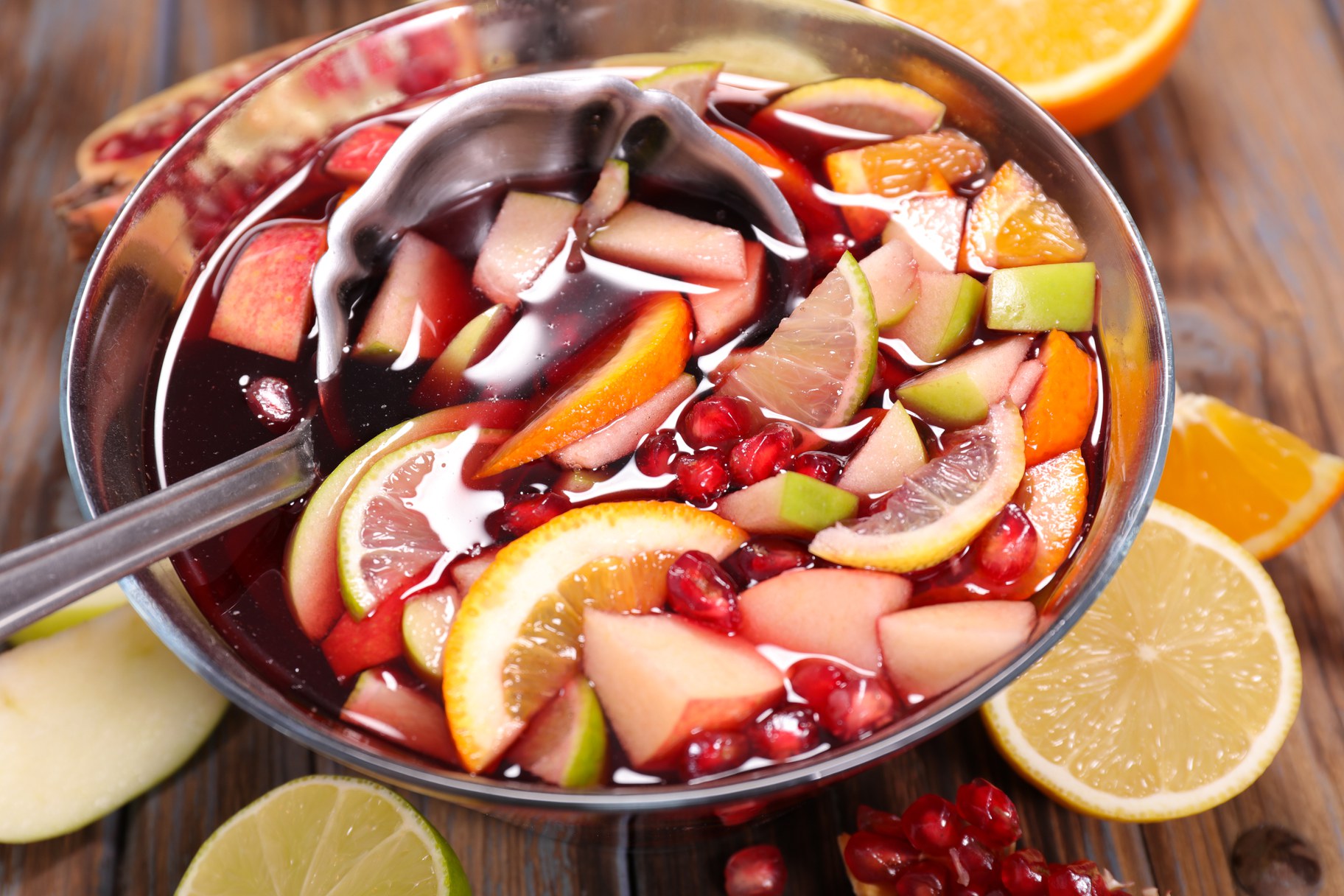 Mixed fruits give sangria its character. Photo by Shutterstock.

Start by macerating the prepared fruit with sugar, muddling the limes a bit to release their juices. The sugar adds a bit of needed sweetness while also pulling juices out of the fruit. Let the fruit sit with the sugar for at least 30 minutes, and up to overnight. Add the brandy and/or liqueur if using, and stir gently.

When you’re ready to serve, put the fruit and all the accumulated juices into a pitcher or punch bowl and add the wine. Rather than adding ice to the pitcher, add it to individual glasses along with a bit of the fruit, and of course the wine mixture, but don’t fill your glass. Top it off with a couple fingers of sparkling water. Adding the water brings the alcohol level down which is a smart move in hot weather. For one bottle of wine use about ½ - ⅔ cup sugar on the fruit. You can even mix everything together in advance and let all the flavors meld overnight in the fridge. Viva el verano!