Cesar Sayoc is charged with five federal crimes for allegedly sending 13 improvised explosive devices (IEDs) to Democratic leaders and those who’ve criticized President Trump. More devices could be out there. Sayoc drove a white van covered with pro-Trump stickers, and pictures of those leaders with crosshairs on them. A fingerprint and DNA cracked the case. 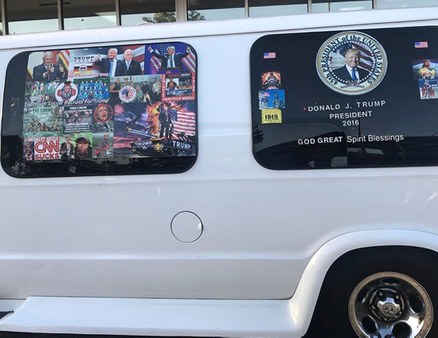 A van with windows covered in pro-Trump and anti-Democrat stickers,
which was apprehended on October 26, 2018 during an investigation into a series
of parcel bombs, is seen in Hollywood, Florida, U.S., April 6, 2018.

What we know about pipe bomb suspect Cesar Sayoc

The New York Times reports that three high-level executives at Google were accused of sexual misconduct, but the company stayed silent about it. One of them was Andy Rubin,...

In ‘The Hunter Killer,’ a female U.S. president and a moderate Russian president

Our critics review “Suspiria,” a remake of Dario Argento’s 1977 horror classic; “The Hunter Killer,” starring Gerard Butler as the commander of a U.S submarine attempting to...

Director Luca Guadagnino on his over-the-top remake of ‘Suspiria’

Luca Guadagnino’s last film, “Call Me By Your Name,” was a gay love story set in a small Italian town in the summer. It was nominated for Best Picture last year. Guadagnino...