Turkey’s invasion into northern Syria escalated significantly on Thursday. Dozens of Kurdish fighters were killed, and tens of thousands fled the region. Days ago, President Trump ordered American troops out of the area. That decision was widely condemned at home and abroad, viewed as abandoning a longtime ally who helped fight Islamic State militants.

Trump’s move is a betrayal to veterans like Porter Goodman. He’s a Redlands High School graduate who served in the U.S. Army in Iraq in 2006 and 2007. In 2016, as a civilian, he returned to the Middle East to support the Kurdish militia in northern Syria.

He tells Press Play that he almost didn’t believe Trump’s military withdrawal. He says it happened two or three weeks after the U.S. persuaded the Kurds in Syria to dismantle their defensive fortifications along the border, and they were willing to do so because they wanted to prevent war.

“They had guarantees from the United States… For Trump to turn around two weeks later and say, ‘Hey, we're actually going to step away from the border, Turkey is going to come in, and they're going to take over the area,’ it’s crazy. It's a betrayal,” Goodman says.

Returning to Syria to help Kurdish fighters, and not telling his family

Goodman still paid close attention to the region after his Iraq deployment ended. He says that when ISIS popped up, he was proud that the Kurds fought for their homes and stopped ISIS from taking more territory. The Kurds also implemented a decentralized democracy that concentrates power at the community level.

“They're very protective of ethnic and religious minorities. And they're really, really pushing hard for gender equality and women's rights… They're making such incredible progress,” he adds. “I was amazed by what they've been able to accomplish in the midst of a brutal civil war, where they are surrounded on one side by ISIS, and then on the other side by the hostile Turkish state.”

Goodman says the Kurds asked him to return. At the time, he was a student studying computer science at Brigham Young University.

He initially kept his loved ones in the dark about his decision to return to Syria.

“I couldn't talk to anybody about it because if I did, everybody would tell everybody. And my whole family would go to great lengths to prevent me from going,” he says. “It’s not like they've been doing all the research that I've been doing… I read about a lot of volunteers who had gone there and returned home. I did a lot of research into how I could mitigate risk… It wasn't going to be totally safe, but I could make it as safe as I could.”

He ended up telling his family that he was taking a job in Connecticut, so they could all say goodbye. Later, when he landed in the Middle East, he called them to reveal where he truly was. “They were very upset. [I] spent hours on the phone trying to smooth that over, eventually sort of did, and went on to Syria,” he recalls.

When he was in Syria helping the Kurds, Goodman felt validated. “I love the Kurds. I feel really privileged to be able to work alongside them,” he emphasizes. 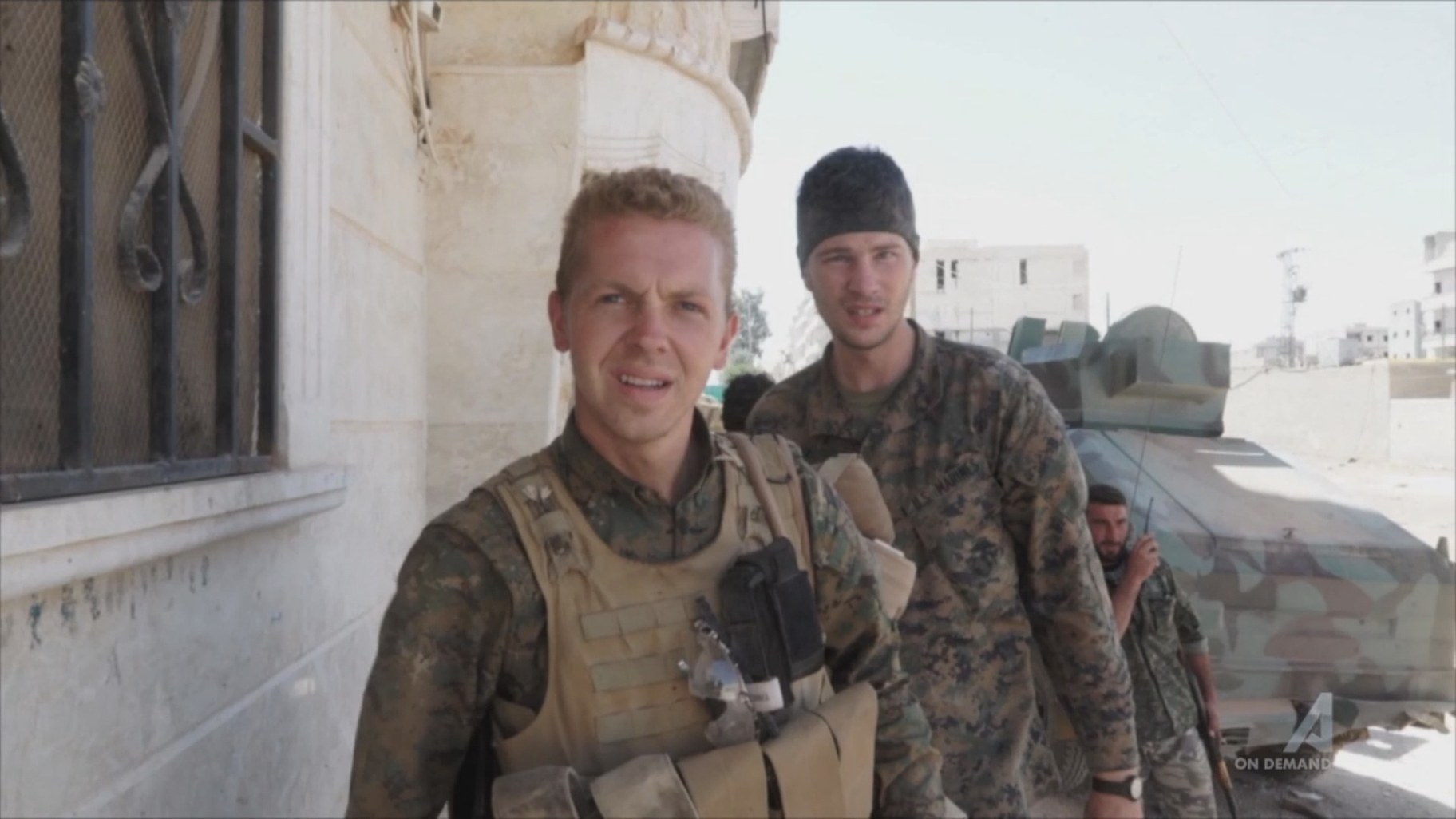 Porter Goodman with Levi Shirley, who was killed by an IED. Goodman was injured in the same explosion. Photo courtesy of Porter Goodman

Initially in Syria, Goodman was doing a lot of civilian work: teaching English, editing English translations of Kurdish and Arabic documents, teaching kids how to use computers, and consulting a radio station.

Later, he joined a team of combat medics. They were international volunteers like himself. “We were right on the front line… There were times when our position came under attack,” he says.

One time, Goodman recalls, the front line was moving rapidly and his team had to find an abandoned house to stay for the night.

“An Arab family told us there was an abandoned house neighboring their orchard, and we could stay in that house. Then they called up ISIS and said, ‘Hey there's a bunch of white people in this house.’ But we went to check out this house and decided it was not really a defensible location, and we left to stay somewhere nearby. And then moments later, an ISIS suicide truck came barreling through this village, ran right up to this house, and detonated.”

“Those wars combined cost us 4,500 lives and cost us trillions and trillions of dollars. And the outcome… it’s barely passable,” he says. “And whereas northeast Syria, it’s not a never-ending war. We were invited in by the Kurds, who had already taken control of territory there, and had already created their own democracy. We don't need to democracy-build there. We're not policing the hostile civilian populace. We are not dumping money into their infrastructure… The people there want us there. They're terrified that if we leave, Turkey will invade us (they are doing [it] right now)... This is a golden opportunity, and we're losing it.”