Now disarmed, what will Colombia's FARC rebels do next? During 52 years of armed conflict in Colombia, some 222,000 people were killed and five million civilians were forced from their homes. Last week, last year’s peace treaty was completed and FARC leader Rodrigo Londoño, also known as Timochenko, addressed a crowd, proclaiming, "Farewell to arms, farewell to war, welcome to peace." 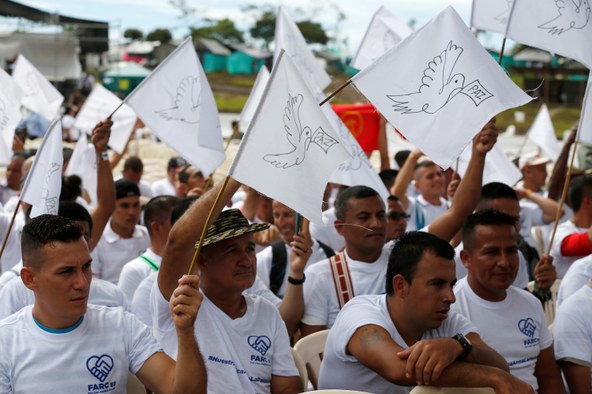 FARC rebels wave flags of peace during the final act of abandonment of arms in Mesetas, Colombia, June 27,2017
Photo by Jaime Saldarriaga/Reuters

Now, 7000 former rebels have to figure out what to do next. They include people recruited as teenagers, "with few skills beyond firing Kalashnikovs and patching up the wounded." That’s according to John Otis, who's reported for Bloomberg and NPR. He's author of Law of the Jungle: The Hunt for Colombian Guerrillas, American Hostages and Buried Treasure.

President Trump has arrived in Germany and a likely mixed reception from other leaders at the G-20 summit. But in Poland he was wildly cheered by a crowd — much of which was...

US elections and 'voter fraud'

Now disarmed, what will Colombia's FARC rebels do next?

During 52 years of armed conflict in Colombia, some 222,000 people were killed and five million civilians were forced from their homes. Last week, last year’s peace treaty...