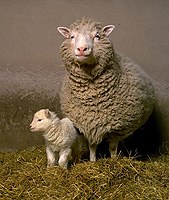 The Food and Drug Administration announced this week that meat and dairy products from cloned animals are safe to eat, but the Department of Agriculture is calling for a "voluntary moratorium" for time to build public acceptance among US and foreign consumers. Meantime, it's possible that Americans are already eating meat, not from cloned animals themselves but from their progeny. If nobody can tell the difference, what's the problem?  Critics say it's expensive, inefficient and cruel to animals.  Should such food be labeled?  We hear from critics and advocates, and from a high-profile chef who conducted a double-blind test comparing porterhouse steaks from the progeny of a cloned bull and a conventional one.

Introducing 'In Our Backyard' To the Point Apr 20

Tomorrow, Nevada voters will express their presidential preferences in casinos and other places, too. In this confusing caucus state where the rules allow same-day...

The Food and Drug Administration announced this week that meat and dairy products from cloned animals are safe to eat , but the Department of Agriculture is calling for a "...

President Bush today called for an " economic stimulus package " worth $140 billion, to encourage business to create new jobs and inject money into the economy, and to...

END_OF_DOCUMENT_TOKEN_TO_BE_REPLACED
KCRW's Drive to the Future: Where your support goes beyond public radio. Today, a portion of your donation goes to Inner City Law Center who provides free, high-quality legal representation to LA's precariously housed and those experiencing homelessness.
Give Now
Give Now