Native Americans and supporters from around the world are digging in against an oil pipeline near the Missouri River — despite being struck with batons, sprayed with Mace and charged with crimes. After the protesters lost a battle in court, the Obama Administration asked Energy Transfer, a Fortune 500 Company, to defer construction. But the bulldozers are coming. Sandy Tolan is there for the Los Angeles Times. 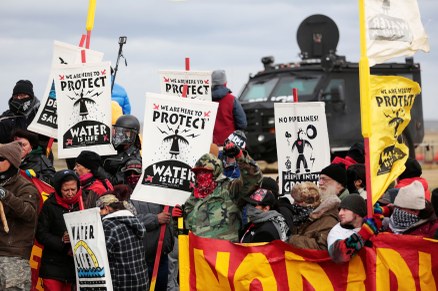 Dakota Access Pipeline protesters square off against police near the Standing Rock Reservation
and the pipeline route outside the little town of Saint Anthony, North Dakota
Photo: Terray Sylvester/Reuters

Protesters aren't the only ones being arrested, so are journalists perceived to be on their side. Deia Schlosberg, producer of a new climate-change documentary, How to Let Go of the World and Love All the Things Climate Can't Change, is facing felony charges.

With the election, legalized marijuana may reach a tipping point

Florida once again is a crucial battleground in the presidential campaign. Donald Trump has been there for several days, telling voters, "I'm back in my second home,...

Next month's election and recreational marijuana

Just 10 years ago, Americans opposed legalized marijuana by about two to one. Now those numbers have been reversed according to Gallup and the Pew Research Center ....

Native Americans and supporters from around the world are digging in against an oil pipeline near the Missouri River — despite being struck with batons, sprayed with Mace...