The Rodney King beating was videotaped by a bystander and broadcast on newscasts worldwide. Two weeks later, a 15-year-old black girl, Latasha Harlins, was shot to death by a Korean-American liquor-store owner, Soon Ja Doo. That incident was also videotaped by a surveillance camera and was repeatedly broadcast. Soon Ja Doo was convicted of second degree murder and granted probation.

After the Rodney King beating, Mayor Tom Bradley appointed a commission headed by former Secretary of State Warren Christopher, which recommended reforms of the LAPD. Then came the verdicts and the rioting. It became clear that the LAPD was completely unprepared for the violence and had no plan. Governor Pete Wilson called in the National Guard, which patrolled the streets for 17 days.

After the riot, it was Rodney King who asked the most important question, "can't we all just get along?" Since then, two of the LAPD officers — Lawrence Powell and Stacey Koon — were convicted of federal civil rights crimes. King received $3.8 million in a settlement with the City of LA.

We've heard about the mood of tension that gripped Los Angeles in the late 80's and early 90's, for a multitude of reasons.  Today, we speak with four "survivors" of the riots.  (We also hear the voices of poet Wanda Coleman, Congresswoman Karen Bass, LAPD Chief Charlie Beck, former Mayor Richard Riordan, Rodney King and others.) 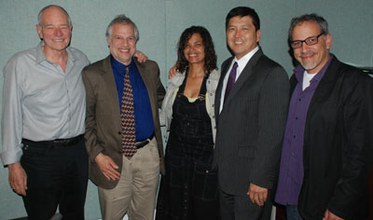 The Rodney King beating was videotaped by a bystander and broadcast on newscasts worldwide. Two weeks later, a 15-year-old black girl, Latasha Harlins, was shot to death by...