Ron English is an American artist and the benevolent Big Brother to popular culture mash-up painting, coining the term “POPaganda” to describe his own signature blending of high and low cultural touchstones.  KCRW is very excited to announce that this vanguard street, political and popular artist is the designer of our Winter 2012 artwork. I met up with Ron on the eve of his Corey Helford Gallery opening to learn a bit about his beginnings (as well as his mind) and I’m happy to share what I’ve learned with you. Enjoy this introductory course to Ron’s work and check out more about him at his own web site, POPaganda. 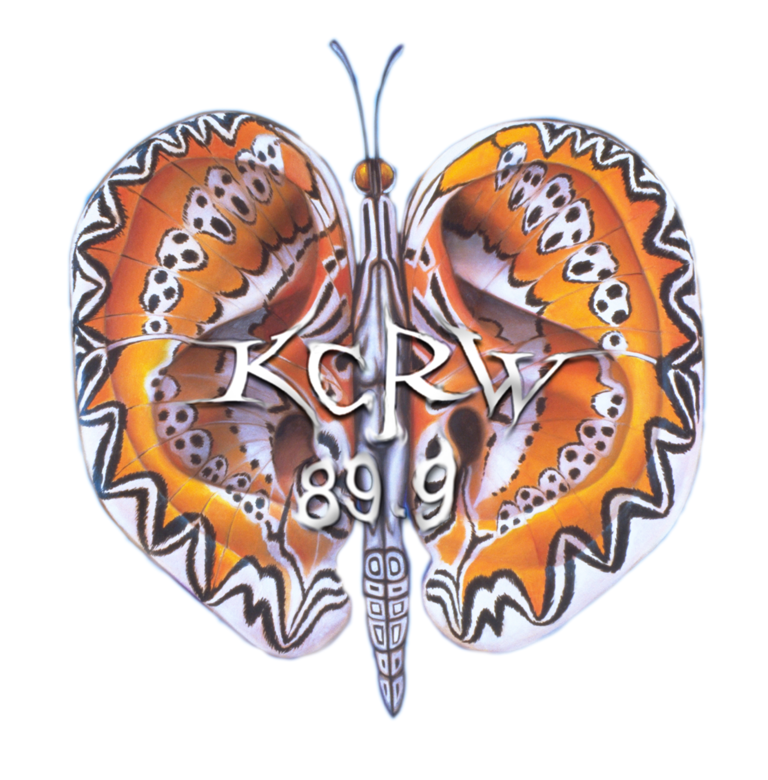 At four-years-old, an hour-long timeout was once assigned to young Ron English as punishment by his mother for playing with firecrackers in his family’s backyard. As timeouts traditionally go, he was seated alone in a room and directed to sit for one hour. Unknowingly, Ron’s mother left him alone with a box of crayons that until that time had gone unused. When Ron’s mother returned, she found him so immersed in drawing that he refused to stop. At first his mother thought he was continuing his bad behavior but she quickly realized he was drawing with sincerity, if not obsession. It was then, that at just four-years-old, two fundamental truths were unearthed about Ron English – he was mischievous and he really liked to draw.

This explains why so much of English’s art includes being blown up.

It also sheds some light onto the inspiration for Ron’s latest body of work – himself.

“I made this show very Pop Surrealist. This show is about myself. I thought I was the most ordinary person that ever existed. But then you realize as time expands, whoever you were, your experience was extraordinary and time makes it extraordinary… So for this show, I was trying to think about how we were the first generation that was totally saturated with media. We had a lot of cereals pitched just to us, cartoons and the first mass-produced toys. But there’s not a huge conversation about how was it for the receivers of this? What was this like for them? You lay in your yard and you imagine the Grand Canyon was this little ditch you dug – everything was expansive. So I was trying to play with the idea of the ever-unfolding imagination of a little kid.”

An Austin boy living in New York via the mid-west, Ron’s soft tone is attached to no dialect and he looks today much like he probably has most of his life – black t-shirt screened with his own MC Supersize character, grey blazer, shaggy blonde hair, goatee and black-rimmed glasses. He’s the leader of Comic-Con. And he really is. Along with his mighty portfolio that ranges from street to gallery to museum pieces (Ron is in the permanent collections of Rome’s Museum of Contemporary Art [MACRO] and Paris’ Museum of Modern Art), much of his work is also available as very limited-edition toys in the same cartoon culture mash-up of his paintings. Marilyn Monroe with Mickey Mouse boobs and a 3’ Charlie Brown with his skeleton showing can be seen at Corey Helford now.

But there was a time of course before all of these portraits, toys, gallery openings and museums. In much the same way that Kool Herc was the first DJ to spin a break-beat, Ron English is considered the first artist to bring commentary and cultural exposé into street art. He started with billboard takeovers. On these takeovers, using extraordinary wit and clever imagery, Ron flips corporate identities onto themselves with a guerrilla art tactic often referred to as Culture Jamming. The result is the exposure of the subliminal drivers behind commercial messaging and the control they effect on popular culture. His billboard subjects range from cigarettes to fast food to even the beloved Apple computer. Most well known may be MC Supersize, Ron’s obese cartoon image of Ronald MacDonald which also starred in Morgan Spurlock’s, “Supersize Me.” The effect of Ron’s Culture Jamming work is so poignantly accurate it smarts. The viewer is shocked by their new realization with a sensation like, “How’d I miss that?”

When I asked Ron about how he started his billboard enterprise, I was surprised by their fairly serendipitous beginnings, “I worked at a photo lab. They had a wall that was the exact same size of a billboard. Every day they would throw away used piles of seamless paper after models stood on them for photo shoots. They also had tons of paint from a catalog shoot where they photographed stacked up paint cans. So I went out and actually measured a billboard and said to the owners, ‘You know, your wall is the exact same size as a billboard. Why don’t I come in after work and I can take that seamless paper and that paint and I can paint billboards. I’ll post them up and you’ll see them when you come to work. It’ll be fun.’ They said sure. They were real nice.”

Nice indeed. This was a time when Ron had difficulty showing in galleries because of his young age of 20. Mid-‘80s Dallas galleries would tell Ron they were interested in established artists that were at least 30. So Ron continued to make his billboards, bringing large photo reproductions (also produced at the photo lab) to underground warehouse shows. A few of Ron’s friends liked his billboard ideas and began creating their own. After some time a crew was born and they began to collectively turn the city into their art gallery. In a night they’d paper billboards throughout Dallas, then get a keg and enjoy their citywide opening. A daring idea for the mid-‘80s, such activity today is practically a career path. For Ron and his friends, it was a really good time. As Ron puts it, “None of us thought we could make a career out of this anymore than we could make a career out of taking bong hits.”

But a career has followed Ron and whether it’s a billboard or a gallery painting, what’s wonderful about all of Ron’s work is his brilliant wit backed by extraordinary technique. His commentary is direct, mining just below the surface to raise Main Street’s subliminal monologue above a murky corporate ground. He combines pop culture shots with intricately detailed messages. Viewers become dramatically engaged with his work and disappear into Ron’s bizarre rabbit-hole world. As a result, viewers often begin to question their commitment to the tattled on messages – whatever they may be. Ron is a master with the effect of light in painting to bring dimension to his work as well as the effect of light to bring dimension to his message.

I’ll end with Ron’s commentary of an alien from outer space’s perspective of our relationship with cows and how to keep things interesting:

“What if an alien came, they’d say, ‘Oh, you have this weird relationship with cows. What is that all about? You take your mother’s milk away from your babies and have them drink cow milk, and then you eat the cows, what else do you do with the cows?’ If you’ve always known something, it’ll never be strange. But when you go to another country and everything’s weird, or another city and everything’s weird, and then it kind of normalizes and then it’s not interesting anymore. How do you keep things kind of interesting? Like when I was a kid, to keep from being beat up, they would ask me to draw stuff but as an artist that’s the first trick you learn so it’s not interesting to you anymore.”

Perhaps that’s what all the sexy bovine cowgirls are all about.

Ron English is on view at Corey Helford Gallery through December 10th with “Seasons In Supurbia,” featuring 18 new paintings as well as sculpture and toys. Corey Helford is open to the public and is located on Washington Boulevard in the Culver City Arts District.

Thank you for showing you value KCRW for important news, culture, and music Members Sep 30

KCRW’s Season of Giving Back – KCRW Champion Sheila Golden challenges YOU to donate to KCRW TODAY. If we can raise $10,000 she will match it — totaling $20,000 for KCRW!
Give Now
Give Now!