Hundreds of artists and celebrities made signs to raise funds for #SayHerName Mothers Network. “Show Me the Signs” Installation view, 2020 Blum & Poe, Los Angeles. Image courtesy of the artists. Photo by Ed Mumford

Artists respond to both the violence and loneliness of the pandemic. Paintings depict the past while imagining a future where order breaks down. Protest signs are being auctioned to support families of the Black women who have been killed by police brutality. 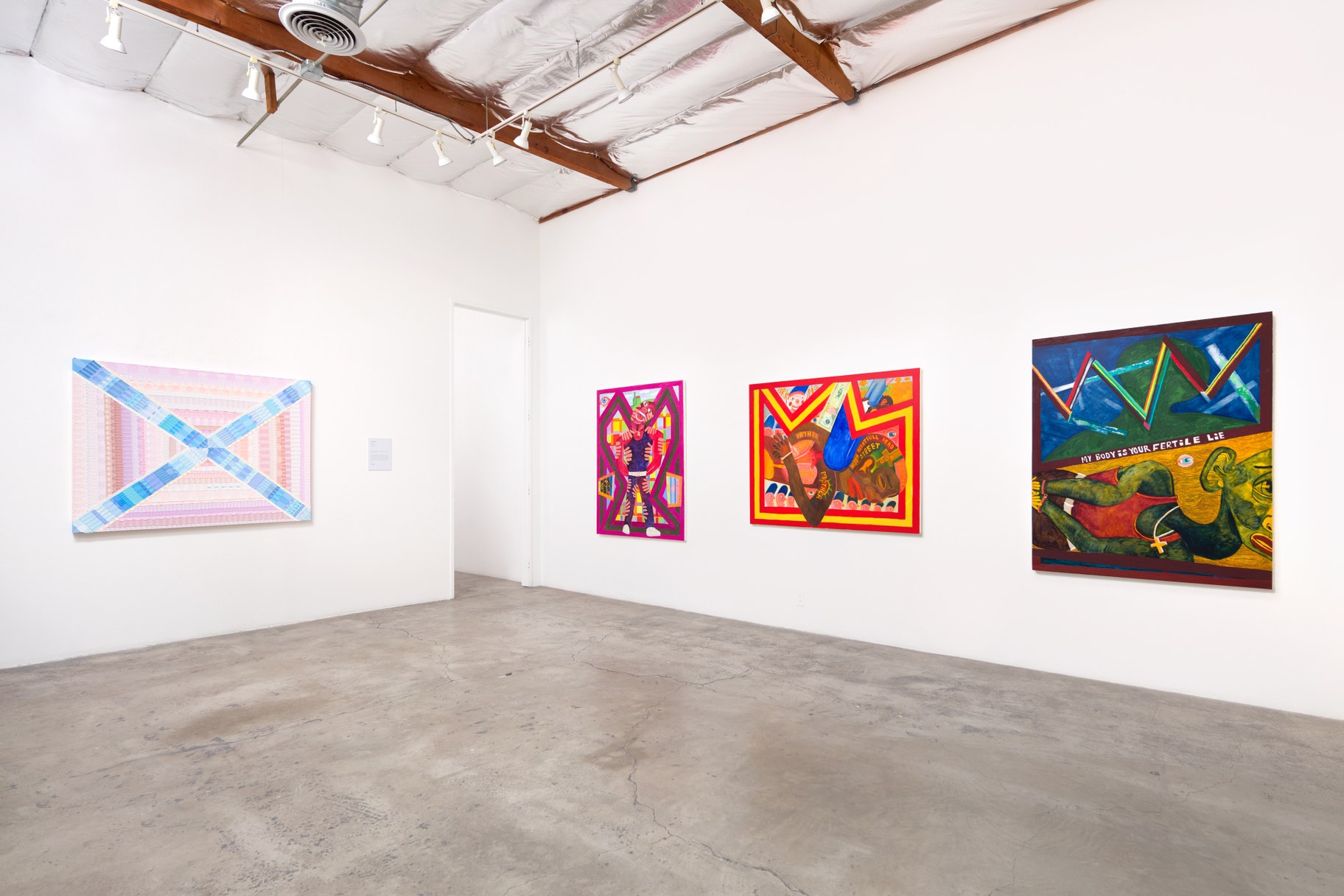 At Luis De Jesus in Culver City, a group show gathers a loose array of artworks that were made in response to recent events. With so many crises affecting our country, the work diverges in focus, addressing a range of issues: pandemic’s loneliness, the toppling of monuments, and the lives lost to police brutality.

Unusually, the gallery has included artist statements next to each artwork, allowing the viewer into the thinking behind each work, and providing a connective personal tone across the exhibition. Laura Krifka’s eponymous painting is voyeuristic and sensual: a woman in a sheer top collects ripe oranges in a basket, and a leering shadow can be seen in the background as if coming from the viewer’s vantage point — we become the onlooker to this scene. In her statement, Krifka talks about the early weeks of lockdown and the ways many watched the outside world from the safety of their homes, “sometimes with longing, at other times rage and indignation.” June Edmonds’ painting, “Silence,”  features thickly slathered globs of pastel pink and blue paints applied in neat rows forming an “X” form of a Confederate flag. In her statement, Edmonds speaks about silence, describing it as “another dirty and ugly side to white privilege.” Though the work on view casts a wide net across social, political, and personal responses to the moment, a palpable longing is felt across the show — a longing for newness, connectivity, and unity where it has been otherwise vacant. 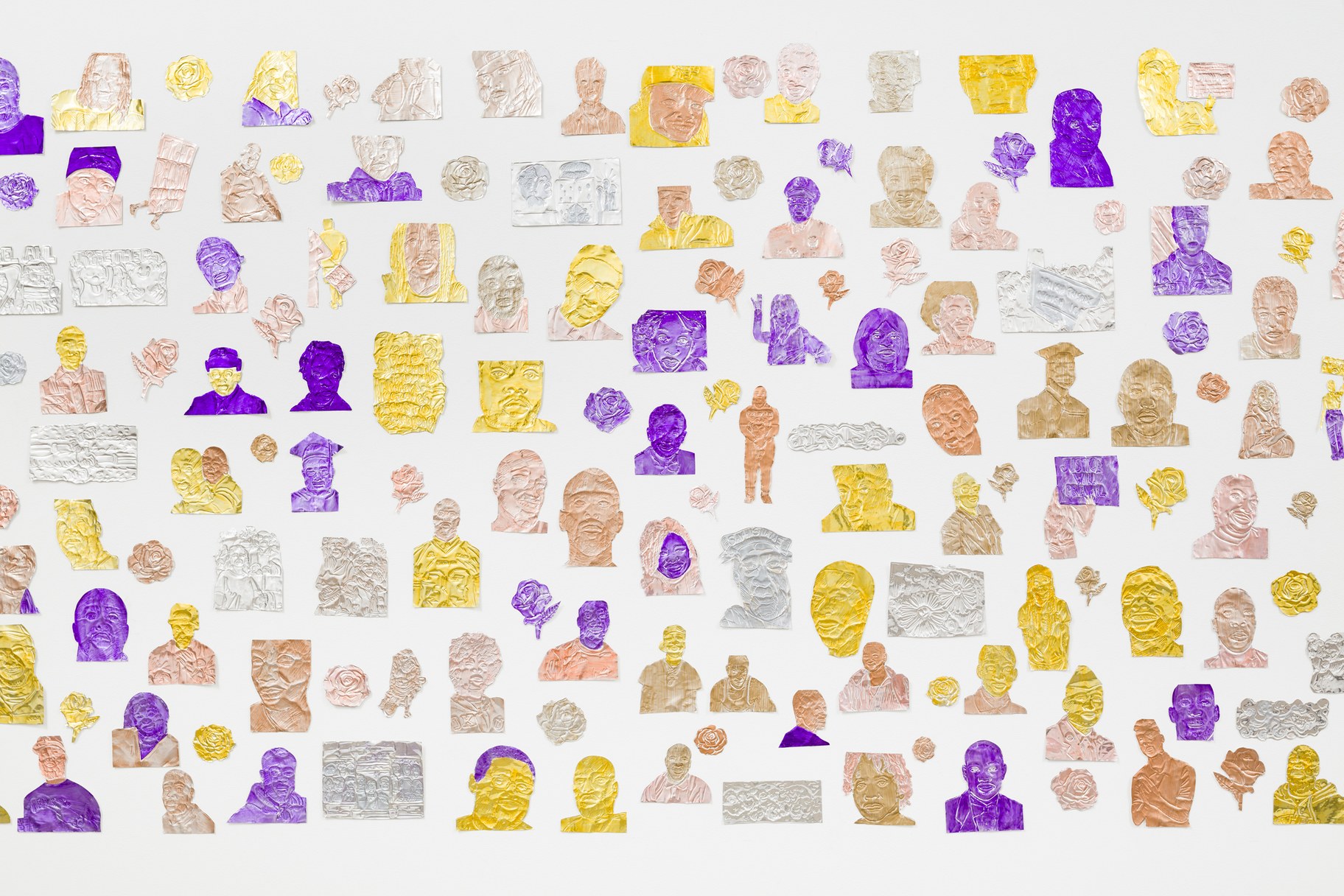 A long wall at Luis De Jesus is dedicated to Edra Soto’s work, “Let Love Win.” The work consists of hundreds of small metal portraits the artist traces from news stories featuring victims of police brutality. The process is similar to traditional milagros, charms used for healing in Mexican and Latin American traditions. In the work, these individual portraits are joined by flowers, protest signs, and scenes from the summer’s uprisings. Soto started making these works soon after the killing of George Floyd and plans to continue the project as an archive that memorializes our moment while paying homage to each victim. In her artist statement printed alongside the piece, Soto explains, “art is a reflection of our cultural values and our belief systems. Now more than ever, art has become the form of communication that allows us to connect, discern from the overlooked, and advocate for others. ‘Let Love Win’ is my personal stand for the current social justice movement.” 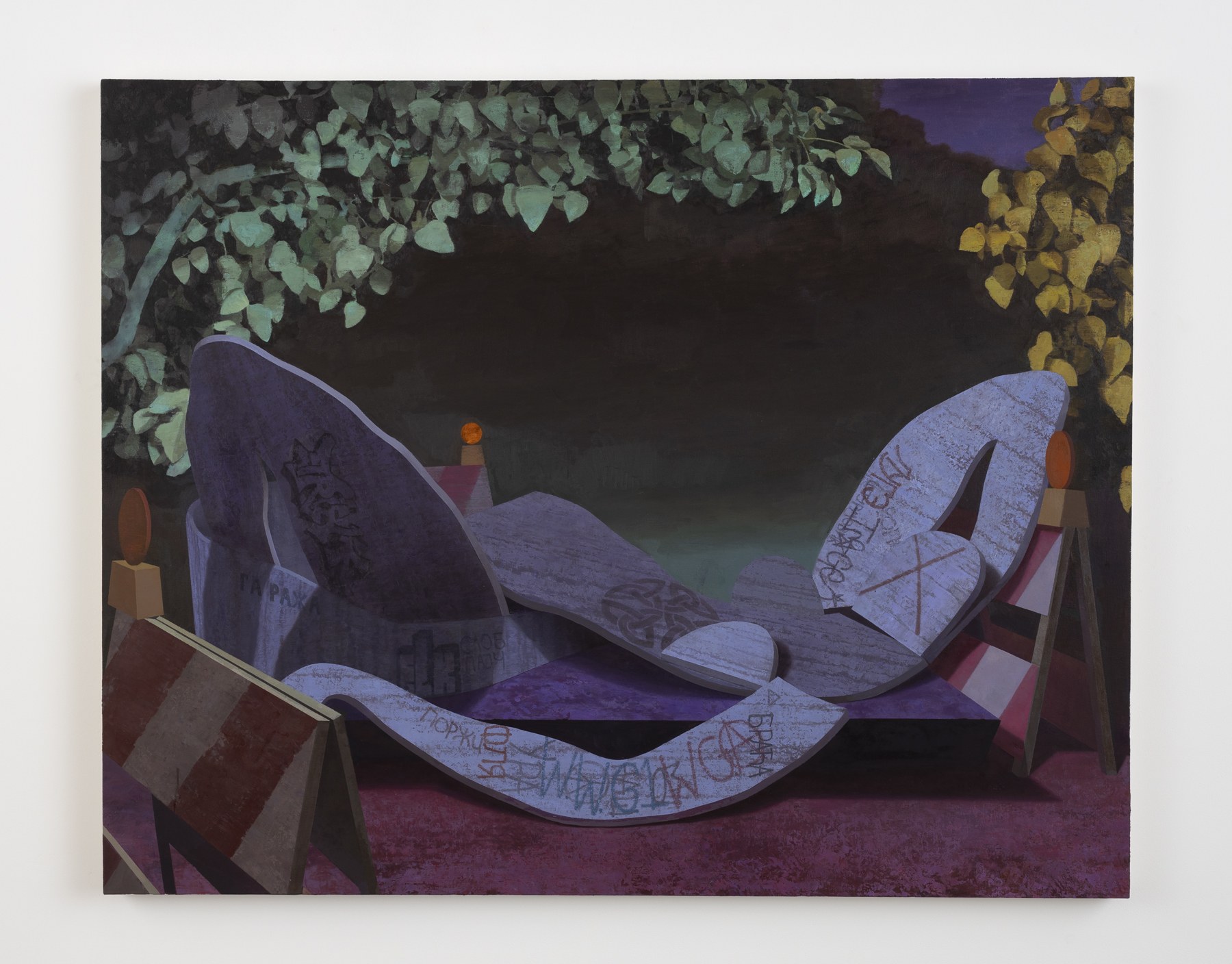 At Philip Martin Gallery, Daniel Dove’s paintings feel both old and new. An Eames chair or Brancusi sculpture would not feel out of place in these painted environments, yet the scenes depicted feel like traumatic aftermaths in some imagined augmented reality. For instance, in “Under Construction,” an abstract sculptural figure, which I can’t quite place  — is it a Henry Moore sculpture? Alexander Calder? — lays in repose under lush foliage. Yet, the scene is darkened, and cloistered in by barricades, and the figure has been marred by graffiti with a large “X” drawn on her face. In an interview on the gallery’s website, Dove describes this unsettled feeling as a depiction of “the state of the world after order has broken down.” To increase the uncanniness of these works, the artist pulls from real sculptures and places — those that have been lodged in the folds of my brain from some distant art history course — and blends them with fictional scenes of the artist’s own invention. He explains that the paintings “have this authority of reality to them, but at the same time they aren’t direct records of anything that ever existed.” 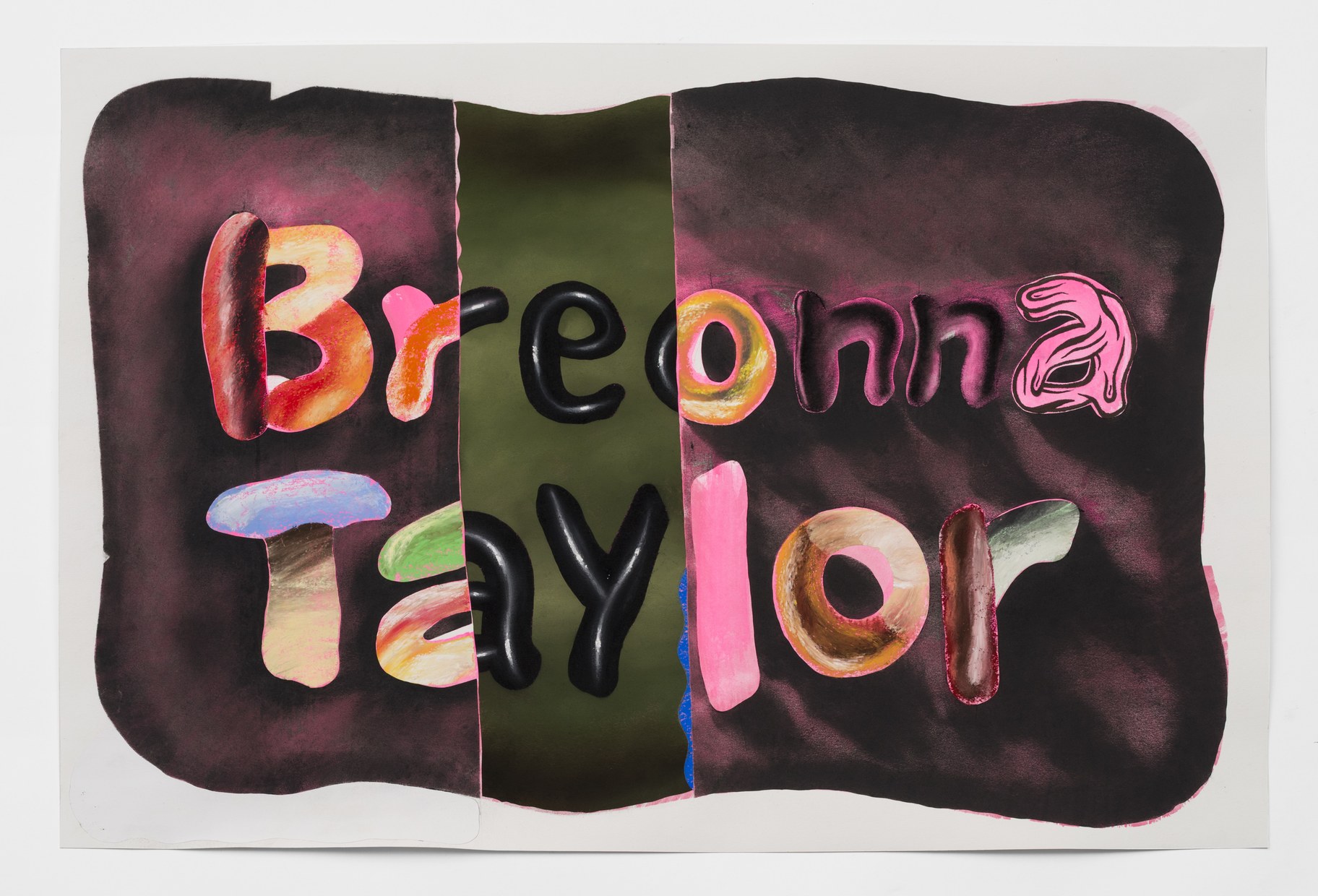 Nathaniel Mary Quinn, "Breonna Taylor," 2020. Image courtesy of the artist and "Show me the Signs."

More than 100 artists and musicians have come together to make protest signs that will be auctioned with 100% of the proceeds going to the African American Policy Forum’s (AAPF) #SayHerName Mothers Network. Artists include George Condo, Marilyn Minter, and Rashid Johnson, alongside musicians like Billie Eilish, Cardi B, and Bruno Mars, and the signs include powerful messages including“No Words, “Silence = Violence,” and “No More Blind Eyes.” The #SayHerName Mothers network works to elevate the stories of women who have been killed by police violence and works to support affected families and communities. Participating artist Nathaniel Mary Quinn — whose protest sign includes Breonna Taylor’s name written in delicate rainbow bubble letters — writes that “Breonna Taylor, a human being, was murdered within the cascade of circumstances that fuels a particularly deep sense of sorrow...In the words of James Baldwin, ‘not everything that is faced can be changed, but nothing can be changed until it is faced.’” The artist made protest signs have been posted to an auction website, where starting next week, the public can bid on the artworks. The signs will also be on view at Blum & Poe through November 14.

Correction: A previous version of this story misidentified the gender identity of Edra Soto. This post has been updated and we regret the error.