Drawings made during the pandemic pull from pop culture. Two artists use ceramic glazes for sculptural effects. An exhibition offers a material antidote to on-screen art viewing. 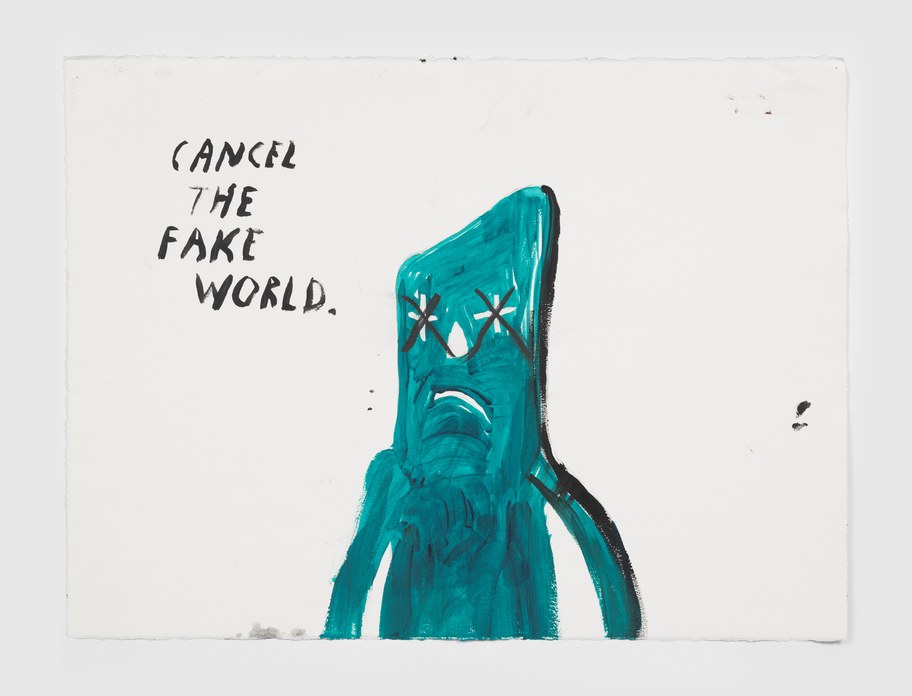 In his current show at Regen Projects, “Pacific Ocean Pop,” Raymond Pettibon made much of the works on view since the lockdowns began in March. While Pettibon has been working in a distinctive style for over 30 years — a blend of illustrative drawings of American Pop references with poetic text lifted from books, culture, or the artist’s own mind — the urgency of the pandemic’s isolation can be felt in these particular drawings. There is a rushed energy to them, like each drawing couldn’t get onto the page fast enough before the next one started to sprout from Pettibon’s paintbrush. On view are the artist’s familiar subjects  — Gumby and Pokey, Superman, surfers, baseball players — and Pettibon blends these icons with a range of texts culled from a range of sources: from Shakespeare to text message lingo, like the text “Str8 Line” that appears in one surfing drawing. Phrases like “cancel the fake world,” “Redlining,” and “I’m aware” seem to touch on our political moment without sacrificing Pettibon’s typical punk detachment. The drawings are content to exist in the meanings read between the lines. 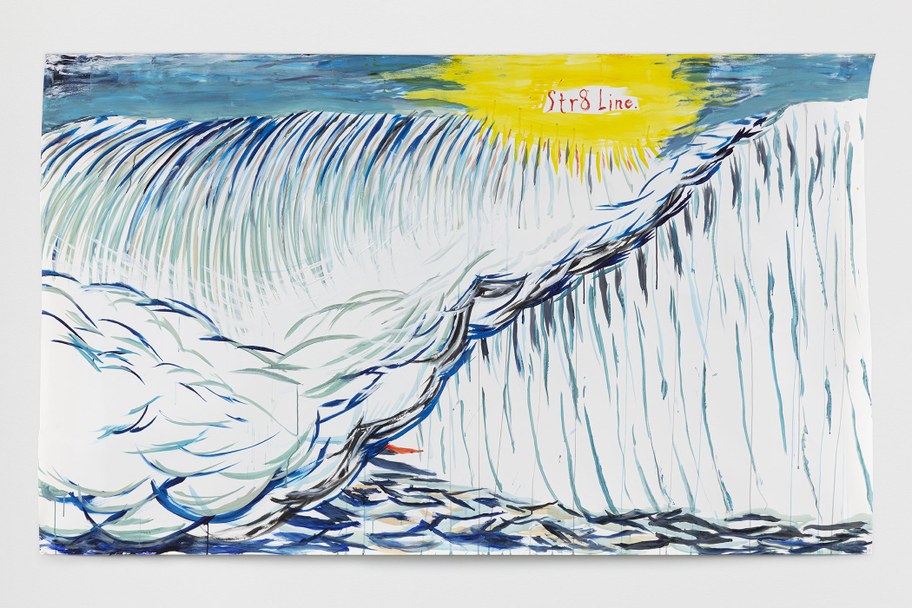 Raymond Pettibon’s work can feel cryptic, like a punchline to a joke that you aren’t picking up on. He told Interview Magazine, “Well, if I were asked to explain it, I would tell you there’s not necessarily one point or punch line or message, but more something I was thinking that made it that way—and it’s not just random association or random editing or just putting one phrase with another.” Pettibon works like a collagist, pulling from the public record, and rearranging images to present new meanings. He explained, “I really don’t have my own voice expressed in any given piece… I work more in the vein of the Roman satirists, Horace or Catullus, who would name names just to put it on record, that this is how things were.”

Make an appointment to see in person 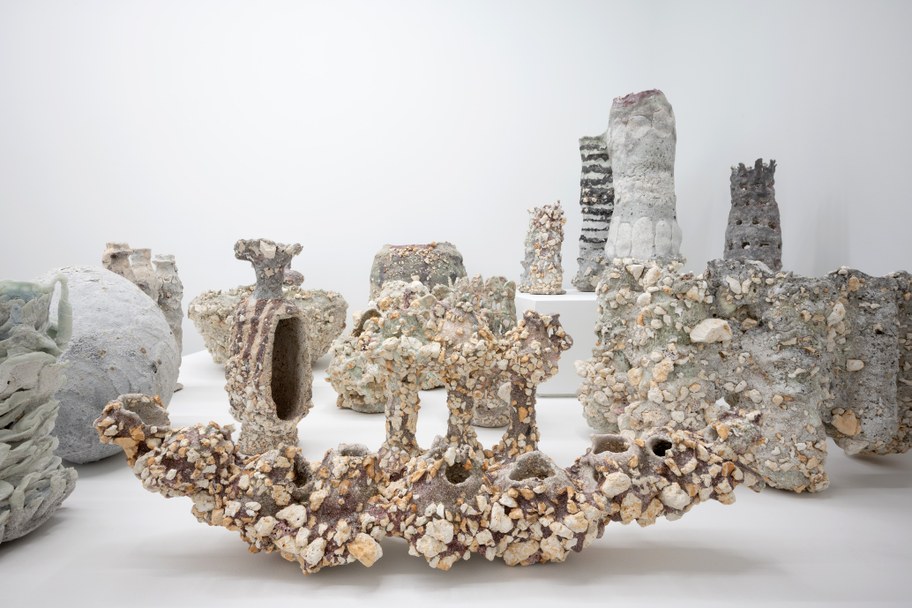 At Nonaka-Hill, the two halves of the gallery each contain elaborate, textural, and unique ceramic works that couldn’t be more different. On the left, Japanese artist Masaomi Yasunaga’s ceramic forms look like objects salvaged from a deep-sea journey; the vessels are installed on a densely-packed pedestal, encouraging an exploratory approach from the viewer. In a process that upends traditional vessel making, Yasunaga’s forms are in fact made with glaze as their primary material. Each glaze form is buried in sand or other materials before they are fired in the kiln; he adds only enough bits of clay to the exterior of each object to bond to the glaze, stabilizing each delicate form as it fires. As such, the works carry an embodied history of their making, much like found sea glass that’s become encrusted in barnacles. The right side of the gallery houses several series of clay sculptures by LA-based artist Sterling Ruby, whose thick glazes counteract Yasunaga’s earthiness with their shimmering luminescent gold and bronze hues. One work, “Basin Theology / TROPHIC CASCADE,” which loosely resembles a boat with a cannon jutting out the front bow, is in fact a depository of sorts for the artist. The work houses scraps and broken ceramic pieces from past projects that all become drenched in a thick layer of gloopy glaze. For both artists, the glaze itself, sometimes an afterthought in the ceramic process, becomes an essential element of form-making.

Make an appointment to see in person 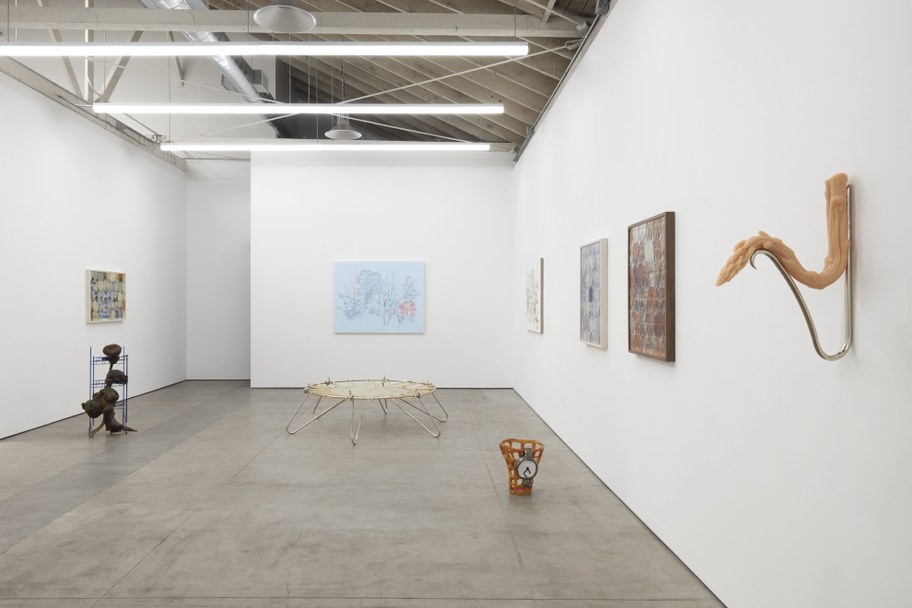 As galleries continue to adapt to a digital terrain  — with a dizzying slew of online programming, exhibitions, and walkthroughs — Matthew Brown offers an antidote to on-screen fatigue. The gallery’s current exhibition, “Material Conditions,” celebrates sculptural materiality and labor-intensive artist processes — one of those shows that online viewing can’t quite capture. Michael Assiff’s works are low-relief depictions of florals and bug life that he has rendered through a process of piping plastic through confectionary piping bags. Ivana Bašić’s alien-like head with blown glass protrusions dangling down from its mouth is so delicately rendered that it feels culled from the set of a sci-fi movie. While Assif, Bašić, and others are carefully composed in their artistry, Brandon Ndife’s furniture hybrids sprout strange human-like growths and mounds that are abject in their unruliness. In “No News (Good News),” brown earth-encrusted resin forms climb up a blue display rack which almost acts as an impromptu skeletal structure for the abstract and monstrous form. Together the exhibition highlights material and sculptural experimentation, with a subtle undercurrent of Halloween-y horror.

Make an appointment to see the show in person