A skateboarder paints a surrealist world that inspires unity, an artist uses industrial processes to expose the human touch, and architectural sculptures are based on colonial structures.

Martín Nuñez at the Landing

In the small back gallery at the Landing, artist Martín Nuñez unfolds a mystical surrealist world in which fantastic creatures commune with humans in a technicolored dream space. The exhibit is titled “Lost Paradise” and is curated by Michael Slenske. The exhibition is an interspecies romp in which amphibians, aliens, humans, and animals become intermixed, commingled and anthropomorphized.

One work, titled “Saturno,” relates directly to Francisco Goya’s infamous painting, “Saturn Devouring his Son.” In the mythology, Saturn ate his children for fear of being overthrown. Goya’s rendering of Saturn is bloody, brooding, and rendered in shadowy colors. Yet in Nuñez’ rendering, Saturn sprouts rainbows, and a skateboarding alien-like creature cruises casually by in the foreground.

Nuñez says in the press release, “I use my painting to escape from all the madness and chaos around me, to peek into another dimensional reality, because our reality is often much madder and more chaotic.”

Curator Michael Slenke adds in a short gallery walkthrough video, “it seemed poignant at this moment to deal with the type of surrealism that’s about sort of embracing the strange or the other.”

Although work in a surrealist genre might be considered escapist or fantasy, Nuñez gives us a vision of an intersectional future, where barriers and divisions make way for community and play.

Check out a 3D walkthrough of the exhibition, or visit by appointment. 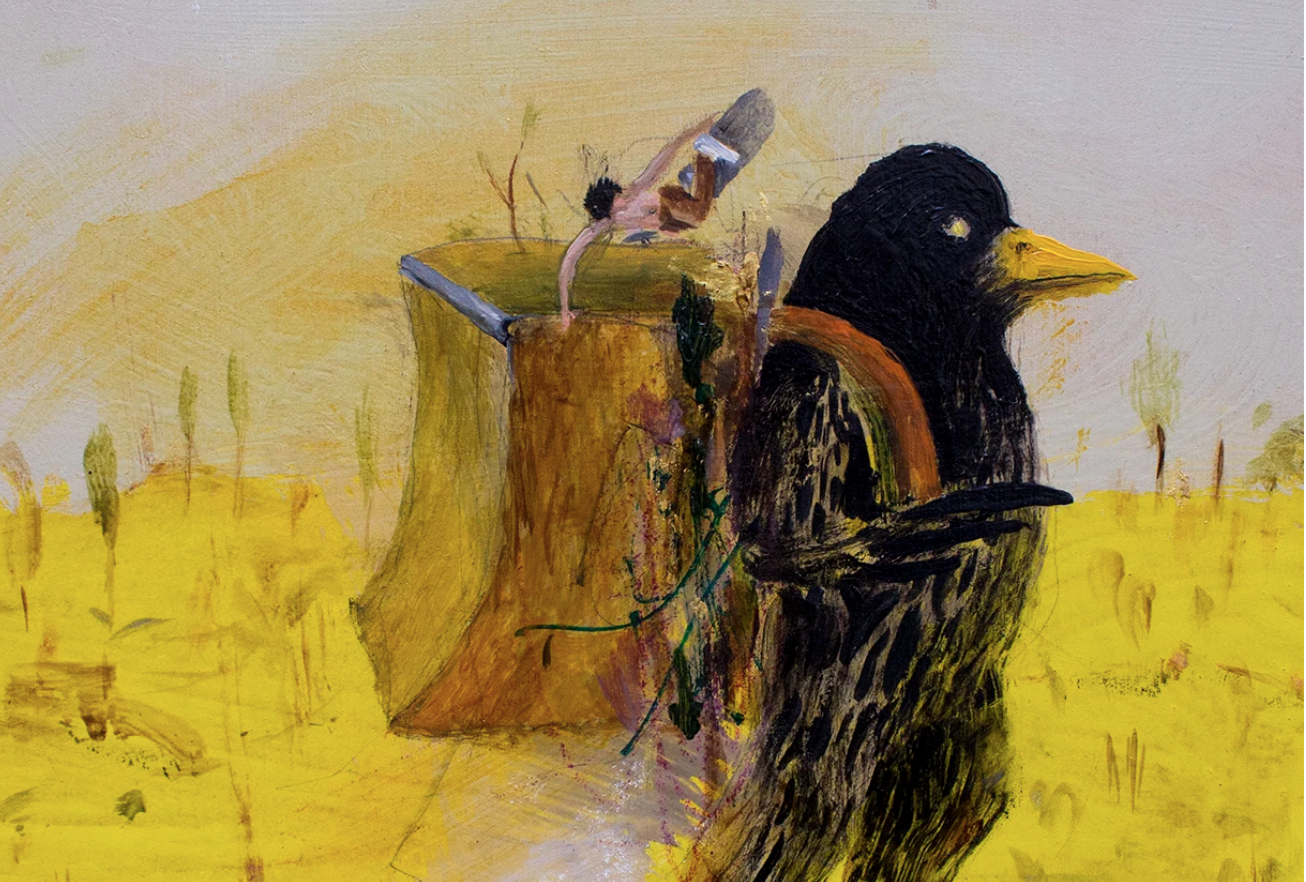 In addition to being a classically trained painter, Martín Nuñez is a professional skateboarder. The artist has built a skatepark near his home in Mexico City. In many ways, the communal spirit in his surrealist paintings carries over to his interactions with the skating community.

He owns a skate brand called Lúdica, which translates in English to playful. A post on the Lúdica Instagram account explains, “Playful is a way of learning by playing, a way of being, and being in the world in a happy and fun way!! This world is incredible, and it always has dark and complicated roads, but also bright and beautiful roads!! Long live planet Earth!! Long live skateboarding! Long live life!”

For one series of sculptures, Nuñez creates birdhouses out of used skate decks, and hangs them in the trees of public parks. Curator Michael Slenske explains, “For Martin, the process of returning the decks to the trees is a completion of the life cycle, a humble poetic gift that is a return in spirit but not in form as the decks can never fully integrate into the tree again.” 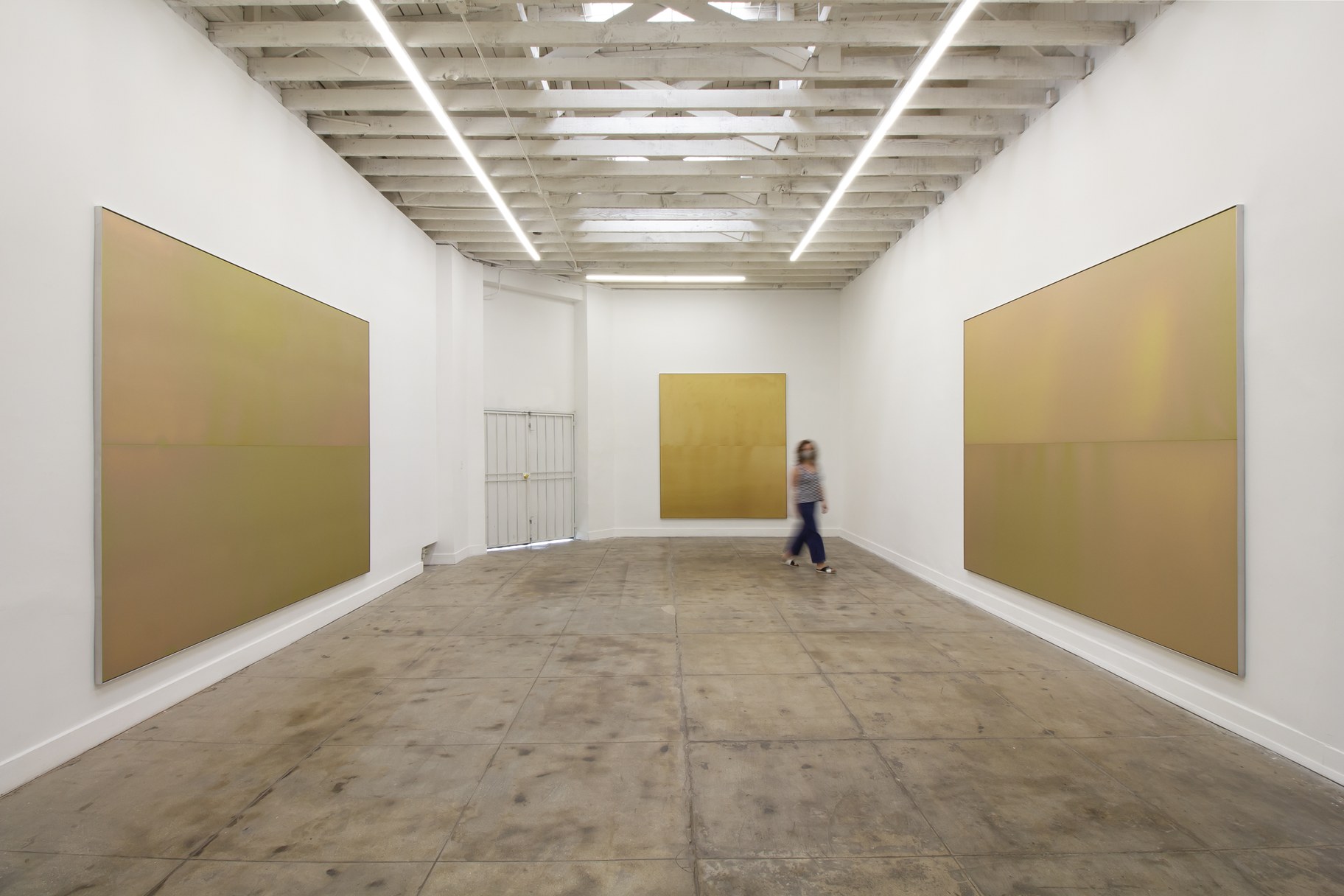 Stepping off of busy Washington Boulevard and into Devin Farrand’s exhibition, at Ochi Gallery is like entering a hush-filled chapel. In “Felled Forms,” three large aluminum panels dominate the space with gold hues that subtly give way to pinks and greens as you move past them.

The scale of the work creates a meditative field that encompasses your field of vision, while the minimal aesthetic becomes a mechanism for highlighting the subtle variances between each panel. Farrand works with local finishers to apply a “chromate conversion coating” to the panels. This is an industrial process that serves as a corrosion inhibitor (think of the finishing on an iridescent gold screw, for instance) that coats the aluminum in luminescent and color-shifting hues.

Though Farrand provides identical panels to the finishers, each comes back with small variances that point to the human touch that is necessary in industrial processes. In one work, “Headland,” two panels are stacked, and each contains unique marks, one gestural and irregular, the other more mechanical and occurring in horizontal striations. The artist informed me that these variations are simply due to each finisher’s unique method of drying the panel with an air hose after being plated, pointing to the unique human gestures behind industrial labor.

Farrand hopes that his exhibition will provide a peaceful reprieve for people to come and recharge. He says, “I wanted to create an exhibition you could move into, not away from, something generous that lets you in, without direction, as a restorative gesture. … The scale and warm hues of the work wrap you up like a thunder blanket.” 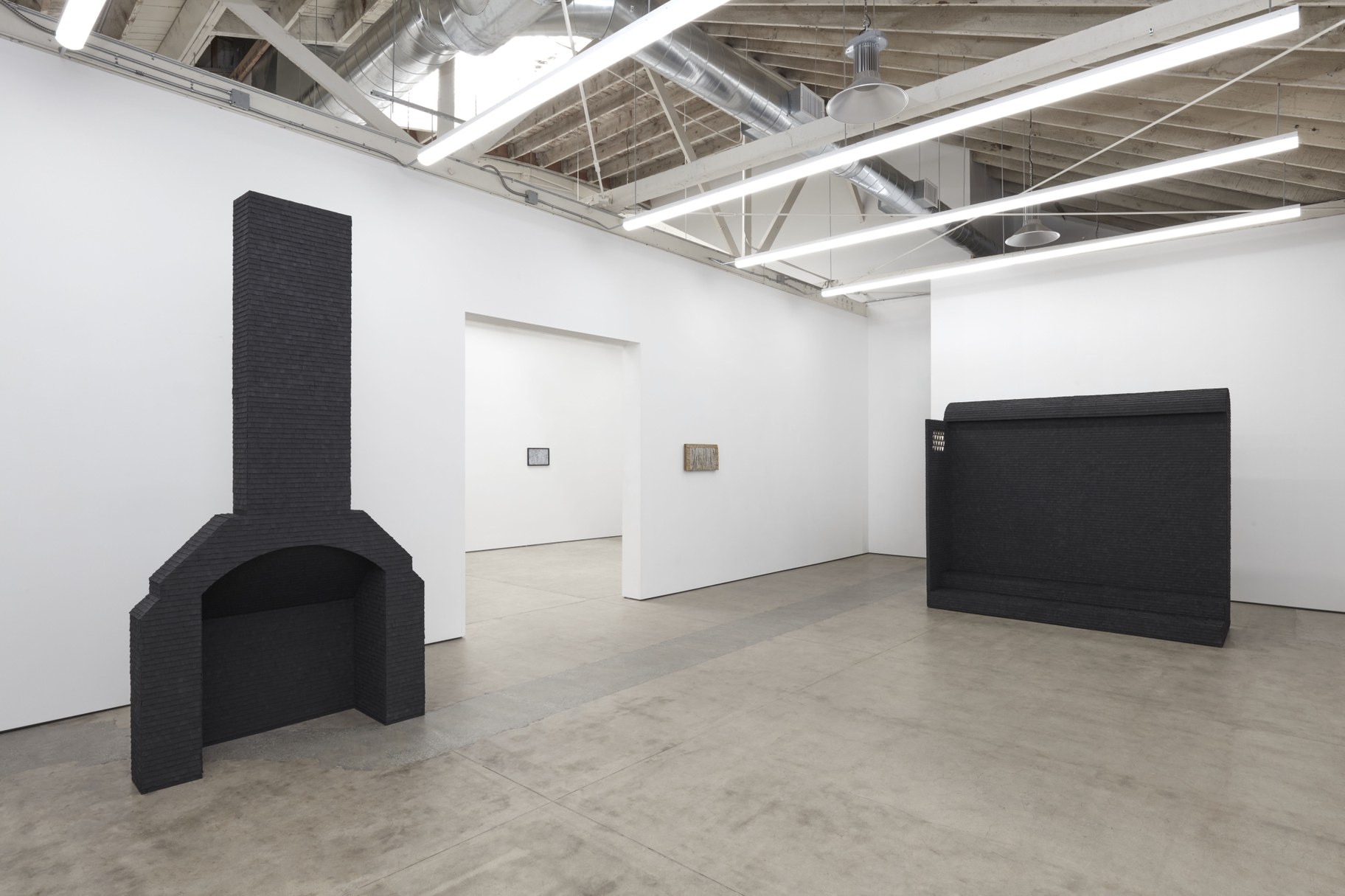 At Matthew Brown in Hollywood, a solo show by Cal Siegel called “Fine as All Outdoors” ruminates on colonial architecture through a series of large scale works that are clad in darkly-stained dollhouse shingles. The beautifully crafted works are strange hybrids of familiar architectural forms — porch steps, fireplaces hearths, rounded ornamental features — and pared-down minimalist sculptures.

In relation to the inch-wide dollhouse shingles that cover the exterior of the works, the scale sits in an uncanny space between maquette and usable structure. The sculptures, which imply functional use, feel at once too big and too small. This eeriness is heightened by the absence of any windows or doors. The structures fail to offer an invitation into an interior space, and seem built to keep out, rather than invite in. Siegel explains that “architectures, which we hold as self-evident, are imbued with inherent notions of power implicit in their motivations and erections.”

Much of Siegel’s work is informed by his upbringing in Massachusetts and looks critically at the symbols of colonialism that permeate through American culture. A series of small watercolor drawings of apple trees in the exhibition expand the colonial impact to nature (the apple tree was introduced in North America by 17th century colonists). Though unlike the imposing coldness of the colonial structures that Siegel references, his forms are delicately handcrafted and emanate a delicate warmth.