“Go Outside and Stay Inside” at Outside Gallery

As social interactions and leisure activities migrate outdoors due to COVID-19, Outside Gallery — a front yard space in Lincoln Heights that presents outdoor exhibitions — is an ideal venue to host a pandemic art show.

“Go Outside Stay Inside,” co-curated by artists Don Edler and Cara Chan, features sculptures that double as interior objects. The title recalls the mixed messaging of early pandemic protocols, and the irony of being advised to both stay isolated indoors and recreate outdoors.

Don Edler explains, “At first [Cara and I] both showed up with ‘furniture sculptures.’ And as we began to install, we started to realize we were creating an ‘interior’ or domestic space in a gallery that was entirely outside.”

Various sculptures-as-seating are arranged throughout the yard, around a central rug by Chan. A large tree frames several works. A stained glass piece by Anna Breininger is strung up in the branches. A painting of an open door by Cameron Masters is tacked to the tree’s trunk. And a sculpture by Edler is embedded into the dirt, collecting fallen dried leaves. Sculpted candelabras by Amelia Lockwood include flames cast in cement — more prop than functional object. A chair by Chan is modeled after the character in Edvard Munch’s iconic painting “The Scream,” inviting brave visitors to sit in the lap of the ghoulish protagonist.

“The works in this show reflect on our desire for community,” says Chan. “We offer a socially distant choose-your-own-adventure seating arrangement, from sitting in the lap of existential dread, to reclining on a Stone Age lounger, or leaning up against a concrete wall under an artwork that may cover you in sparkles. While in the company of birds, ambient sources of light, and other secrets hidden around the garden, we invite you to take part in the inside/outside lifestyle of quarantine era Southern California.” 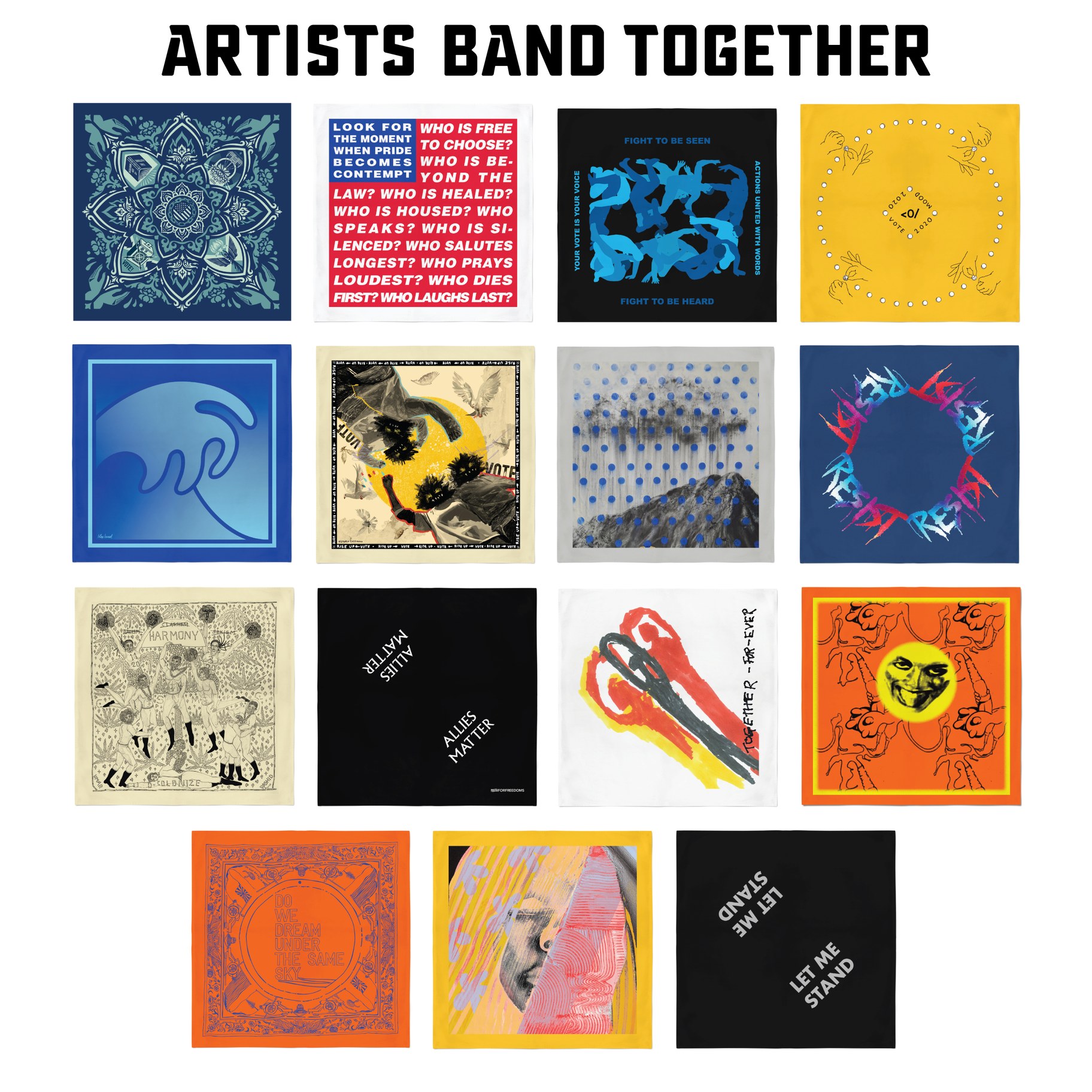 Fifteen artists created custom bandanas to raise funds for organizations that are mobilizing voters ahead of November. Image courtesy of Artists Band Together.

Fifteen artists have joined together to create limited edition bandanas with 100% of proceeds going to organizations working to increase voter turnout this election (Mijente, Rise, and Woke Vote). The project, called “Artists Band Together,” includes bandanas by  Shepard Fairey, Marilyn Minter, Jenny Holzer, and Christina Quarles. The bandanas are available via eBay to purchase individually or as sets, with new sets dropping on September 1.

In a time when face masks have become integrated into  everyday attire — whether at the grocery store or a protest — the bandana feels particularly potent. One of the project’s curators, Nora Halpbern, explains that it is "rooted in the history of bandanas as symbols of unity. From the abolitionist movement to Rosie the Riveter, bandanas have been wearable markers of alliance and action."

Bandanas also provide an accessible, reproducible medium for distributing artist works for a low-cost entry point. Participating artist Shepard Fairey says, “This project embraces the principles of democracy by making art accessible through the bandanas. … I think that everyone from collectors to activists will be embracing these as collectable symbols of democracy at this historic moment." 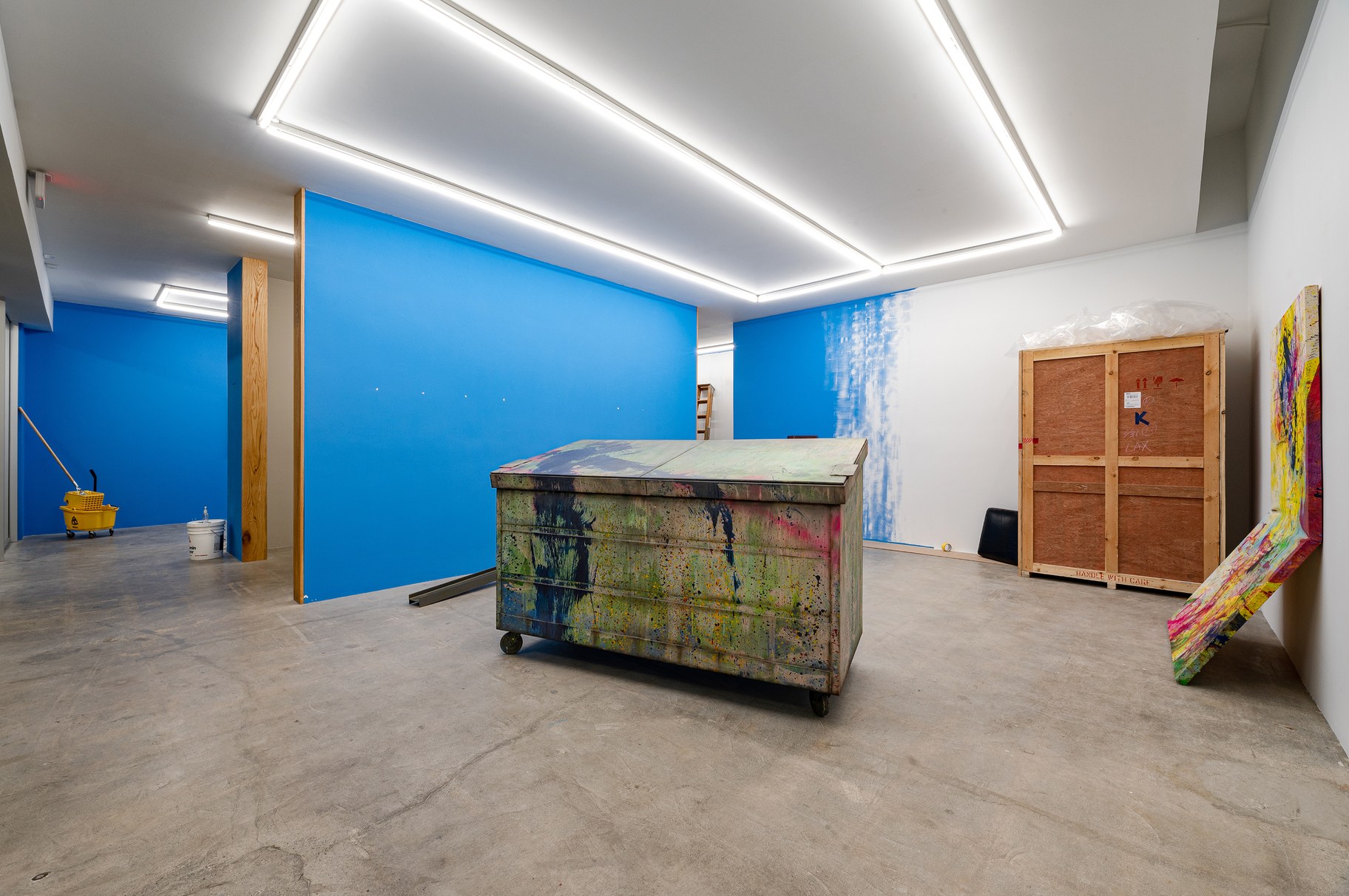 Kaz Oshiro, “96375” at Nonaka-Hill (installation view). Image courtesy of the artist and Nonaka-Hill.

Before Kaz Oshiro’s solo exhibition was installed at Nonaka-Hill, the gallery was painted a peaceful blue, and Sōfu Teshigahara’s delicate ikebana sculptures were placed on a serene bed of rocks.

Yet with Oshiro, nothing is quite as it seems. Rounding the corner of the back side of the dumpster — which is expressively painted with colorful Abstract Expressionist flair — it becomes clear that it is, in fact, a painting. The slap-dash installation suddenly snaps into view as highly specific. Every screw hole and tape roll becomes a small composition to study. Other “paintings” come in forms of seat cushions, speakers, I-Beams, and trash cans. These are mixed with found objects like paint rollers, screws, and buckets to further complicate Oshiro’s illusion.

A previous press release for a show at Honor Fraser Gallery explained that “Oshiro is most interested in what he calls ‘dirty minimalism,’ a variation on the aesthetics of minimalism that allows for subject matter beyond the artwork itself.” And a series of monochrome paintings in the second gallery literally look dirty, as if the installers covered them with dust and hastily tried to wipe it off — all part of Oshiro’s slick trompe l'œil. 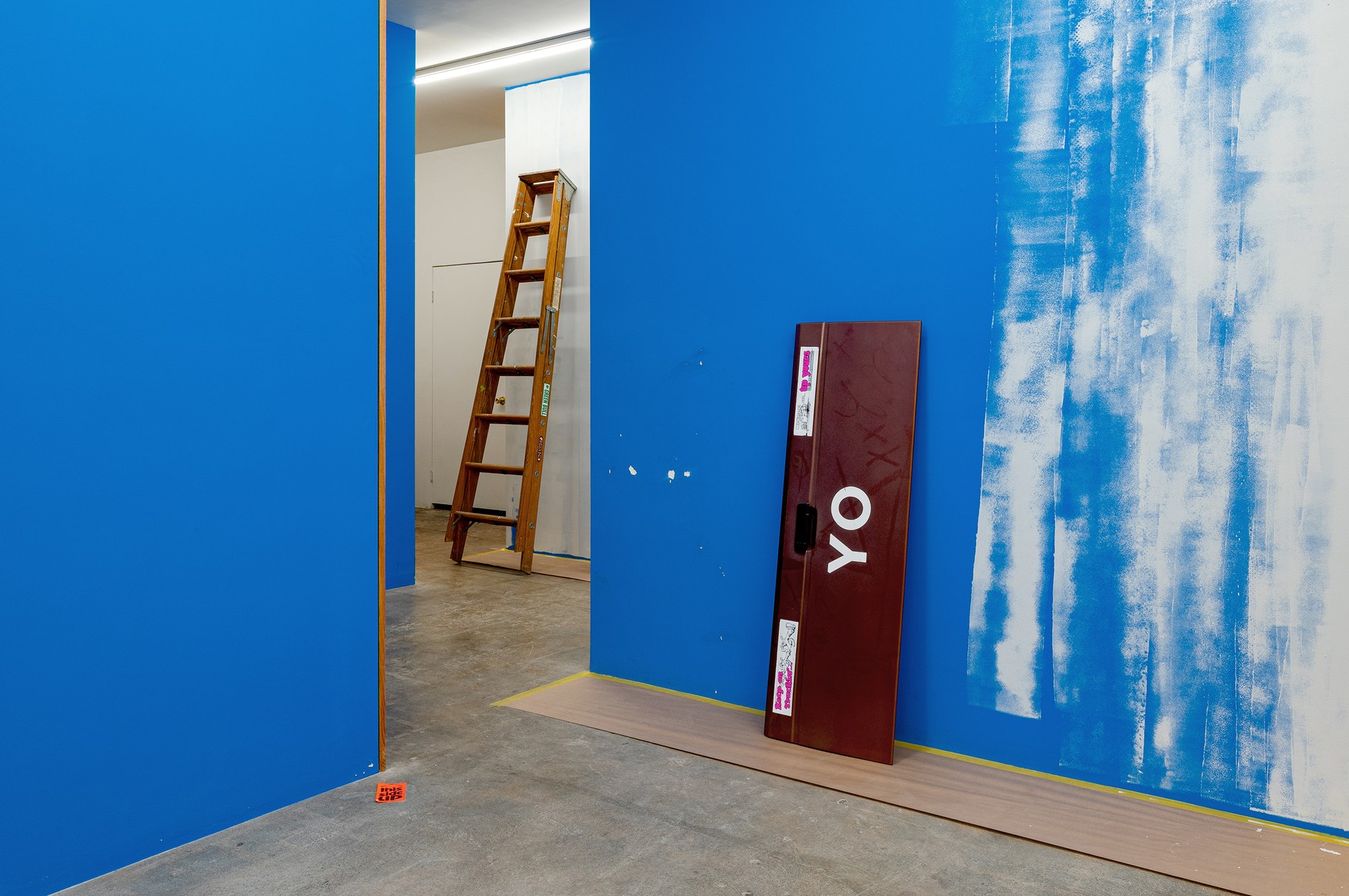 Kaz Oshiro, “96375” at Nonaka-Hill (installation view). Image courtesy of the artist and Nonaka-Hill.

Oshiro grew up in Okinawa, Japan, which has been under U.S. occupation since World War II. Root beer, hamburgers, and fries made their way into Okinawan restaurants.

In thinking about American cuisine being reproduced by Japanese restaurants and then subsumed into Okinawan culture, Oshiro became fascinated with the idea of “discrete copy.” He explains, “Since the canvas itself is a work of art, I wanted to make painting that is discreet. Like a suitcase left on the floor. Probably people wouldn’t notice what it is because I leave it in the corner. Before they find out it’s a painting, they walk away. I think that would be a great compliment.”

Senga Nengudi adapts her artwork to the changing times 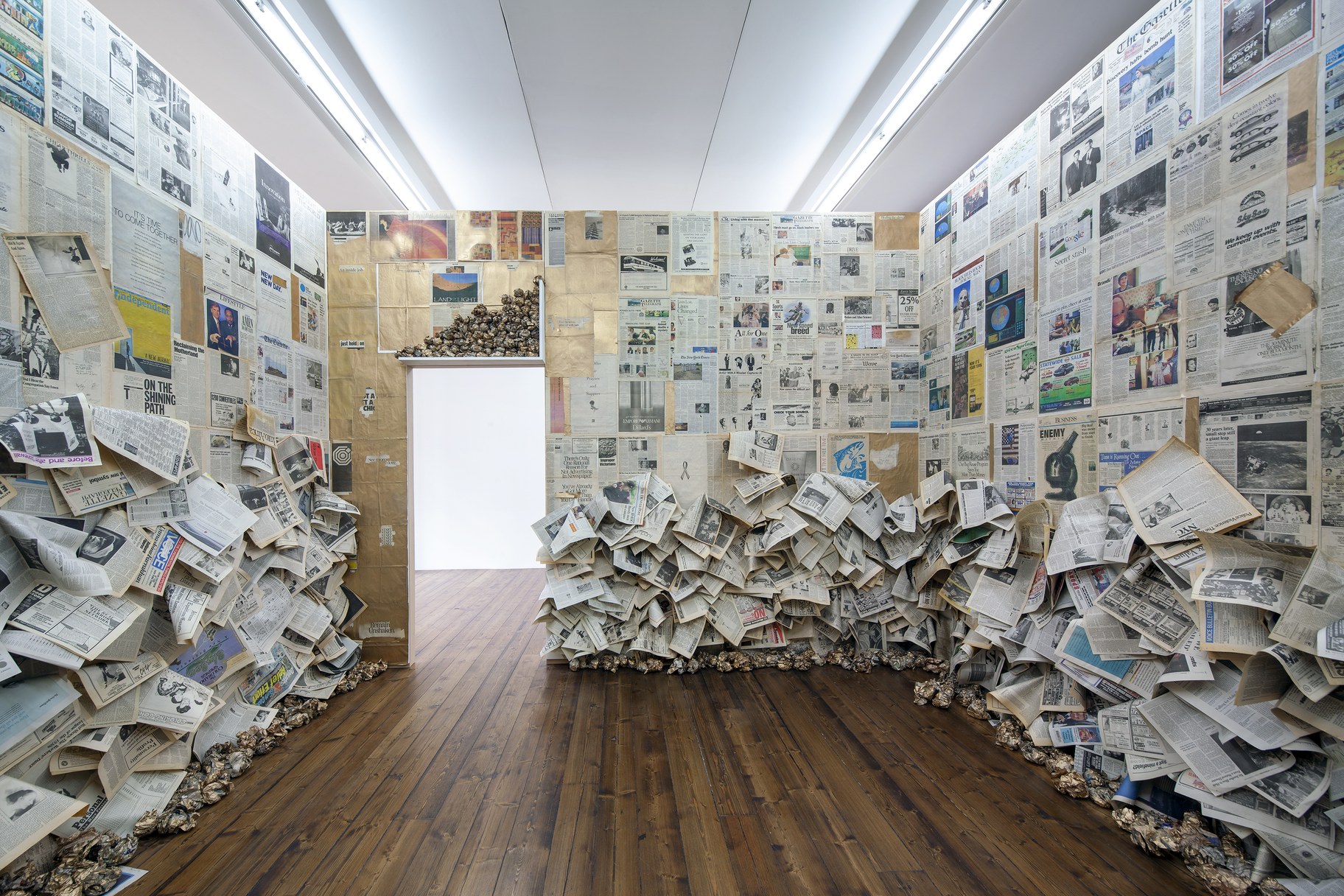 Artist Senga Nengudi has a solo show at Sprüth Magers gallery, which includes two large scale installation works. Nengudi is a dancer and performer, but has always focused on materials and sculptures. Her work has previously addressed issues of race and gender, but takes on new relevance with the Black Lives Matter movement. For “Sandmining B,” included in the exhibition, Negudi added a sound piece which directly responds to the lives lost at the hands of police. I talked to Jarrett Hill about the exhibition, and how Nengudi adapted this installation to respond to our current moment.