Cammie Staros, “What Will Have Being,” installation view. Image courtesy of the artist and Shulamit Nazarian, Los Angeles.
Photo by Morgan Waltz.

This week’s art picks include neon aquariums that blend the ancient past with an apocalyptic future, reflexology mats that encourage rest and reflection, and a virtual art pavilion that goes underground. 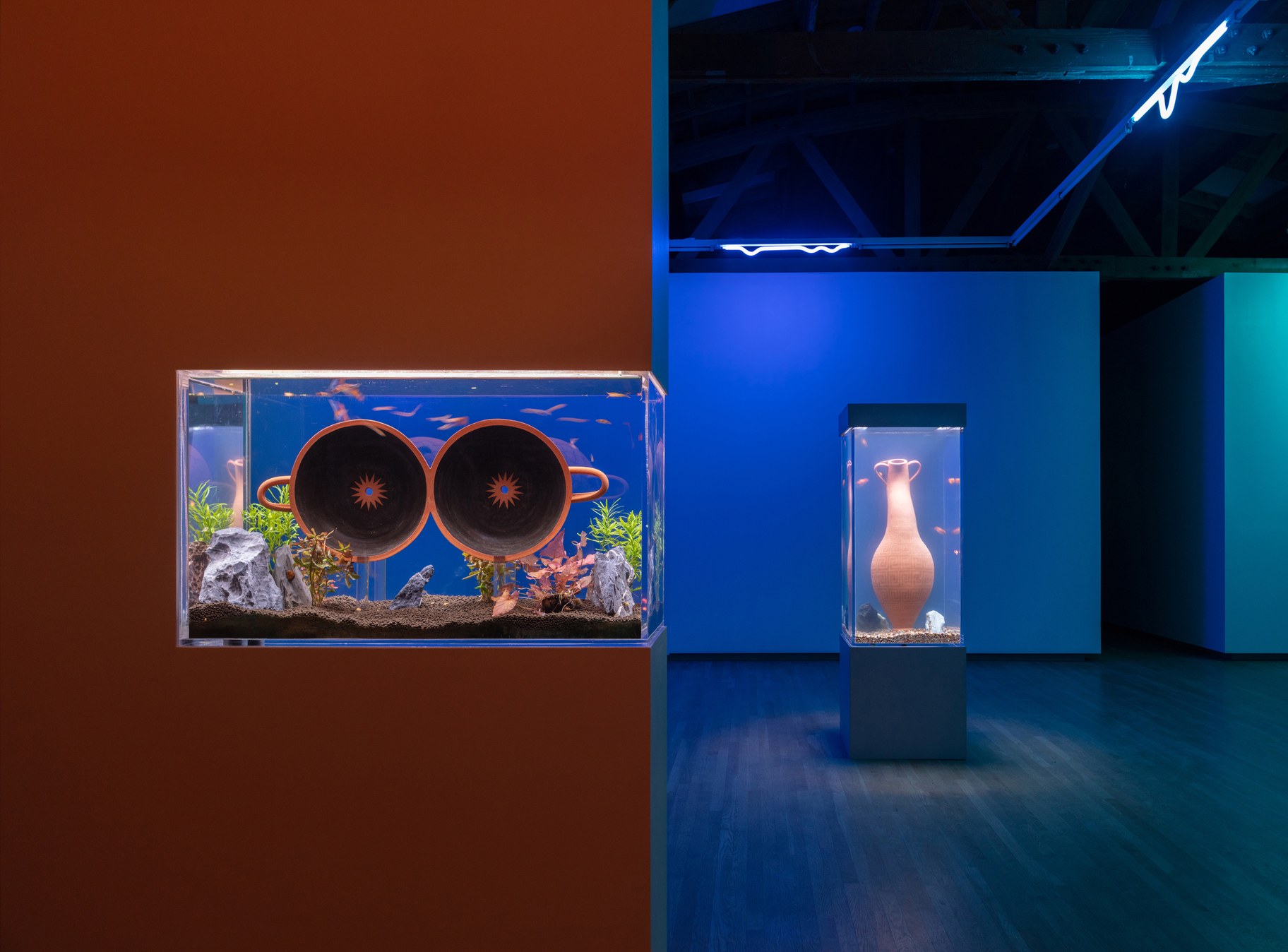 Cammie Staros, “What Will Have Being,” installation view. Image courtesy of the artist and Shulamit Nazarian, Los Angeles. Photo by Morgan Waltz.

After endless months of home-bound isolation, I have been experiencing a bit of over-stimulation when I leave the house. Graciously, Cammie Staros’ current exhibition at Shulamit Nazarian slowly brings viewers into a soothing and mystical realm where fish swim with waving vessels and colored neons slowly shift our perception of color over time. The artist riffs off of museum-displays with a series of dramatically spotlit aquariums set into pedestals or walls. A ceramic sculpture resides submerged into each watery landscape, creating explorative spaces for whirling minnows or bulging goldfish. The vessels are loosely modeled after Grecian vases. But Staros’ objects are bent and warped, as in “Futurum Fluidum,” whose image resembles a Greek amphora from one view, and a curvaceous bodily profile from another. Colored neons installed above the playful pieces create the illusion of LED lights that are dripping out of their linear forms, and create a subtle shift in color from blue to aquamarine in the main gallery space. The second gallery space abruptly shifts to warm red lighting, and devoid of any aquariums gives the space a dry and earthen feeling. Central here is “Concha Clavata,” a large open vessel filled with a series of spiky teeth, subtly referencing the sarlacc sandpit creature from “Star Wars.” This shift in energy between both gallery spaces — from fluid and peaceful to crusty and somewhat threatening — lend an ominous overtone to the exhibition’s overall soothing nature, perhaps alluding to the eventual potential of a world devoid of humans, in which flora and fauna slowly rehabilitate the artifacts left behind. 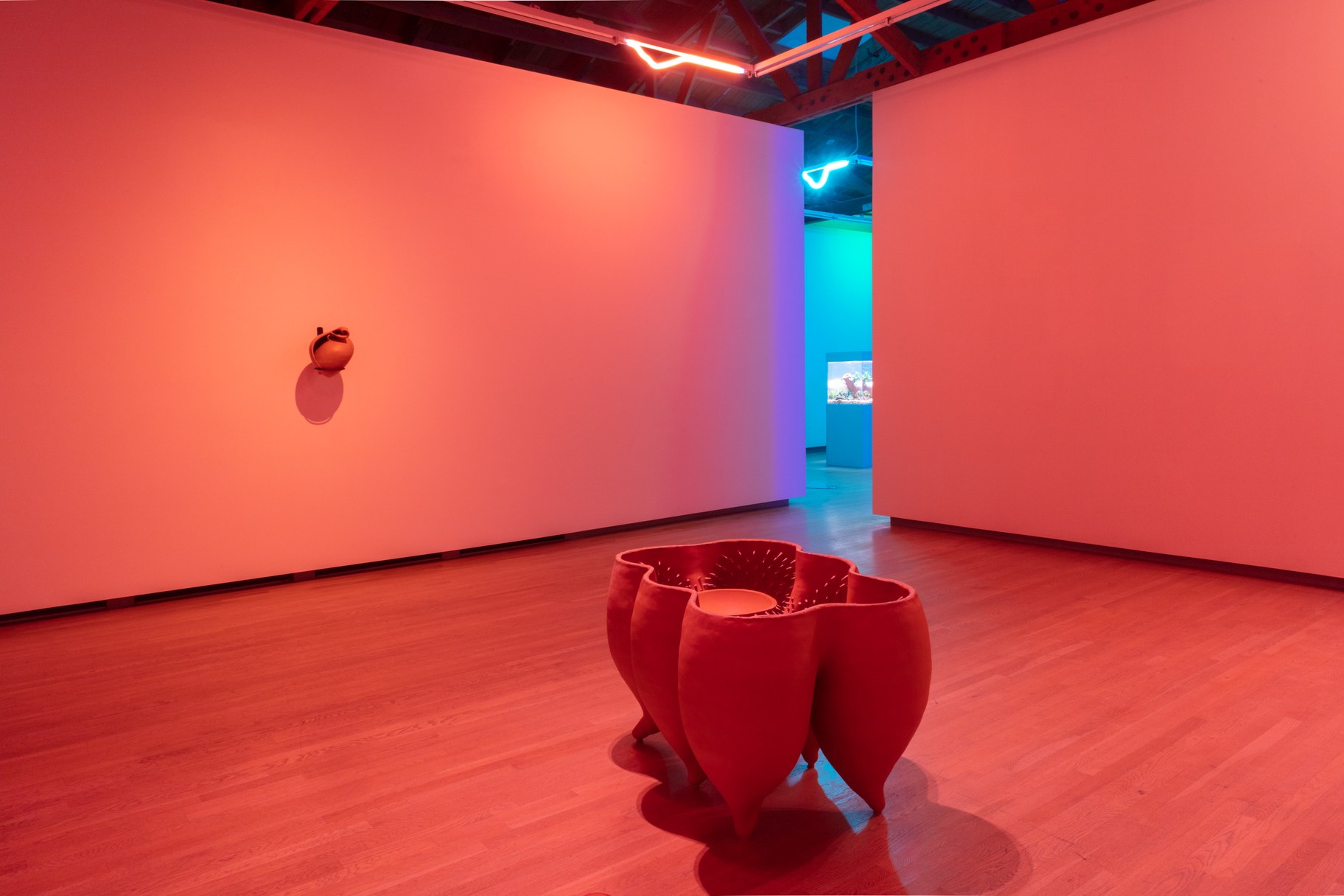 Cammie Staros, “What Will Have Being,” installation view. Image courtesy of the artist and Shulamit Nazarian, Los Angeles. Photo by Morgan Waltz.

While visiting the gallery and staring at a happy goldfish bubbling around, I talked to Staros about her use of ancient vessel shapes. “Relics and ruins have this amazing ability to both take us into the past and also raise questions about the future of today’s objects,” Staros explained. “I started to think about The Met or The British Museum abandoned and reclaimed by nature over time.” The practice of museum collecting is one that Staros muses on often, considering "the idea of how we got to contemporary art, that art history is not neutral, and it adds to the creation of influential lineages along the way -- both ones that are perhaps overly celebrated and others often excluded. I try to touch on that narrative quality of history-telling with references to Greek antiquities because I think those artifacts serve almost as an origin story of Western art history." While museum collections largely sit quietly in storage or exhibition spaces, Staros wanted her vessels to be fruitful and contribute to their environments. She says, "I was thinking about what could happen after political or climate crises, but I also wanted to make ceramics that I could fill with water and life so that they have a generative aspect to them, and feel like something that is fertile and alive.” 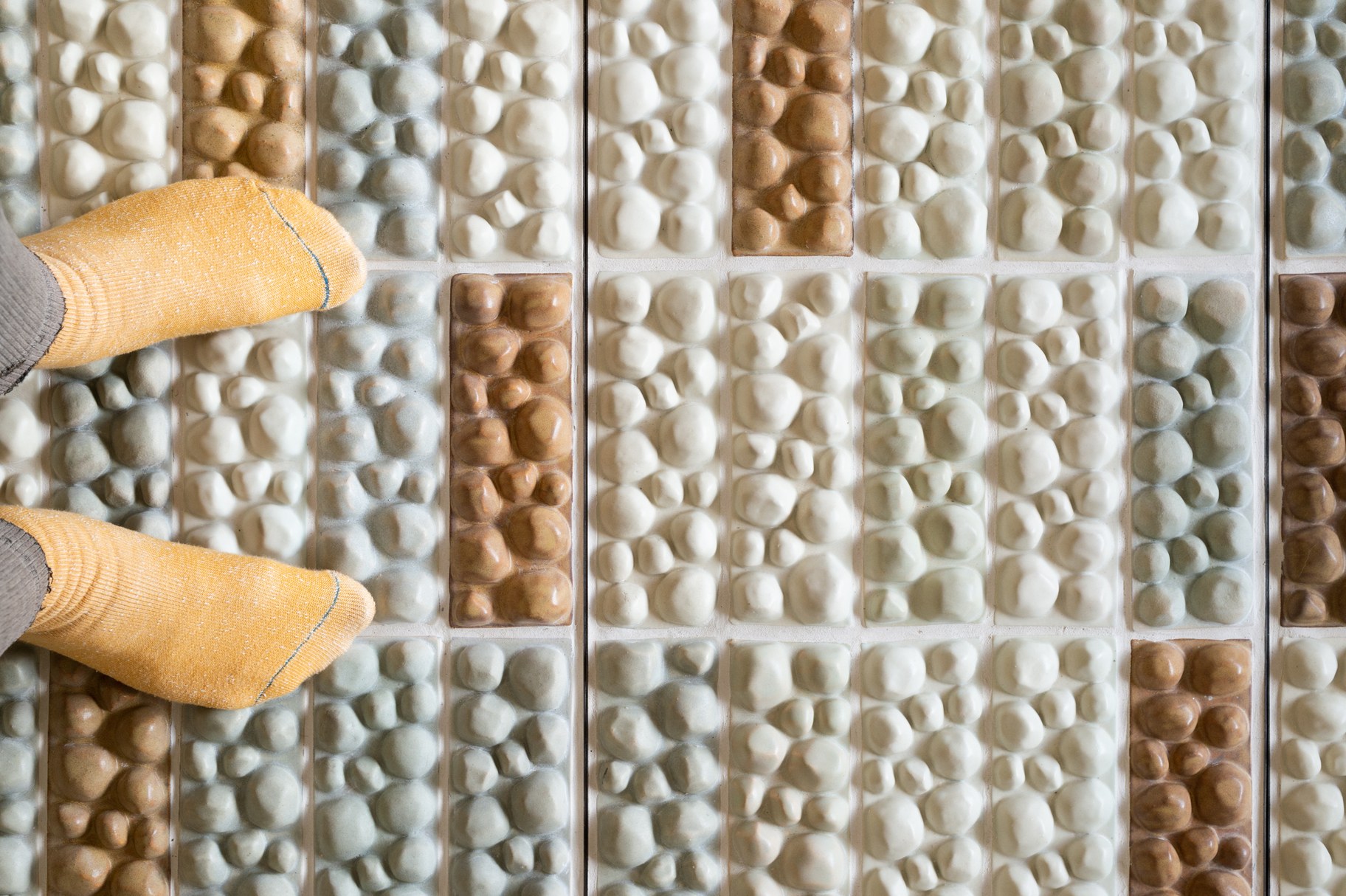 This year, many of us have doubled down on self-care and comfort: more sweatpants, weekly face-masks, or extended cuddle-time with our dogs. Timed nicely with our collective need for de-stressing, Erik Benjamins’ exhibition titled, “For Modern Resting,” highlights just that. Inspired by Japanese reflexology paths — stone mosaic walking paths installed in public areas — Benjamins’ “Reflexology Doormats” are doormat-sized and made of bumpy ceramic tiles. If you happen to be wearing a pair of socks — don’t be gross and be sure to wear a pair of socks! — you’ll be invited to walk across the platforms, in a soothing yet slightly rigorous experience of massaging your foot’s various pressure points. Each “mat” includes text scrawled on the side of its metal frame — “A bowl of nectarines,” “Boomboxed Playlists,” “Among Baltic ruins” — creating additive poems whose lines reorient themselves depending on the order they are read. Benjamins has also been writing poetic odes inspired by illustrations of suns that he comes across in his everyday life (on a washed out bumper sticker, a logo on a soda can), and has airbrushed some of these lofty odes on the gallery walls. “Well weathered blissed out bus mascot,” one reads. Together, the texts seem to encourage open-ended reflection, and heightened awareness of the things around us. A collaborative edition the artist made with Shannon Finnegan — two other artist collaborations are included elsewhere — is a sunny yellow chair cushion that sits on the gallery’s bay window and reads, “I need softness. Rest here if you agree.” Don’t mind if I do. 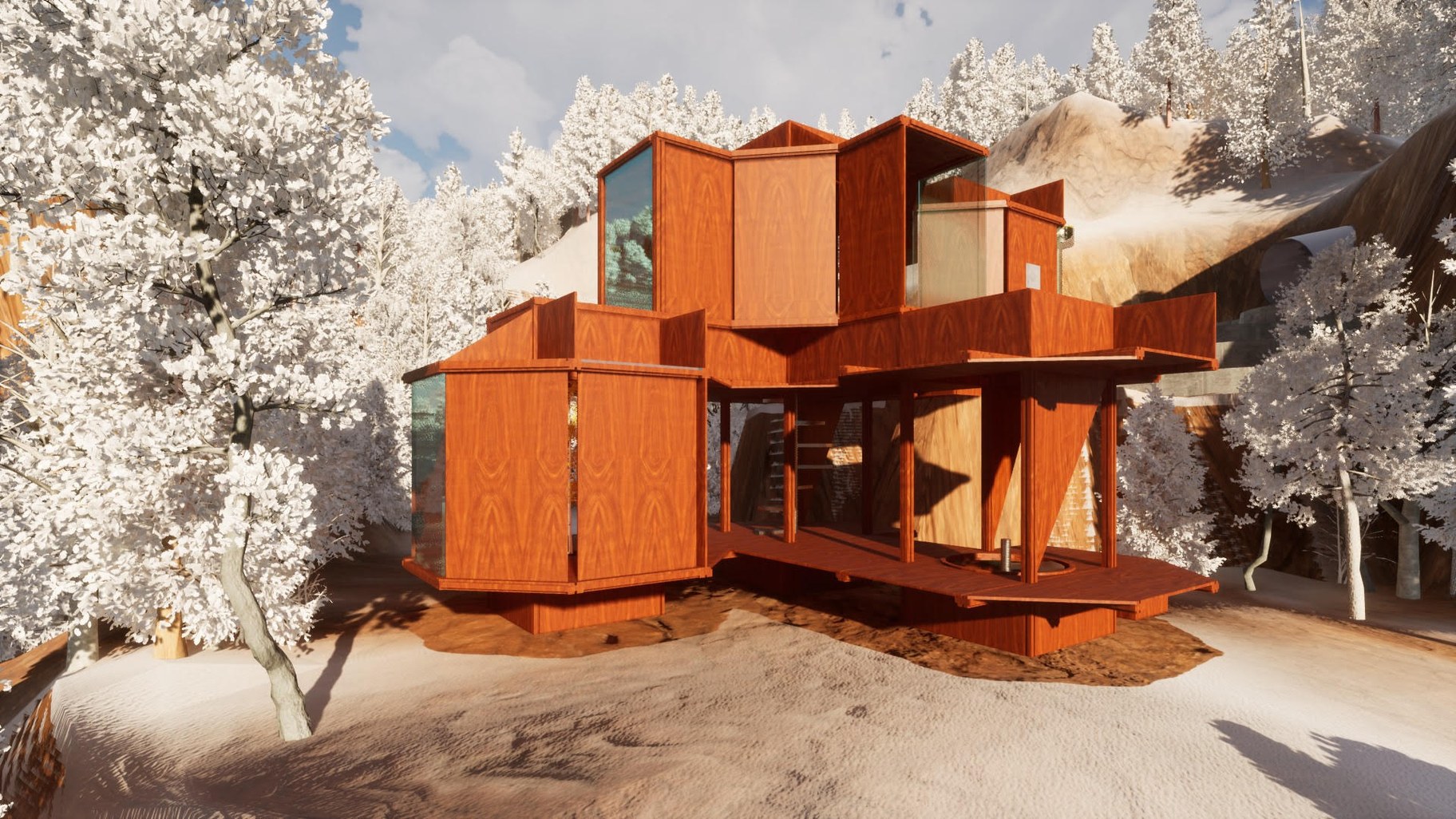 “Substrata” at Epoch. Image courtesy of the artist and Epoch gallery.

Early in the pandemic, Epoch gallery began rethinking the limitations of physical viewing, and offering an inventive digital platform for viewing instead. Navigating through the virtual space is not unlike a first-person video game, and each exhibition shapeshifts to take on a new architectural form and virtual environment, keeping the act of maze-like discovery at the forefront. The architecture for the current show, “Substrata” — which is set in a nondescript snowy glade — was designed by Alice Könitz of Los Angeles Museum of Art (LAMOA), another artist-run, shape-shifting exhibition venue. Navigating through Könitz’ virtual pavilion is a warm, light-filled experience that delights with angular and wood-grained surfaces, and surprisingly sends the viewer down a series of spiraling staircases until you finally arrive in a looming cave, artwork dappled throughout. While artworks are splayed throughout all of the many above-ground and sub-terrain levels of the structure, the bottom cave level feels particularly meta — a sound piece by Nikita Gale layers echoed screams, highlighting the eeriness of the space, and a neon work by Kristin Posehn is in the shape of gothic architecture’s flying buttress, yet here it is non-functional, buttressing nothing. Elsewhere, Paul Pescador, Patricia Fernandez, Heana Yoo, and others delve into various constructs and systems, whether gender, time, or consumerism.