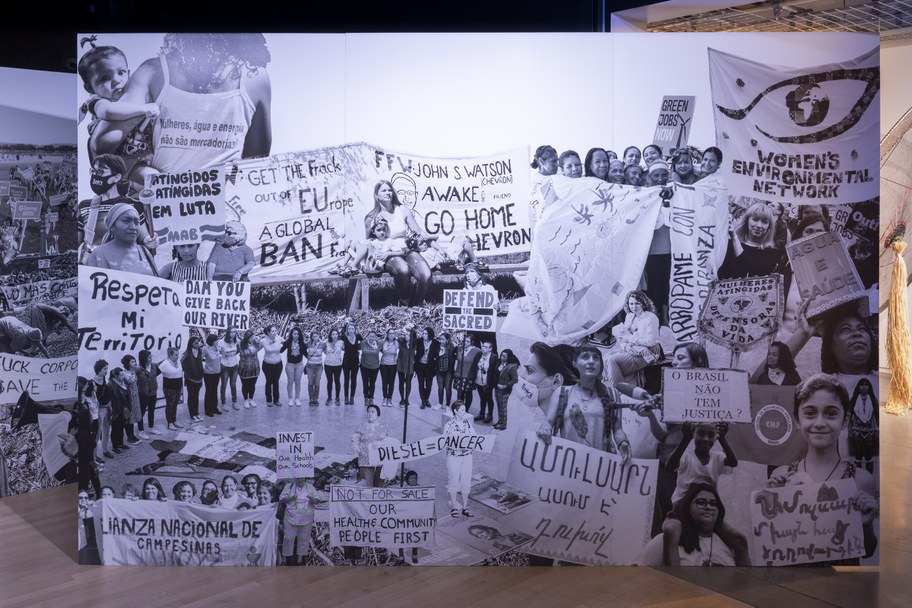 Carolina Caycedo’s new exhibition, “Care Report” at Oxy Arts, was designed to be viewed from the streets. As many institutions are still shuttered due to COVID-19 restrictions, Caycedo refocuses her work to the vantage of the passerby, allowing for both safe viewing and reaching a wide array of people who may not frequent art spaces.

The largest work in the show is a powerful black and white collage that features images of over 60 women-led organizations in protest or on the front lines of environmental struggles around the world. The women hold signs and gather in solidarity. One woman holds a protest sign while knee-deep in water with a baby strapped to her chest. The collage collapses various groups fighting for unique causes (their protest signs are written in a range of languages), yet they are connected by their gender, their power, and their fight.

“I contemplate the intersections and the connections between these global movements,” Caycedo explains. “Though their particular struggles are contextualized in their own territory — in their own country, in their own mountain range, in their own river — what connects these movements are they’re led by women.” She goes on to explain that it is no surprise to her that women are often on the front lines of fighting for basic rights, as they are often the ones most affected by environmentally extractive industries. The exhibition can be viewed at 4757 York Boulevard. 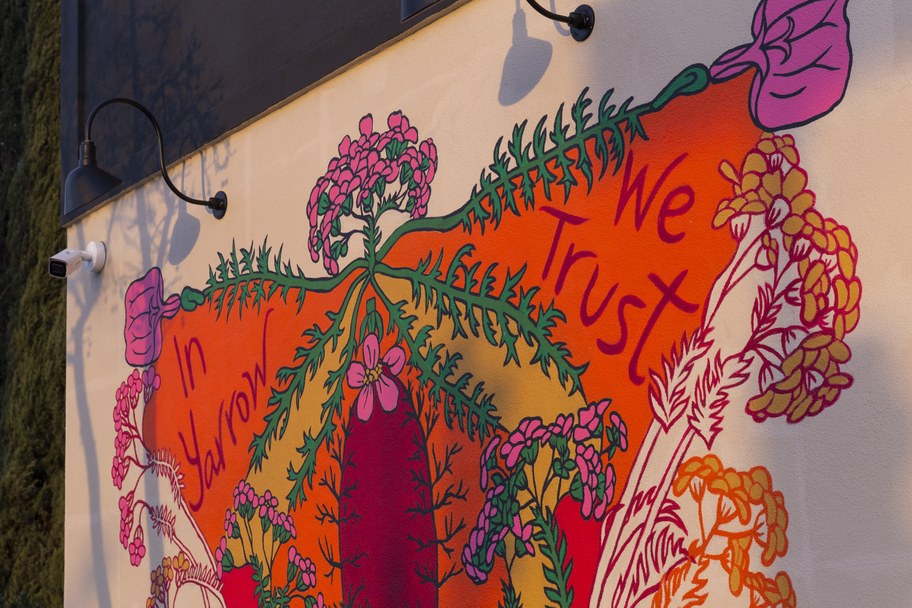 Carolina Caycedo, “In Yarrow We Trust,” 2021. With Tracie Escobar and Claire Lau. Acrylic paint on stucco, 18.5 x 12 feet. Image courtesy of the artist and Oxy Arts. Photo by Ian Byers-Gamber.

Women as healers and providers

On the outside wall of the gallery, a large floral mural features a brightly-painted symmetrical plant and reads “In Yarrow We Trust.” In a short walkthrough video accompanying the exhibition, Caycedo explains that she created the mural with two students, and the piece is the beginning of a wider series called “Plant Portraits,” in which plants are celebrated for their healing properties.

Yarrow has many health benefits, including uses for female reproductive and sexual health. Caycedo explains, “That’s why I decided to include that specific plant in the show as we are exploring various female and feminist issues in the exhibition.”

Other works — also meant to be viewed from the gallery’s large street-facing windows — continue to put female reproduction in the foreground while focusing on power and autonomy. A large sculpture made from a fishing net, “Milk,” loosely resembles a breast with milk (rendered with raffia) flowing down. This paired with the collaged images and medicinal plants presents a powerful portrait of women as healers, providers, and defenders of their communities. 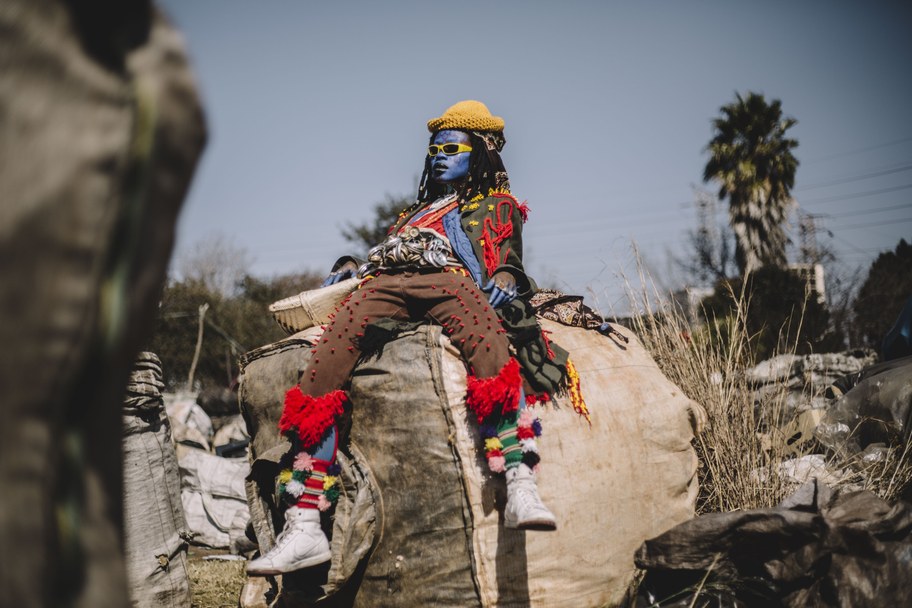 Many of us have turned towards our gardens over the last year — whether for sustenance, a new hobby, or just the opportunity to have a physical connection with another living thing. “GARDEN” picks up on that energetic focus, delighting in sumptuous depictions of human-garden interactions that highlight the restorative and nourishing aspects of the garden.

Organic energy builds across the works, which range from painting to photography, to sculpture and video. Some works approach plant life obliquely through abstraction, as in Meike Legler’s graphic sewn fabric piece. Many other works take the form of landscape, such as Rachel Kessler’s “Wildfire” that erupts with dynamically painted layers like a complex origami creation. Many paintings and photographs feature entwined limbs interacting with plants or soil, pointing to a bodily and spiritual connection to Mother Earth. It all indicates that the practice of gardening offers deeper resonance than simply sowing seeds and tending to them. 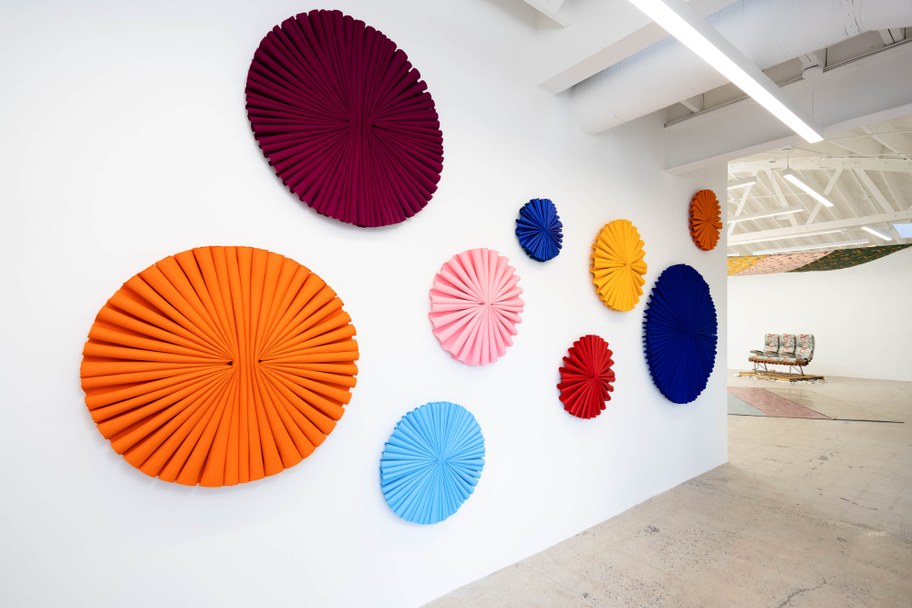 Anat Ebgi opened their new Wilshire gallery space in early December with a group show called “Good Company,” co-organized with former MOCA's former Chief Curator, Paul Schimmel. As if the usual six-week exhibition wouldn’t quite mark the milestone, the gallery has stretched the exhibition out through May, rotating the works and artists to form three back-to-back shows.

While the exhibition largely celebrates the gallery’s growing roster of artists, it also looks back at Anat Ebgi’s 10 year history, while also including a couple of artists that have shown in the new space prior — the space was previously Marc Foxx gallery. Across the three exhibitions, various artist pairings allow for surprising and subtle throughlines to emerge. It’s the last week to catch the current iteration called “The Remix,” where you’ll be greeted by Samantha Thomas’ colorful pleated canvas works.

In the gallery space, Cosmo Whyte’s re-upholstered airline chairs give the seating a floral upcycling. The chairs sit on a pallet above a pile of broken china. They’re flanked by Neil Raitt’s oil painting “Cayambe (Arizona Edit),” in which a desert landscape repeats itself across the canvas, as if drawn using the “clone stamp” tool in Photoshop. 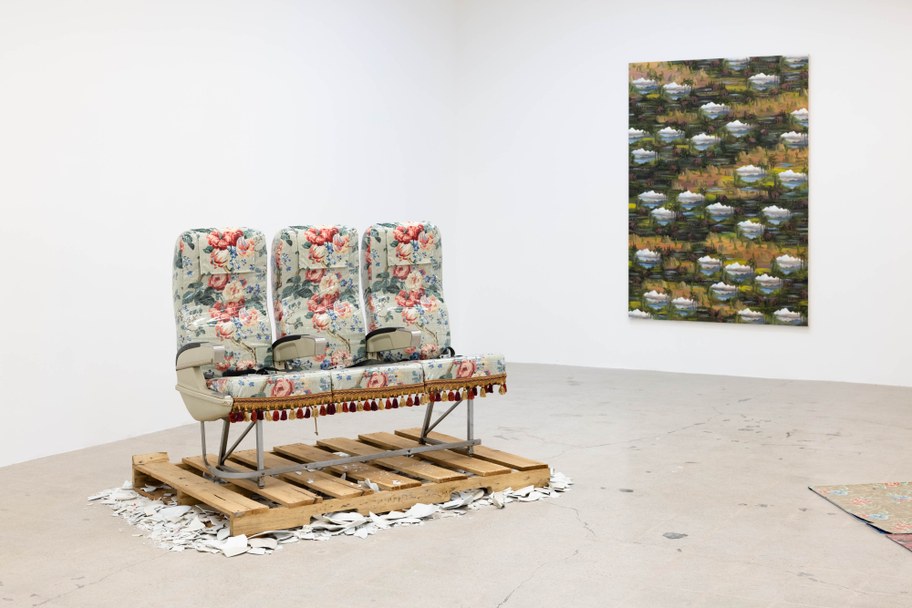 Tina Girouard’s central installation is a large banner made of floral fabrics that hangs parallel to the ground, mirrored by linoleums in matching florals on the floor below. It provides a central thesis of sorts: Across the show, nature is hemmed in by human-intervention and manipulation.