This art week’s picks include an artist’s Afrofuturist vision of utopia; textural paintings that highlight the pandemic-induced emotions; and ceramic forms made from simulated Martian soil. 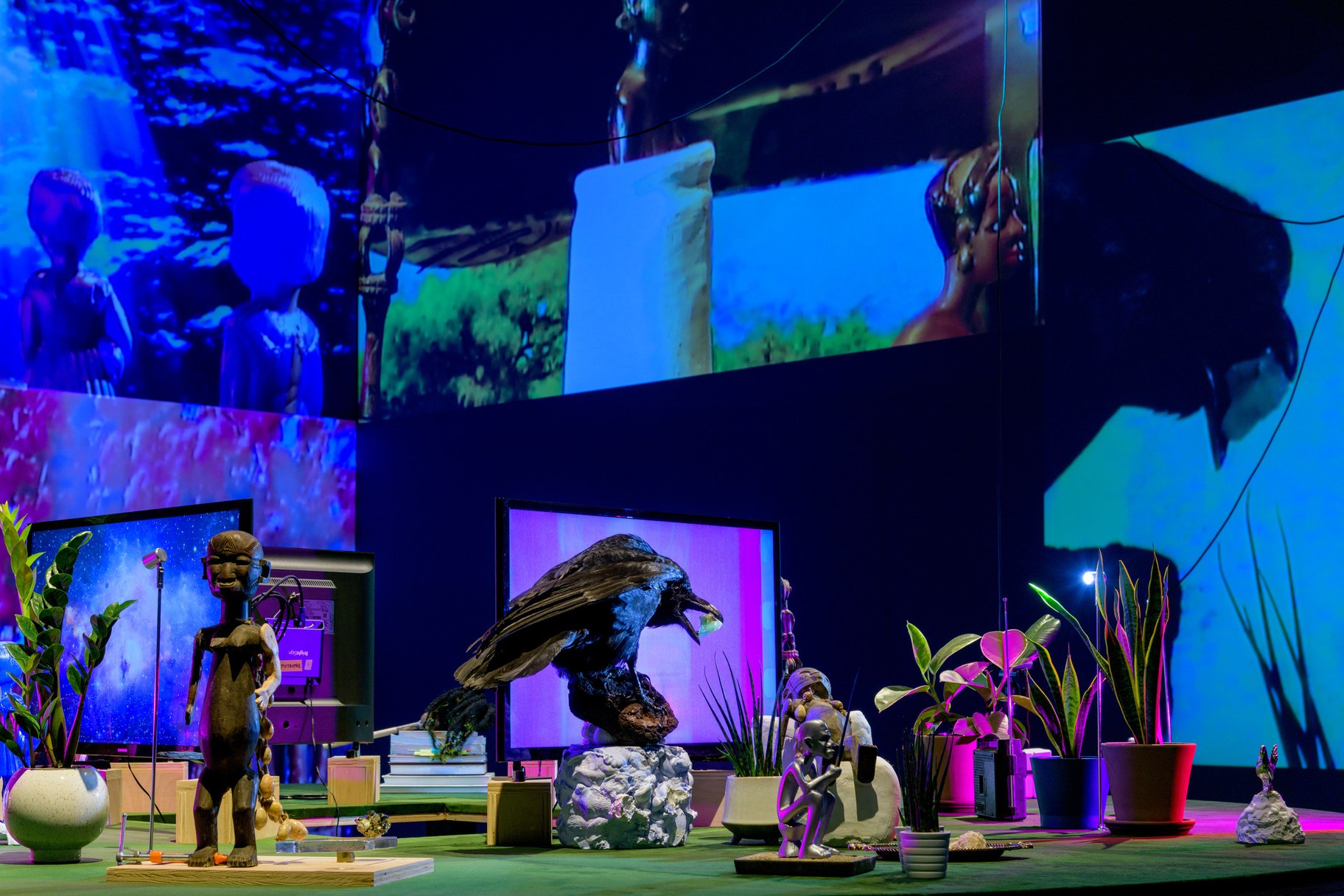 LACMA is still closed due to County COVID-19 restrictions, but the museum recently installed a handful of new shows that I got to get a sneak peek of last week. The highlight was a solo exhibition by Cauleen Smith, “Give it Or Leave It.” The exhibition ruminates on various sites where Smith felt that radical generosity and community-building occurred. A metallic wallpaper collapses these sites into a repeated pictorial pattern: The Watts towers, Alice Coltrane’s ashram, Noah Purifoy’s desert assemblages, and spiritualist Rebecca Cox Jackson’s Shaker community.

“What does a really radically generous community and intentional world building look like,” Smith asks in a short video interview produced by SFMOMA. “We’re generally cynical about ideas around utopia, like ‘oh they never work’...but there have been instances where people have built intentional communities that were really successful.”

Within central themes of community and Afrofuturist utopias, the epic installation “Epistrophy” features various objects, figurines, books, and sculptures staged around a central circular table. Plants, taxidermied ravens, minerals, wooden and plastic figures, and even a Magic 8-Ball, are arranged carefully into still-lifes doused in sprays of blue and pink light. Four central tableaux occur around the large table, each one presented in front of a video monitor that cycles through various imagery or natural landscapes behind the objects. Near each, a CCTV camera captures each vignette, and live-broadcasts them via a series of projectors onto the gallery walls. The projections pick up the changing-landscape videos in real-time allowing for a doubling of bright-colored content across space. Significantly, the live stream videos do not capture all of the objects on the table, rather only a couple of blurry silhouettes staged in front of each monitor make it into the large projections. This fact causes a push-and-pull between what we see, what is in front of us, and how that information is represented. Smith is adept at allowing her work to embody various research and interests, from musicians to sci-fi to utopian visions, allowing her work to collapse each touchpoint in new and surprising ways that allow the viewer to project their own futurist visions onto the work. 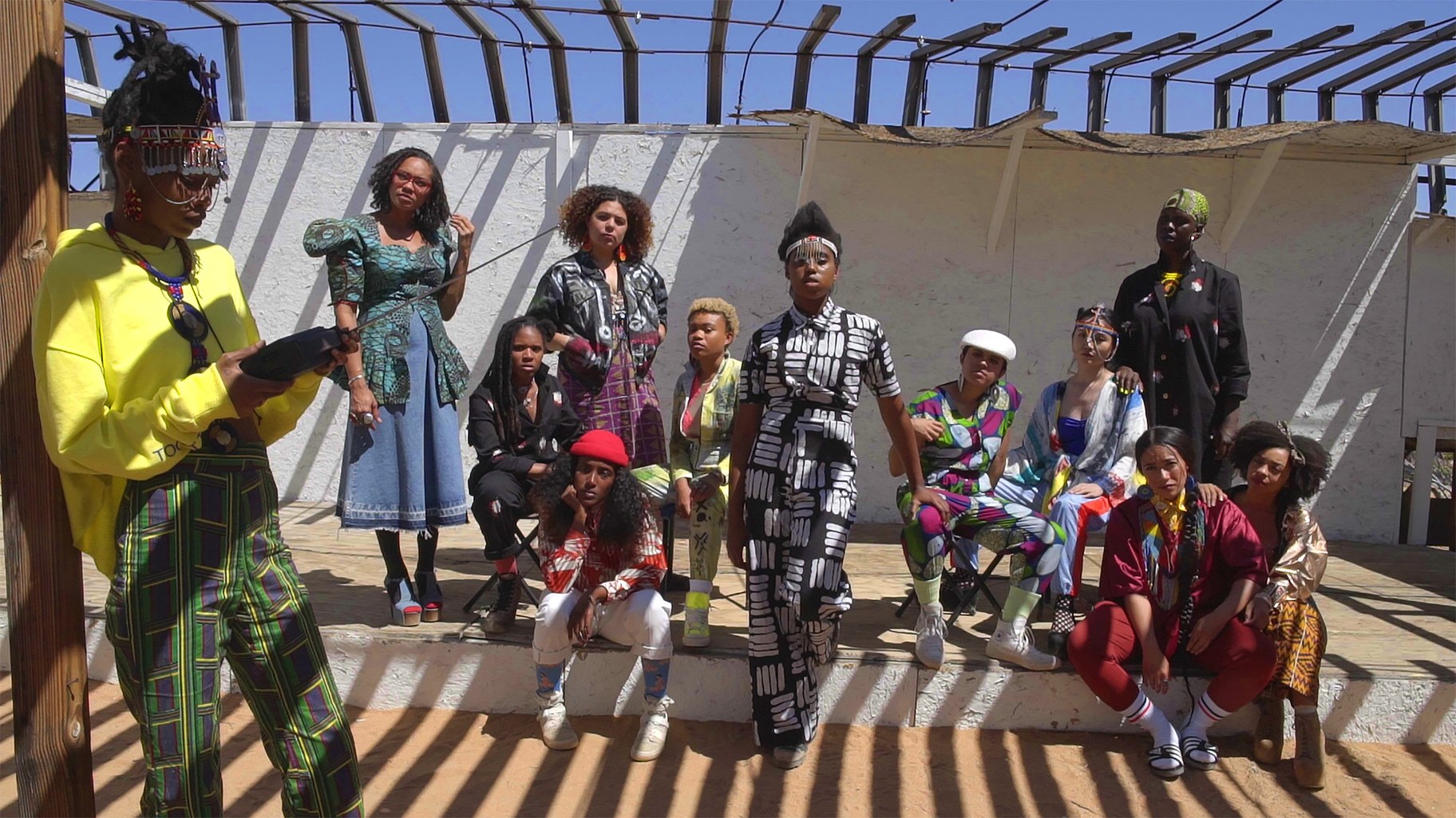 During her research of utopian sites, Smith stumbled across photojournalist Billy Ray’s image of a group of Black men lounging casually at the Watts towers.  In her piece “Sojourner,” Smith restages this photograph using women of color and sets the photograph inside Noah Purifoy’s installations at his outdoor museum in Joshua Tree. Layered in the film are spoken words lifted from Alice Coltrane lyrics. Smith explains that the text lists all the different ways black women are routinely marginalized and dismissed — “the only people who are going to save us are us.” In the film, the group of women congregate and walk through the outdoor museum at sunrise, modeling a beautiful collectivity. “It is possible to build a better world,” Smith explains. “It’s possible to be generous; it’s possible to build something that’s not only good for yourself but for others; it’s possible to leave something behind. It’s just possible to make a better world — people do it all the time.”

Mike Cloud and Sam Jablon at the Landing 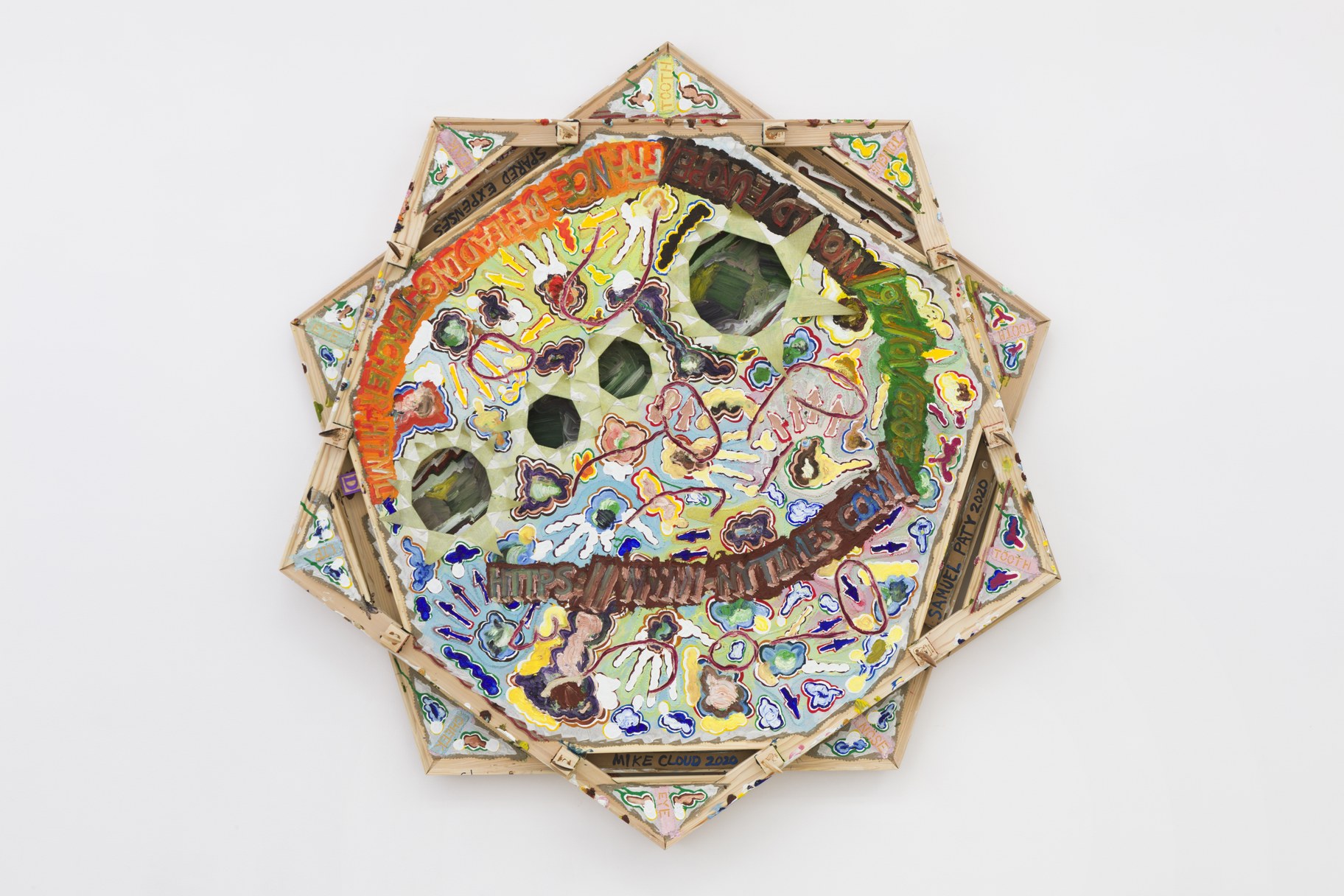 In a new two-person exhibition at the Landing Gallery in West Adams, work by artists Mike Cloud and Sam Jablon explore exciting material innovations while also musing on the turmoil of the last year’s events. Jablon incorporates pertinent text into each of his paintings, playing with overlapping or inverted letters to slow down readability. “Endlessness'' features backward yellow text painted on a rich blue background, spelling out “Endless Endlessness.” Several letters towards the end of the phrase seem to evaporate into yellow mist. Is it a call to the sheer ongoingness of the pandemic, or perhaps a nod to certain air-born particles? Other works like “Don’t Panic” and “Linger Longer” feel almost like notes-to-self, or repressed desires after a year-long quarantine.

Cloud’s paintings can hardly be categorized as such — each is a layered sculptural construction that uses stretcher bars as the dimensional framing devices, used to build stacked visual planes of painted color and form. The dense and thickly applied maximalist color and a general slap-dashery of the works — exposed stapes, roughly cut edges, bits of paint globbed on the edge of each, as if the artist casually used his own painting as a palette — belie the intrinsic careful composure of each work. In each, a URL, often painted in a long swirling spiral, is included on the painting, providing layers of literal embedded context. The websites that each work points to range drastically in content, tone, and banality. Some casually discuss adopting a puppy, potty-training tips, or how to make a grocery list, while others delve into violent beheadings, mass extinctions, or celebrity deaths. This shocking onslaught of disparate information — paired with Cloud’s cacophonous aesthetic— mirrors the way we absorb media in our modern day, where a playful cat video might preclude violent images of insurrection on one’s Instagram feed. 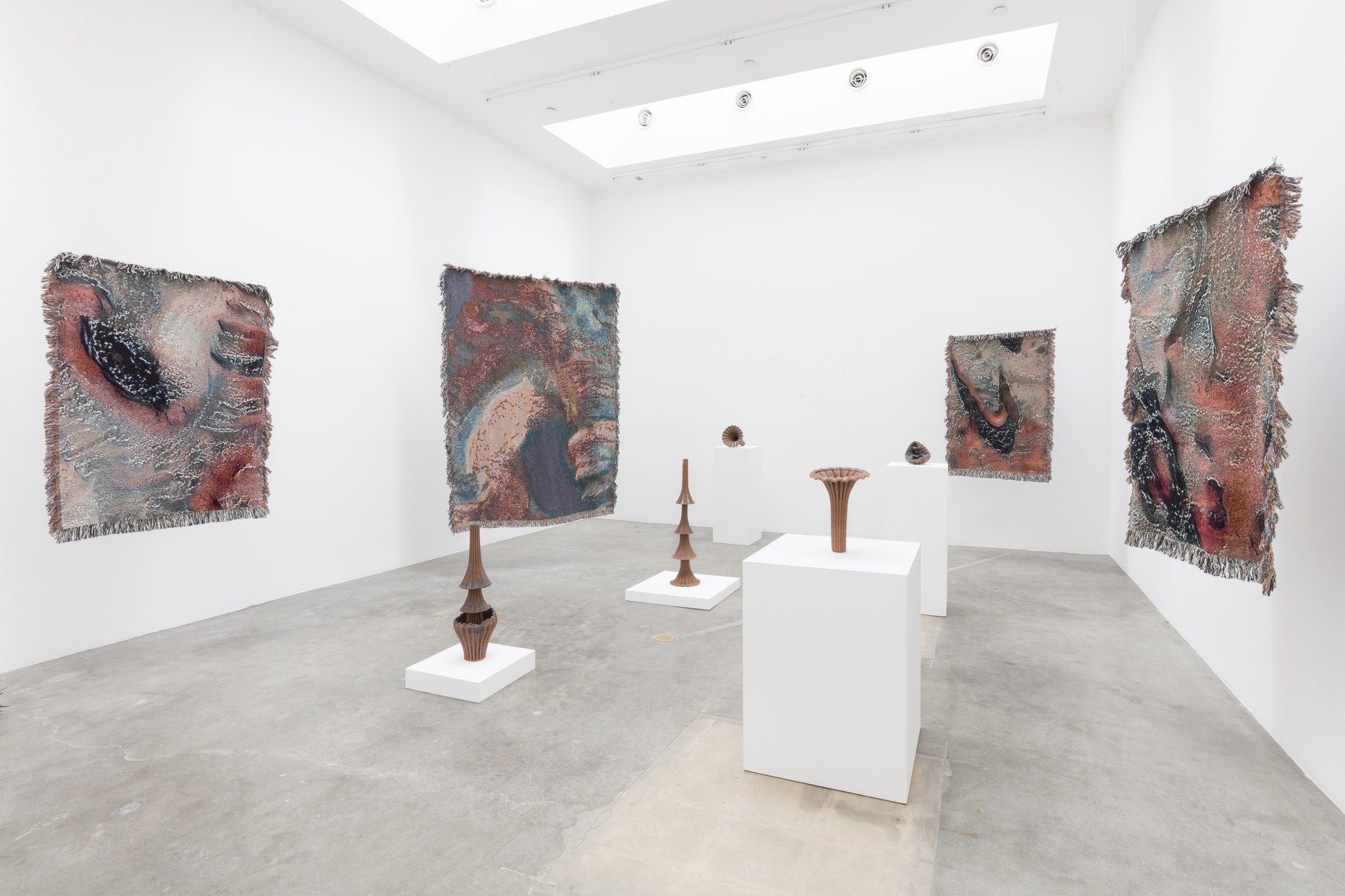 At Blum & Poe, a solo show by Sarah Rosalena Brady explores the artist’s Huichol and Laguna Pueblo heritage alongside ideas of sci-fi futurism, AI and technology, and post-apocalyptic survival. The exhibition is part of a new gallery initiative called Galleries Curate, and was organized by Mika Yoshitake. A series of Jacquard-woven (a computer-guided loom) tapestries, features satellite imagery which maps climate and water variations on Mars. The warm colors and inviting textures of each tapestry feel at odds with the abstract yet cosmic imagery that each contains. A series of ceramic works, also made with technological aid via 3D printer, explore Indigenous coiling techniques, although their “clay material” is in fact “Enhanced Mojave Mars Simulant 2 (MMS-2)” a chemical material that is produced to mimic Martian soil. By using spiritual and traditional vessel forms and blending them with a synthetic material, Brady points us to the past while cautioning towards the future — she points to the terrors of climate change and the human impulse to ignore ancient wisdom while inventing our way out of the crisis instead of confronting it head-on.