Jeffrey Gibson, “THE LOVE YOU GIVE IS THE LOVE YOU GET,” 2020. Punching bag, glass beads, artificial sinew, acrylic felt, 50.5 x 14.5 x 14.5 inches.
Image courtesy of the artist and Roberts Projects, Los Angeles, California.

This week’s picks include an artist who melds tradition, craft, and pop culture to create inclusive and uplifting messages; artworks that start on iPhones and end up large scale; and a group show that insists that humans are not the center of the universe. 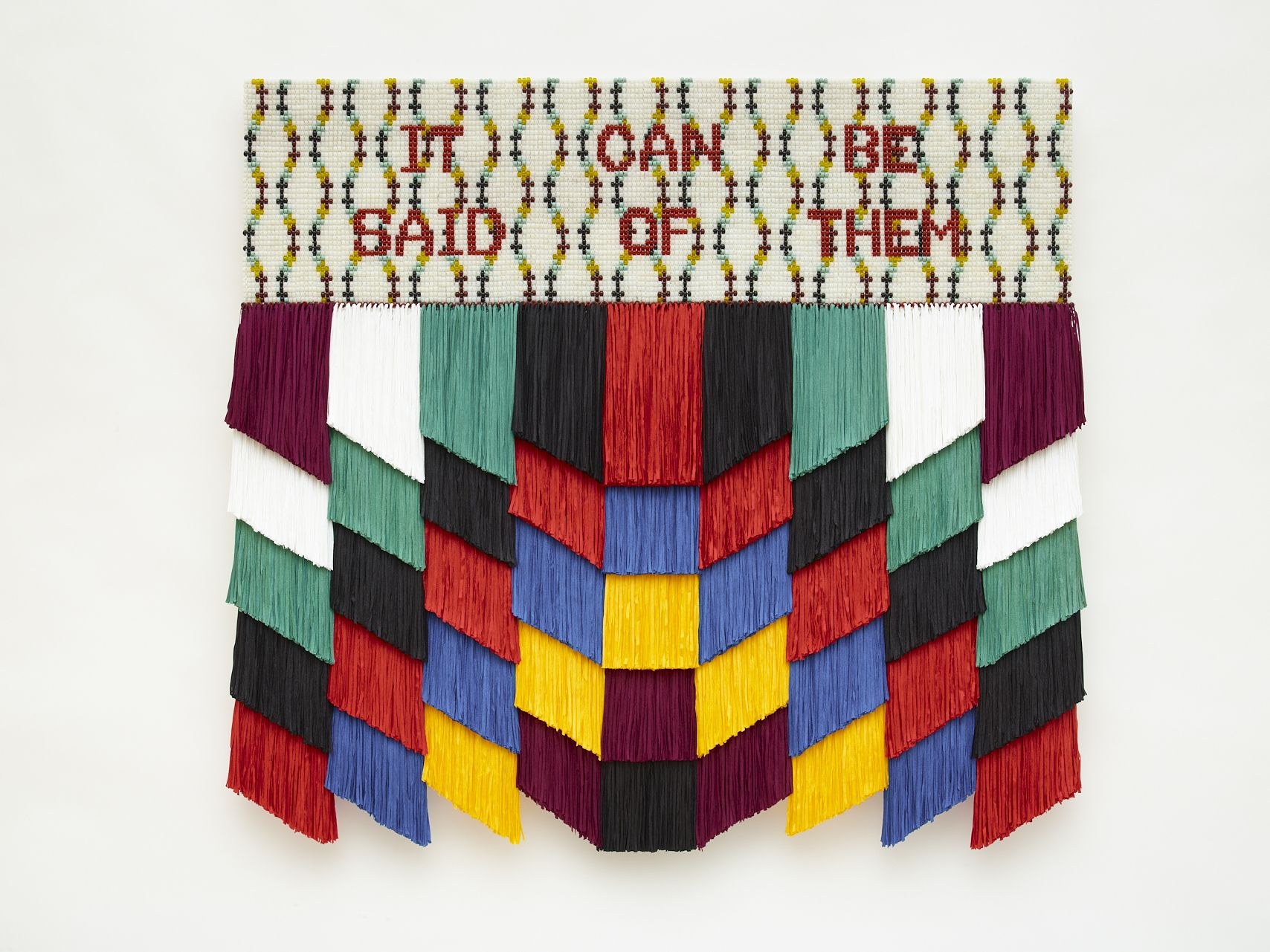 At Roberts Projects in Culver City, a solo show by Jeffrey Gibson delights in meticulously crafted details. Part Choctaw and part Cherokee, Gibson calls upon craft traditions, like Iroquois beadwork, and infuses them with homages to pop-culture, music, and activism. Across the exhibition, lyrics from Tracy Chapman, Björk, and the Beatles are referenced in Gibson’s titles like “THE LOVE YOU GIVE IS THE LOVE YOU GET,” a meticulously beaded punching page that includes the Beatles lyrics carefully stitched across its patterned surface. The work upends the function of a punching bag through the application of beads, transforming an aggressive act into a peaceful and healing message. Several works in the show display messages of self-empowerment (such as “I CAN BE SOMEBODY,”), while others celebrate a fluid and inclusive gender identity. The title work “IT CAN BE SAID OF THEM” is lifted from a Sister Corita Kent print that celebrates four male leaders — Jesus, Martin Luther King, Jr., John F. Kennedy and Robert Kennedy — who influenced the civil rights movement of the 1960s. In the poster, Kent’s text begins with “It can be said of him…” which Gibson poignantly upends, replacing the male pronoun with the more inclusive “them.” A wall-work that combines both beaded tapestry and painted surfaces reads “THEY CHOOSE THEIR FAMILY.” Gibson explains that “Many LGBTQI people have been rejected by their friends, family and society. We have found support, love and mentors within the LGBTQI communities that we have been a part of and have defined these people as our chosen families.” As such, across the show, Gibson calls upon past traditions to chart a path forward that celebrates the individual while honoring community, both given and chosen. 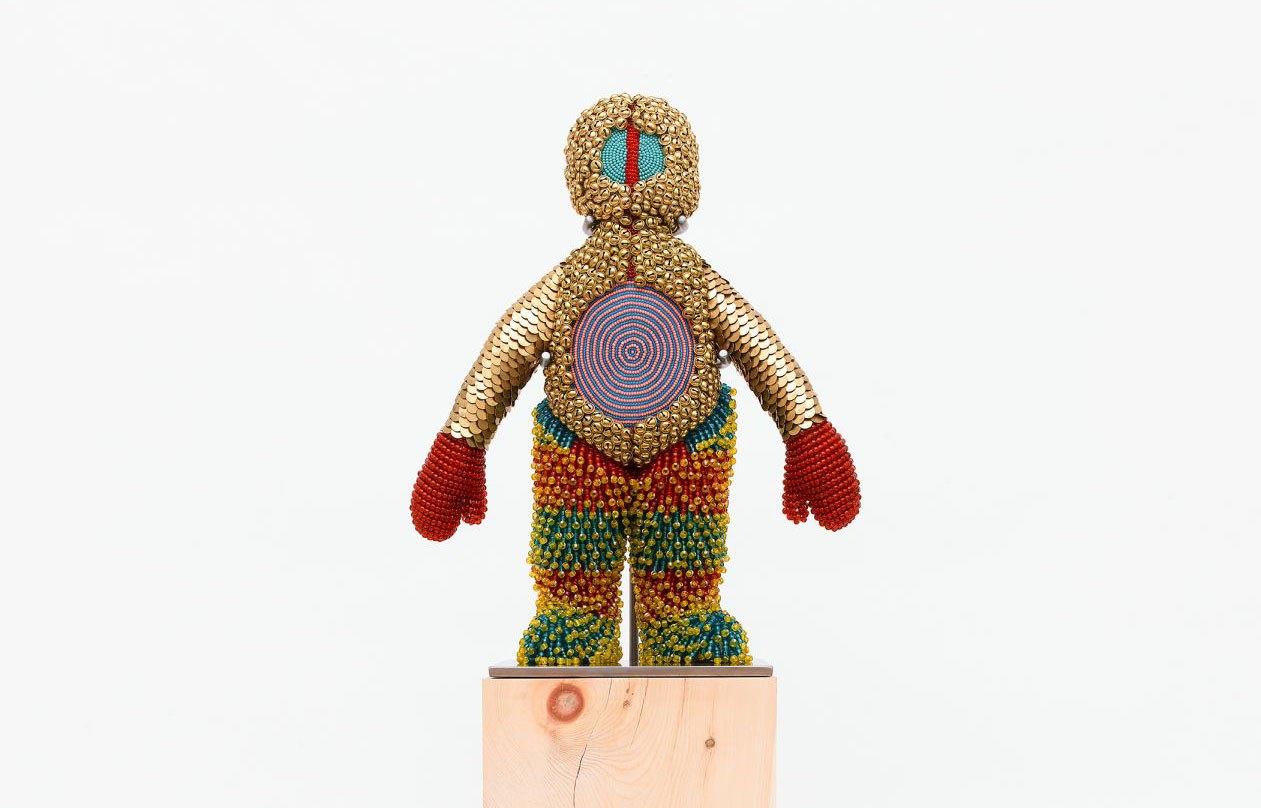 Several small figurative and beaded sculptures stand on pedestals in Gibson’s exhibition. Like elaborate oversized dolls, each one is covered in rows of beaded applique, each one unique. Here too, Gibson welcomes an array of influences, from Native American to Afro-futurist sources, denying any singularity of identity. In the gallery’s viewing room, Gibson explains, “The figures began as a way for me to create a space for myself, one that I did not see represented in dialogues about Native or Indigenous representation. The perceptions placed [onto] me by non-Native people were too narrow and never acknowledged my experiences as ‘Native’ enough. I refute this kind of pigeonholing by defining my own sense of aesthetics and use of materials that are a mashup of personal experiences and references that have occurred in my life.... I have always appreciated that this celebration of the individual countered the static public perception of Native people. I never fit that perception and found it frustrating to be considered ‘not Native enough.’ I moved on.” 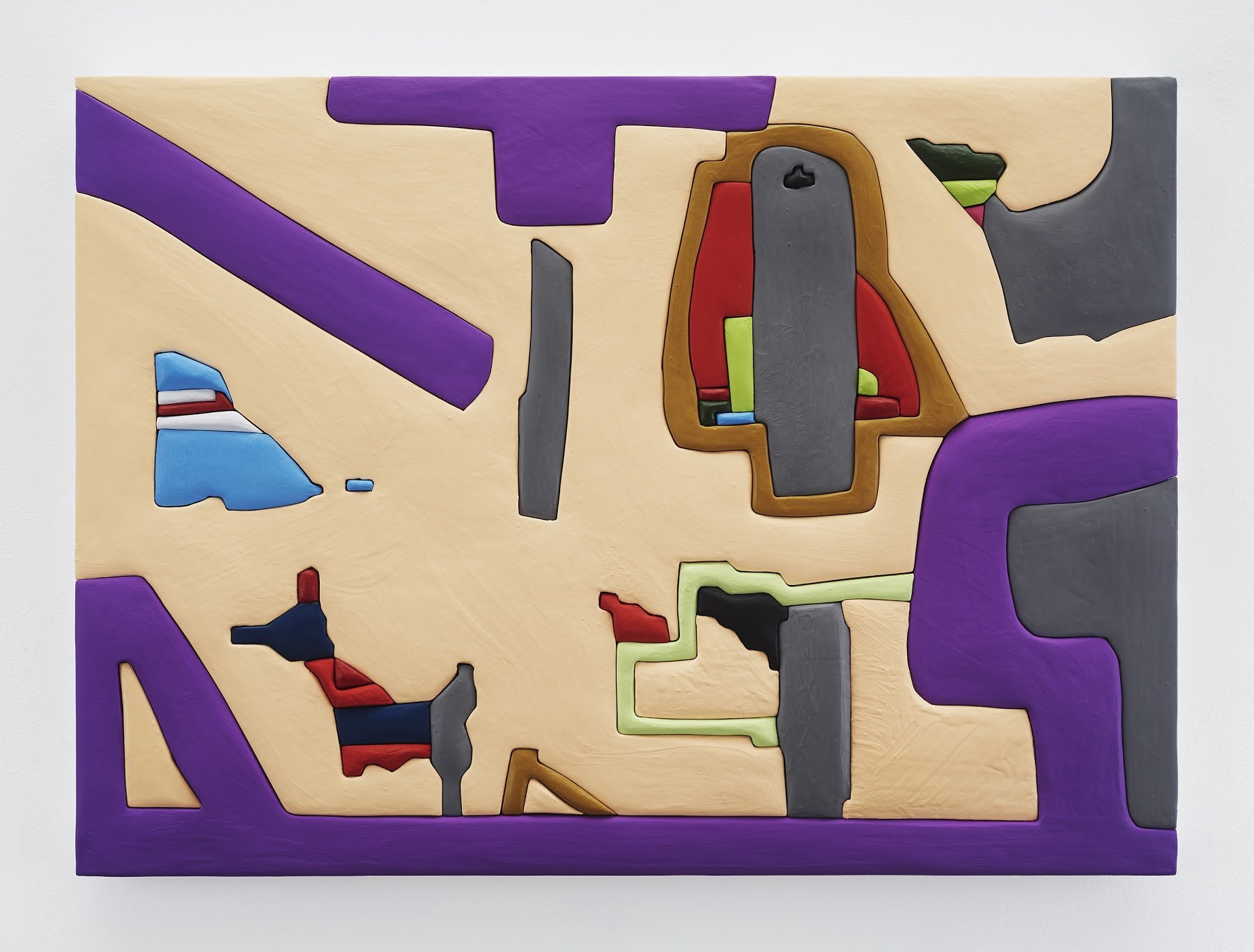 Sadie Benning’s paintings begin in a space that many have become all too familiar with this year: their iPhone. Each painting, some of which span up to six feet in the gallery, begins as an iPhone drawing within the limited conditions of pressing a finger to screen. The abstract doodles are then transferred to large sheets of plywood where the artist cuts each piece out before applying layers of aquaresin and paints, creating a pillow-like dimensional surface around each element. The pieces then fit together like a grand jigsaw puzzle. This transfer of digital to physical (and large scale physical at that) isn’t always seamless — small gaps peer through the embedded pieces — which may be Benning’s point. Most of the works were made in 2019, before any notion of the pandemic infiltrated our daily lives. Yet, looking at these large scale works that encompass one’s field of vision, the process of being deconstructed, ripped apart, and then stitched back together again feels familiar. The show, titled “This is Real” might provide a reminder that the “normal” we came from certainly won’t be the one we return to, and perhaps we will arrive on the other side of this more colorful and dimensional than we were before. 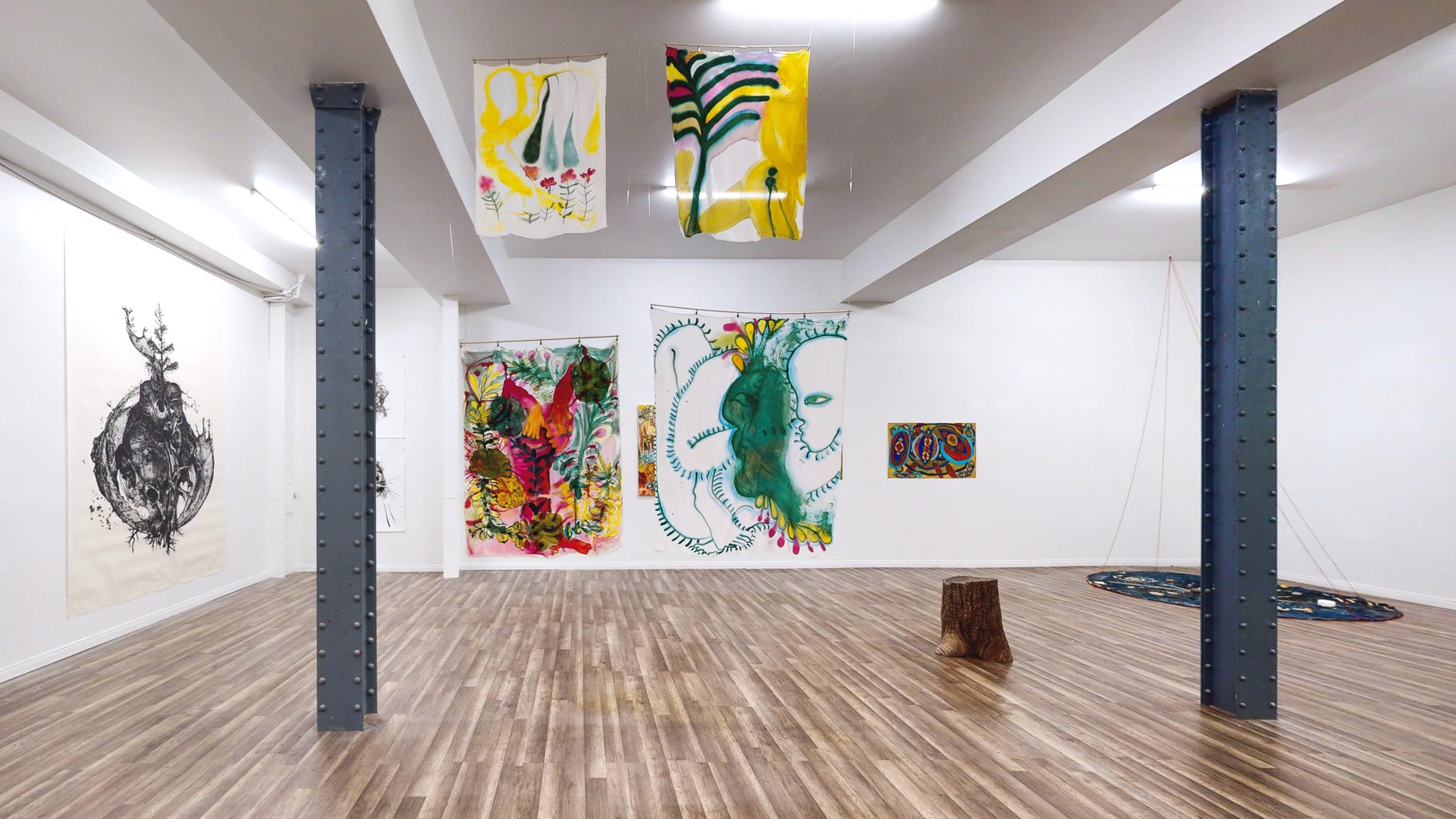 “Shape of Life” at Wönzimer

Amid the chaos of last week, a new group show opened downtown that is pulling back and asking big questions about existence. An essay written by the show’s curator, Gary Brewer, points to scientific discoveries that have expanded human consciousness throughout history. Brewer writes: “what we know is that we are a part of a vast network of interconnected relationships, whose ebb and flow profoundly change the nature of life.” As such, artists across the show pull in natural elements, and muse on the interconnectivity of life, and the limits of mortality. Jeff Colson’s cellular sculpture featured in the exhibition occasionally takes off at random, rolling around his property pushed by the whims of the wind; Mercedes Dorame, a Tongva artist, explores L.A.’s landscape and performs private rituals that call upon Tongva histories and rituals; Nasim Hantenzadeh depicts ambiguous organic forms that mingle together, as much bodily as they are plant-based or cellular. Cheyann Washington’s paintings on fabric utilize plant materials to create dense pigments whose colors will shift over time. Taken together, the show is a welcome perspective-check after a tumultuous political year — it’s grounding to imagine a world in which human activity is not at the center.