Two artists draw from their cultural backgrounds to respond to today’s social unrest and disparities. A group show shifts its focus to highlight isolation and race in America. An Instagram account is holding U.S. museums accountable for discrimination. 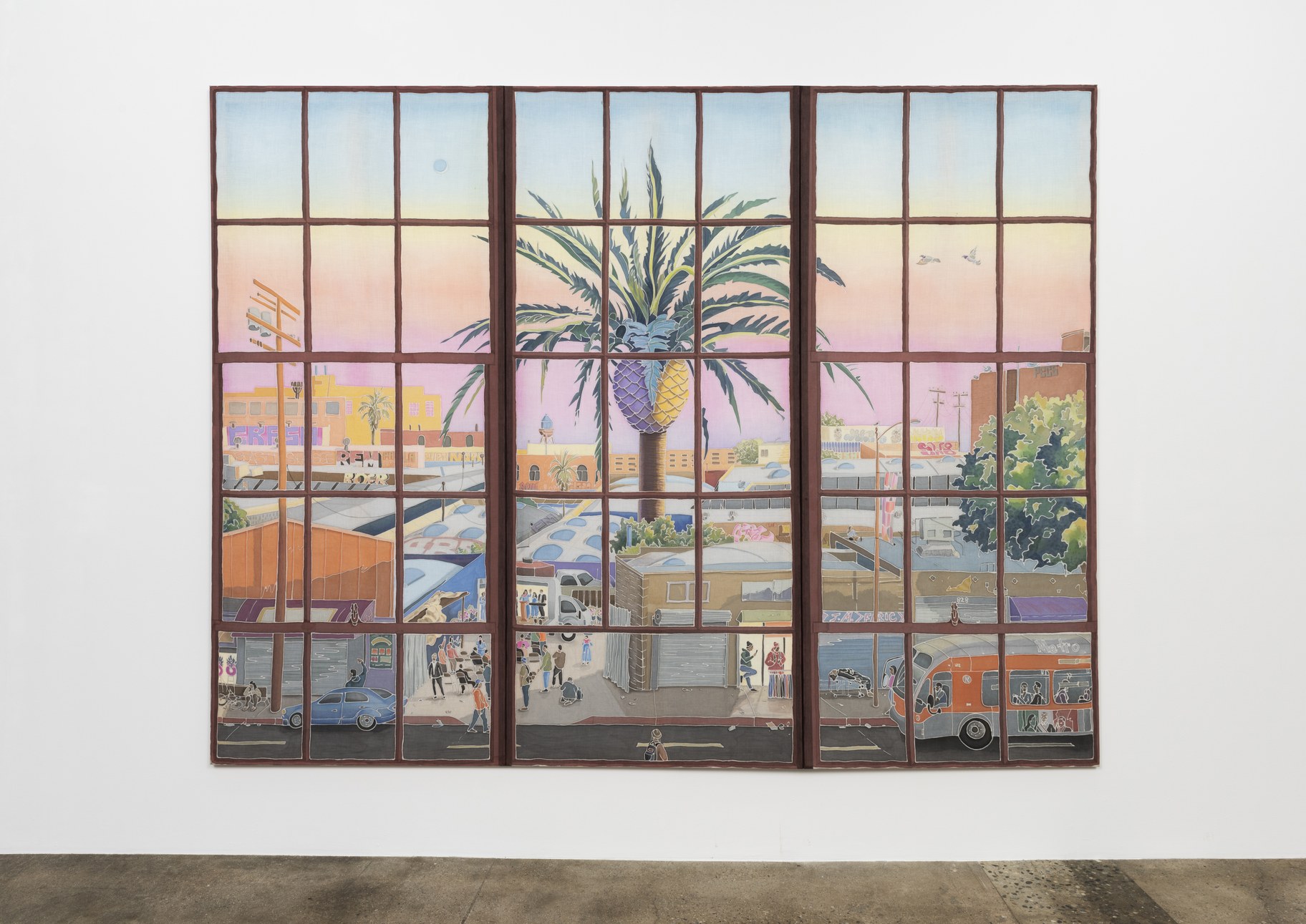 “Facing New Axes,” a two-person show at Hunter Shaw Fine Art, opened days before California’s shelter-in-place order was announced. The gallery has been able to keep the exhibition on view, and has recently reopened by appointment. The exhibition, which pairs work by Tammy Nguyen and Adam de Boer, feels almost prophetic in light of a global pandemic and social uprising. The press release describes the artists as “incorporating themes of diaspora and resilience.”

Both artists use traditional craft techniques from their respective cultural heritages. Nguyen uses the format of East Asian multi-panel paintings that depict the four seasons. Her seasons depict extreme weather events such as dust storms and brushfire. They speak to human adaptation and resilience amid an increasingly hostile climate.

De Boer uses Batik, a traditional Indonesian dye process. Before the fabric is dyed, artists draw lines in wax to create intricate patterns. De Boer uses this method to create a large-scale landscape looking out his studio window onto LA’s fashion district. He explained to me, “The paintings are deliberately ambivalent, depicting the whole range of sights and experiences I can see from my studio window near Skid Row.”

I asked de Boer if the events of the last month have added extra urgency to the themes in his work. He said, “I hope the dead-pan approach [of the paintings] allows viewers to see that the socioeconomic disparities and the sociopolitical unrest [are] part of a larger postcolonial fallout that we, as humans, haven't truly accepted and dealt with. Whether that's through an honest ignorance or something more sinister, the simple fact is that we need to admit and believe it before we can faithfully do anything about it. History is long and nuanced, and the answers to our problems are going to be equally complicated to imagine and employ.” 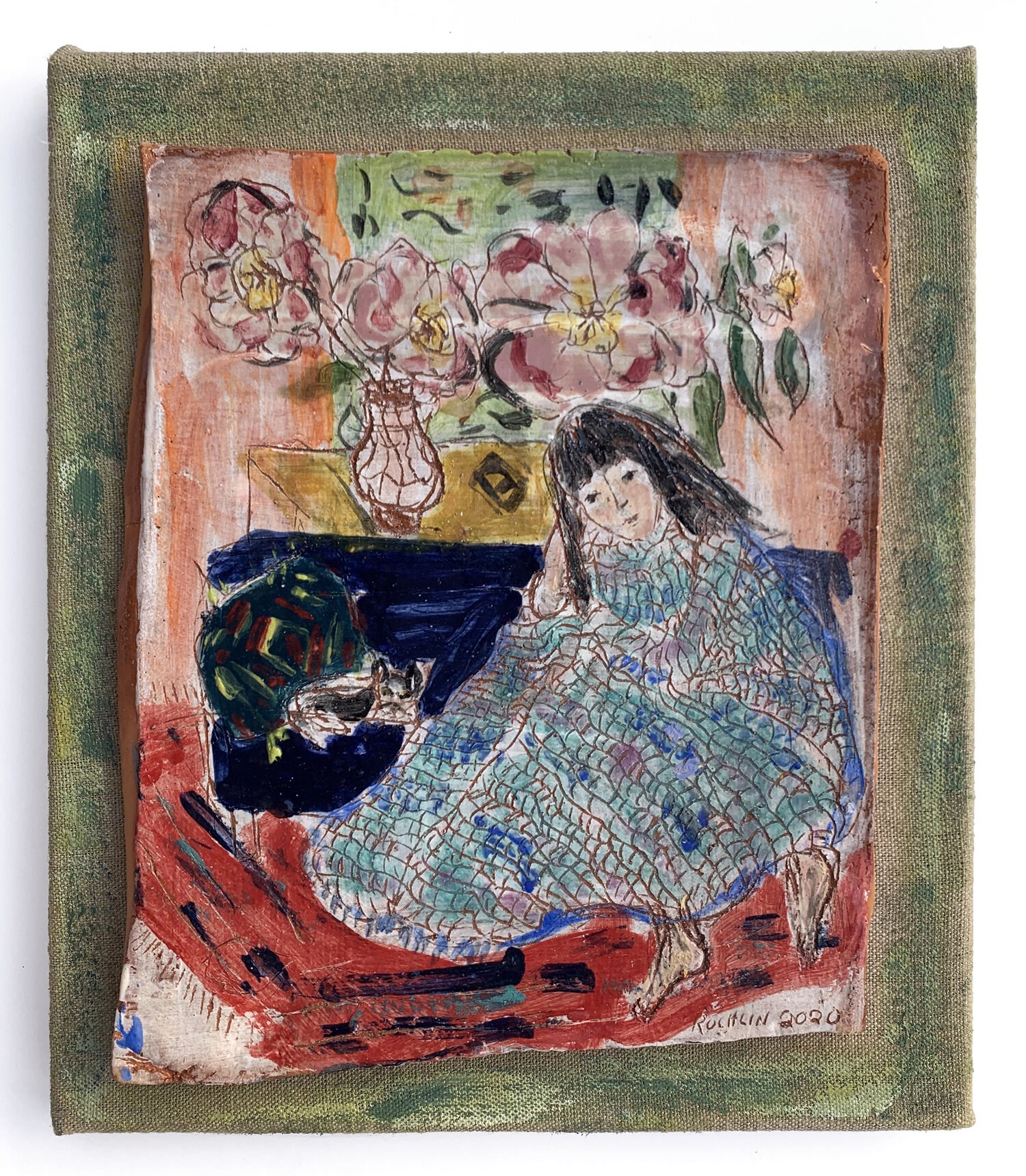 A new online exhibition hosted by La Loma Projects — a gallery that artist Kirk Nelson operates out of his home in Pasadena — features 40 artist portraits made during the pandemic.

Nelson explained to me that the focus of the exhibition shifted in the wake of George Floyd’s murder. “Originally, I planned a group show called ‘Inside Voices.’ The prompt was simply: Create a portrait while in lockdown. Such a show would, I imagine, reflect themes that seemed to bind us all in the early phase of the pandemic,” Nelson told me over email.

Nelson explained his decision to change the title and prompt for the exhibition: “A show about interiority, solitude, boredom, quiet, and malaise did not feel fully representative of a moment demanding urgent social action.” He renamed the exhibition to “So Far,” a play on words to describe self-isolation and dual experiences that people in the U.S. have based on their skin color.

Nelson asked the artists to “create a portrait responding to any aspect of this historical moment: either one of our confinement in quarantine, or one of this growing insurgency against our brutal systems.” The featured artworks present a range of emotion, yet across portraits of artists gazing into their bathroom mirrors, or curled up in a stairwell, solitude is a primary theme.

#changethemuseum — @changethemuseum Pressuring US museums to move beyond lip service proclamations by amplifying tales of unchecked racism. Share your story: link in bio.

Less than a month ago, the Instagram account @changethemuseum started posting anonymous accounts of racial discrimination within U.S. museums. The first post described the title of a blog article being changed by a white curator because the title sounded “too black power.” It was accompanied by an open call to submit stories of unchecked racism, which the account reposts. @changethemuseum has now shared 165 stories and has 15.3K followers.

The founder  — a New York City museum worker whose identity remains anonymous — talked to Hyperallergic last week about the urgent need to start the account. “Through many conversations with colleagues across the U.S., it became apparent that museum administrations were not truly reflecting on their own roles in shaping toxic, racist working cultures and public spaces — there seemed to be a refusal to accept complicity, and, more telling, a palpable lack of urgency to develop strategies, goals, and timelines for combating instances of racism, severe inequity, and colonialism inherent in the collecting/art history narrative.”

Many of the anonymous stories are told by BIPOC (Black, Indigenous, and people of color) employees about white bosses, curators, board members, and presidents. One department head called someone “spicy” after learning about their ethnicity. One white boss told a woman she looked like a “beautiful Latina” and proceeded to touch her curly hair while saying random Spanish words.

The posts highlight human resources departments doing nothing when these aggressions are reported, and wage disparities between BIPOC employees versus their white male counterparts.

Other posts reveal the museums publicly supporting diversity while disregarding the issue internally. The @changethemuseum founder told Hyperallergic that generally these stories reveal that HR departments “protect the institutions they serve” rather than individuals, and that museum boards are the “true rulers of our institutions.”