Dominique Fung’s paintings unpack her understanding of her own cultural identity. Paul Sepuya’s photographs bring emotions to disembodied digital communication. A group show looks at human longing through the lens of the pandemic and police brutality. 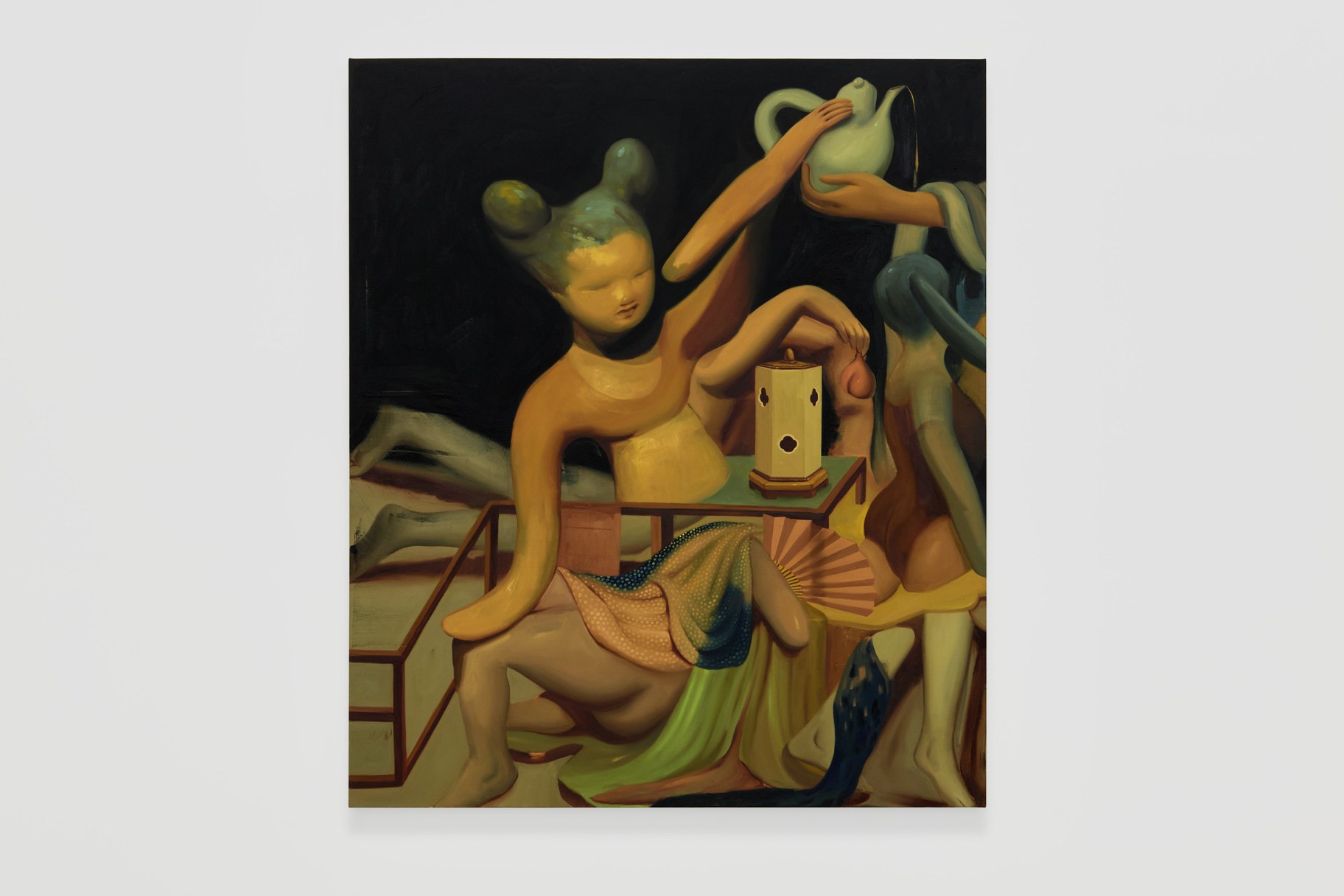 Dominique Fung, “A Bridge to the Ancestral Plane” (2020). Oil on canvas, 84 x 72 inches. Image courtesy of the artist and Nicodim Gallery. Photo by Lee Tyler Thompson.

Dominique Fung’s exhibition at Nicodim was a particular joy after long weeks of viewing art digitally. Her paintings are an uncanny blend of figuration, abstraction, and surrealist objects that merge together in harmonious locomotion across the canvas.

Disembodied limbs — animal and human — merge with teapots that are decorated with traditional Chinese embellishments. Her dense compositions create scenes that feel dream-like in their storytelling. They are rooted in reality, but acted out in a subconscious hallucination.

Fung was raised in Ottawa, Canada, to first-generation parents from Shanghai and Hong Kong. Her childhood was a blend of cultural impressions, speaking Cantonese at home and English at school. The gallery’s press release describes that “her early artistic passions were informed by Vermeer, Manet, Rembrandt, and Goya, but her sense of Chinese heritage was largely informed by vessels and objects she saw at home and on display in the Asian art section during visits to the Met in New York.”

After viewing the Asian art section at the Met, Fung realized that her own understanding of Chinese heritage was built through a Western, lens too.

Here Fung’s paintings delve deep into her psyche, unpacking her own understanding and associations with Chinese cultural artifacts. Earlier this year, Fung told “Juxtapoz” that the “artifacts, vessels and sculptures are animate protagonists in my paintings, whereas historically, these objects have been seen as cultural tropes." 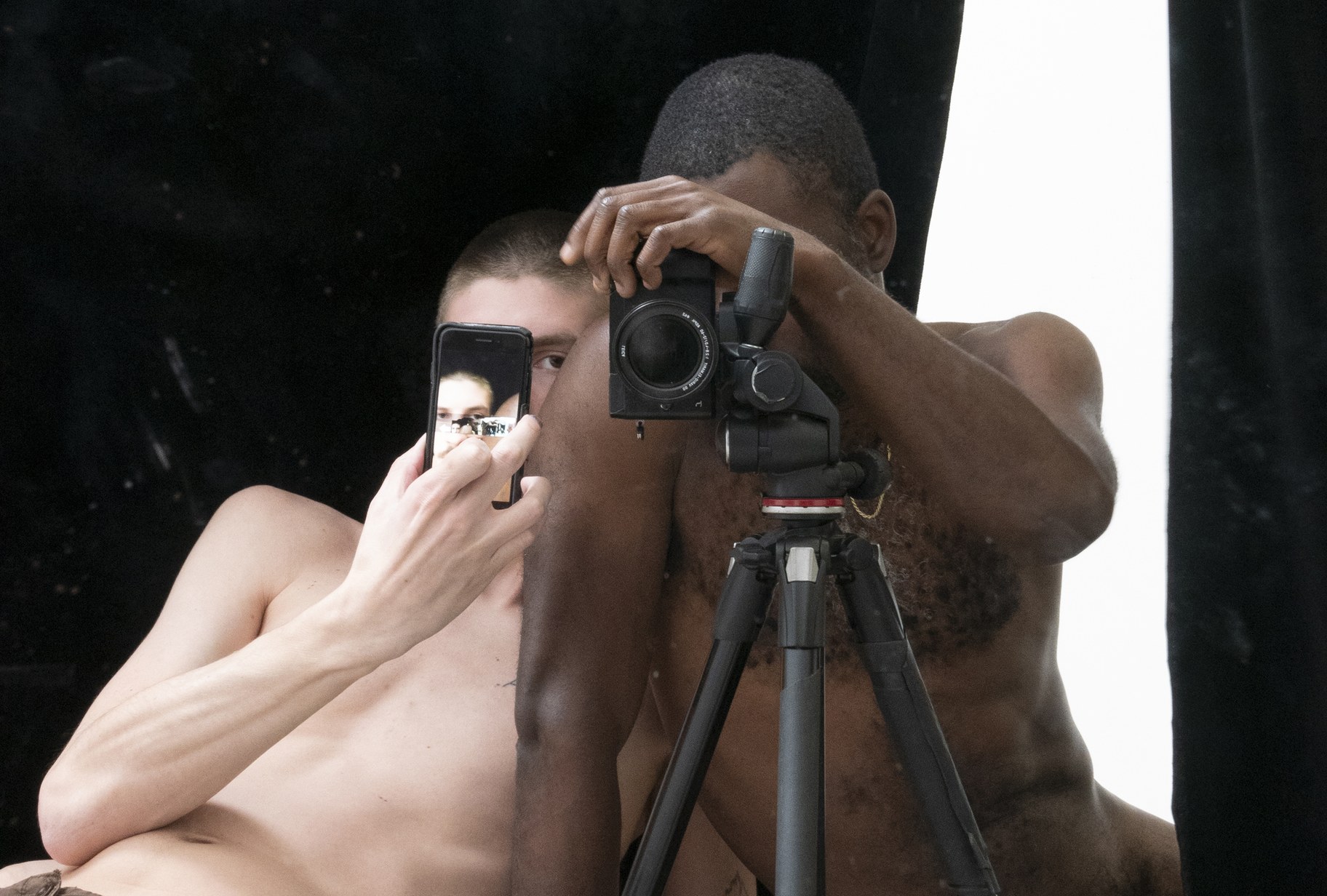 Paul Sepuya’s solo exhibition at Vielmetter, “a conversation about around pictures,” opened on March 14 alongside the gallery shutdowns. It’s been extended through July 18.

Sepuya’s work centers around portraits that are taken in his studio, and are made by pointing a camera directly at a mirror. The portraits include his own body and often another, posed in delicate yet casual interactions. The photos also include the camera that is used.

In this current show, we also come across other lenses in the frame. Sepuya’s collaborators often hold iPhones that take photographs alongside the ones that he is painstakingly staging. When viewing this show in person, these iPhones add context to the scene, often picturing surroundings beyond what is captured in Sepuya’s framing.

As I was walking through Sepuya’s stunning show, I was struck with my own body in relation to those being pictured. As I held up my phone to take a photo of the work, I became reflected in the glass and began to mirror the screens and cameras pointing back at me from Sepuya’s prints. The hazy space of Sepuya’s studio, reflected in the smudgy mirror he photographs with, became doubled by my own space within the gallery, reflecting back at the subjects represented.

The experience of viewing Sepuya’s work seemed to parallel the shared isolation of COVID. It’s a shared experience reflected together from different sides of the glass.

“It’s a sad and beautiful world…” at Wilding Cran Gallery 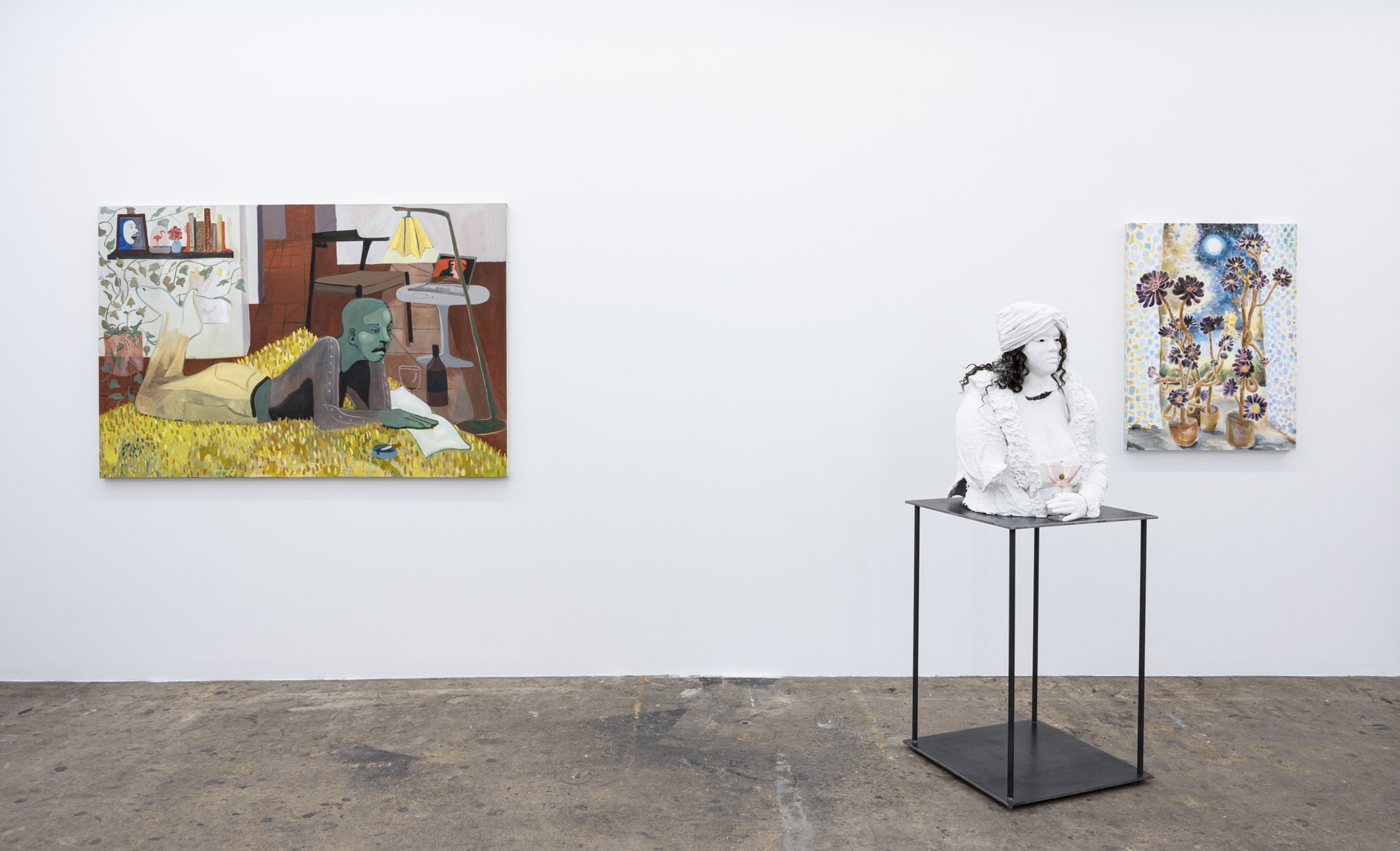 To title a group exhibition “It’s a sad and beautiful world…” is to set up a distinct tonal resonance. Particularly in lieu of a press release, those six words provide the only context.

Many of the works seem to deal with the pandemic’s ensuing social isolation and the longing for connection. A glum figure in Katja Farin’s “Ominous Music” (which was painted during quarantine) lays on a plush rug reading a book, empty wine glass perched nearby. A laptop in the background pictures a film still in which the caption [Ominous Music] is written underneath a mummy-like silhouette.

For other artists in the show, the longing for connection strikes a deeper chord. February James’ “On My Way Home” is a direct response to the murder of Gorge Floyd at the hands of police. The painting pictures a Black mother and son staring forward as if waiting. Text that is scrawled on the left half of the painting reads: son father husband BLACKMAN.  (George Floyd was all of these things, yet in the last minutes of his life, he was reduced to only the latter.)

Karon Davis’ “The Mother, The Son and The Holy Spirit” was given its own section of the gallery. It features two of Davis’ signature plaster cast torsos that are eerily embedded with glass eyes.

One figure, a woman, rests boldly and calmly on a pedestal. She is adorned with a cowrie crown, holds a gold-leafed egg, and sits on a bed of hemp straw. In contrast, the expression on the face of the male torso adhered to a gold-leaf circle on the wall behind the woman is one of fright. He appears mounted, like a hunted animal. Yet he’s also exalted, with the gold leaf behind him forming a circular halo.

Powerfully, the figure seems to symbolize all the lives that have fallen at the hands of police violence. Yet the strength of the female figure, goddess-like in her power, calls us to keep pushing toward liberation, as we remember and dignify those we have lost. 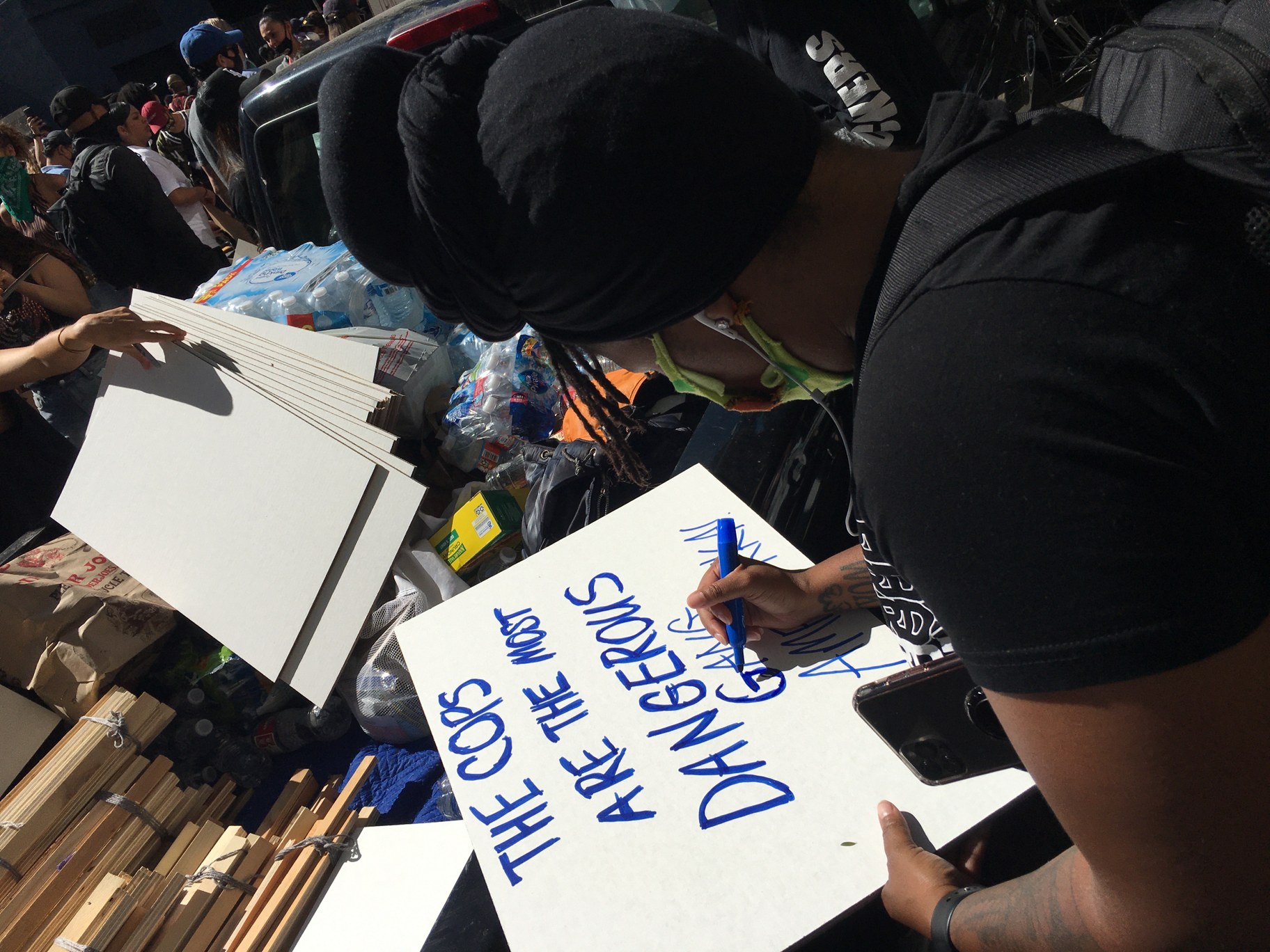 A participant makes a sign at Sunday’s protest. Image courtesy of Greg Ito.

Protest signs are at the forefront of LA’s protests against the killing of George Floyd, Breonna Taylor, and other Black people at the hands of police. In an effort to support protesters, LA artist Greg Ito has put down his paintbrush and is putting together sign-making stations. Ito sets up shop at protests around LA, and he supplies demonstrators with signs, snacks and water.

Last week, I talked to Greater LA’s Steve Chiotakis about Ito’s organizing, what inspired him to get physically involved, and why signs are so important to communicating protestor’s messages.