Sculptures use mass-produced objects to allude to an individual’s psychological makeup. Drawings of neoclassical architectures blend fantasy and reality. Sculptural objects have an imposing imperial undertone. 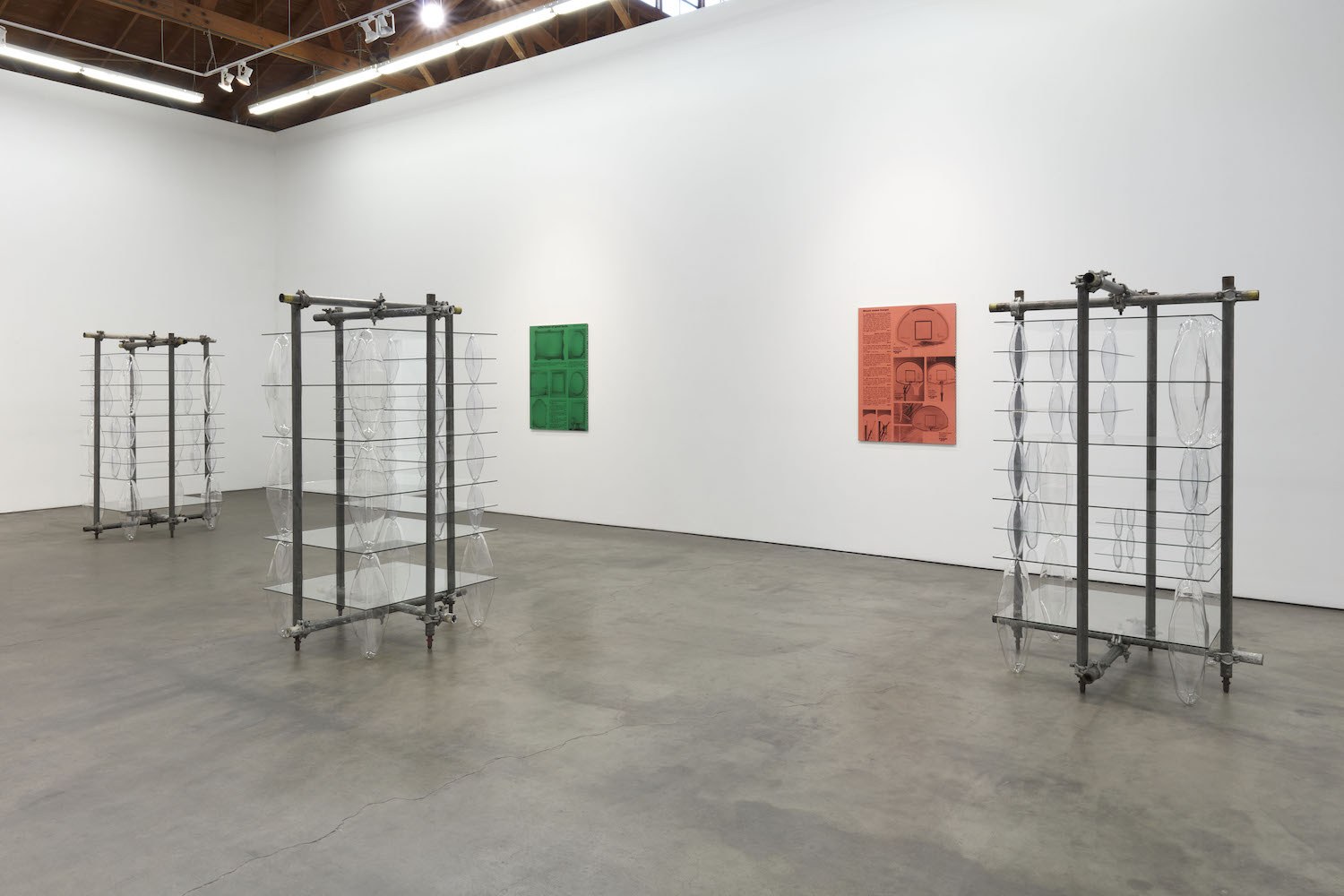 At François Ghebaly, Patrick Jackson’s solo exhibition, “My Dark Architect,” has a subtleness that builds across the show into a strange effect. In the first gallery, small display shelves are made by balancing glass sheets between plexiglass spacers. On each sculpture, a different store-bought item is featured: oversized foam dice, plastic skulls, silk house plants, and metal sifters.

As I rounded the corner to the second gallery, still attempting to make meaning out of those four objects transposed together, a new set of display shelves stood waiting in the next room, this time devoid of any objects. Instead, the shelves themselves and the plexiglass spacers are bound by metal scaffolding. Absent any defining objects, the display structures feel skeletal and almost bodily — their cast reflections creating optical tricks that mimic the inner workings of one’s own mind.

Surrounding these works are screen-printed pieces on colorful grounds, each featuring a different page from the last ever printed Sears catalogue (1993): ladders, mirrors, hobby knives, basketball hoops, pots and pans.

Throughout Jackson’s show, objects oscillate between mass-produced/ impersonal to highly specific stand-ins for personhood, pointing to the fact that objects, just like our daily realities, are open-ended and responsive to multiple interpretations. 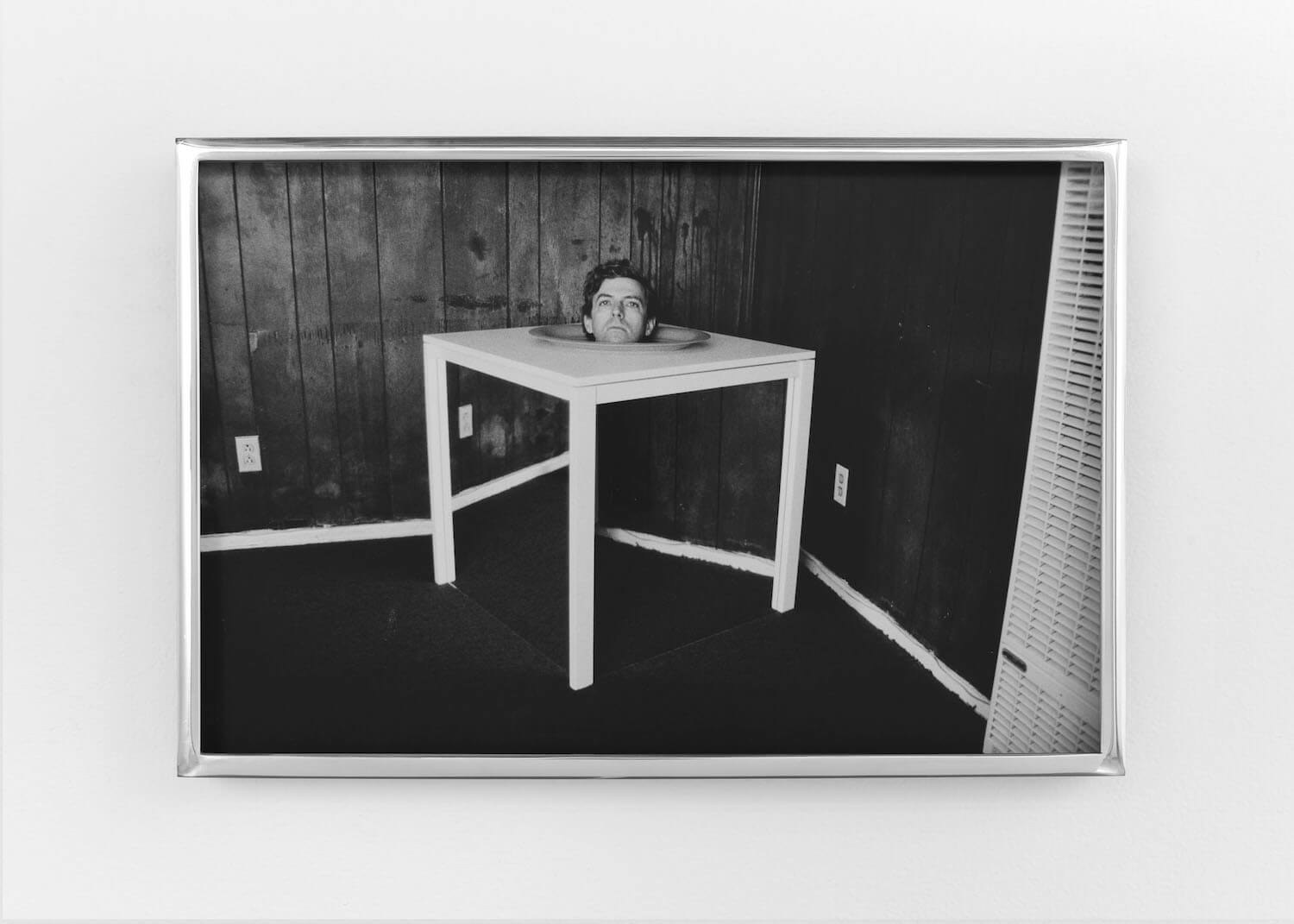 In the first room of Patrick Jackson’s exhibition, his sculptures are accompanied by small black and white photographs. Many depict public sculptures in Los Angeles, notably shot without people present. These are paired with a handful of images shot in Jackson’s own bedroom — complete with wood veneer walls and dull grey carpet. In contrast to the public sculptures, these interiors feel strangely vulnerable — a pile of linens awkwardly bundled on top of a wooden dresser somehow feels both abject and deeply personal.

In one of these interior images, Jackson has rigged a simple apparatus to create the illusion of his disembodied head sitting on a table. By adding mirrors to the base of a table, the artist creates a box that hides his body, which undoubtedly resides behind the mirrored walls.

The mirrors here are an important element. They allow the illusion to occur, while also giving away its trick as they reflect the room’s baseboards at strange oblique angles, disrupting the fantasy.

I reached out to Jackson to get his take on this image, which I told him felt like the lynchpin of the exhibition. “I think this image is definitely a lynchpin for the photographs in the show,” Jackson replied.  “I had an idea for this photo years ago and had sketched it out in my notebook, kept wanting to do it, and finally set up the shot. It’s one of those ideas that felt right and I kept returning to, never fully understanding why. I still don’t fully understand the image, but I’ve come to see it as myself as an object, an idea.” 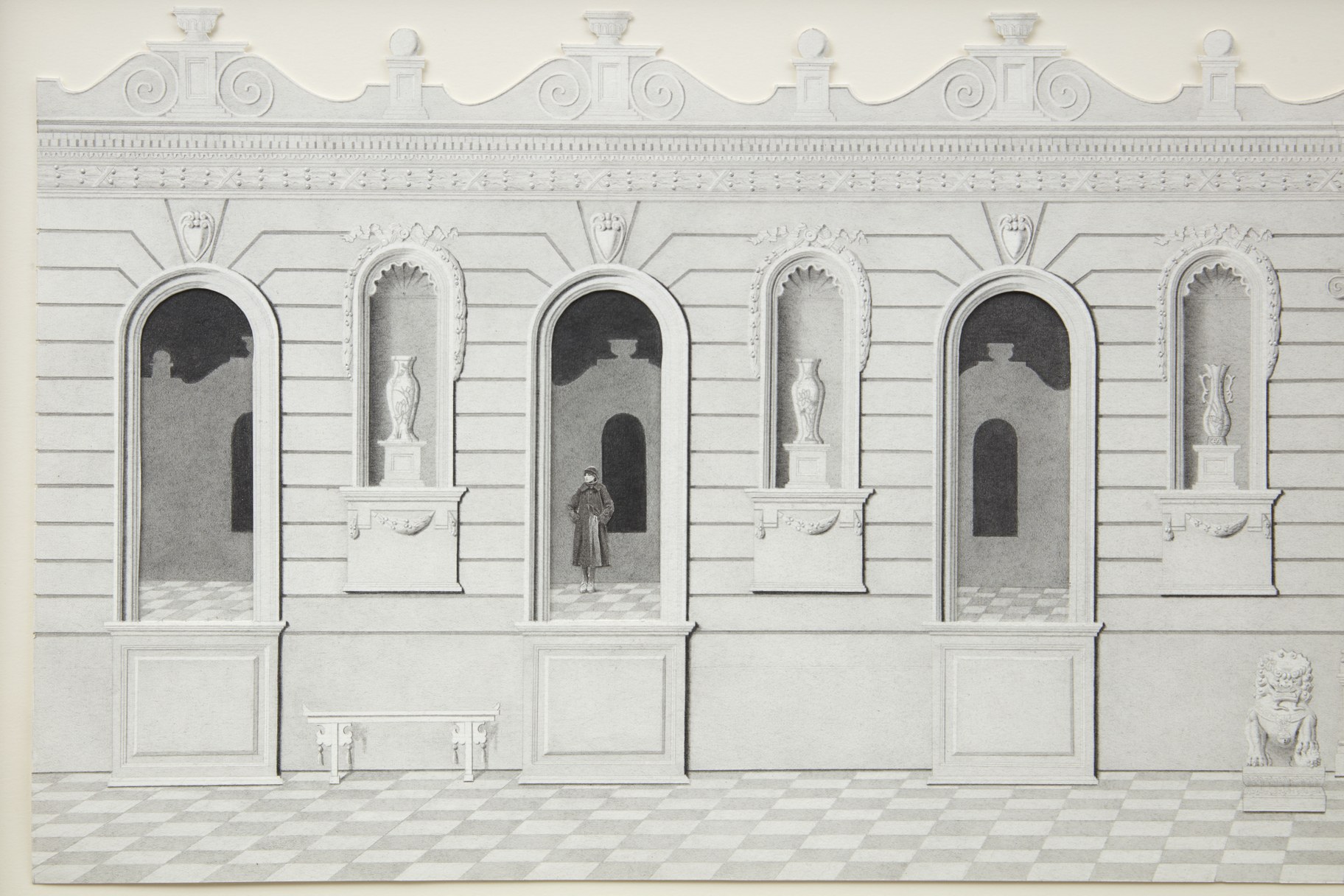 At Bel Ami in Chinatown, Milano Chow’s drawings are detailed architectural compositions delicately rendered in graphite. The artist pulls references from a hodge-podge of architectural sources, and at first, her facades feel faithfully reproduced with precision. Though meticulously drawn, it’s only upon a closer inspection that impossible details begin to emerge: doors are as big as windows, stairs feel strangely small, windows begin where a new story of the building should.

Chow distorts these details to highlight the window frame, always repeated across her drawings, and wherein she occasionally places women who peer out from behind half-drawn curtains. While the rest of the work is hand-drawn, these women, culled from fashion magazine photoshoots, are rendered via photo transfer onto paper, allowing for another uncanny disruption of believability.

The idea of the voyeur is often discussed with a creepy undertone — an unwanted onlooker. Yet through Chow’s use of models, who have specifically posed in order to be seen, she confuses the role of the onlooker.

I’ve known of Chow’s work for years, but in pandemic times, as we are all more confined to our discrete interiors,  the act of looking through her windows takes on a new resonance. Windows have become our means of connection during otherwise isolating times. My office desk, for instance, is placed at my front window, where a repeated cast of neighbors stroll by every morning. Some know to look for me, perched in my predictable seat, waving as they cruise past. In Chow’s drawings, this palpable desire for connection is felt, as her impossible architectures act as imposing barriers. 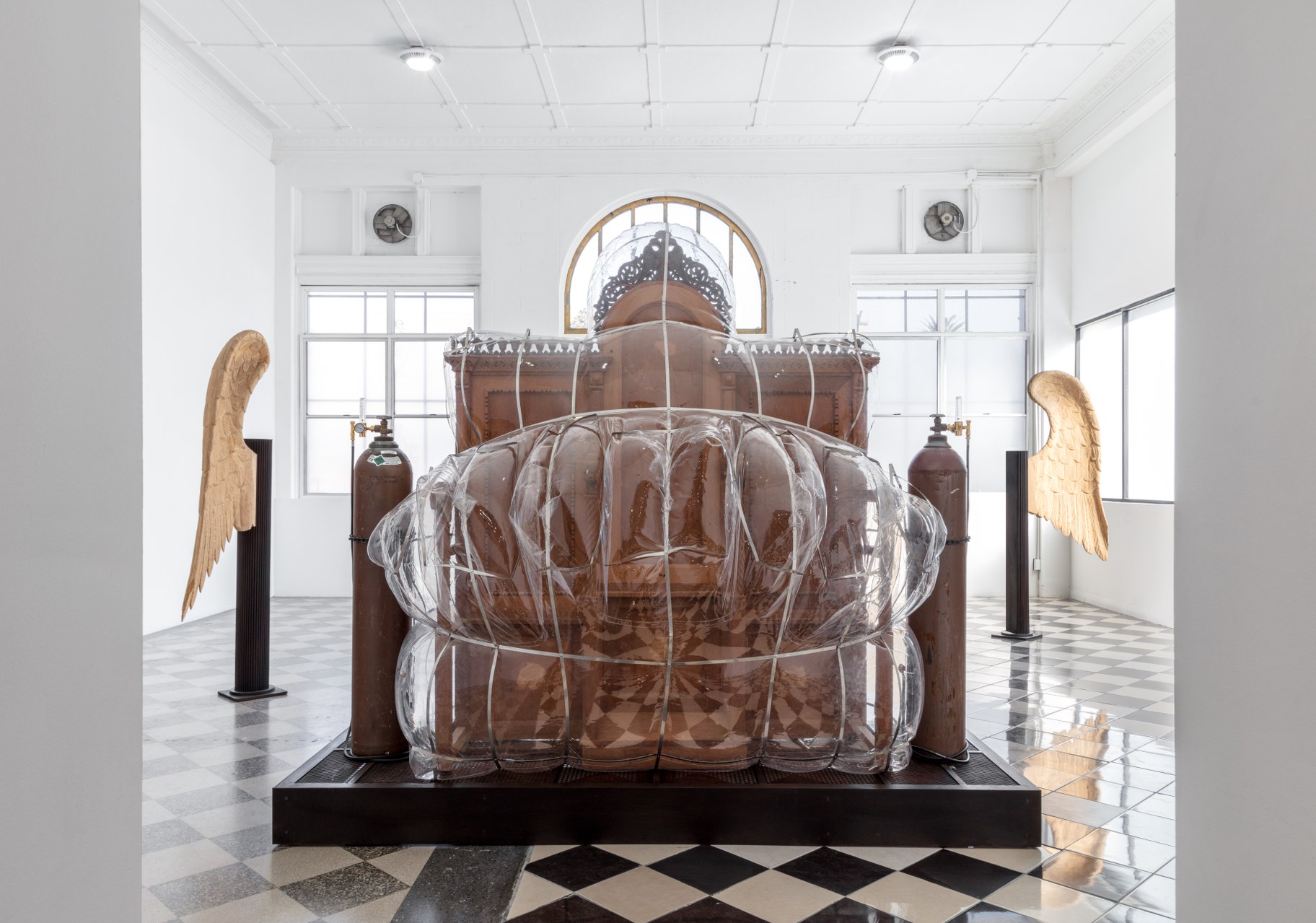 At Kristina Kite in Mid-City, Sean Townley’s exhibition, “Bad News from the Colonies,” which is co-presented by Night Gallery, feels like a strange dream in which found objects merge with political ones to create imposing imperial talismans.

In the main gallery, a set of found objects anchor the room, each one transformed into a new arrangement via sculptural intervention. The found wooden objects feel Byzantine or regal in nature — a carved coffee table, two large wings, and a throne with three seats. The throne has been wrapped in a plastic sheath, held in place by a metal armature.

In the gallery, argon gas is being pumped into this plastic bubble. It’s apparently a preservation technique used on historic wooden objects to kill mold and insects.

I visited this show last Friday, before election results came in — my own political mental haze surely affected my viewing of these works.

This imposing gas chamber, titled “Gassing the Imperial Throne,” acts to protect the throne itself over all else, while also violently and antiseptically closing it off to outside influence, democratic or otherwise.

“JUDGE JUDGE JUDGE,” in the next room, is a recreation of a Supreme Court justice’s robe, upsized slightly. The robe lays fallen on a wooden plinth, covered in a thick resin so that it is frozen in this fallen form. Although made in 2019, on the heels of Ruth Bader Ginsburg’s death, this work takes on new resonance.

As with all art viewing, context, world events, and one’s own reality intermingle with the artwork on view. Looking at these works as our democratic process was being contested by President Trump felt like a surreal reflection of the political conditions we’ve been living under for the last four years. I wonder how they might have felt different just a day later once the election results had come in.