Art Insider: As COVID spreads through jails, a dancer enacts choreography by inmates

Over the past month, artists have been enacting community-driven projects at the Institute of Contemporary Art, Los Angeles (ICA LA) as part of “Field Workshops.” The ICA LA writes that this initiative “responds to the latest cultural, civic, and social activities taking place in Los Angeles and the world at large.”

As part of the Field Workshops, this week, dancer Suchi Branfman is enacting choreographed pieces by inmates at the Correctional Rehabilitation Center (CRC) prison — a medium-security prison in Norco, CA.

Over the past five years, Branfman has worked with CRC residents on a project called “Dancing Through Prison Walls.” Before the pandemic,  Branfman and inmates co-choreographed and rehearsed dances once a week. They were engaging in an experimental, uplifting, and physical form of collaboration. Then COVID-19 hit and the program shut down.

As COVID-19 continues to spread through jails and prisons, Branfman’s work feels particularly urgent. “Despite the fact that the authors of these dances are still confined in extremely perilous …  conditions, we are honored that they have sent these dances out to us,” Branfman told me. “We carry them within us as we embody their visionary words, and while we work towards getting them, and so many others, out."

This week, the public can watch rehearsals through ICA LA’s windows. RSVP, face masks, and social distancing are required. The dancers will perform the final works and speak about their collaborations this Saturday via Zoom.

Kenny Scharf has been slowly building up a spray-painted cast of characters to prepare for his latest show at Jeffrey Deitch Gallery, “MOODZ.” Every day over the last several months, Scharf has painted a few more of his signature faces directly on the gallery walls. Now 250 of Sharf’s characters line the sprawling gallery space, each one a unique expression of the artist’s personality.  They undoubtedly express the panoply of emotions that the recent months have elicited.

With the absence of anything on the floor of the gallery, the massive space is engulfed by the painted characters, which swell into a strange clownish army. Some are goofy and jovial, others appear angry or distressed, while others dissolve into an almost abstract swirl of line and pattern. Taken as a whole, the troop is menacing, playful, and elicits an undeniable visual energy.

Scharf’s work pops up in public spaces across the city. His characters appear on the side of muffler shops or on cars zipping down the 10 freeway. In the artist’s ongoing “Karbombz!” project, Scharf paints impromptu characters directly onto people’s cars.

Aubrey Longley-Cook at The Lodge 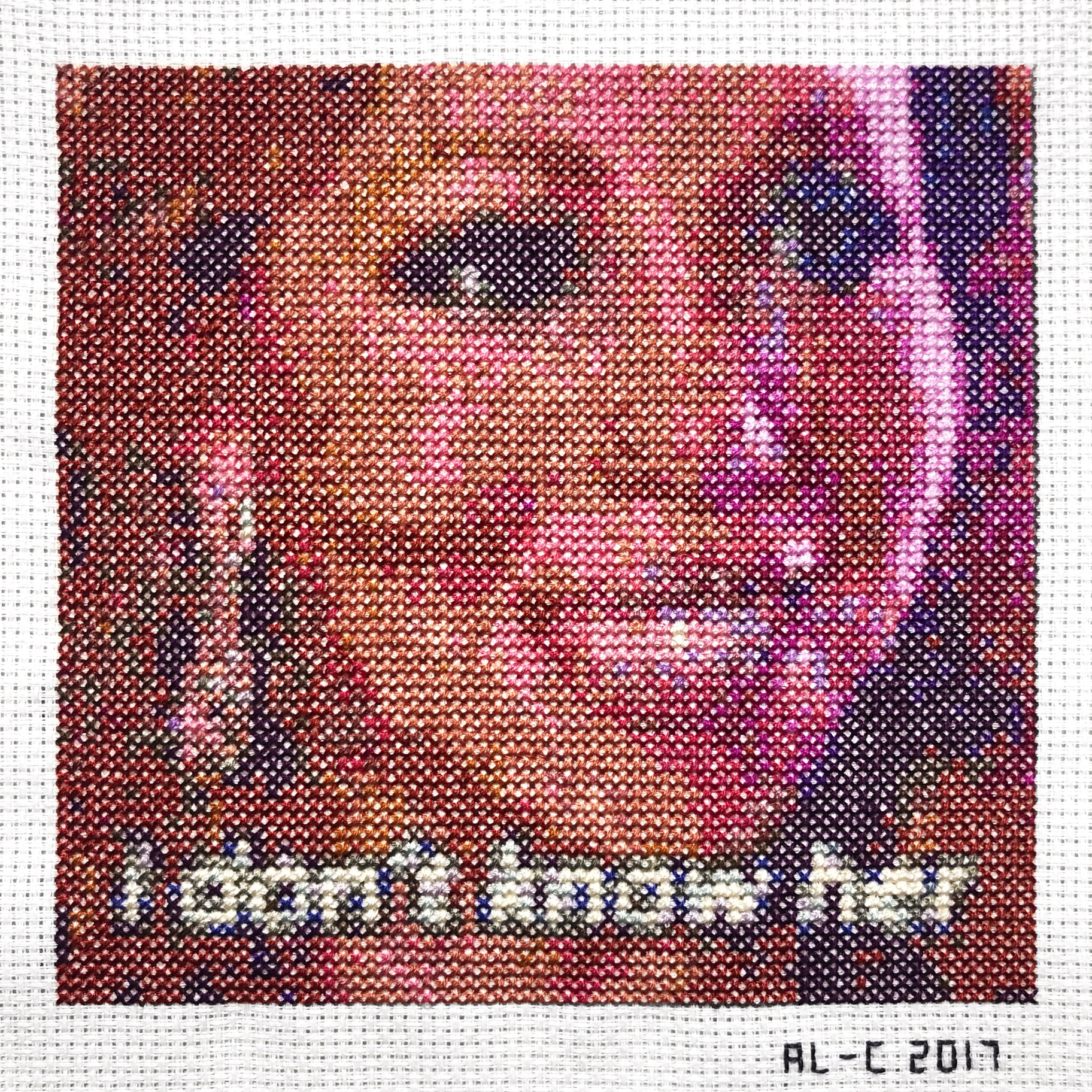 Aubrey Longley-Cook creates intimate embroidery based on images culled from pop culture and Southern California lore. They include buff Baywatch-esque men emerging out of the Pacific Ocean, palm trees flanked by a pure blue backdrop, and a still from the Hollywood classic “Chinatown.”

One work, “I don’t know her,” pictures Mariah Carey with the titular subtitles below (the response the singer famously gave when a reporter asked her about Jennifer Lopez). Painstakingly stitched with embroidery thread, Longley-Cook translates this meme-worthy moment into a traditional handicraft. The pixelated images culled from low-res screen grabs translate quite well to the cross-hatching of embroidery, which further complicates this conflation.

A set of embroideries of a golden retriever running have been made into a video animation, “Runaway,” which plays in the gallery on a perpetual loop. It’s like Muybridge’s horse or Sturtevandt’s dog — perpetuating a feeling of endless movement that evokes the onslaught of 2020.