Los Angeles’ Chinatown has always relied on tourism. Some restaurants have reopened after the quarantine, but will they ever recover?
Photo by Kwasi Boyd-Bouldin for KCRW.

In late May, Los Angeles County announced new rules allowing restaurants to reopen their dining rooms, almost three months after ordering them to shut down. Before that, restaurants only offered takeout and delivery in order to prevent the spread of COVID-19.

Yet relatively few restaurants in Chinatown and the San Gabriel Valley have started offering dine-in again.

During the first week of June, many were preoccupied with closing early to avoid a curfew that local leaders imposed to quell demonstrations protesting the deaths of George Floyd, Breonna Taylor and others at the hands of the police. Restaurants were also juggling various questions when considering reopening: How do they preserve the intimacy that makes restaurant dining so special, while ensuring customer and staff safety? And with so many people still getting sick, will customers come back? 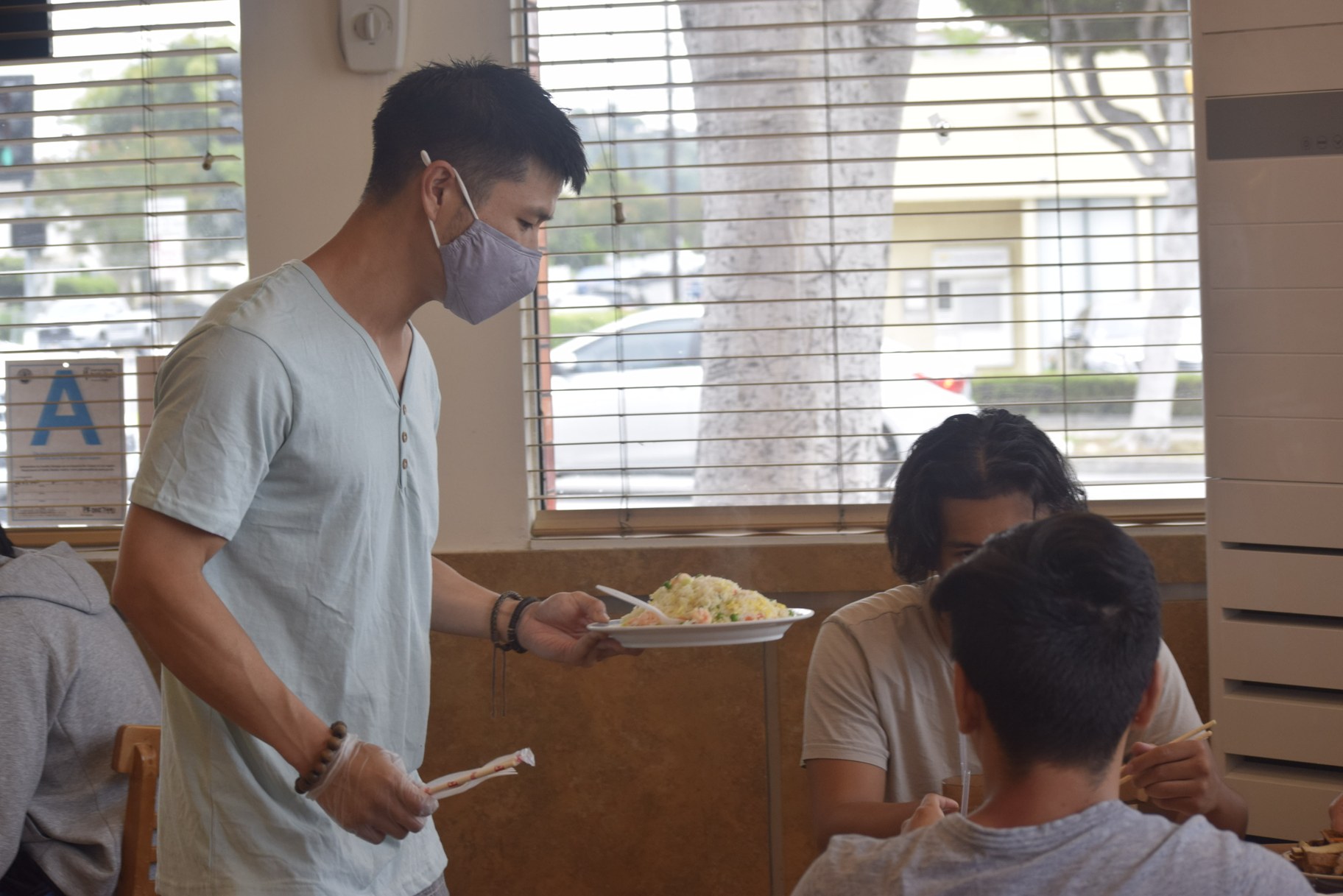 Customers dine-in at Mandarin Noodle House in Monterey Park for lunch on June 18, 2020. Los Angeles County allowed restaurants to reopen for dine-in in late May with additional physical distancing and safety rules. Photo by Phoenix Tso for KCRW.

“The dining room relies on the vibe, the dining experience, the engagement, the intimacy, the interaction, the closeness, and to take that away, that's like 95% of the experience,” said Chase Valencia, co-owner of LASA, a Filipino restaurant in Chinatown. This is one reason why LASA didn’t offer a traditional takeout menu until recently. They sold meal kits allowing people to prepare specialties like pancit palabok at home, with printed directions resembling a menu and a curated playlist to approximate the LASA ambiance.

On June 12, LASA debuted a new takeout menu, with proceeds partially benefitting Black Lives Matter. As for reopening dine-in, Valencia was unsure how to safely preserve the intimacy that he thrives on creating for his customers, when we spoke on the phone in May. “Now you're going to go inside the restaurant stressed out because of the [physical] distancing, your server has a mask on … it’s not the normal reason you go to a restaurant,” he said. 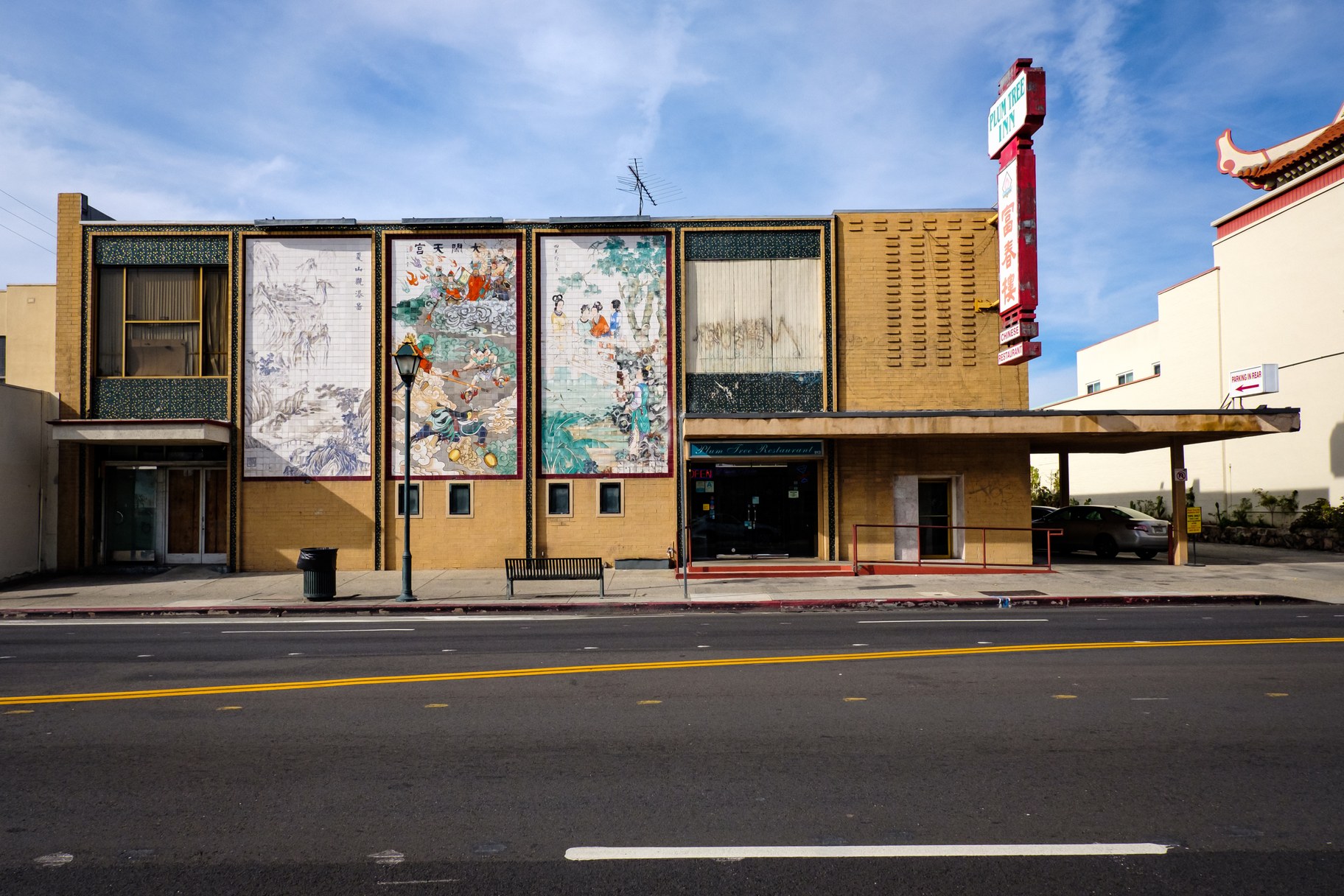 Several Chinatown small business ideas have applied for the federal Paycheck Protection Program loan in an effort to guide them through the pandemic, according to Elaine Pang, a small business counselor at the Chinatown Service Center. Photo by Kwasi Boyd-Bouldin for KCRW.

Restaurants throughout LA faced serious consequences from the pandemic shutdown. But for many restaurants in Chinatown and the SGV, the pain came sooner, especially for Chinese restaurants. Attendance was down for Chinatown’s annual Lunar New Year parade, as several restaurant owners told me, and tourism —which the neighborhood’s businesses depend on — has ground to a halt.

Racism also hurt business early on. “[Serving] Asian food is very difficult right now, because people still think we brought the pandemic over and you can get COVID from our food,” said Kristie Hang, a food reporter who closely tracks the San Gabriel Valley restaurant openings and closings impacted by COVID-19 on her Twitter and Instagram feeds. She estimates that SGV restaurants lost at least 60% of their business starting in February, and things got worse when the safer-at-home order came down.

Restaurants in Chinatown have suffered a loss in revenue, according to Elaine Pang, a small business counselor at the Chinatown Service Center. Pang has helped several restaurants and other Chinatown and San Gabriel Valley-based small businesses apply for the federal Paycheck Protection Program loan in an effort to guide them through the pandemic. Several restaurants I spoke to applied for PPP, but complained of stringent requirements for loan forgiveness, such as spending 75% of the money on payroll, and using it in two months. In early June, the federal government passed another law loosening those requirements. 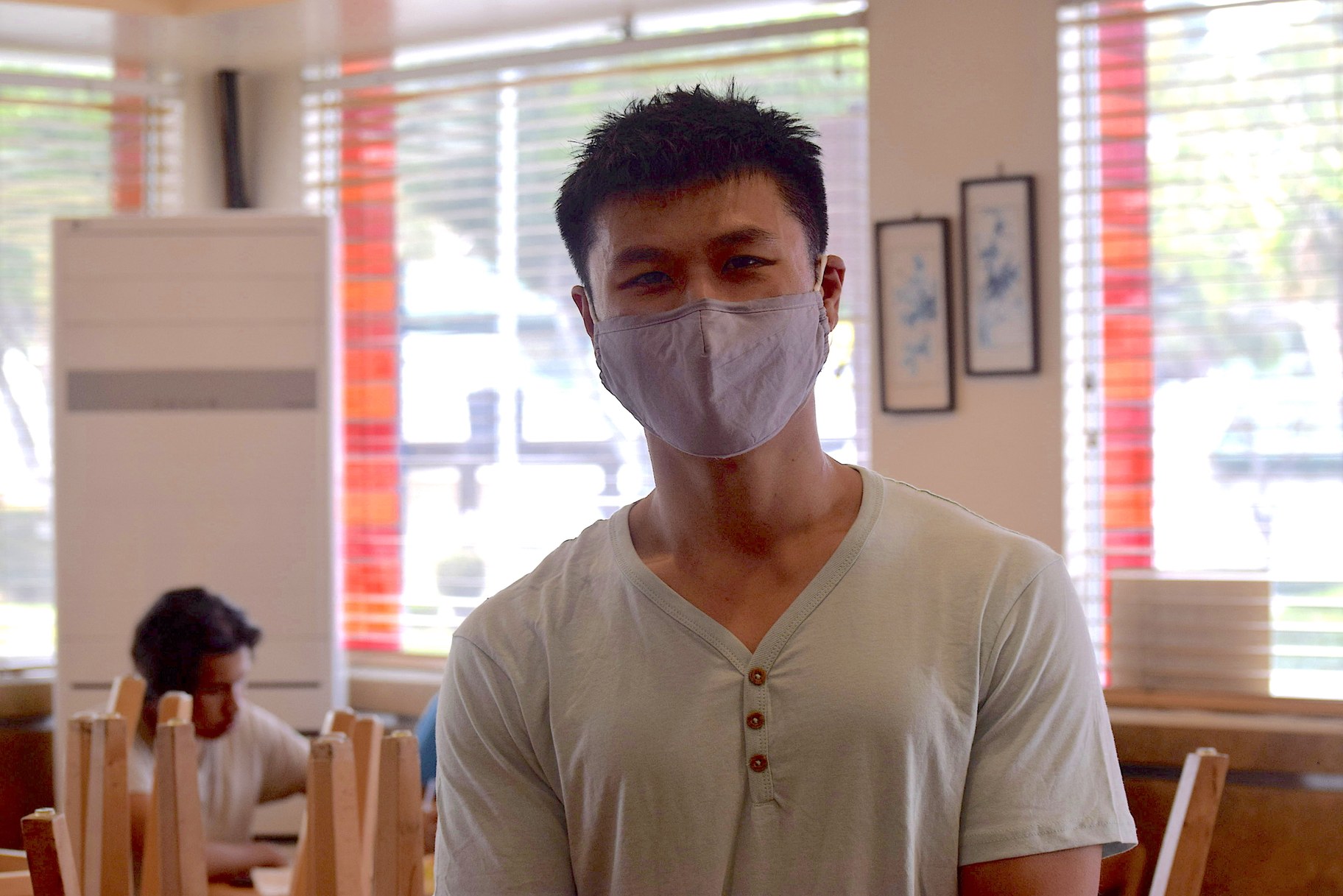 Denny Mu and his family have owned Mandarin Noodle House for 48 years, and reopened for limited dine-in for the first time in early June since Los Angeles County ordered restaurants to close their dining rooms in March. Photo by Phoenix Tso for KCRW.

Some SGV restaurants have been eager to resume dine-in, including Denny Mu, whose family has owned Mandarin Noodle House in Monterey Park for 48 years. Mu says he understands the safety concerns, “but people have to eat, people have to socialize.” Since reopening in early June, dine-in customers have only been “a trickle,” so Mandarin Noodle House still relies on takeout orders. 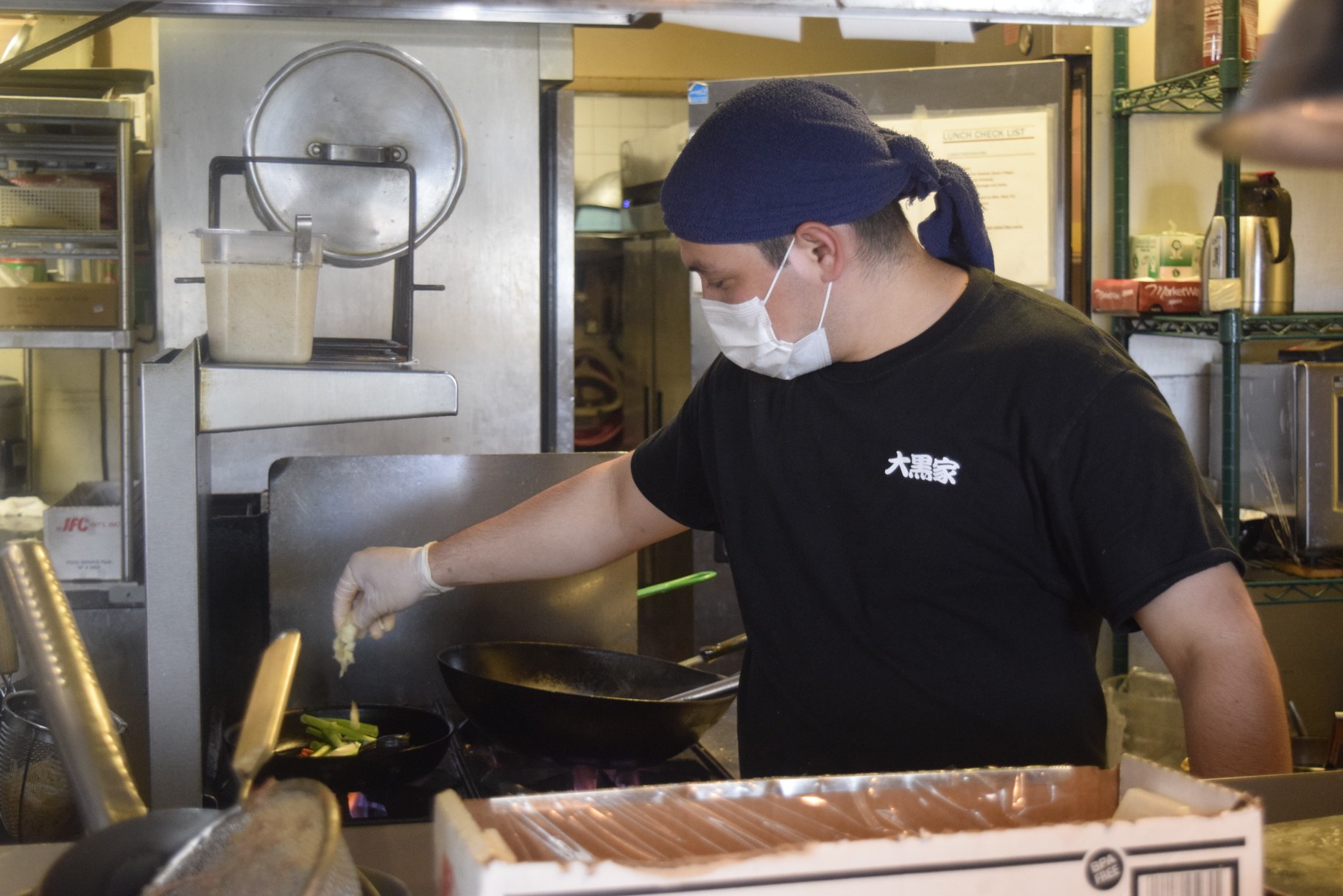 Staff prepare food in the kitchen at Daikokuya Monterey Park while wearing masks, part of Los Angeles County’s new guidelines for reopening restaurant dining rooms during the COVID-19 pandemic. The restaurant plans to place partitions separating the kitchen from the dining room, as well as between tables to keep customers safe. Photo by Phoenix Tso for KCRW.

The Daikokuya ramen restaurant’s Monterey Park location has also reopened for dine-in. Their counter will soon be outfitted with a partition to separate staff and customers, and tables already feature QR codes so that people can look at the menu online, said manager Tomoya Murakami, who believes that similar contactless dining measures are here to stay.

Many San Gabriel Valley restaurants have been diligent about hygiene and social distancing, with almost all the restaurants I visited posting elaborate protocols on their storefronts. The Vietnamese restaurant Golden Deli has their customers pay for to-go orders at one clear tarp-covered doorway, and then walk to a doorway on the other side of the restaurant to pick up their food. Other restaurants let their customers inside, but limit their numbers, while others even go as far as to sterilize cash and credit cards.

Some Chinatown restaurant owners expressed apprehension about opening for dine-in, saying that some of their customers are decidedly lax about wearing masks. Yet the vast majority of people I saw in the SGV one Sunday afternoon wore them. “I feel safer in the SGV, I feel like people are taking it seriously, and they’ve taken it seriously since the beginning,” Hang said. 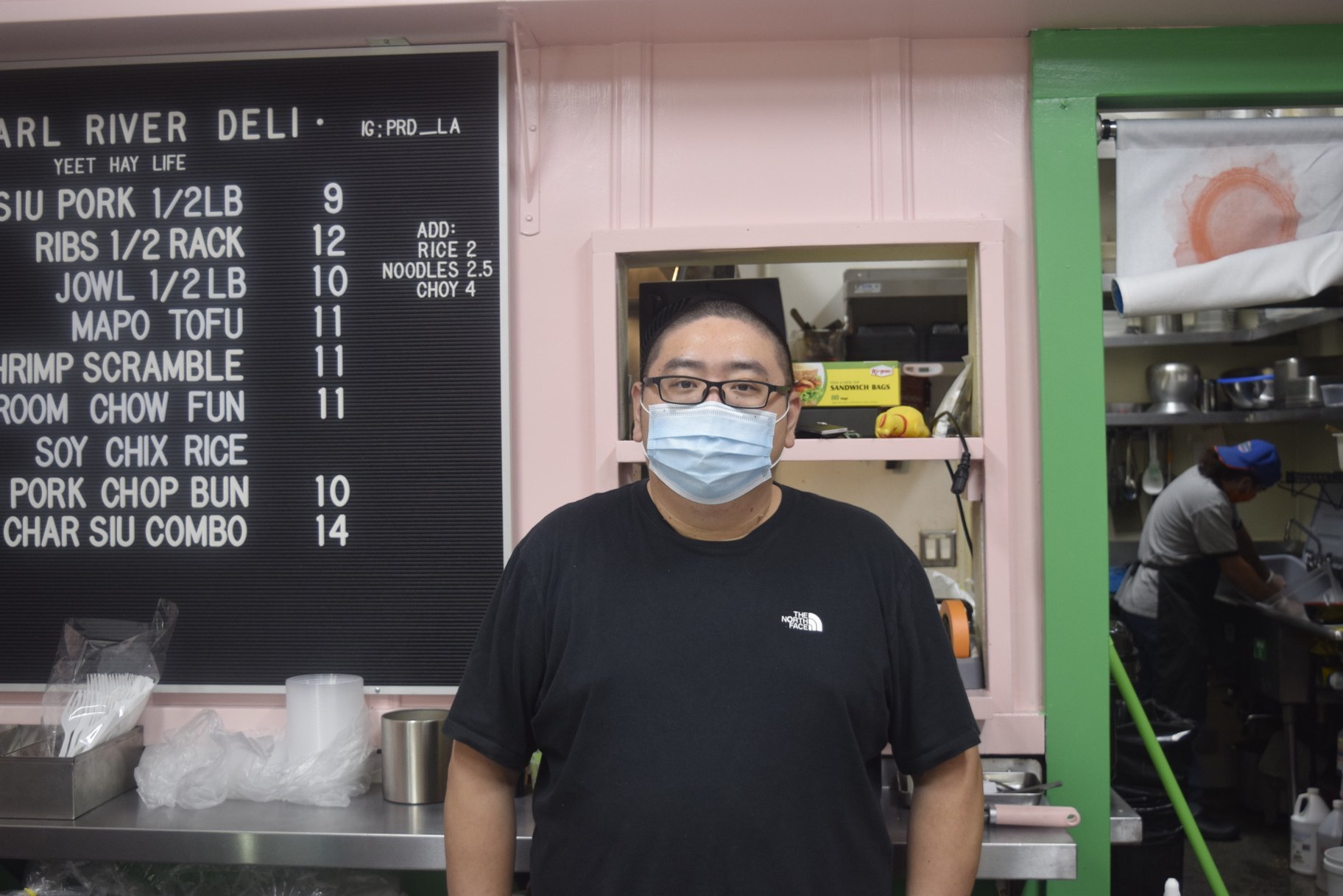 Johnny Lee of Pearl River Deli has joined most restaurants in Chinatown in taking a wait-and-see approach to reopening for the dine-in, until they can ensure customer and staff safety during the COVID-19 pandemic. Photo by Phoenix Tso for KCRW.

At the beginning of the shutdown, organizations circulated lists of Chinatown restaurants where people could order takeout and delivery. Johnny Lee’s Pearl River Deli opened in late January, right before the pandemic became serious, and it was able to ride the wave of social media support to buttress their business during the first few months of the pandemic. In May, Pearl River Deli hosted a vegan Chinese pop up called Bok Choy, where customers got a set meal of mapo tofu and egg rolls. “[We’re] just trying to help chefs who might not have the opportunity because their restaurants are closed,” Lee said.

It may be the mom-and-pop shops who don’t have the knowledge, time or resources to come up with a sophisticated social media strategy or to sign up for delivery services charging high fees that might suffer. “For the most part, these businesses are: you sit down for your bowl of noodles and you make the XLBs right there,” Hang says. “So a lot of these places have had a really hard time transferring to that system, because a lot of these Mom-and-Pop shops don’t have online order, don’t have GrubHub, don’t do all those things. And so I personally don’t think a lot of them are going to make it through this.” 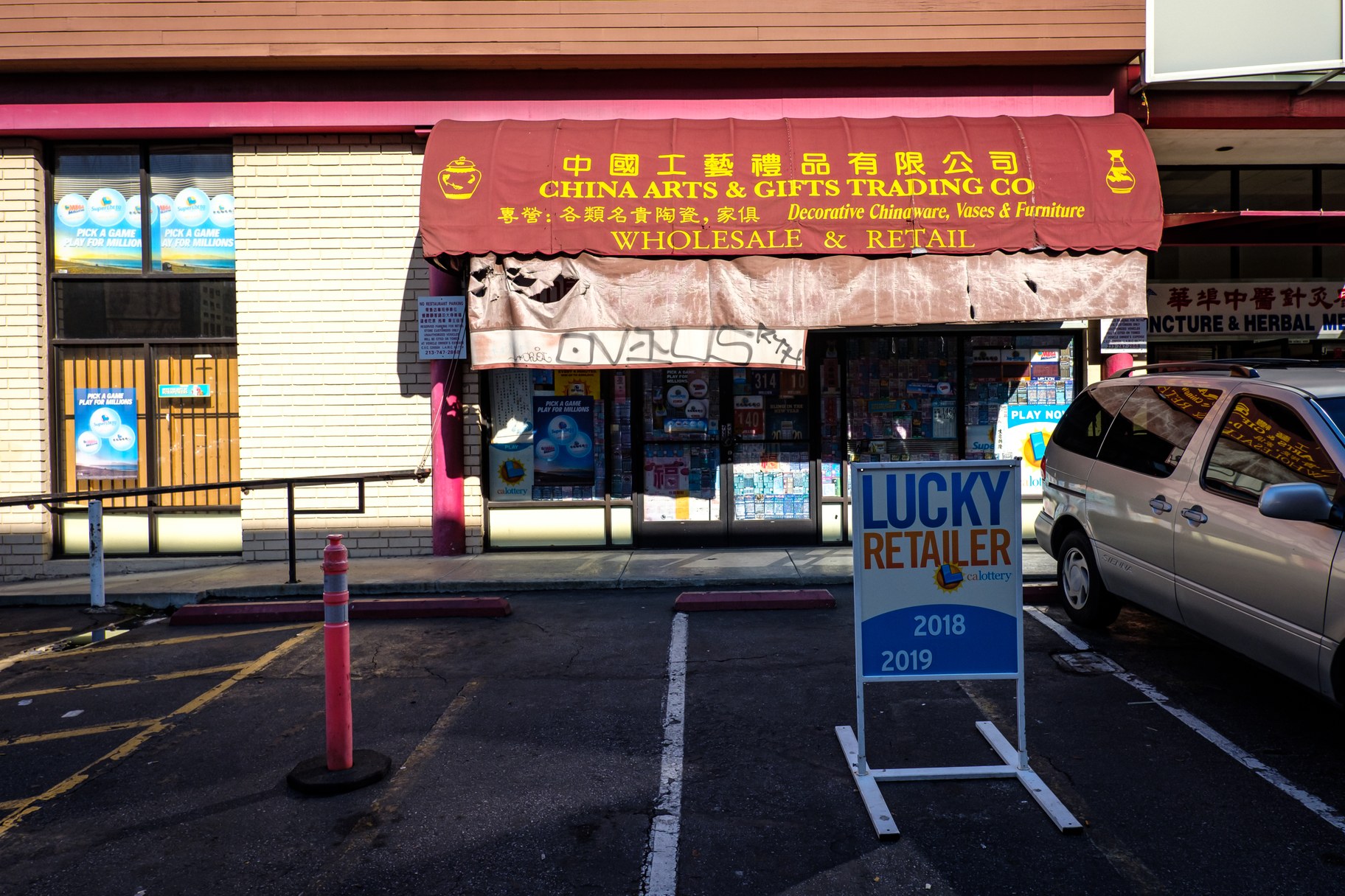 Food reporter Kristie Hang says that the mom-and-pop shops of Chinatown have had difficulty shifting to online business models. Photo by Kwasi Boyd-Bouldin for KCRW.

While COVID-19 has curtailed the IRL interaction that makes restaurant dining special, social media communities like SGV Eats are picking up the slack, with restaurant owners and food lovers sharing information about reopenings, menus and hygiene practices to keep people informed and to support local businesses. “There are constant changes with the Department of Public Health where they release guidelines on how to have dine-in options,” said Alan An, who founded the group, along with his colleague Brian Ngoy at the San Gabriel-based real estate firm PGI Estates. “A lot of members do take the opportunity to share what’s updated and what are the safe protocols.”

In May, SGV eats organized The Great SGV Take-Out Weekend, where they encouraged people to order takeout from participating restaurants, and those restaurants in turn would donate some of their proceeds to meals for frontline healthcare workers at two local hospitals. This event raised over $5,000, which went to 560 meals, along with baked goods also purchased at cost. The group also distributed donations of PPE. “It’s so nice to see that not only is the community supporting the restaurants, but the restaurants are giving back when they can as well,” said Megan Lam, the group’s lead moderator.

Hang has a similar goal for her social media feeds around fostering community support for San Gabriel Valley restaurants. She says that initiatives like these have helped remove the stigma around dining there. “People locally from here — some views have changed, which is interesting. I have been very vocal [about] telling people since the beginning what restaurants are open, what their sanitary measures were,” she said. “And I noticed that a lot of people that are not from the San Gabriel [Valley] actually started being more open to come to more Asian areas.”