From disabled to abled in Rwanda, Santa Barbara and worldwide

In 2008, two brothers from Santa Barbara traveled to Rwanda with their parents  and met a young man with no hands.

At first, it was a mutual curiosity. Then it turned into a friendship. Now, it’s a film.

Jacob and Isaac Seigel-Boettner were in college at UC Berkeley when they first met Frederick Ndabaramiye. Their parents were Santa Barbara teachers leading students on a bike tour. Jacob and Isaac came along to guide the trip. Ndabaramiye was one of many Rwandans who swarmed the white-skinned group traversing the African country, an unusual sight to see. Most Rwandans would write down their email address. So did Frederick, with his elbow.

“Since then, my brother and I have gone into filmmaking, and we’ve always thought how can we help share Frederick’s story,” said Jacob Seigel-Boettner.

In 1998, Ndabaramiye was maimed by the Interahamwe, a militia that had enjoyed the backing of the Hutu-led government during the Rwandan Genocide. Although the genocide was officially over, the Interahamwe was still active in Rwanda’s Western Province. When his bus was stopped by the military group, he refused to shoot the fellow passengers. After killing the people themselves, the Interahamwe cut off Ndabaramiye’s hands. The militia used Ndabaramiye to send a message to others: this is what happens when you don’t do what we say.

“When you hear it from someone who’s sitting right in front of you, and visibly bears the scars of that encounter, I don’t know if it will ever fully sink in what happened to him,” said Jacob Seigel-Boettner.

In the documentary, I Am Able, Ndabaramiye tells this story, and how it changed his life, by painting at Santa Barbara artists Karin and Jeff Shelton’s Montecito studio. 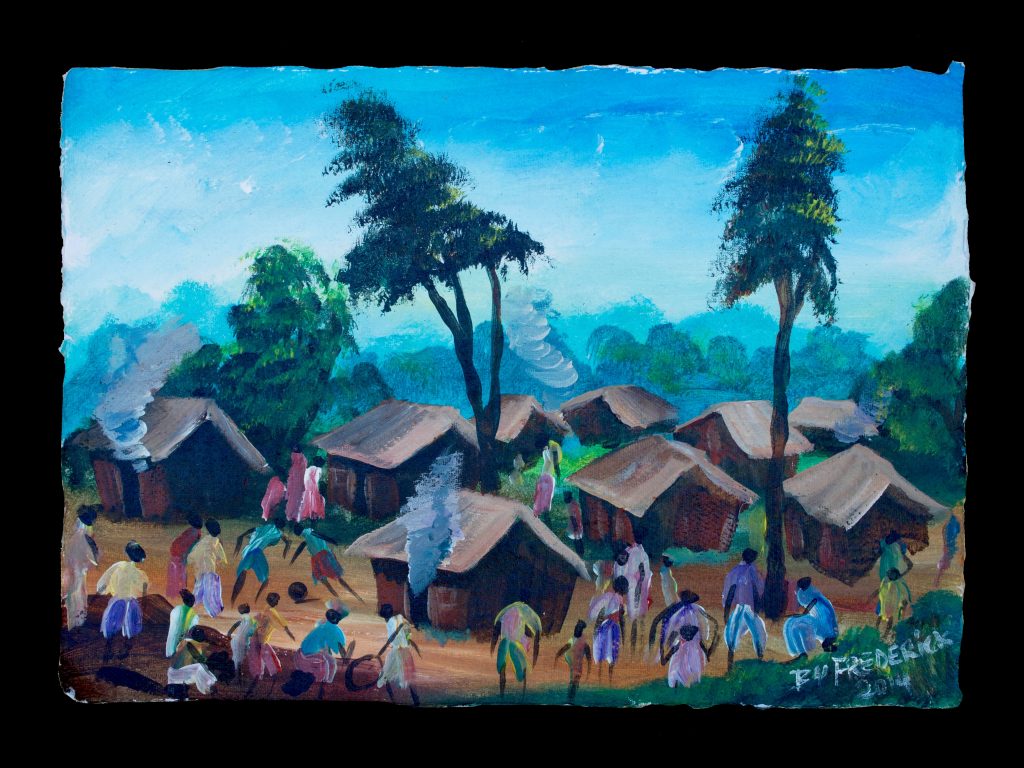 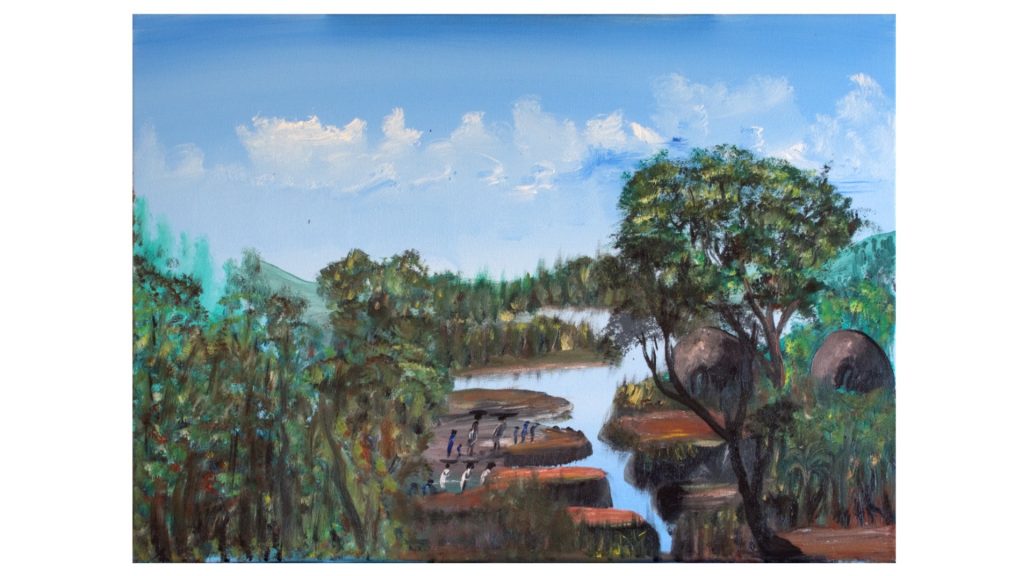 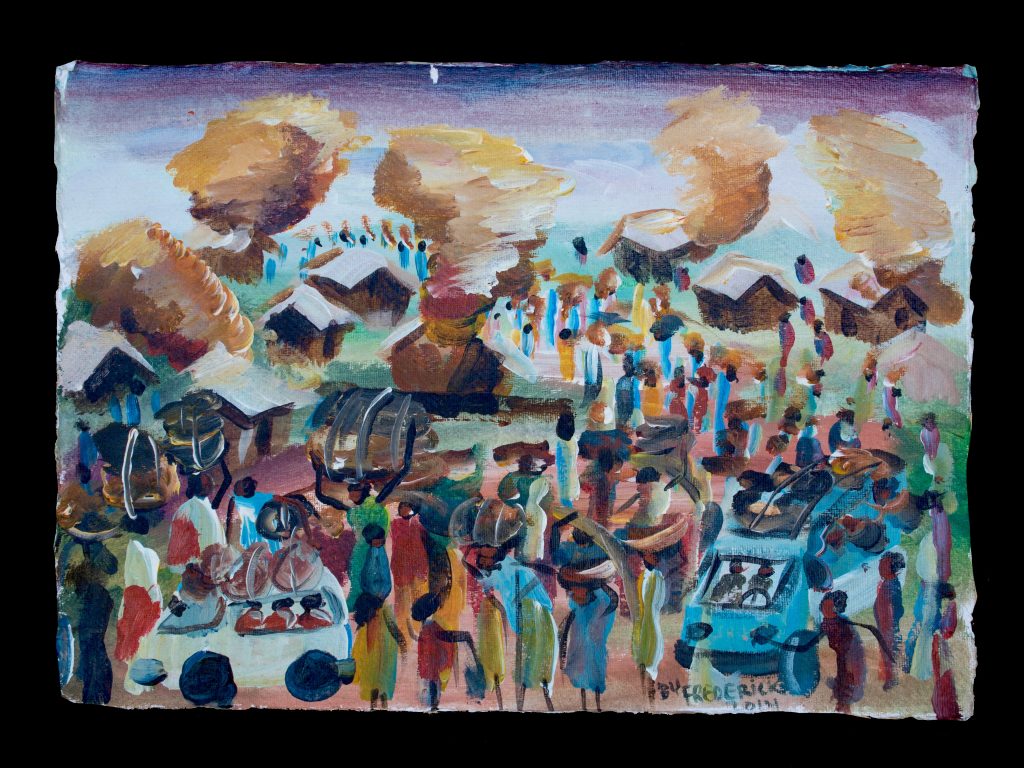 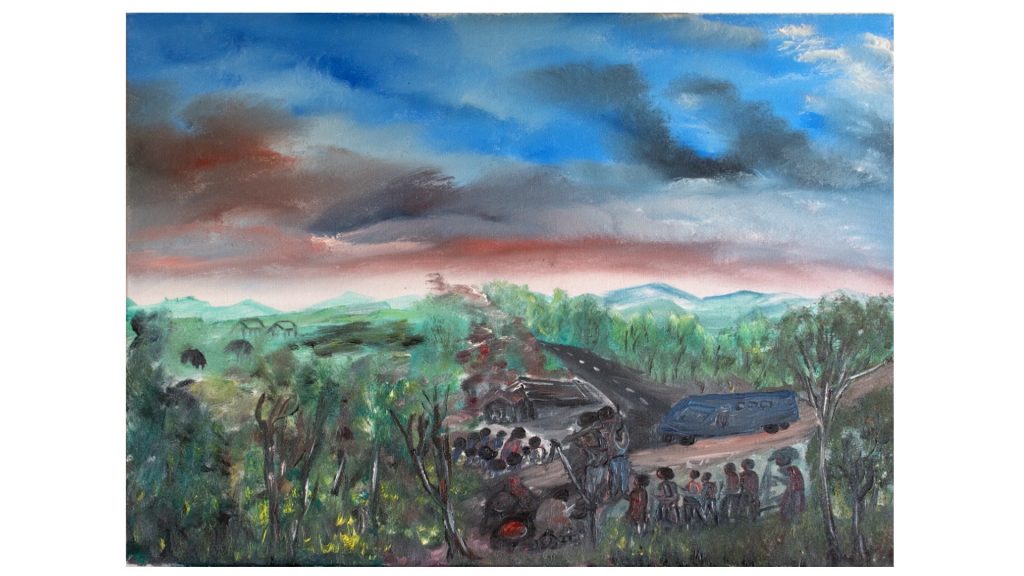 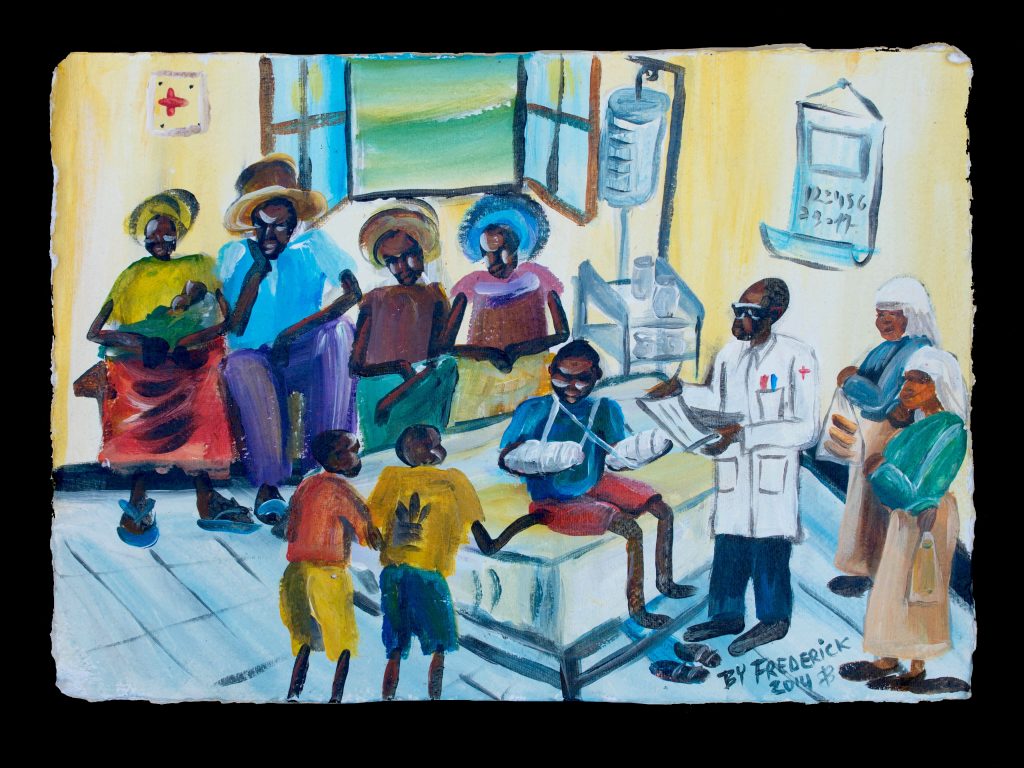 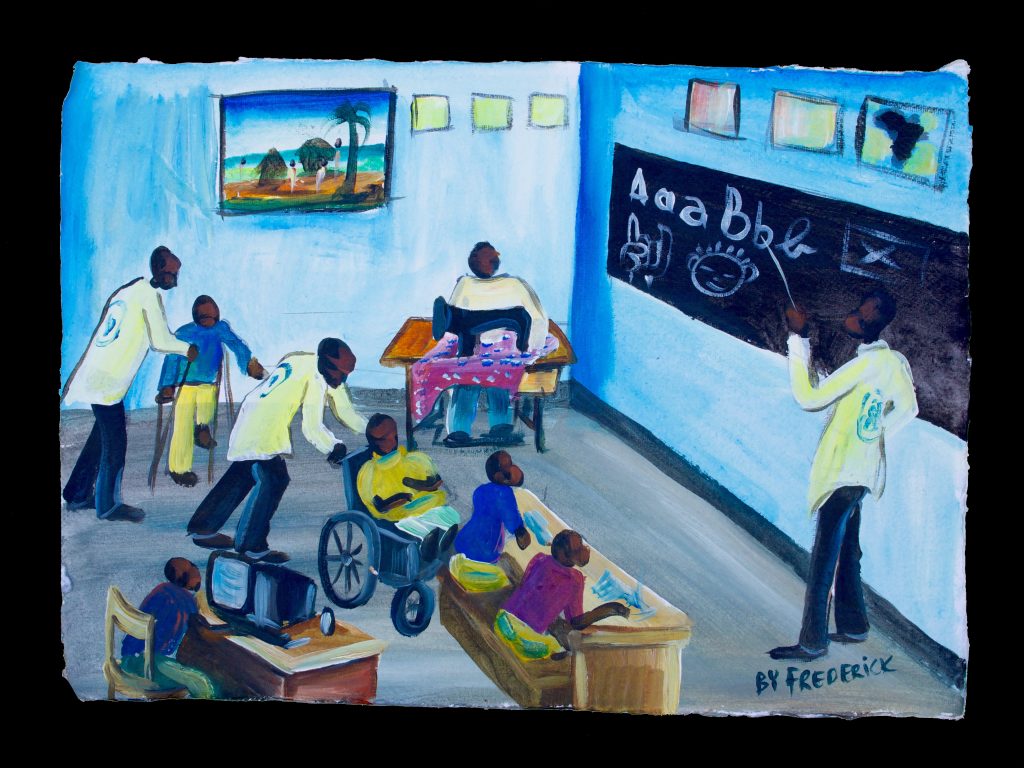 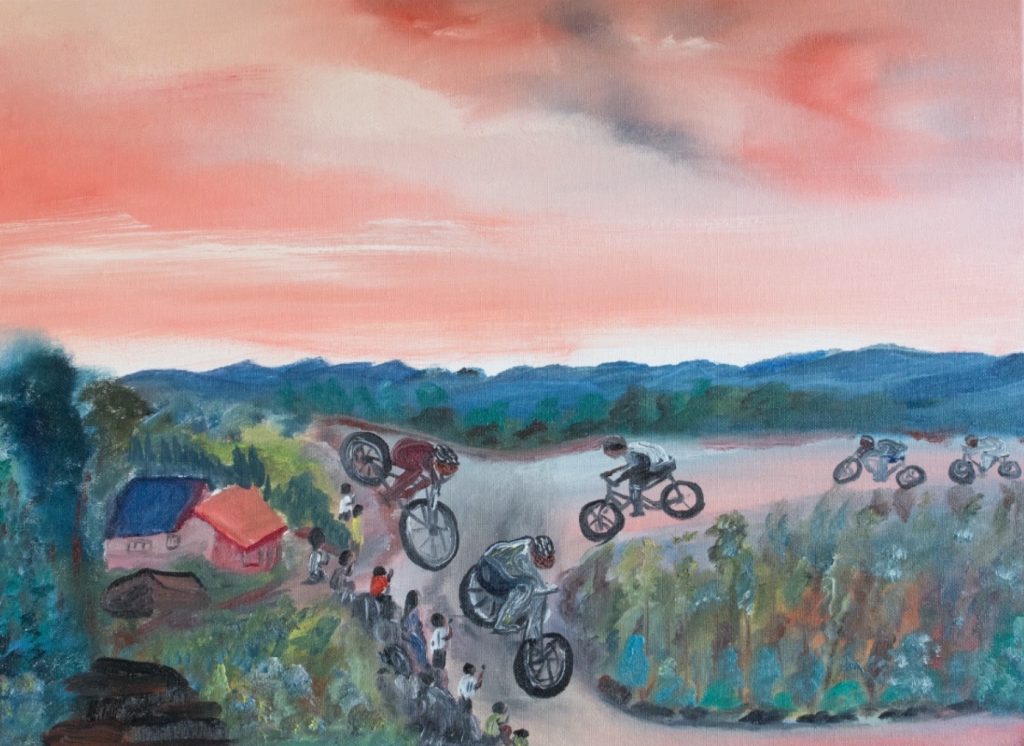 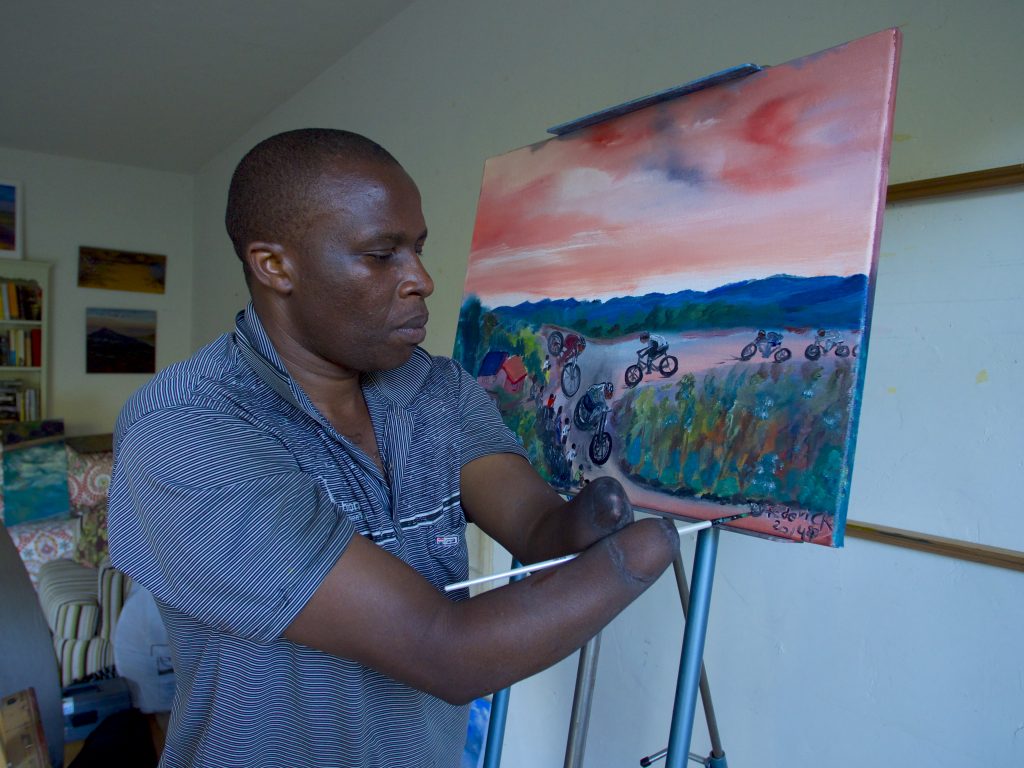 In his paintings, Ndabaramiye takes fragments of his memory and pulls them together. Like many victims of trauma, certain moments have been blocked from Ndabaramiye’s mind. He doesn’t remember specific faces. In a painting, however, none of that matters.

“We knew we wanted to tell Frederick’s story in his own vision,” said Seigel-Boettner. “We could go to Rwanda and film recreations of the places where these things happened, but they’re not the way he remembers them. I think his story is all the more powerful when it’s in his voice and in his mind.”

His crusade has led him to the United States (he’s even given a Ted Talk) but much of his work is done in his home country.

“Disability in Rwanda is not only a huge social stigma. It’s also a huge economic burden,” said Seigel-Boettner.

According to Ndabaramiye, many Rwandan children with disabilities are locked in a room in the back of the house. Parents don’t have the education or resources to know what to do. That’s why he started the Ubumwe Community Center, where people with disabilities can go to learn skills and become self-reliant. Ndabaramiye regularly bikes to rural towns to spread the word about his project. He said it’s often the first time people have seen someone with disabilities ride a bike.

To Seigel-Boettner, Ndabaramiye’s mission correlates to what he and his brother want to achieve through their work.

“As filmmakers,” he said, “we’ve always tried to have our films tell a story that gets people to ask questions and reconsider a notion that they thought was concrete and established in their lives. This is our tiny way of helping Frederick share his story.”

I Am Able is currently on tour with Telluride Mountain Film. For more info, click here.