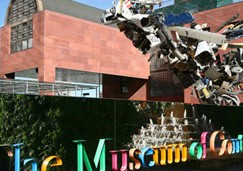 The Los Angeles times reports that Los Angeles County Museum of Art  in talks to take over the Museum of Contemporary Art.  In a letter to the MOCA’s board, LACMA Director Michael Govan and the two co-chairs of his board made the case for taking over the museum. The LA Times reports that LACMA “would preserve MOCA’s two downtown locations and operate them under the MOCA name, according to people who have seen the letter but were not authorized to discuss it publicly.” MOCA has faced  financial difficulties and a recent backlash to the departure of curator Paul Schimmel under Jeffrey Deitch’s leadership. (LA Times has the full story.)

Combining LACMA and MOCA would strengthen both.  LACMA’s mission is to share world-class art with the widest array of audiences possible. MOCA’s downtown location, extraordinary collection and devoted constituency, combined with LACMA’s modern art masterpieces, large audiences and broad educational outreach (especially in schools near downtown L.A.) would create a cultural institution that is much more than the sum of its parts. LACMA’s strong leadership, its history of fundraising, and its support from Los Angeles County and other donors will provide MOCA with the stability it deserves.  (More here.)