In the first decades of the 20th century, the French painter Robert Delaunay painted the Eiffel Tower from multiple views to capture the energy of modern Paris; around the same time John Marin painted the Chrysler building in New York with the same aim, splintering and slicing the skyscraper in a way that echoed the pace of urban life. They sought to emulate the feel of the city along with its appearance. That urge is effectively satisfied in contemporary terms in the recent photographs of Jeremy Kidd, including his own Chrysler 2 (2006), a view of the famous skyscraper appearing to burst upwards in the company of newer architecture in New York City. His show Temporal Excursions is at Leslie Sacks Contemporary in Santa Monica through July 20.

Photographs composed from multiple perspectives are not new. David Hockney became enchanted with the method using Polaroids. He believed it a more accurate way of representing what the eye actually sees, something the Cubists had explored.

Kidd, however, explores this notion in a digital era. His photographs don't just represent passing time, they embody it. Kidd spends hours, often during the un-peopled night, taking hundreds of digital photographs with a wide angle lens of a cityscape and then stitches them together in Photoshop to create a single composition that is both more representative of the magical time and place and something of a glittery fantasy. Take his 2013 Tower Bridge I. There is no shortage of dramatic pictures of London but Kidd's composition brings together the romantic history and the sharp-edged present. And there is so much to attract the eye, the lights glowing in and around the shiny new buildings, the bridge in the distance, moon, stars, chains of hanging lights.

Back to Hockney, who said that he got bored looking at photographs until he devised his method of multiple perspectives. Boredom is not an option when confronted by Kidd's photographs. The eye bounces kinetically from detail to detail, mentally questioning the possibility of truth in what is presented. He does not artificially extend the photographs into a conventional rectangular format but allow the process to dictate the borders, which are angular and jagged, architectural in their own way. 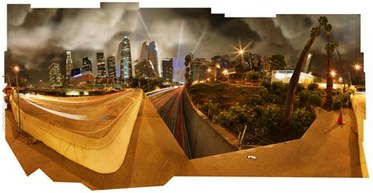 Kidd's own inspiration is not Hockney, cinematography or the Cubists but the 19th century American painters Thomas Cole or Frederic Edwin Church who painted grand idealized visions of the landscape. They were known for representations of light as metaphor for divine presence. Kidd represents urban architecture with the grandeur imposed by the Luminist landscape painters. He captures passing time and changing light but, as he says, he uses pixels instead of paint.

Kidd has applied his complex technique to the landscape, especially in the desert of the American West. These are very satisfactory and closer to the Luminists in the concentration on the sky though without the immediate impact of the architectural cityscapes. Together they play like loud and soft compositions by the same musician. 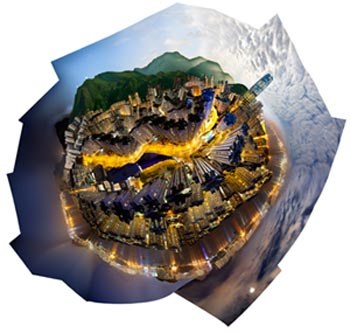 Kidd, who is English, is the grandson of two famous English artists, Ben Nicholson and Barbara Hepworth. His mother, too, is a painter. Though deeply and personally familiar with the modern impulse, Kidd's technique is unique to our times and has earned him commissions around the world. One fascinating work in this show is the aerial view of Hong Kong, Taikoo Island East (2011).

For more information, go to lesliesackscontemporary.com.