This week: DEMO at the MAK Center makes art out of the process of demolition; forage through a FORT: LA trail of witch houses; explore the design industry's role in politics and urban solutions with cityLAB; consider Destination Crenshaw and designing for Black Angelenos with Gabrielle Bullock; and celebrate the dead with a traditional Victorian Mourning at Heritage House Museum. 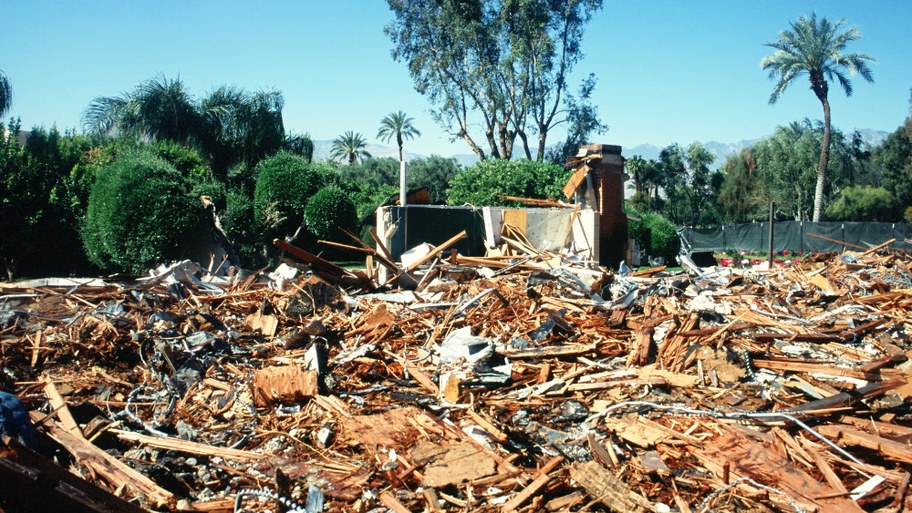 Photo: Courtesy of MAK Center for Art and Architecture

1) DEMO at the MAK Center

Once it's gone, it's gone. But how something goes can take different forms, say Priscilla Fraser and and Anthony Carfello, curators of DEMO, a group exhibition at the MAK Center for Art and Architecture at the Schindler House.

A house in Southern California "may be purchased for the sole purpose of destruction," they write. "An Alpine family vacation home is dismantled brick-by-brick by the daughter of the builder." DEMO explores the lines between demolition, transformation, and extinction, and reckons with the erasure of history in Southern California, where buildings are regularly thrown away and “touchstones of identity” can no longer be touched."

Artists Nazgol Ansarinia, Margarethe Drexel, Lexis-Olivier Ray, and Yan Tomaszewski have created four different records and results of four different spatial ruinations in the landmark R.M. Schindler-designed Kings Road House: one in each studio, each suggesting that wrecking balls are not final acts. 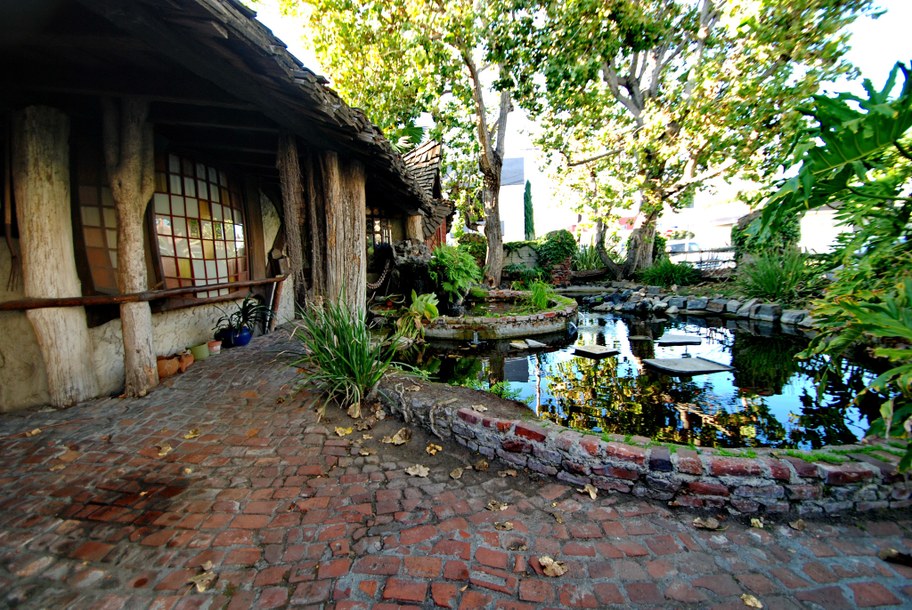 Architecture preservation group Friends of Residential Treasures: Los Angeles (FORT: LA) invites you to summon the spirits from the safety of your car this year with this self-guided tour of five 'witch' (or warlock) houses lurking in the spooky underbelly of Los Angeles' bleached facade. While you won't be able to see the interiors of these mostly 1920's homes, thanks to 'Witches of Echo Park' author Amber Benson, you will be guided by a curated, self-guided itinerary.

Highlights include hobbit homes in Culver City that seem straight out of the Shire, a Los Feliz house that looks a whole lot like the nearby Tam O’Shanter, a small castle in Eagle Rock where Ben Affleck and Matt Damon penned Good Will Hunting, a Beachwood Canyon cottage that once boasted Humphrey Bogart as a resident, and a row of pint-sized Burbank homes that wouldn’t be out of place in Snow White.

When: Celebrate Halloween during the month of October

Where: The Trail: Witches Houses. You can register here for locations, along with a cheat-sheet on all the properties + a deeper dive 70-page PDF with more detailed information and photos of interior details, historical images and newspaper clippings. 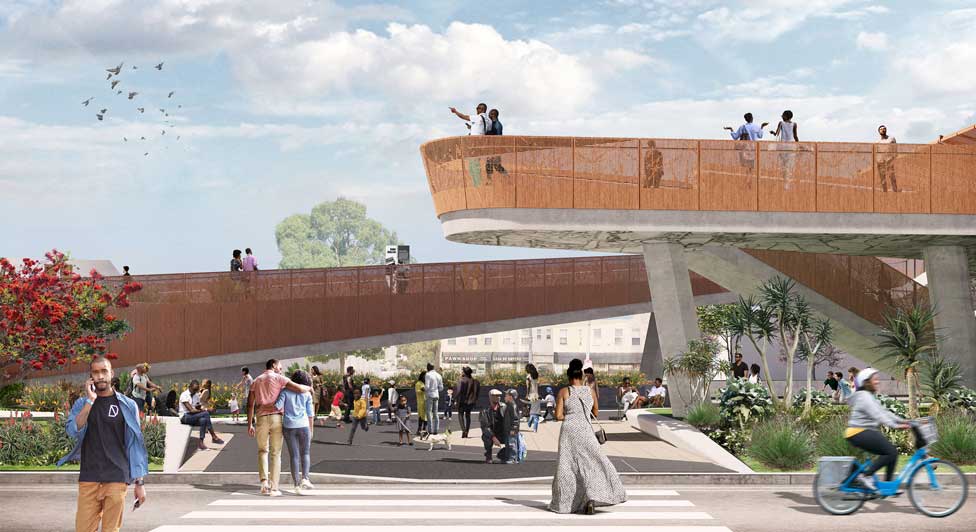 Image: Destination Crenshaw designed by Perkins and Will

4) Gabrielle Bullock and guests talk about Destination Crenshaw, and More

Public works projects have a shameful history of disproportionately adversely affecting communities of color - think how the Los Angeles freeway system routed freeways through communities of color and served as a divider between struggling black and more affluent white neighborhoods. The Metro Rail extension connecting LAX to central LA could easily have been just such a project where the line runs above ground at Crenshaw Boulevard in the heart of Black LA. Instead, an opportunity was seized to foster the area’s strong arts culture with the creation of Destination Crenshaw, designed by Perkins and Will.

Gabrielle Bullock, Principal, Director of Global Diversity, Perkins and Will, and co-designers will discuss Destination Crenshaw as a vibrant example of what is possible and how to best celebrate Black LA. They will reflect on how architects, landscape architects, interior designers and urban designers can meet the needs of communities of color and specifically Black communities.

Tickets: General Admission $20. You can get tickets and register here. 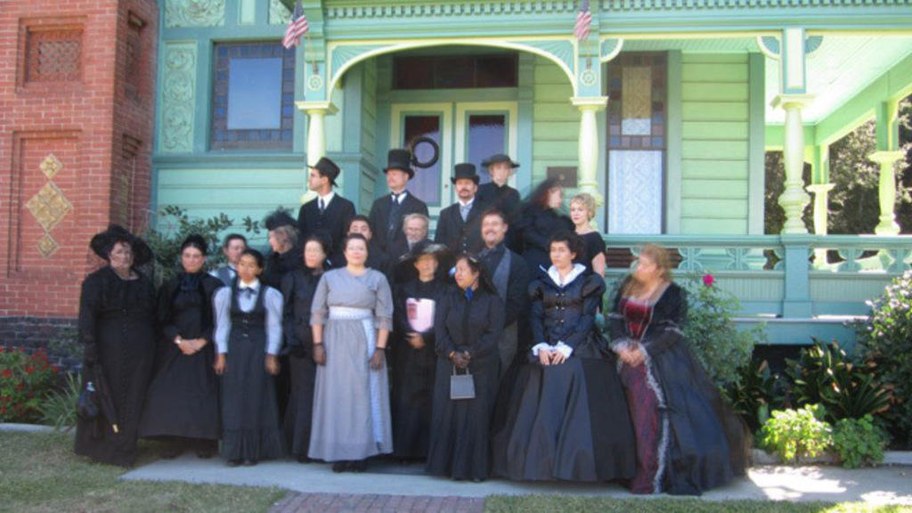 Advances in industrial technology, combined with the great Southern California Land Boom of the 1880s, resulted in a proliferation of elaborate and eclectic architecture throughout Los Angeles. By the late 1960s, this architecture, characterized by gabled roofs, windowed turrets and intricately detailed woodwork was threatened with extinction by the densely developing urban community. Preservationists stepped in and saved eight historic structures from demolition. These historical treasures have since been relocated and are in the process of being restored on the site of the Heritage Square Museum.

This weekend - in anticipation of Halloween - Heritage House Museum celebrates the dead with a traditional Victorian Mourning Faire. Feel free to costume accordingly. Appropriate attire for women would be black to symbolize spiritual darkness, with some crape fabric and jet jewelry, a hard, black coal-like material sometimes combined with woven hair of the deceased. Men can wear their 'usual dark suits along with black gloves, hatbands and cravats.'

You can learn more about the eight historic homes that comprise Heritage Square Museum here.