One of the six paisley sculptures that makes up “Mismo,” an installation by Sofia Enríquez. Photo by Avishay Artsy/KCRW

The Coachella Valley Music and Arts Festival is back for its 20th year, and as you’ll know already from Instagram, the desert bacchanal is no longer defined only by the music.

Creating a large-scale and eye-popping installation at Coachella has become a coveted commission for artists and designers.

“Ultimately the power of Coachella is two things,” says the Palm Desert-based artist Phillip K Smith III. “I think one is to be able to implement a project at an impressive scale. And secondly, I don't know anywhere else in the world where you can have 250,000 people see your work over the course of six days.”

We also caught up with Raffi Lehrer, associate art director at Goldenvoice. He has the job of picking the designers and making sure their structures get built to handle the crowds.

A successful installation, Lehrer says, “needs to create a great shot, look beautiful, grab someone's attention, and have multiple depths that your typical festival goer who's maybe not gone to a museum ever or doesn't go regularly can get something out of it.”

The installations at Coachella serve as gathering spots and landmarks in a pop-up mini city in a vast, flat field. 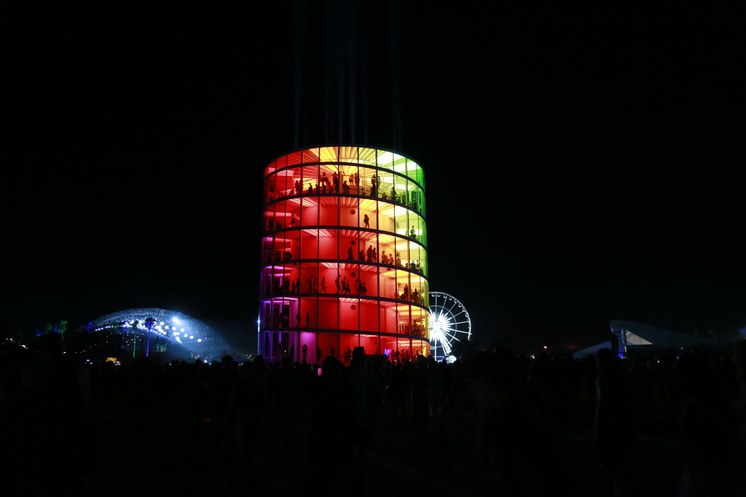 At night, Spectra serves as a beacon in the heart of Coachella’s polo fields. Photo by Avishay Artsy/KCRW

And where older cities might have a tall beacon like a clock tower, at Coachella you will find Spectra, a seven-story, transparent cylinder made up of over 300 windows of more than 30 different colors.

You climb a ramp that circles round and round to the top, taking in a view across the festival grounds and beyond to the mountains all around.

At night, Spectra becomes a gorgeous big lantern with dark silhouettes of people moving through.

This is one of the few installations that is back for a second year.

Its designer is Patrick O’Mahony. He is creative director for a design company called New Substance based in Leeds, in the UK.

“When we were starting to design for the festival, we were very captivated by the amazing sunrise and sunset. But it always seemed a very distant concept. The sun rises always behind the mountains, always in the distance. What we wanted to do was allow people to walk through that sunset and sunrise. So we cast all the colors and when you're within the structure you're washed with those colors during the day,” O’Mahony said. 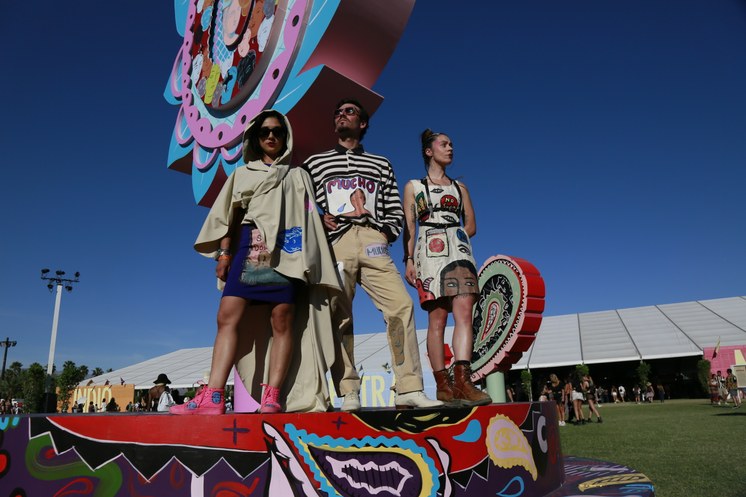 Sofia Enríquez, left, participates in a fashion show of her handmade and hand-painted clothing line “Mucho” in front of the installation she created for Coachella, “Mismo.” Photo by Avishay Artsy/KCRW

Coachella started 20 years ago as a lowkey and fairly chaotic rave in a field -- primarily attended by Southern Californians.

Over the years it’s grown into a global juggernaut.

For a young, local artist, muralist and fashion designer named Sofia Enríquez, Coachella has been her personal beacon.

She grew up in Indio and began attending the festival at 16. Now 26, it “feels like a dream” to have an installation in the main field.

“To tell my 16-year-old self, hey, you're going to have a piece a Coachella. She would be like, nah. I was always into art and stuff but I never would have imagined to be at this level.” 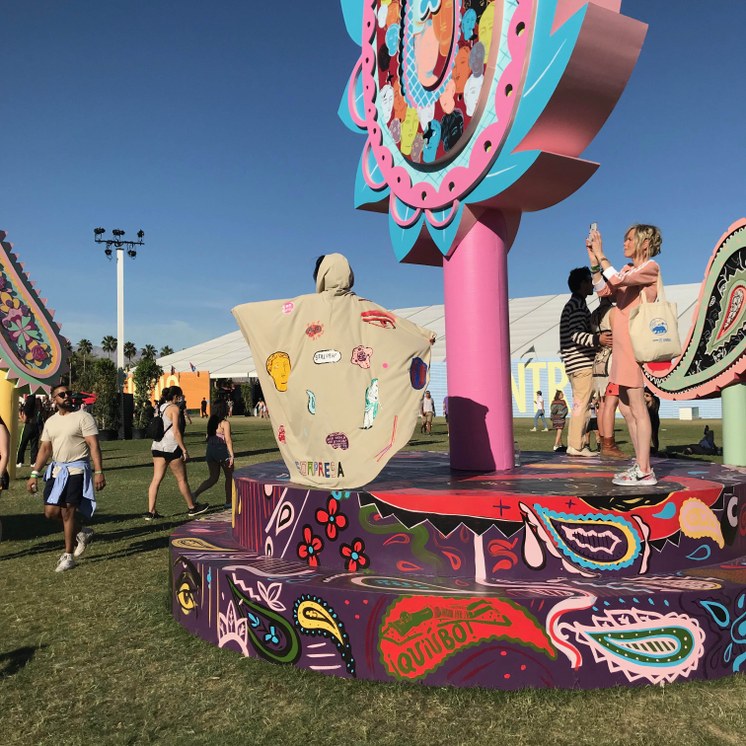 Sofia Enriquez models her painted shirt-cape on the podium at her Coachella artwork, “Mismo.” Photo by Frances Anderton/KCRW

Enríquez’ piece is called “Mismo,” which means “same” in Spanish, and it consists of six large wooden murals in the shape of paisleys. They are painted with faces and other symbols that are common in her paintings.

The paisley symbol connects to her experiences visiting people’s homes across the Coachella Valley while working with her mother, who is a house cleaner.

Thanks to Greater Palm Springs for their support of our Coachella coverage.

The Coachella Valley Music and Arts Festival is back for its 20th year, and as you’ll know already from Instagram, the desert bacchanal is no longer defined only by the music.

Even if you did not make it to the Coachella Valley Music and Arts Festival for this, its 20th year, you may have seen the work of Diébédo Francis Kéré.