Los Angeles needs to build more housing. Many Angelenos need help paying the mortgage. Is the solution to both in our backyards?

“Your house can have a baby. You can make the baby work,” said Diahanne Payne, a longtime building contractor and founder of “Illegal Additions Made Legal.”

In the second show in our series “This is Home in LA: From the tent to the gigamansion, (and everything in between),” DnA explores ADUs, or Accessory Dwelling Units -- and asks if they might help solve the housing crisis while adding equity to costly single-family homes.

DnA talks with planners and elected officials who have fought to legalize backyard homes, both existing unpermitted units -- of which there are thousands in LA, commonly known as granny flats -- and new structures.

We meet a Highland Park couple who agreed to build an ADU as a test-case, in collaboration with Councilman Gil Cedillo’s office, the City of LA and the mayor’s innovation team as well as several nonprofits: designers LA Más, builders Habitat for Humanity, and financiers Genesis LA.

“The purpose of the entire project was to push policy, and it was to reexamine the current policies and how they reflect how people are actually living in LA these days,” says homeowner Grace Lee.

She and her husband Trent Wolpe found that building an ADU is complex, costly and full of surprises, such as finding the sloping site need deep caissons and that they needed to conform, at a price, to the design demands of the local HPOZ (Historic Preservation Overlay Zone).

In response to lessons learned, Ken Bernstein of the City Planning department’s Office of Historic Resources, says HPOZs can no longer impose design specifics on ADUs, only height and width limits.

The legalization of ADUs represents a mini-building boom and has builders, consultants and designers coming out of the woodwork, some of who see ADU’s as a vehicle for design experimentation.

DnA talks to the CEO of a firm that promises to streamline the mass-production of ADUs through deploying computational design and software. One of its investors was an early investor in AirBnB and SnapChat.

Meanwhile, some designers have more fanciful ideas in mind, such as Jimenez Lai and his firm Bureau Spectacular, which was shortlisted in a recent Yes to ADUs! design competition. His solution: idiosyncratic structures full of character, “somewhat pleasantly human like or animal like with arms and legs and hats.”

He also that a street of ADUs should combine to form a shared piece of local infrastructure. “If they generate electricity; if they process water; if they help with a kind of community fermentation station, then there's some agricultural or other productive use meant for the block, not for the property.”

Concepts like Lai’s may be a little far off in the future. Right now, the goal is to get going with building some ADUS, and have people’s homes become both income generators and participants in solving the region’s housing needs. 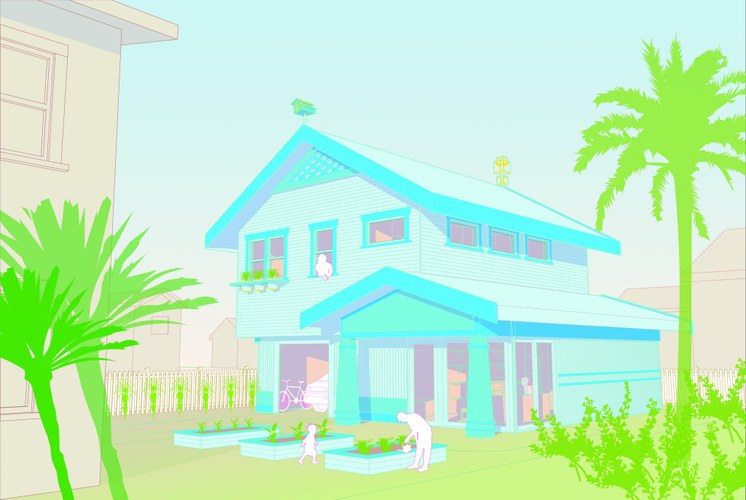 Los Angeles needs to build more housing. Many Angelenos need help paying the mortgage. Is the solution to both in our backyards? “Your house can have a baby.