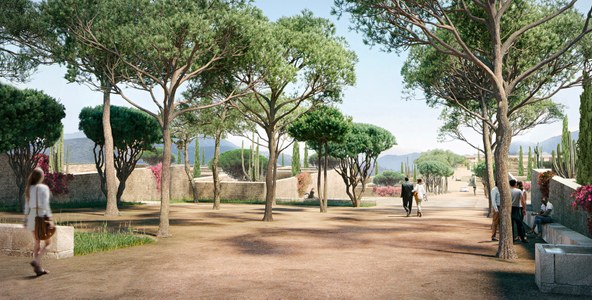 There's an ambitious plan for a site high in the Santa Monica Mountains, west of the 405 and just north of the Getty. Nicolas Berggruen, the billionaire investor and philanthropist, plans to build the Berggruen Institute, a research center and think tank devoted to governance and philosophy, designed by Swiss architecture firm Herzog & de Meuron.

Renderings of the campus show three main components: an almost 100,000-square-foot institute, a one-story, long low building that is lifted off the ground and made of a raw concrete frame and roughened wood panels. Protruding above this are two large spheres, one of which will hold water. Then there's a 28,000-square-foot scholars' village of sunken, adobe-style buildings. The spheres, says Berggruen, "anchor the building but also lets you dream a little bit." Spread across the more than 400 acres of land, a one-time landfill, will be walking trails for the visiting scholars to reflect and explore the restored natural beauty.

But there is already pushback against Berggruen's project from neighboring homeowner associations. DnA looks into the purpose of the institute, and how he hopes to win over skeptics of his plans with an ecological approach to the site. We also talk about the other campus Berggruen is building in MacArthur Park, designed by Spanish firm SelgasCano.

Berggruen Institute, 'Condemned to Be Modern'

Alexandre Arrechea, Havana, 2015 Image courtesy Galeria Nara Roesle In the late 1950s, the art critic Mario Pedrosa said that Brazilians were condemned to be modern. He...