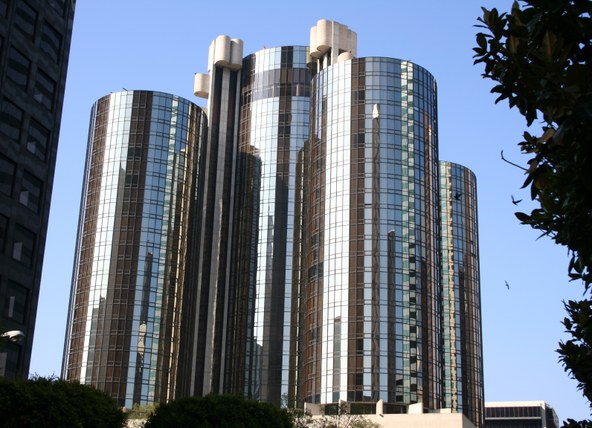 The Westin Bonaventure Hotel in downtown Los Angeles, designed by John Portman and completed in 1976. Photo by Jim Winstead/Flickr.

John Portman, the architect and developer of gleaming hotels and office buildings that defined the future back in the 1960s and 70s, died this past Friday at age 93.

Angelenos will best know him as the architect of the iconic Westin Bonaventure Hotel, completed in 1976.

The hotel was part of the wholesale redevelopment of Bunker Hill, and its design -- four cylinders of shiny brown glass and flying see-through elevators -- was in the spirit of the car-based planning of the area with elevated pedways and entrances via underground parking structures.

Initially heralded for helping revitalize downtowns, Portman’s buildings came to be criticized by a new generation of planners for their lack of connection to the streets around them. But the futurism of the Bonaventure Hotel made it a constant source of inspiration for movie-makers.

DnA talks to the LA Conservancy’s Cindy Olnick, who grew up in Georgia and recalls the thrill of his Peachtree Center district.

Ken Bernstein, manager of the City of LA’s Office of Historic Resources and Principal City Planner, reflects on the Bonaventure’s impact on his appreciation of Los Angeles architecture.

Craig Hodgetts, architect and keen student of futurism, talks about how Portman channeled the popular science and culture of the time -- and why he had to become a developer to create his visionary buildings.

John Portman, the architect and developer of gleaming hotels and office buildings that defined the future back in the 1960s and 70s, died this past Friday at age 93....

At the intersections of Venice, Washington and National Boulevards just adjacent to the Metro Expo Line is a bite-size mall called Platform that is emblematic of the changes...