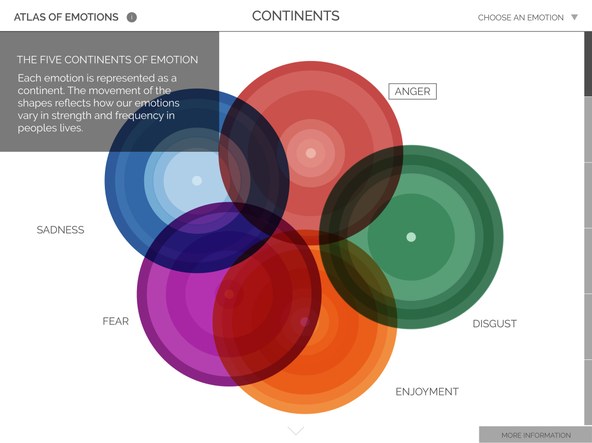 Atlas Of Emotions, an interactive tool designed to build emotional awareness, inviting users to visualize, identify and explore five primary emotions in order to gain a better understanding of how they influence daily life (2016). Project partner: Paul Ekman and His Holiness the Dalai Lama. Photo by Stamen Design

The world is awash in data, so some are looking for more creative ways of expressing, or visualizing, it. Stamen, one of the leaders in the field of data visualization and mapping, was just recognized by the Cooper Hewitt Smithsonian Design Museum in New York with a 2017 National Design Award for Interaction Design. Stamen uses everything from animation to interactive, 3-D maps to tell their stories. These include a single day of trading on the NASDAQ, sea level rise, immigration patterns, coalition casualties in Iraq and Afghanistan, and "Facebook Flowers," a visual depiction of how an image spreads virally after George Takei posts it on Facebook.

So why are people so in love with maps right now, especially when fewer people can actually read a map? And how does Stamen find the sweet spot between information and art?

Photo by Scott L LA City Councilman Gil Cedillo has introduced a motion that would require companies seeking contracts with the City to publically disclose if they are...

Private museums showcasing contemporary art are booming. Over 300 have been built since 2000, mostly in South Korea and China.

Atlas Of Emotions, an interactive tool designed to build emotional awareness, inviting users to visualize, identify and explore five primary emotions in order to gain a...