Tyler Brûlé poses with a celebratory glass of wine at the opening party for Monocle’s new retail location and news bureau at Platform in Culver City. Photo by Frances Anderton.

In the mid-’90s, a young, injured war correspondent named Tyler Brûlé dreamed up a magazine about design, architecture, fashion and urbanism. It was named Wallpaper* (stylized with an asterisk) and it coincided with the rise of deregulated low-cost airlines, newly opened East European cities and boutique hotels. This celebration of city-hopping, global culture also gave a lot of attention to the West Coast, helping revive interest in California’s midcentury Modernism.

Wallpaper* was a huge success, Brûlé sold it and went on to create another media venture, named Monocle, harnessing under one name products, city guides, retail stores and lifestyle stories.

Despite being a global citizen, born in Canada with homes in England and Switzerland, Brûlé personally was not a fan of LA. But that’s changed.

Now he has shut his New York office and opened a storefront-come-news gathering bureau in Platform, the boutique shopping mall beside the Expo Line in Culver City. There you will find a highly curated selection of bespoke sports coats and sweaters, wool beanies, workout slacks, suitcases, body lotions and farmers’ foot creams, city guides and magazines. You could call it luxury business attire for the rugged outdoors. 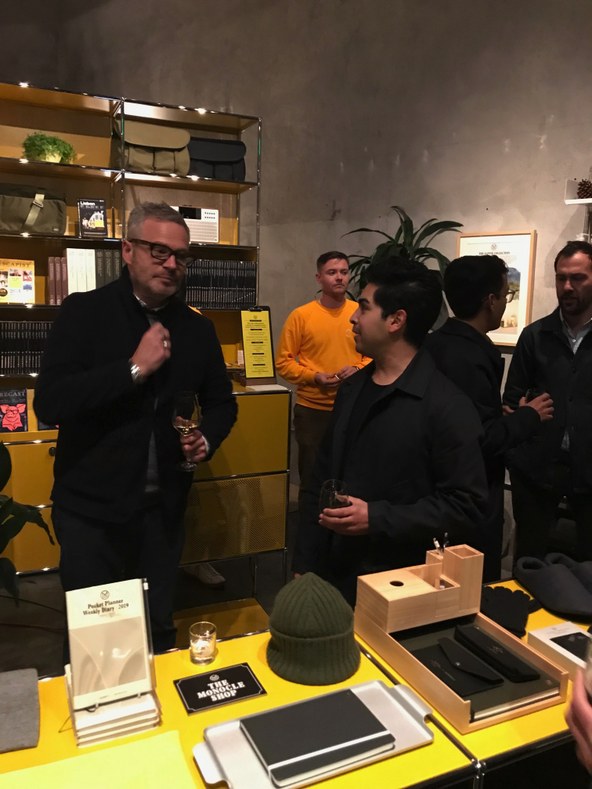 Tyler Brûlé mingles with visitors at the opening party for Monocle’s new retail location and news bureau at Platform in Culver City. Photo by Frances Anderton.

This is a return of sorts for the company because for a while they had a store at Brentwood Country Mart. DnA sat down with him to find out why Monocle made this move and why now (not only is LA evolving into a more urban, art world capital, but it’s still a place that “makes things”); how the Platform location reflects his commitment to “the world of the butcher, the baker, the candlestick maker, all of the people that make your neighborhood go around” in a culture that has shifted much of publishing and shopping online.

He also reflects on Wallpaper* and whether it played a role in creating a “notion of enforced good taste” that is homogenizing cities worldwide.

In the mid-’90s, a young, injured war correspondent named Tyler Brûlé dreamed up a magazine about design, architecture, fashion and urbanism.