For an art conservator, it's hard to say goodbye to Confederate statues The statue of Robert E. Lee, sculpted in France by Antonin Mercié and unveiled in 1890, is the crowning glory of Monument Avenue in Richmond, Virginia. This image was taken in 2013. Now the statue is spray painted with messages of protest, and the State Gov. Ralph Northam has promised to take it down. Photo credit: Martin Falbisoner / CC BY-SA

Andrew Baxter built a career preserving and protecting statues made of bronze and other metals.

He and his team at Bronze et al have worked on Henry Moore sculptures at the National Gallery in Washington, D.C., The Three Shades by Rodin at the North Carolina Museum of Art, and on an Aristide Maillol at the Virginia Museum of Fine Arts. He also works for private art collectors and he has buffed busts of dignitaries at the White House.

He has also worked on the maintenance of the statue of Robert E. Lee and other monuments to Confederate generals in Richmond, Virginia — the one-time capital of the Confederacy.

Now Baxter is watching as the statues he was commissioned to protect are being defaced or torn down. He talks to DnA about the soul-searching this has caused.

“I fully understand that those sculptures need to come down, and I would never try to defend that they should stay up. What I will say is, artistically, it's so very hard for me because academically they're really good sculptures,” he says. 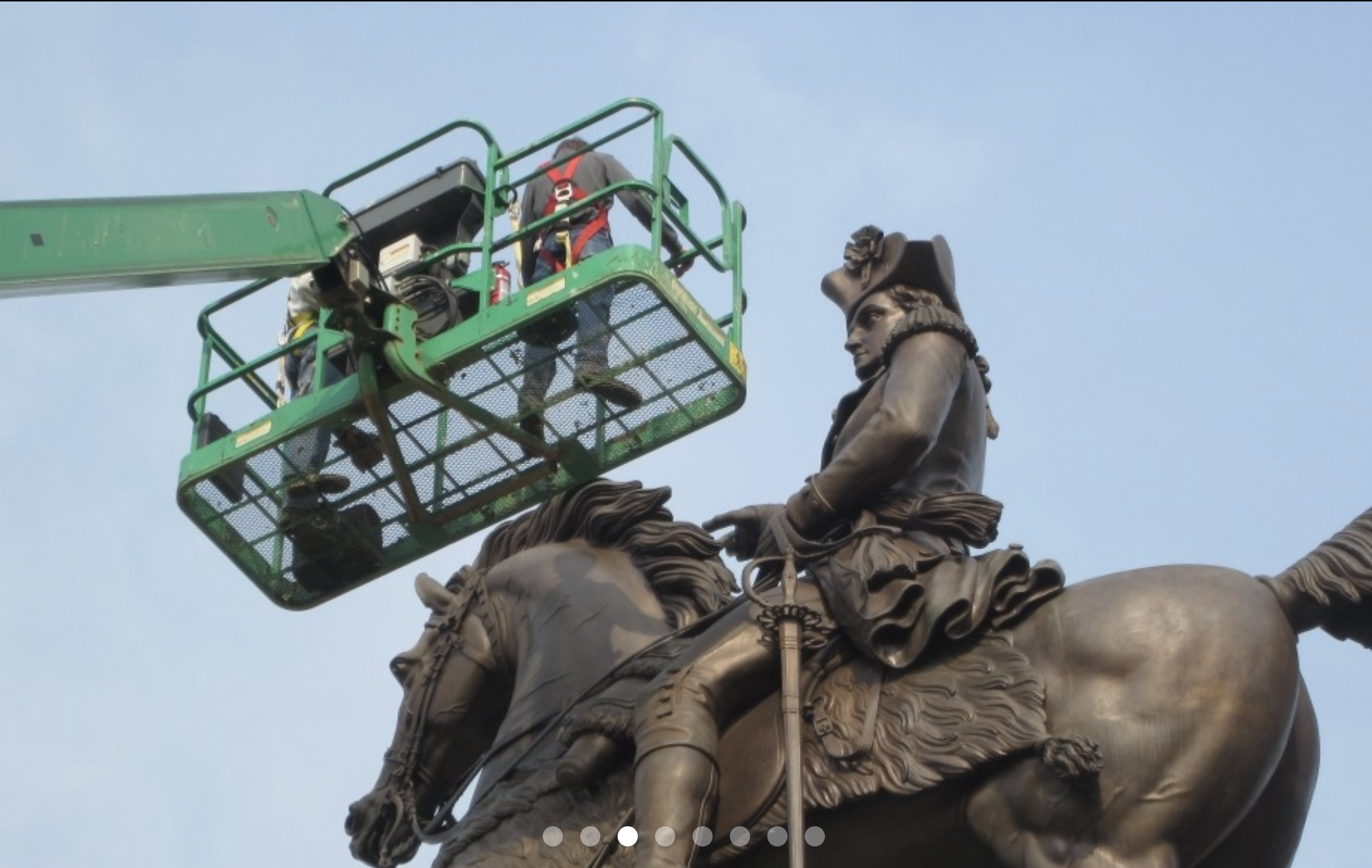 Andrew Baxter is winched into the air to work on the Washington Monument. Capital Square, Richmond, Virginia. (Photo courtesy of Bronze et al)

Baxter talks about the pride he’s taken in his work, which he long considered a craft that was unconnected to politics. He talks about the attacks he and a Black colleague have received for working on controversial monuments.

“The most yelled at I ever got was when I worked on the Christopher Columbus monument in Richmond that was recently torn down and thrown in the lake,” he recalls.

Baxter also worries about the loss in tourist revenue to Richmond if the statues go, and he wonders if disfiguring or tearing them down is the best way to alleviate the pain these symbols cause. 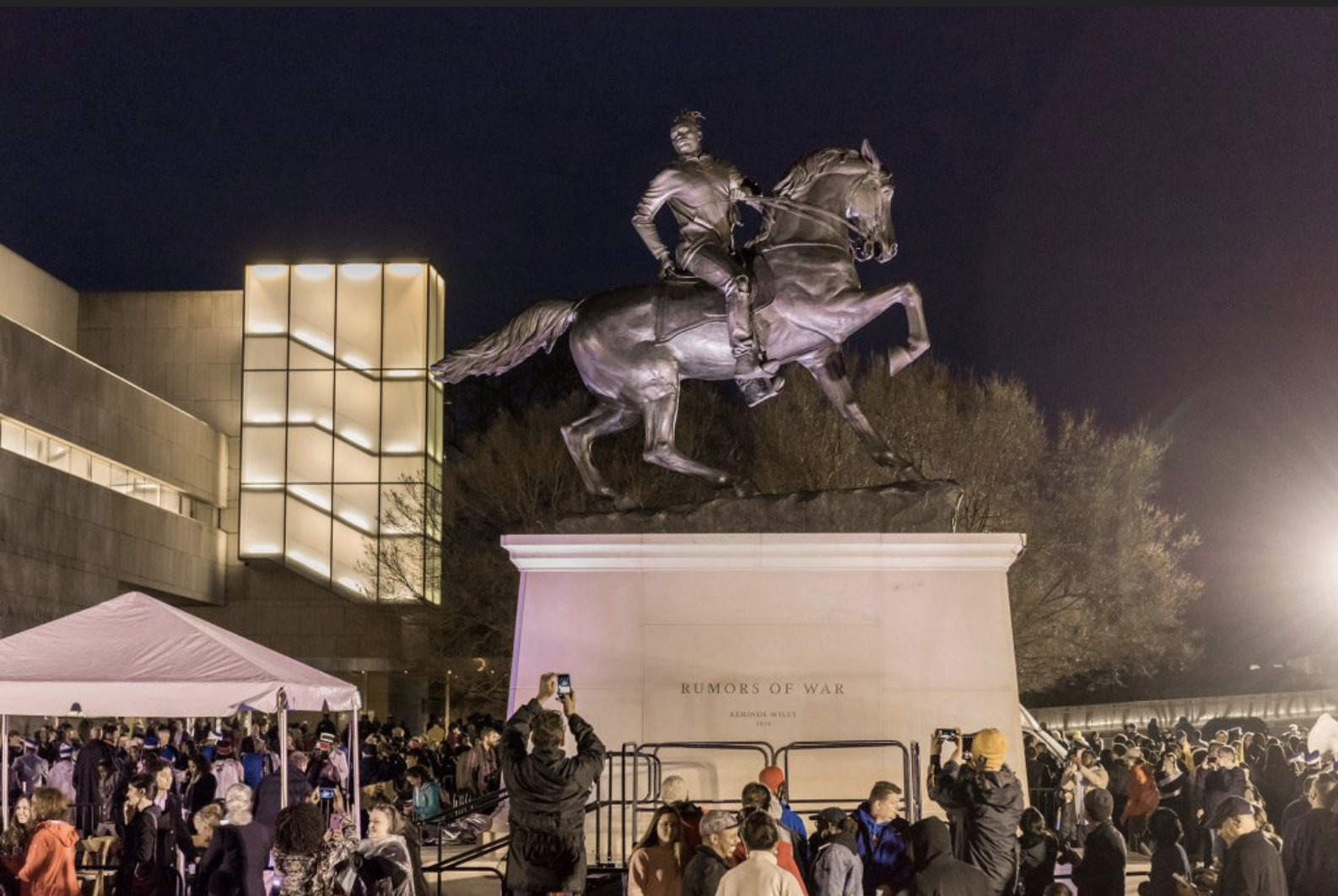 Kehinde Wiley’s Rumors of War (2019) is a contemporary response to the nearby statue of Confederate Army General J.E.B. Stuart. (Photo courtesy of Virginia Museum of Fine Arts)

He cites the example of Rumors of War, the new statue by Black artist Kehinde Wiley. It features a young Black man on horseback, in a heroic pose that echoes a statue of Confederate Army General James Ewell Brown “J.E.B.” Stuart.

The Stuart statue, created by Frederick Moynihan in 1907, is on Monument Avenue, about a mile from Wiley’s creation. Protestors have attempted to topple it, and Richmond council members have committed to have it removed.

Baxter helped install, and will maintain, Rumors of War. He worries that the stark visual comparison and conversation between the two artworks will be lost if the Stuart statue leaves its current pedestal.

Finally, he asks if the hundreds of thousands of dollars that will be spent safely removing offensive statues could be better used for putting up more sculptures that honor civil rights and other contemporary heroes. “That would be positive and benefit the image of Richmond,” he says. 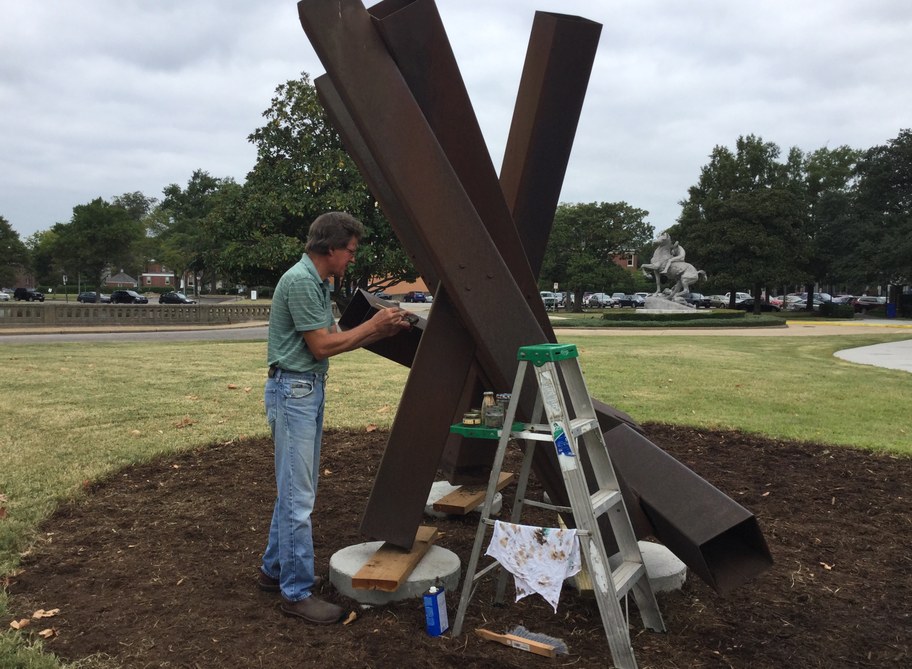