The first issue of Sunset magazine, published in May 1898. Image courtesy Stanford University

The Influence of Sunset Magazine in California and the West

Sunset magazine was launched in 1898 by the Southern Pacific Railroad to lure Easterners to California. In the late 1920s, Laurence and Ruth Lane bought it and turned it into a home design and lifestyle magazine considered the “Bible of Western living.”

The publication has changed hands and met challenges in recent years, and its archive almost ended up in the dumpster before being rescued by Stanford Library. That story is the topic of a Modernism Week panel Saturday.

DnA talked to Victoria Bernal, whose mother was a longtime member of the “Sunset family,” about the legacy of Sunset, why the West needs its own publication and why she loves stories like “how to fish with a tire iron.”

Read on for her story about the personalities and stories behind the historic magazine.

A few years ago, Time Warner, Inc. announced plans to sell Sunset’s historic Menlo Park headquarters and move the Western magazine into a smaller space. Concerned about the Sunset archives stored in one of the Cliff May-designed buildings, several conscientious staffers began to sound the alarm.

As former travel editor Peter Fish explained, “I'd worked in archives. I've done academic papers. I knew that somebody would want this Sunset archive.”

He reached out to Ben Stone, curator at Stanford Libraries, who jumped at the opportunity to save this treasure trove of Western history. Stanford Libraries already housed the personal papers of Sunset’s former owners (and Stanford graduates) Bill and Mel Lane so it was a natural fit. 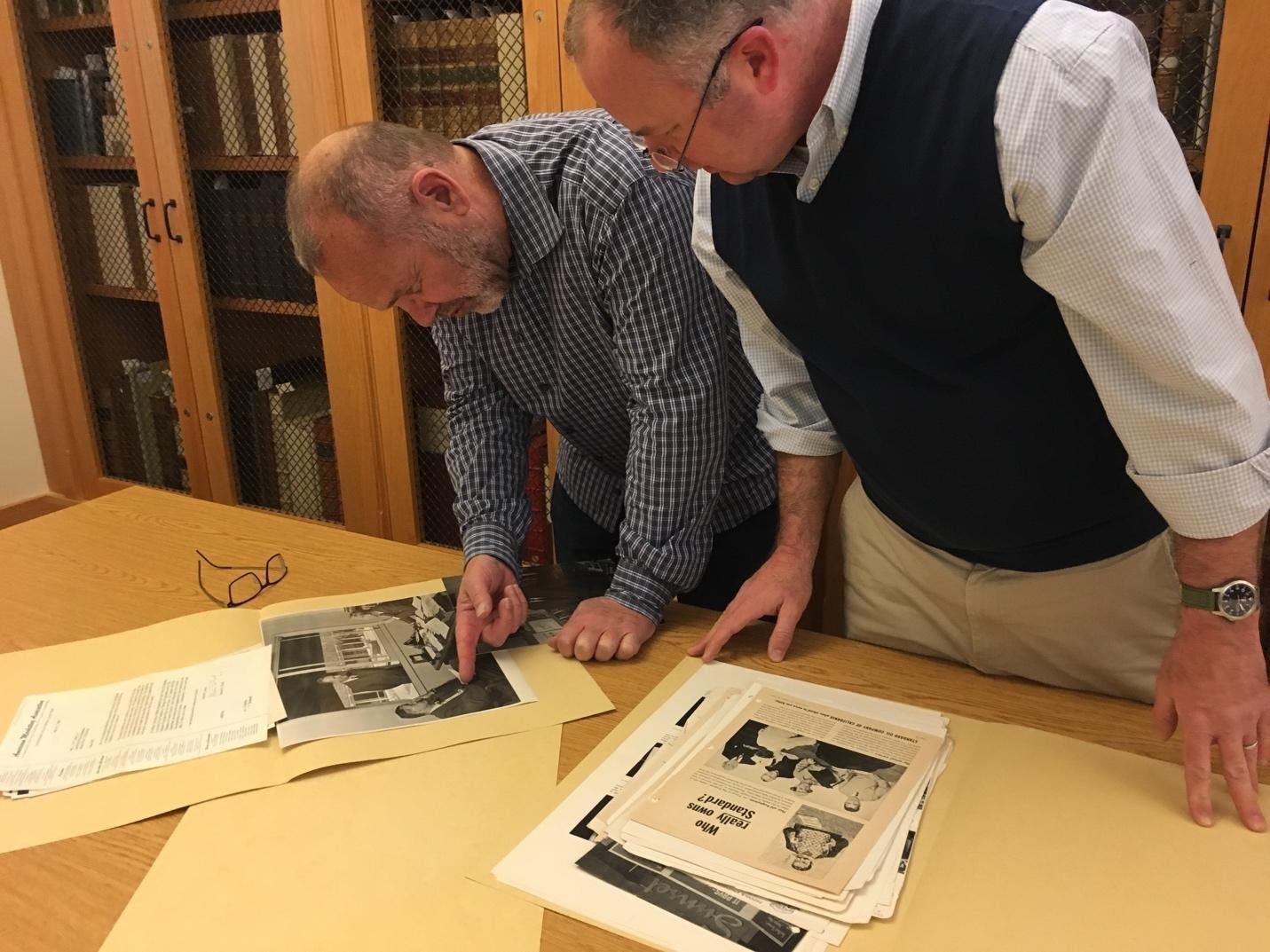 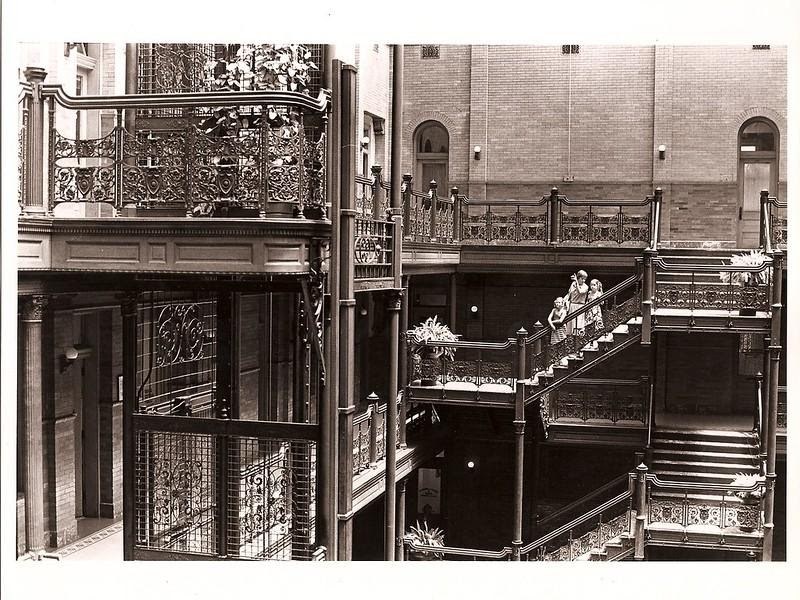 For her Sunset story about downtown Los Angeles for kids, Peggy Park Bernal and her daughter Victoria (and her friend) pose in the historic Bradbury Building. This photo was not published in the magazine. Photo by Chad Slattery, courtesy of Victoria Bernal

Since the beginning, Sunset always had a presence in Los Angeles, even if it was a one or two-person sales staff. For the Los Angeles bicentennial in 1981, Sunset Magazine placed a full-page ad in the Los Angeles Times that claimed that Sunset’s “partnership” with LA started when the Southern Pacific Railroad started Sunset magazine back in 1898. That same ad also announced that Sunset would receive the Special Bicentennial Award from Los Angeles Beautiful for its contribution to the quality of life in Los Angeles. 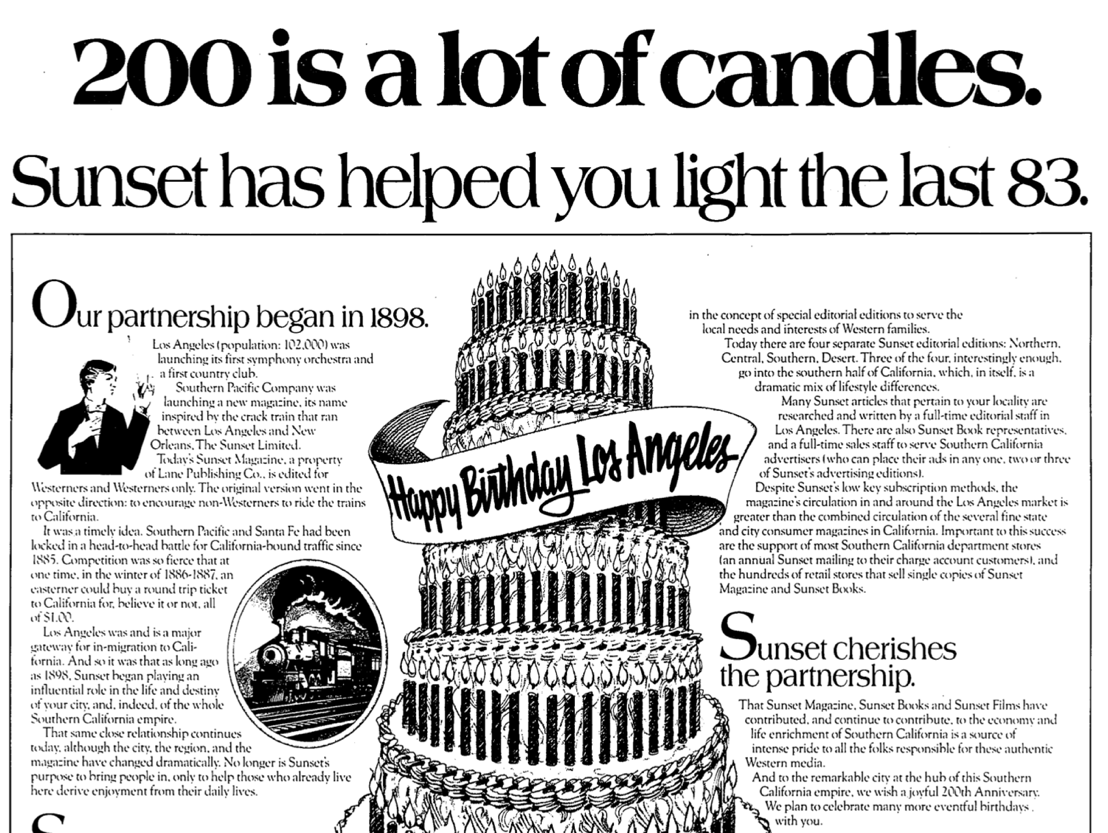 In another example, Sunset Magazine partnered with the Los Angeles County Arboretum in 1958 to open demonstration gardens “for the homes of real people.” Initially there were four different gardens to showcase the range of new and old building materials available for garden design along with local plants. The Sunset Magazine Demonstration Garden at the Arboretum lasted through the 1990s and the space is now the Arboretum’s Celebration Garden. 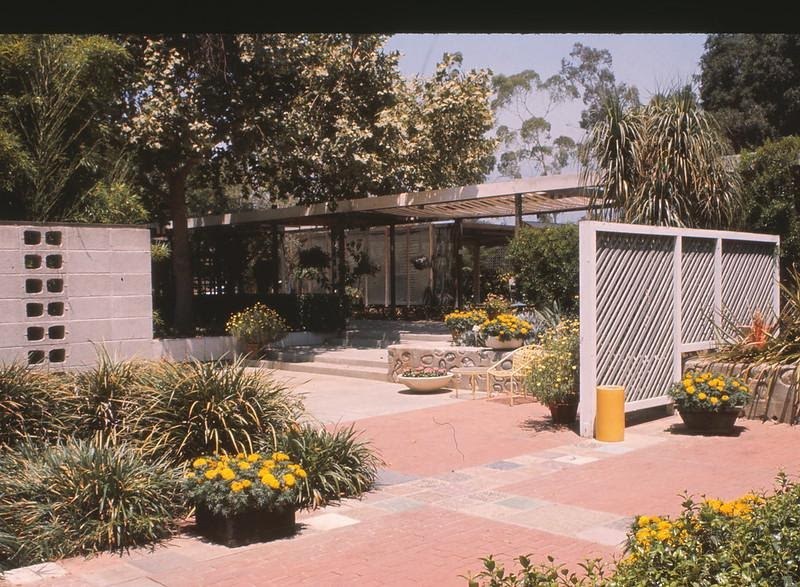 The Sunset Magazine Demonstration Garden at the Los Angeles County Arboretum. Photo by William Aplin, courtesy of the Arboretum Library

Those are just a couple of institutional ways that Sunset was active in Los Angeles. The individual staff members have so many interesting backstories to their articles published in Sunset. For instance, when the City of Los Angeles drew up plans to build a convention center in Elysian Park in the 1960s, Sunset’s Southwest editor (and L.A. native) Walter Houk subtly advocated for the preservation of the park by publishing a well-informed article about the threat and ways readers could learn more. He wrote a stronger call to action in the environmental publication Cry California under the pseudonym Harrison King, because employees were not allowed to moonlight at Sunset. Houk’s Cry California article actually made it into the 1969 Congressional Record under his fake name.

He was followed by the glamorous Jerry Di Vecchio, who worked in Sunset’s food department for 40 years. She moved down to L.A. in the 1970s and was really tied into the local food community and knew Wolfgang Puck before he was famous. As L.A.’s Southwest Editor, she also wrote for other departments. For instance, during the Los Angeles bicentennial, she featured the work of famous designer Tony Duquette who created eight golden 24-foot archangels as a gift to the City of Los Angeles. Titled “The City of Our Lady Queen of the Angels, A Bicentennial Celebrational,” the series was displayed in the Armory at Exposition Park for a year and later destroyed by fire in 1989. 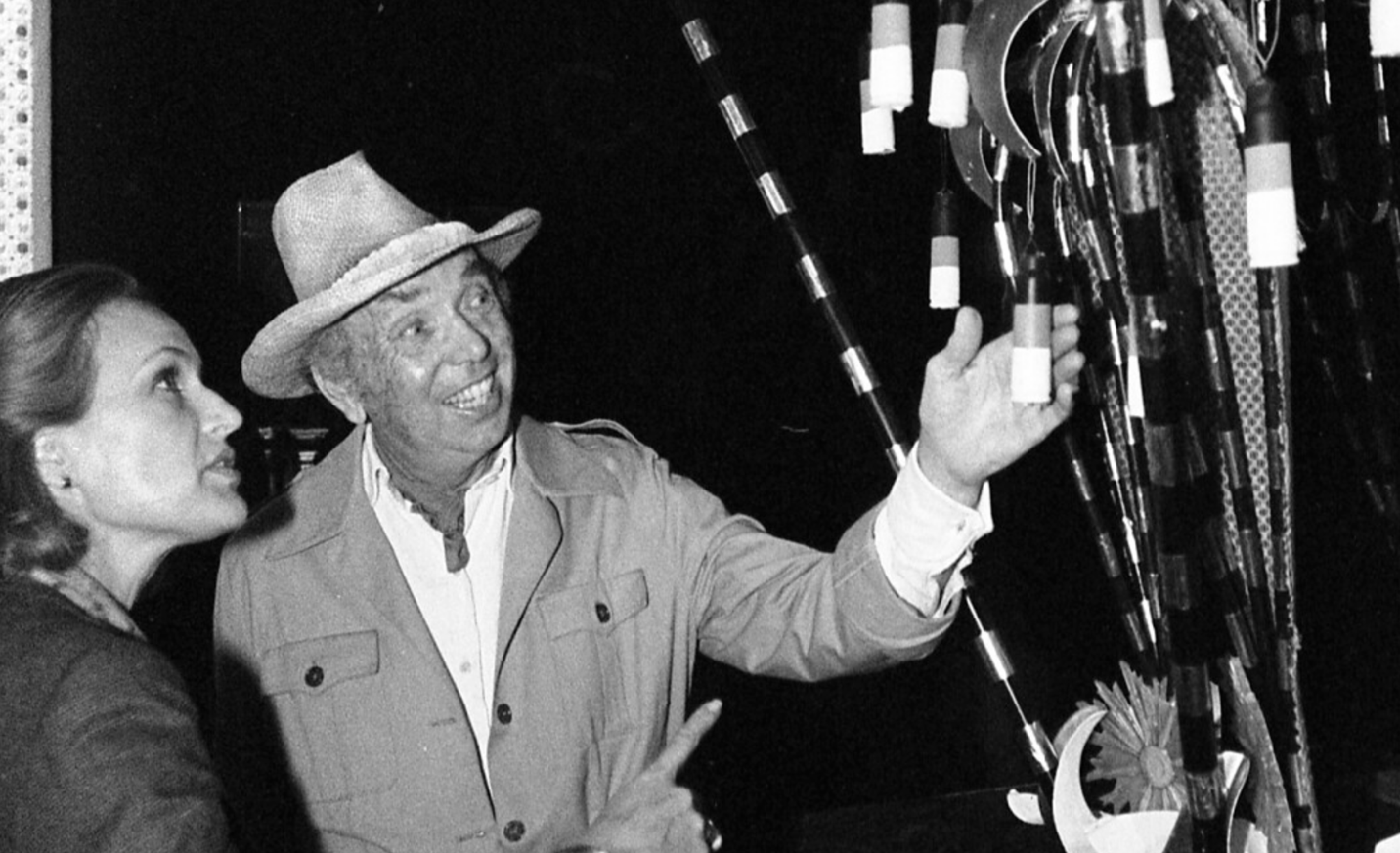 Jerry Di Vecchio and designer Tony Duquette discuss Duquette’s 1981 exhibit “The City of Our Lady Queen of the Angels, A Bicentennial Celebrational” that was located at Exposition Park. Photo by Jerry Fredrick, courtesy of Victoria Bernal

Sunset Magazine reported on four areas of Western living – travel, home, food and gardening. The staff covered these topics with such a depth, that the magazine’s archive provides a very detailed look at how owners were shaping, and shaped by, the Western landscape during the post-war era.  As Sunset’s former Senior Home Editor Dan Gregory explained, “Any geographer or any historian should be using this archive to trace the development of housing, of cooking, of concepts of travel, of the changing palette of the west…. Sunset is such a rich archive because it covered so much.” 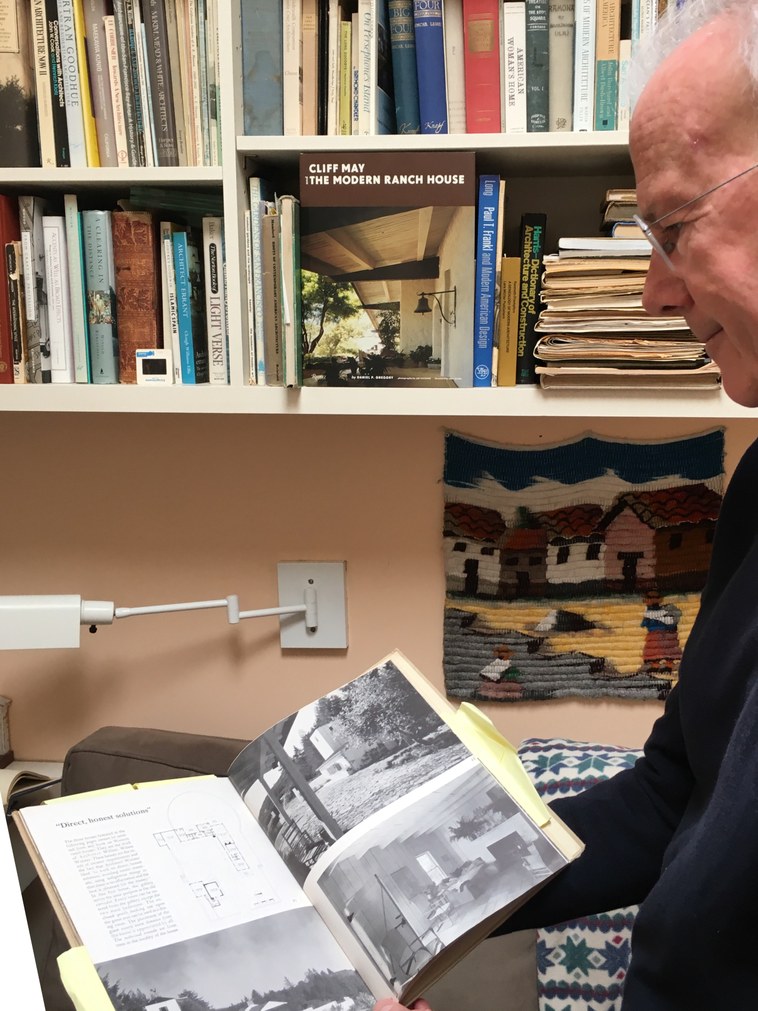 In terms of architecture, Sunset partnered with the American Institute of Architects to establish the Western Home Awards. Every two years, Sunset brought together a panel of architectural jurors —who included Charles Eames, Frank Gehry, A. Quincy Jones, Alexander Girard, Ray Kappe, Esther McCoy and Lawrence Halprin—to spotlight homes that epitomized the Western ideal. A few years back, Dan Gregory wrote about these awards for AIA California and described the process:

“The jury convenes at Sunset headquarters over two days and typically reviews
350 to 400 binders from across the West, in categories ranging from
remodelings and restorations to new houses and townhouse developments.
Discussions are usually frank and energetic as the jury evaluates the originality,
skill, functionality, comfort, and regional responsiveness of the work under
review.”

Peter Fish explained that Sunset was one of the main guides for newcomers to California and the West. He continued, “Looking at these archives lets you understand California, and the place we live now much better.” The Sunset magazine archive at Stanford Libraries is now open to researchers. Learn more about the mid-century history of Sunset and its archives at Modernism Week’s panel on February 22.

Daniel Libeskind at the ‘Edge of Order,’ Sunset Magazine, and Sound Baths

After years teaching and designing on paper, architect Daniel Libeskind built his first building at age 53. It was an instant game-changer: the Jewish Museum Berlin.

The Influence of Sunset Magazine in California and the West Sunset magazine was launched in 1898 by the Southern Pacific Railroad to lure Easterners to California. In...

Can a Sound Bath Cure Bad Sound with Good Sound?

Feeling overwhelmed by the constant barrage of noise in our lives?