This two-story ADU in a Highland Park backyard took two and a half years to build. Photo credit: Stephen Schauer

One year ago the DnA team visited the construction site of an accessory dwelling unit, or ADU, in Highland Park. It was part of an experiment by the City of LA to test what’s involved in building an ADU as a way of providing more housing across the region, at a scale that won’t disrupt neighborhoods.

Longtime building contractor Diahanne Payne described ADUs this way: “your house can have a baby. You can make the baby work.” 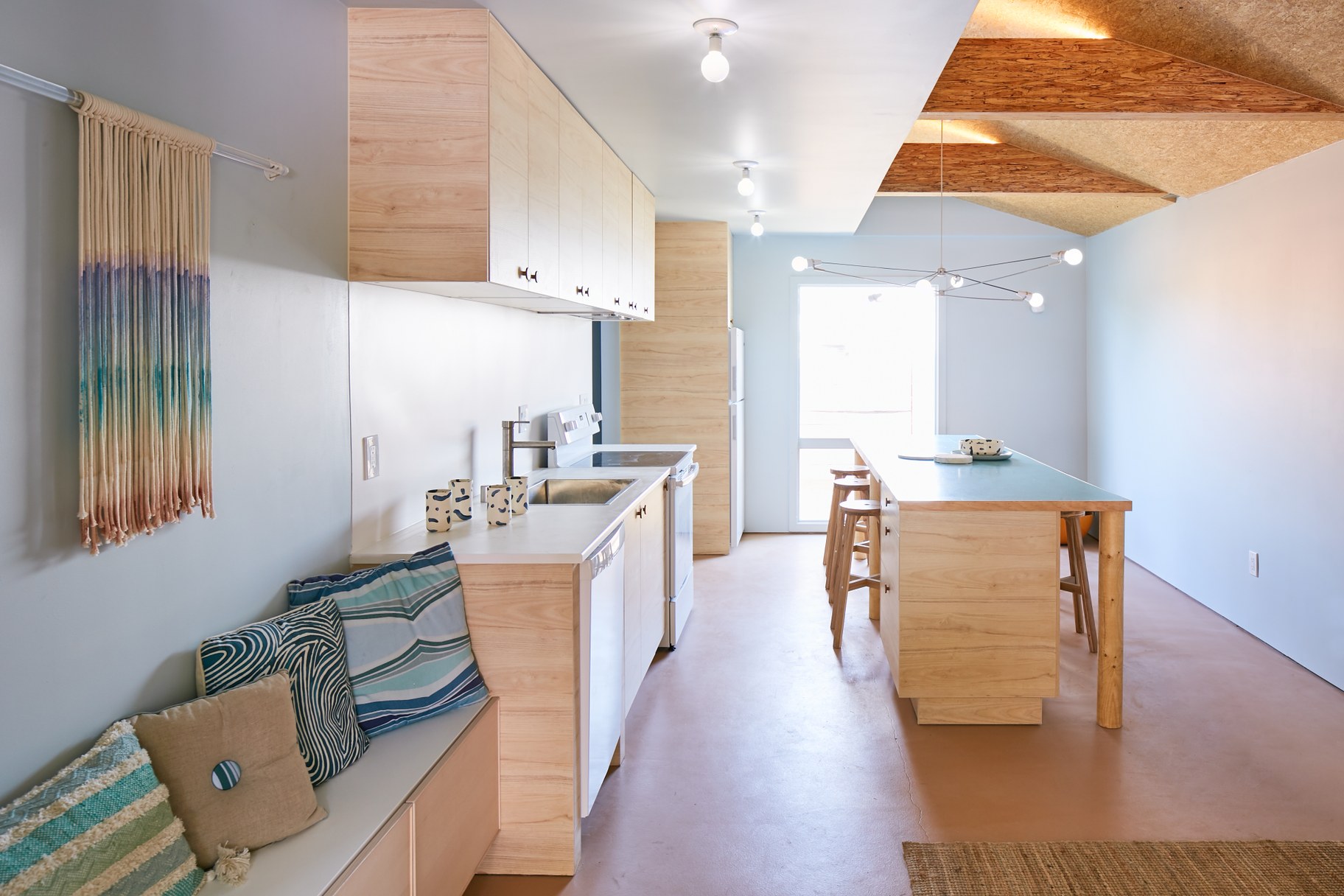 The living/dining/kitchen area on the first floor of the ADU pilot project. Photo credit: Stephen Schauer

So now the Highland Park ADU has been born. It sits in a backyard in a hilly neighborhood of bungalows dating back to early last century. The neighborhood is part of a Historic Preservation Overlay Zone, or HPOZ.

LA Mayor Eric Garcetti went to see it himself, and praised its design.

“This looks and feels like it has lived here its whole life and the life of this house. So at first look, it immediately fits into the neighborhood. Secondly, it's very substantial. I mean, it looks both innovative but in line with what made Highland Park and craftsman architecture so distinctive,” said Garcetti, adding, “this is the kind of place I could make a life.” 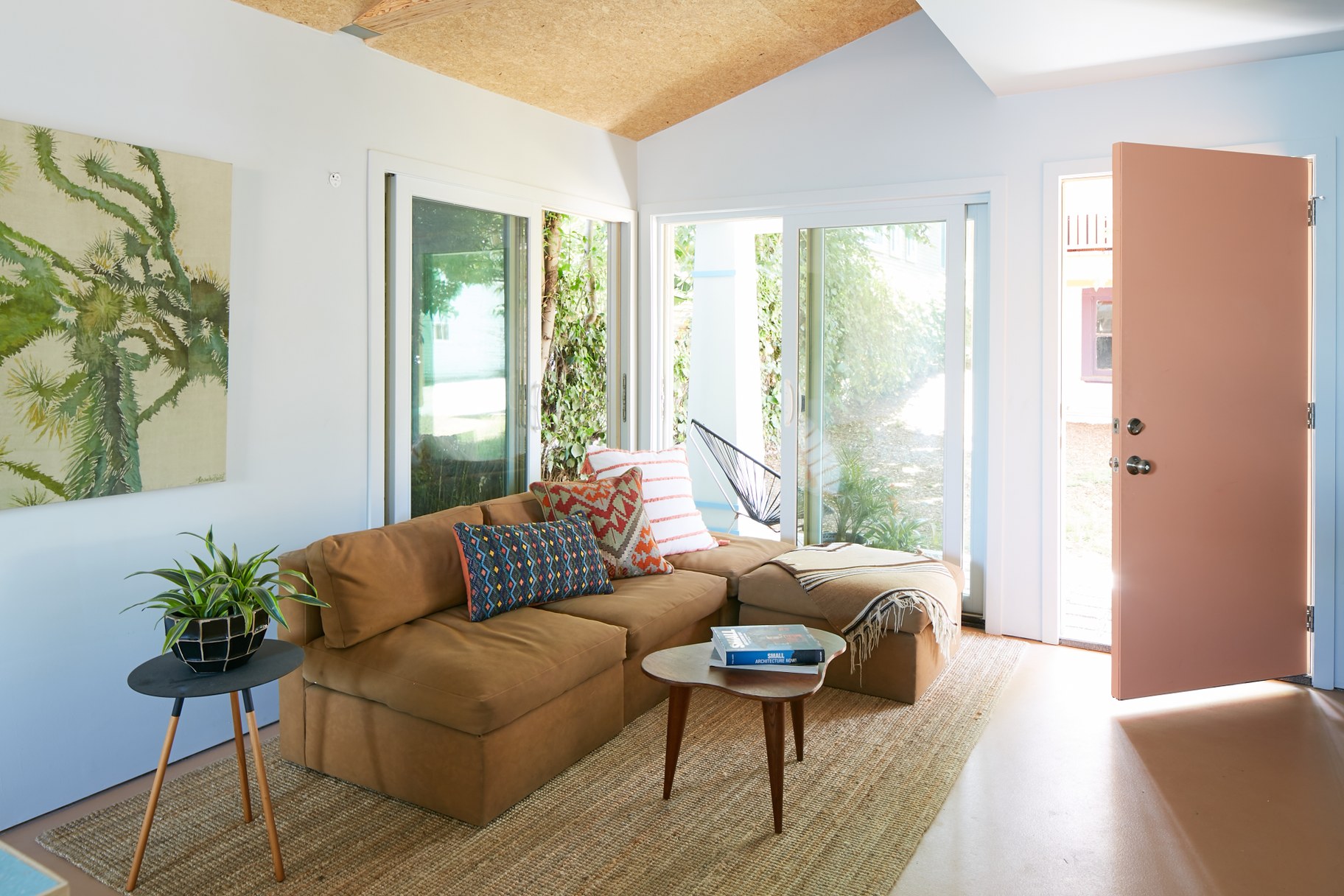 The entrance to the ADU features a muted pink and blue palette, with a natural wood ceiling. Photo credit: Stephen Schauer

“Everything here is playing with that craftsman aesthetic and playing with the idea of what is natural and what is handmade,” said architect Elizabeth Timme of LA-Más. 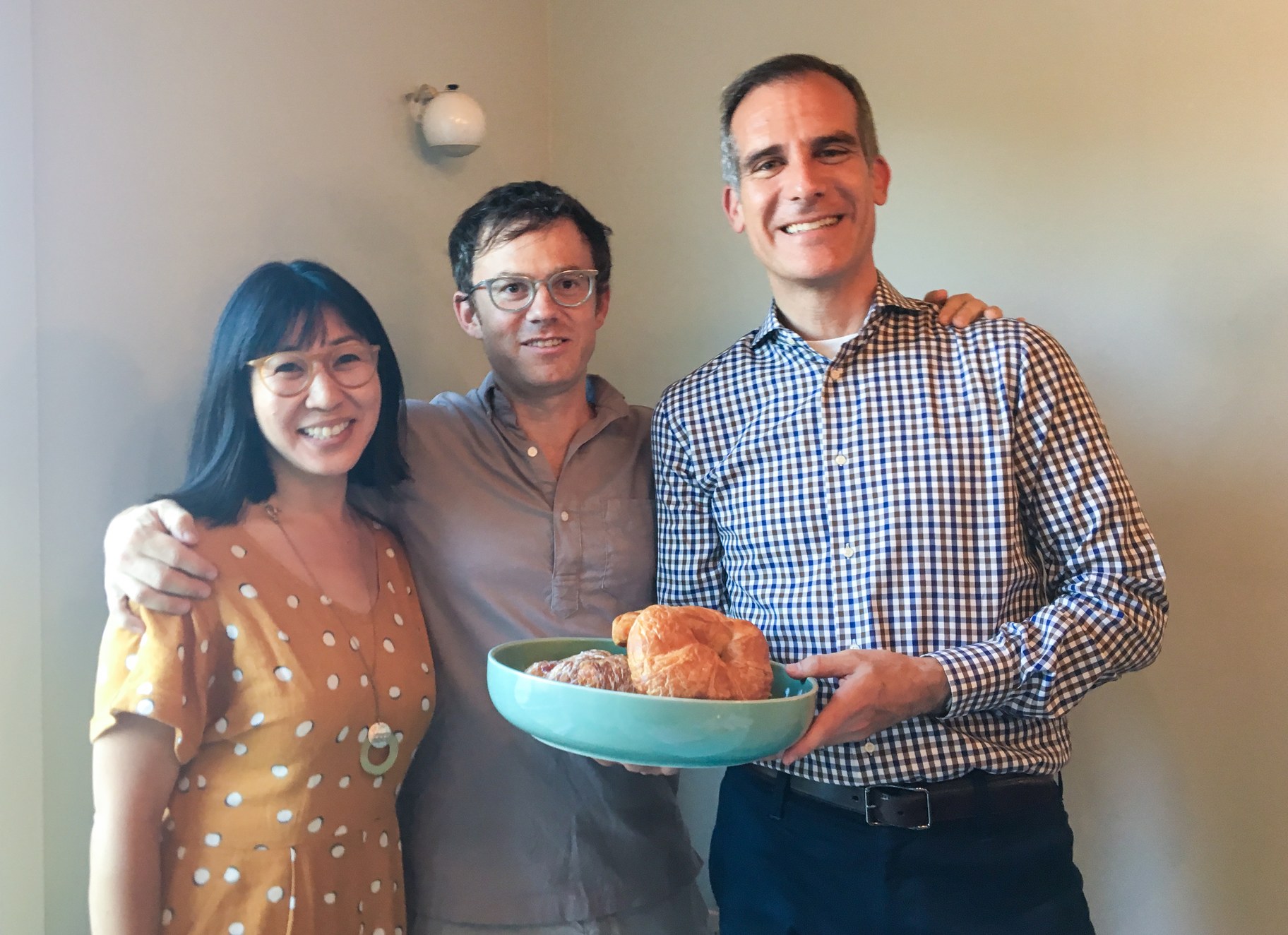 Grace Lee, Trent Wolbe and LA Mayor Eric Garcetti with a bowl of pastries at the opening party for their new ADU. Photo by Avishay Artsy/KCRW

The house is adorable, but it went through a long and painful gestation that has taught all involved some lessons about how to ease the process of building ADUs moving forward.

“It was expensive, it was time consuming, and it was really complicated,” said owner Trent Wolbe. He and his wife Grace Lee volunteered two and a half years ago to embark on this project. It would involve working with Councilman Gil Cedillo’s office, the mayor’s innovation team, the architect LA-Más, Habitat for Humanity and financiers Genesis LA.

Along the way they ran into numerous hurdles, including the challenges of building on a hillside. They also met pushback from the HPOZ which caused design changes, adding thousands in extra costs. 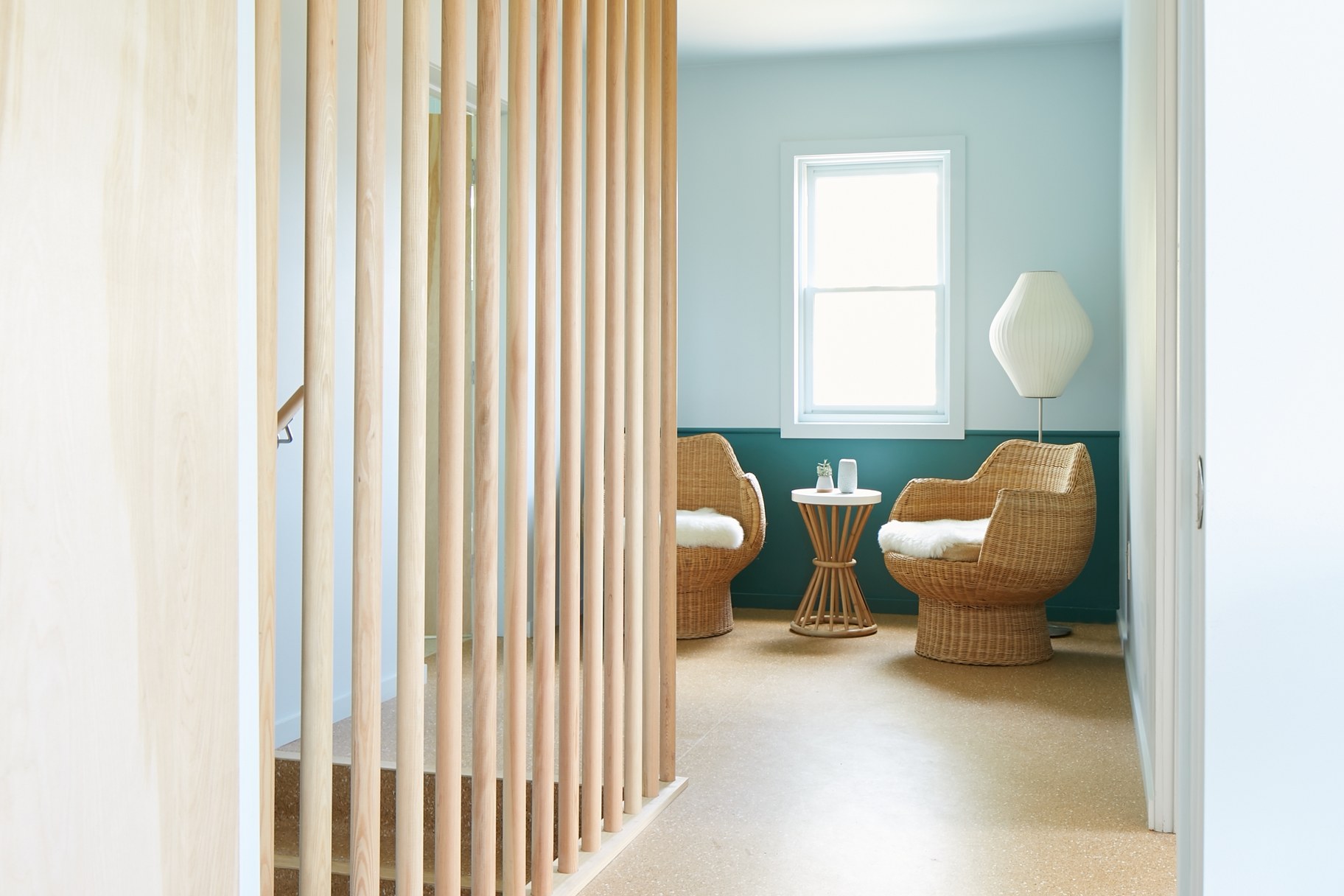 The upstairs hallway that leads to the bedrooms and bathrooms. The design is “playing with that craftsman aesthetic and playing with the idea of what is natural and what is handmade,” said architect Elizabeth Timme. Photo credit: Stephen Schauer

The project involved around fifty people from the city and the nonprofits. The end result is 1,025 square feet of liveable area plus a garage, and it will rent for $3,450 per month. Wolbe acknowledges that that’s not affordable for a lot of people, but it is market rate.

“Would I like for it to be able to have gone for a lower price and been more accessible? Yes, absolutely. There's this thing about responding to market… And there's also the portion where I need to pay back my loan, which is much larger than I thought it was going to be,” Wolbe said. 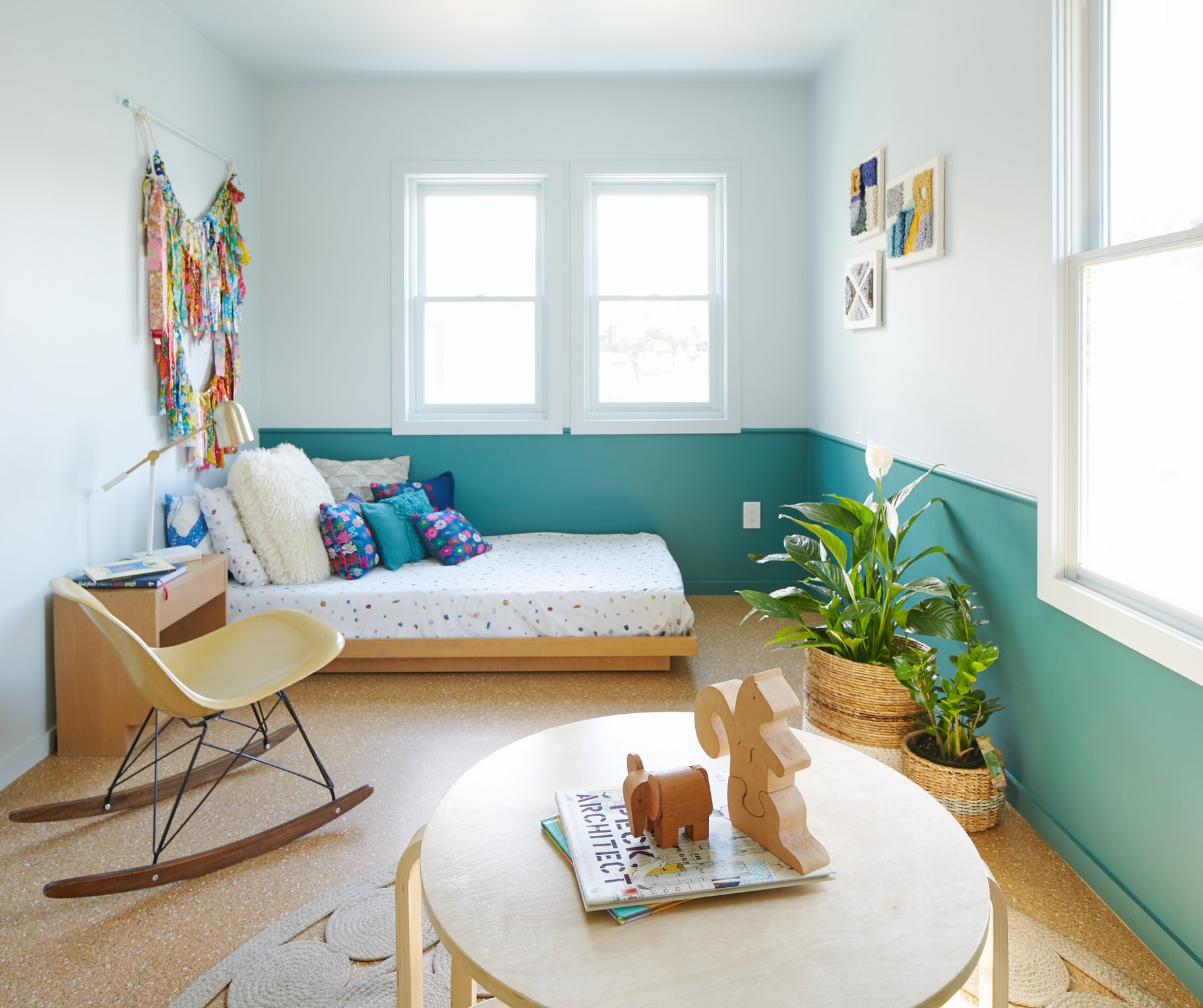 One of the ADU’s two bedrooms, designed as a children’s playroom. Photo credit: Stephen Schauer

One of the main takeaways from this pilot project has to do with financing the construction of backyard homes, in a way that makes them scalable across the Southland.

The city worked with Genesis LA to devise a loan for homeowners to building ADUs. That financing tool “has been looked at and will be replicated by other banks here in the city, which is exactly what the city wanted,” said Amanda Daflos, LA’s chief innovation officer. 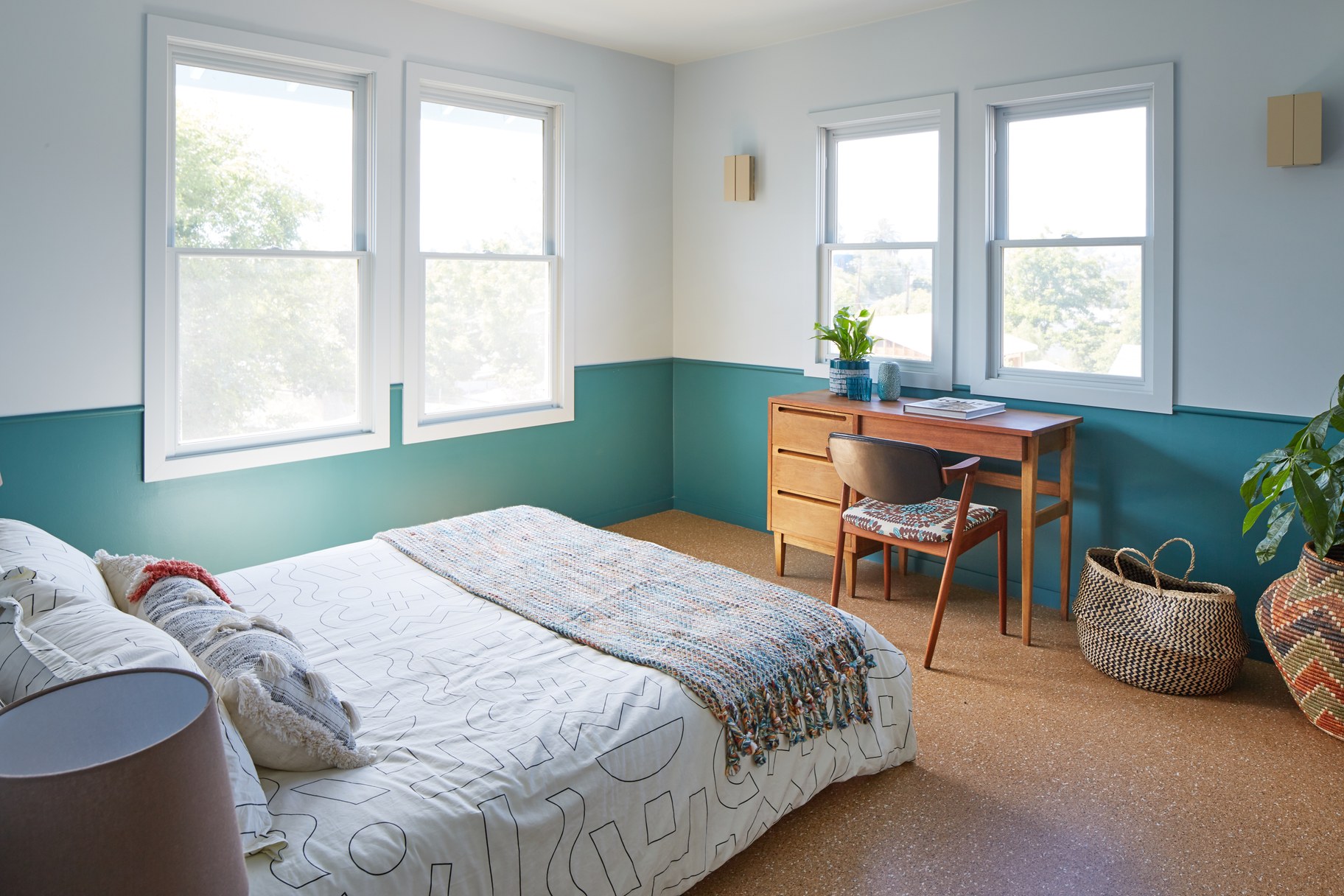 So at the end of the day, how much can a project like this actually contribute to the housing supply in Los Angeles?

“We're gonna have to have things at all ends of the spectrum, because we just need housing supply at all levels,” Garcetti said. “This was an experiment to see what red tape do we run into, how can we get financing, how do people manage design.” 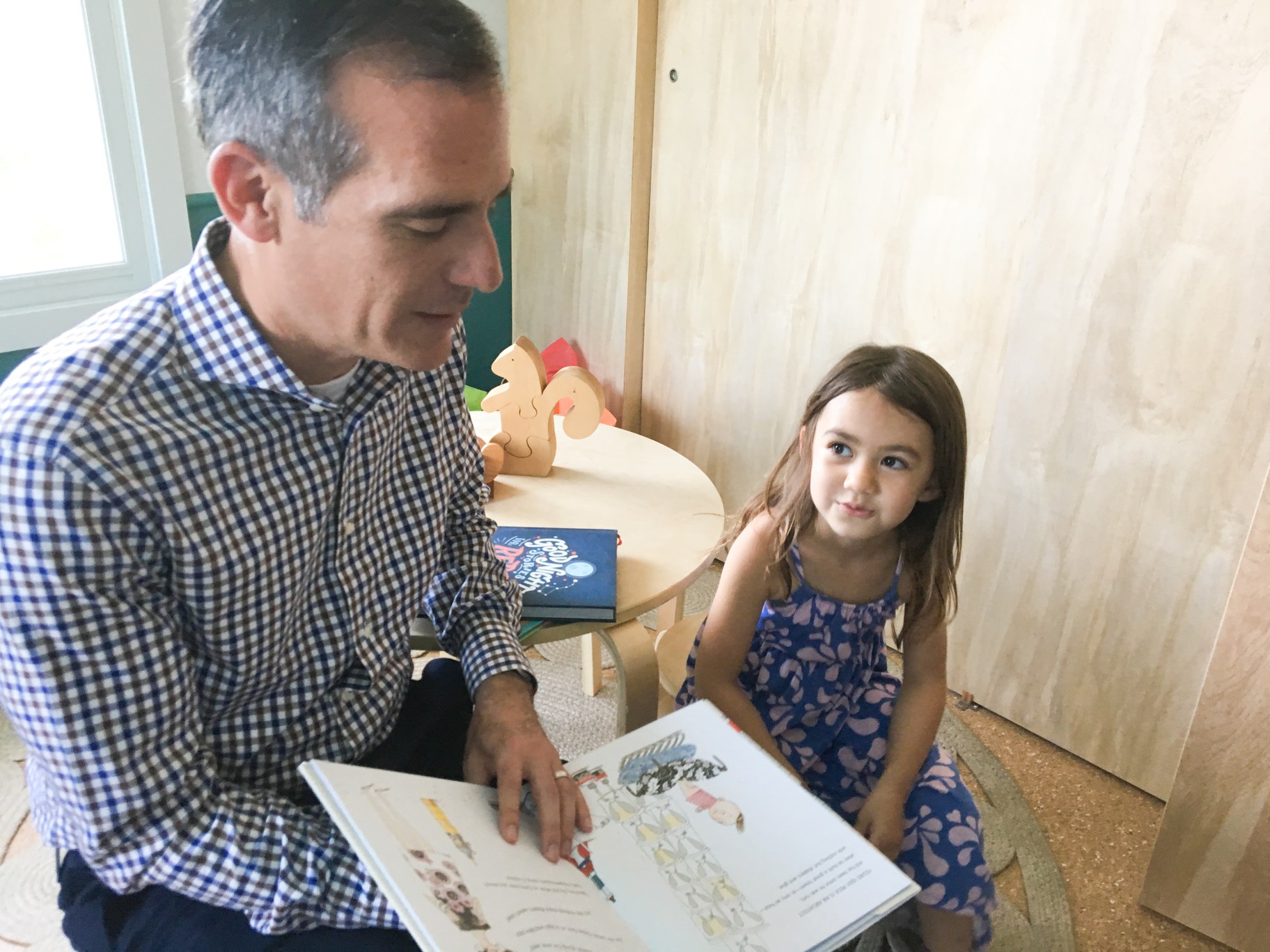 Another lesson from building this ADU? Some restrictions on housing designs, especially in HPOZs, need to be relaxed.

“Los Angeles loves its neighborhoods. We love the feel of our neighborhoods but we also are looking to the future and we want to solve this housing crisis. That doesn't mean we need to obliterate all zoning but it also means we can't just keep the status quo,” Garcetti said. 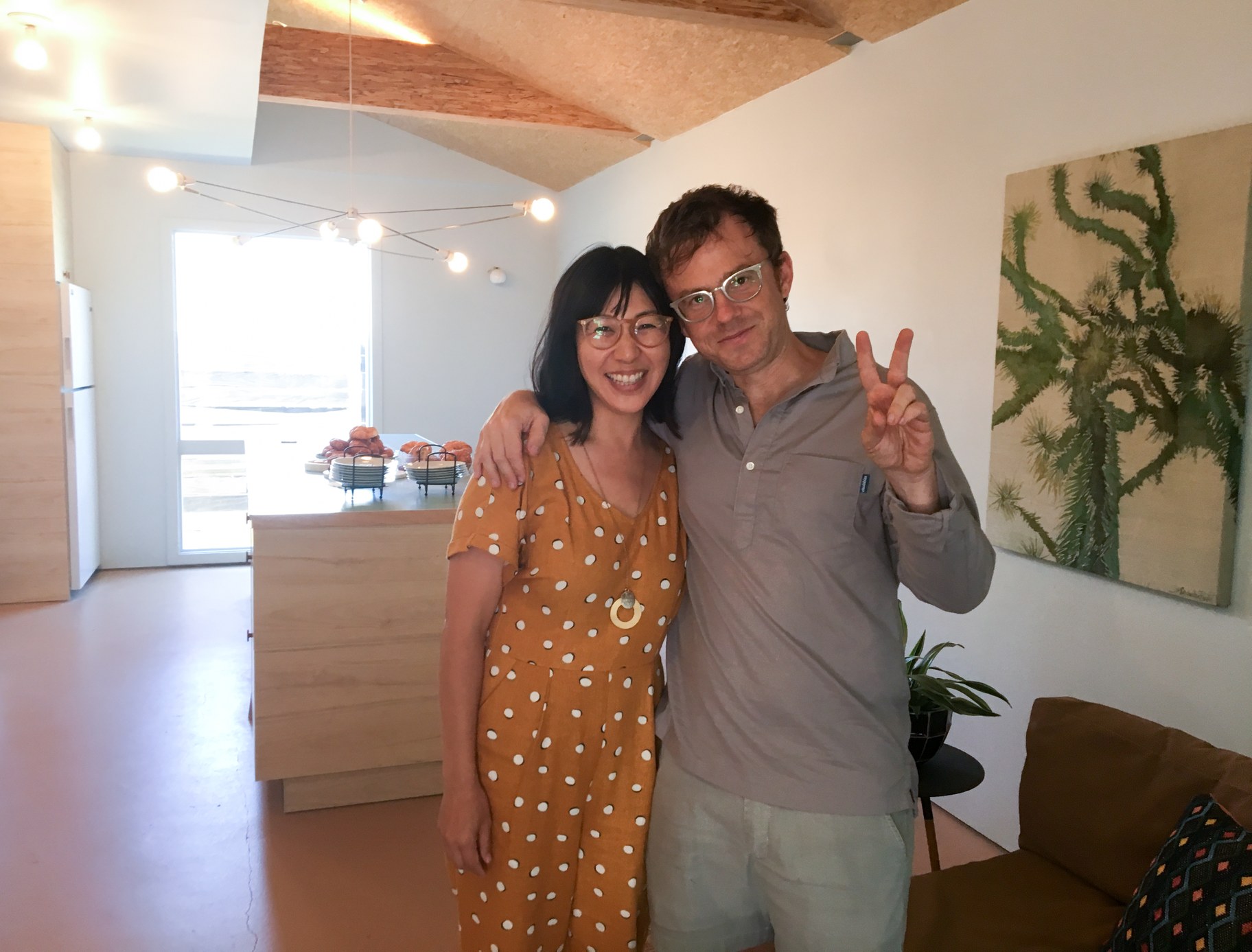 Grace Lee and Trent Wolbe in the ADU’s living room. After two and a half years, they are relieved that the home is finally built. Photo by Avishay Artsy/KCRW

What better way to enjoy a summer night in LA than at Dodger Stadium? Now the owners want it to get even better. Last week Dodgers president Stan Kasten announced a...

One year ago the DnA team visited the construction site of an accessory dwelling unit, or ADU, in Highland Park.