But this location -- to many visitors an innocent and charming example of LA’s love of stage set architecture -- did not play so well with Los Angeles Times reporter Frank Shyong.

He tells DnA, “the temple is -- in the Japanese context -- a place where people think about their relatives and have quiet reflective moments. And so when we in America take these parts of these cultures, we should also think about what their contexts were.” Shyong recently published a fascinating meditation on the “authenticity” of Yamashiro, which is on the National Register of Historic Places.

He asked whether it should be considered within the framework of “cultural appropriation” and he called it, quote, “an inauthentic fantasy of Japanese culture that has generated profits exclusively for non-Japanese people.” He added that longtime businesses in Little Tokyo meanwhile face displacement.

As part of DnA’s series on identity in design we discussed these arguments -- with Frank Shyong; Eve Epstein, Hunker VP of Content; and Eric Avila, historian and professor at UCLA.

We asked each of them, how should we evaluate objects and buildings that mean different things to different viewers?

Epstein says she feels a personal connection to the hybrid building, due to her own heritage as child of a Japanese mother and Jewish-American father.

On one hand she says she understands the concerns of cultural appropriation, whether in architecture, fashion or movie casting; on the other she says there is room for “camp” and for keeping a sense of humor when appropriate.

“The truth is that America is always interpreting somebody else's thing. We were bound to be getting stuff wrong from the start.” She adds, “I don't think there's anybody who comes to Yamashiro and doesn't come away having a pretty good feeling about Japanese architecture and culture.”

But should the National Register reflect the hidden, sometimes darker aspects to a building?

Yes, says Avila, and points out that at the time Yamashiro was being built, “Japanese Americans and Japanese immigrants were facing a wave of hostility that surfaced through a variety of laws that were passed to restrict Japanese immigration and also to prohibit land ownership among Japanese people in California.”

How about paying more attention, he asks, to buildings such as “the 100 year old French hospital that was Chinatown's only hospital” and has a “fascinating history of transitioning from French to Chinese to pan-Asian as Chinatown and that surrounding area has changed?”

Or what about the restaurant in Chinatown where “the first dim sum was served? I think if we considered Asian American or Chinese American food history a part of our history, then that’s something worth preserving too.” 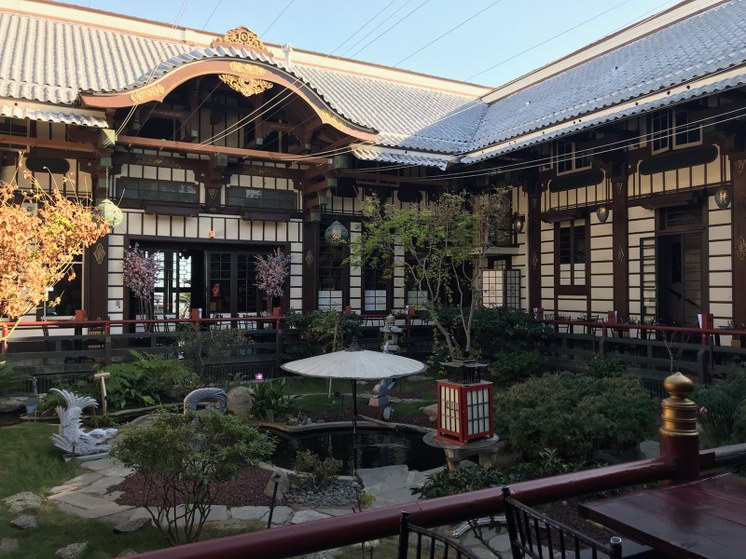 A view of Yamashiro’s interior courtyard. Photo by Frances Anderton.

Every two years the global architecture community descends on Venice, Italy to get a taste of what’s current and future in architecture.