What does Los Angeles in 2019 mean to you? The LA County Arts Commission would like to know.

DnA producer Avishay Artsy has been looking into the strange story of a forgotten monument to a forgotten event that is being revamped for a changing downtown. 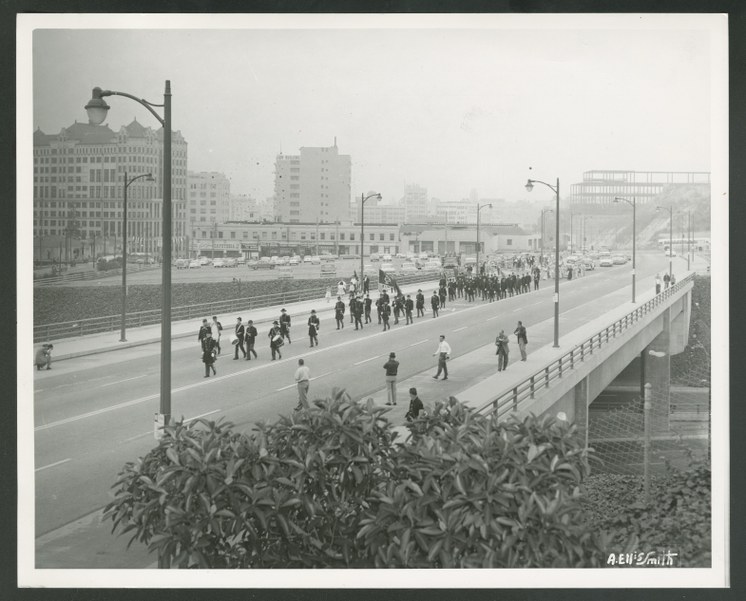 The Fort Moore Pioneer Memorial is in a hard-to-reach location, on North Hill Street between downtown and Chinatown, and just north of the Hollywood Freeway. It is dedicated to the Mormon Battalion and the New York Volunteer American military forces. On July 4th, 1847, they first raised the American flag over the recently-conquered California territory.

The Mormons pushed to build it, specifically a woman named May Belle Davis. Her great grandfather was part of that Mormon battalion. She then took it upon herself to commemorate those men. She was in Utah at the time.

“She was a suffragette. Hearing Susan B. Anthony, she became a legislator in the state of Utah and she brought the idea of a monument to the governor of the state of Utah,” said Tom Andersen, the grandson of May Belle Davis.

“It took almost 25 years. It was slowed down because of World War One but they built a monument on the capitol grounds. She then moved to Los Angeles and spent another 25 years bringing to pass this memorial that we have downtown to the pioneers.”

Davis met with the LA city planning commission, with county leaders, the Board of Education and the Department of Water and Power, and held fundraisers to get the thing built.

One thing that helped her cause is that she knew a retaining wall needed to be built to hold up the hillside after excavating for the freeways. So she pushed for it to be built there. 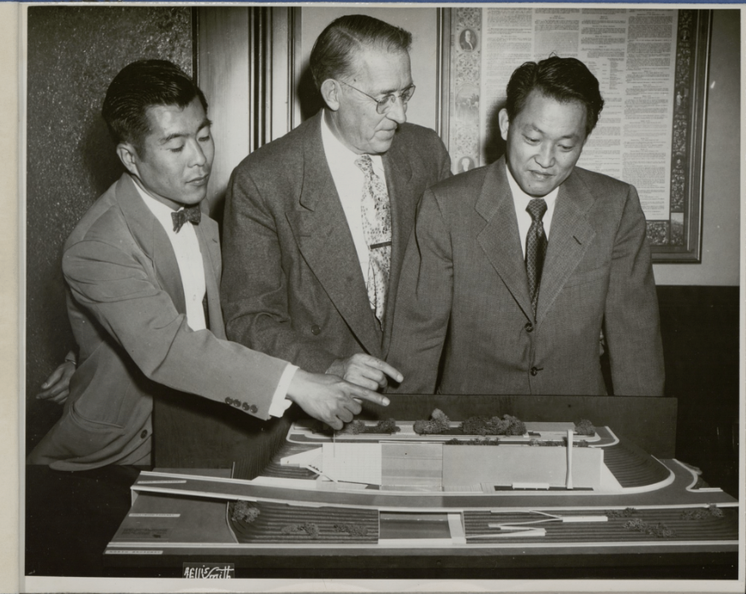 “Following the announcement of a competition for this purpose the creative embers in the minds of the architects of Los Angeles County began to glow,” Davis recounts in a pamphlet detailing the construction of the memorial.

There were 71 proposals. A team was selected of two Japanese-American architects, Kazumi Adachi and Dike Nagano. Both studied at USC and went on to design Modernist homes in LA. Interestingly, when the Japanese-Americans were forcibly relocated to internment camps, Nagano worked as a “supervising architect” at the notorious Manzanar camp. He also designed the Crenshaw Square Shopping Center. Adachi helped design the Japanese American Community and Cultural Center.

It’s an odd place, in that it feels very isolated from its surroundings. There’s nowhere to park nearby and there’s no shade, so it’s often empty. There’s also no historic plaque to explain the significance of the site. There have also been problems with trash and graffiti.

What you’ll see is a sunken plaza with an 80-foot-wide waterfall with colorful tiles behind the waterfall. The waterfall was shut off in 1977 because of a drought.

There’s a low gilded wall, and a terracotta bas relief installation designed by Henry Kreis, a renowned German sculptor, showing a scene of soldiers raising a flag as a commander watches on his horse. Three smaller scenes show a farmer, representing the the Spanish ranchos, a locomotive that represents the American settlers of the west, and then there’s a family standing in front of a water and power plant (remember that the Department of Water and Power helped pay for the memorial.)

There’s also a 68-foot-tall triumphal pylon with a sculpted eagle bas relief and an inscription dedicated to the “brave men and women” who played a role in “extending the frontiers” of the United States westward. 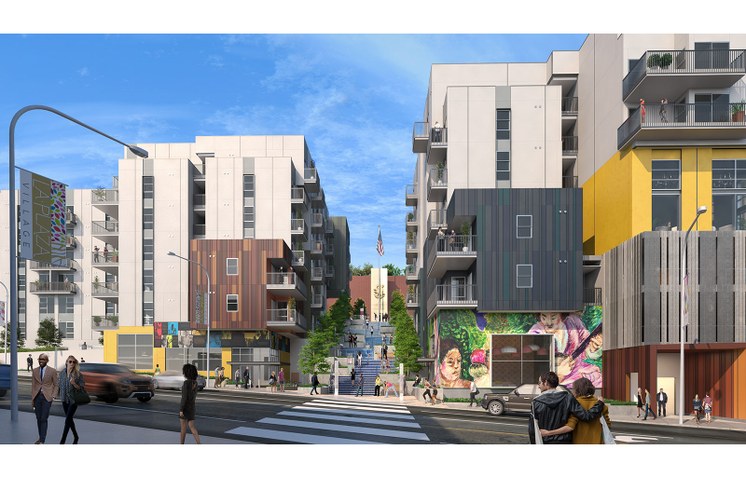 LA Plaza Village is under construction across the street from the Fort Moore Pioneer memorial. It will be a mixed-use development with housing, restaurants and bars, cultural programming and a paseo that will connect Olvera Street to Fort Moore. Rendering courtesy of Johnson Fain

The memorial itself is not much of a showstopper. But the County knows the memorial has fallen into disrepair. And most importantly the area is changing and will bring the memorial back into public view. A new mixed use development called La Plaza Village, designed by the firm Johnson Fain, is being built across the street and there will be a paseo that will connect the Memorial at one end to Olvera Street at the other.

“Fundamentally this is a public space and it belongs to the people of Los Angeles County and it should be a space that's used. And it should be a dynamic space,” said Clare Haggerty, the former Deputy Director of Collections at the LA County Arts Commission.

When the memorial was dedicated on July 3, 1958, they installed a time capsule. A couple years ago as restoration was underway, they knew from the architectural plans that there was a space for the time capsule at the base of the flagpole. They found a metal box made by hand out of copper sheeting, about the size of a large shoebox, soldered shut. 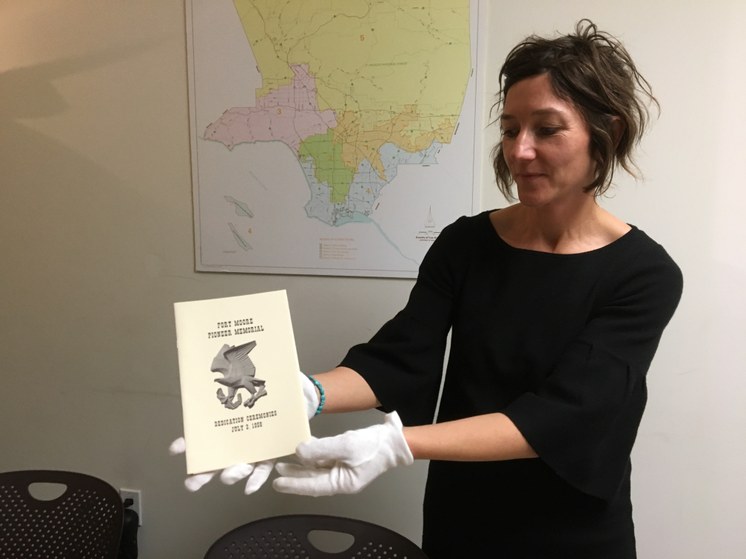 Clare Haggerty, the former Deputy Director of Collections at the LA County Arts Commission, flips through some of the objects found in the 1957 time capsule. Photo by Avishay Artsy/KCRW

What was inside was papers and photographs, mostly related to the memorial itself. They were laminated and well-preserved after 60 years. There are county records and newspaper articles, a brochure from the dedication ceremony, the notes of Supervisor John Anson Ford’s speech at the dedication, and a manuscript of May Belle Davis’s entire account of how she get the memorial built. There were also photographs of the architects and the groundbreaking and the building of the monument. The Mormons have already digitized all of this and are working on making it accessible to the public.

Now the County wants to put in a new time capsule. And they’ve called for the public to submit ideas for what should go inside. The LA County Arts Commission is taking suggestions until May 6.

“You don't need to be an artist or a professional archivist in any way, shape or form,” said Kristin Sakoda, executive director of the LA County Arts Commission. “So students, teachers, school groups, families, just interested folks, community members: we’re asking that they submit proposal ideas. And we really have three categories. So reflections on you or your community, our current social, cultural, economic, environmental, or political life. What is your Los Angeles? Representations of this current time period. So what's specific about 2019? What's remarkable about now or what do you what your future self to know about Los Angeles of right now? And then the third is, essentially, if you have a connection to Fort Moore specifically or a feeling about Fort Moore Pioneer Memorial or its history.”

The county will go through the submissions in May and June and install a new time capsule on July 3rd at a rededication ceremony. They want stories, poems, photographs, drawings, objects, and so on, that will be a window into this time, 2019 – more personal than the 1957 time capsule which contained more organizational and bureaucratic records. 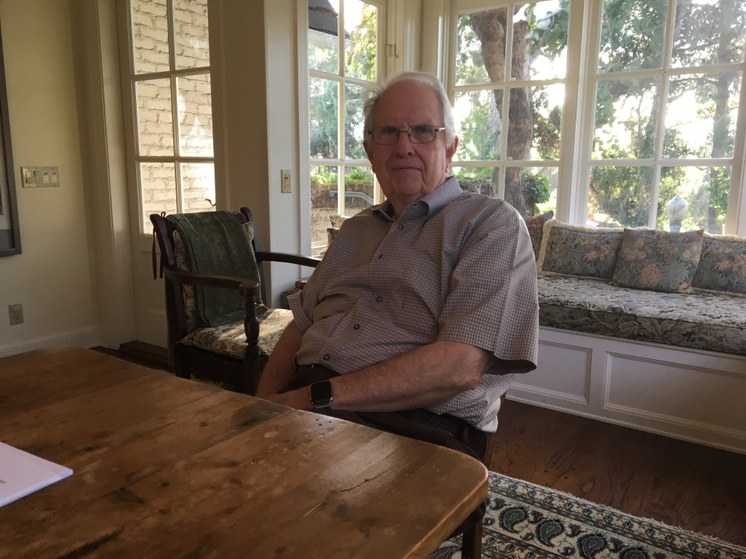 Tom Andersen, the grandson of May Belle Davis, at his home in West LA. Photo by Avishay Artsy/KCRW

Another part of what’s going on here is an acknowledgment that the Fort Moore Pioneer Memorial represents just one view of a broader picture. Mexico ceded Alto California to the U.S. in 1848, which was the year after the Mormon Battalion raised the U.S. flag at Fort Moore. So some do see this memorial as a celebration of the U.S. conquest of the West. But Tom Andersen, the grandson of May Belle Davis, says this rededication and the new time capsule gives us a chance to add more context to the memorial.

“The heart and essence of it is to be transparent and open, show a broad history but say let's look to the future because that's what we need. We don't need to get too wrapped up in our differences of opinion of how we cast the past,” Andersen said.

Feminist design at The Wing; A Time Capsule for 2019 LA

Inside The Wing, a pastel haven for feminists

The Wing is the latest shared workspace to join a growing crowd in LA.

What does Los Angeles in 2019 mean to you? The LA County Arts Commission would like to know.