The team behind Cohaus transformed this large Koreatown house into 15 individual bedrooms and bathrooms for residents. Photo by Amy Ta/KCRW

Coliving is a fast-growing housing type in Los Angeles, offering under one roof multiple units (bedroom and bath) along with common areas like a shared kitchen, dining area and living room. Tenants trade private living space for lower rent prices, but gain a sense of community as well.

Can this model be applied to single family homes? Architect and developer David Chun has bought houses on streets zoned R1, and has subdivided them into coliving ventures, first in Highland Park, now in Koreatown, and coming soon to West LA.

DnA visited the Koreatown location and spoke to Cohaus management and “members” (not, legally, tenants) about the benefits and drawbacks of coliving.

We hear from a neighbor who is displeased with the project and its impact on this residential neighborhood. We ask if this is a neat solution to LA’s housing needs? And what is the meaning of family? 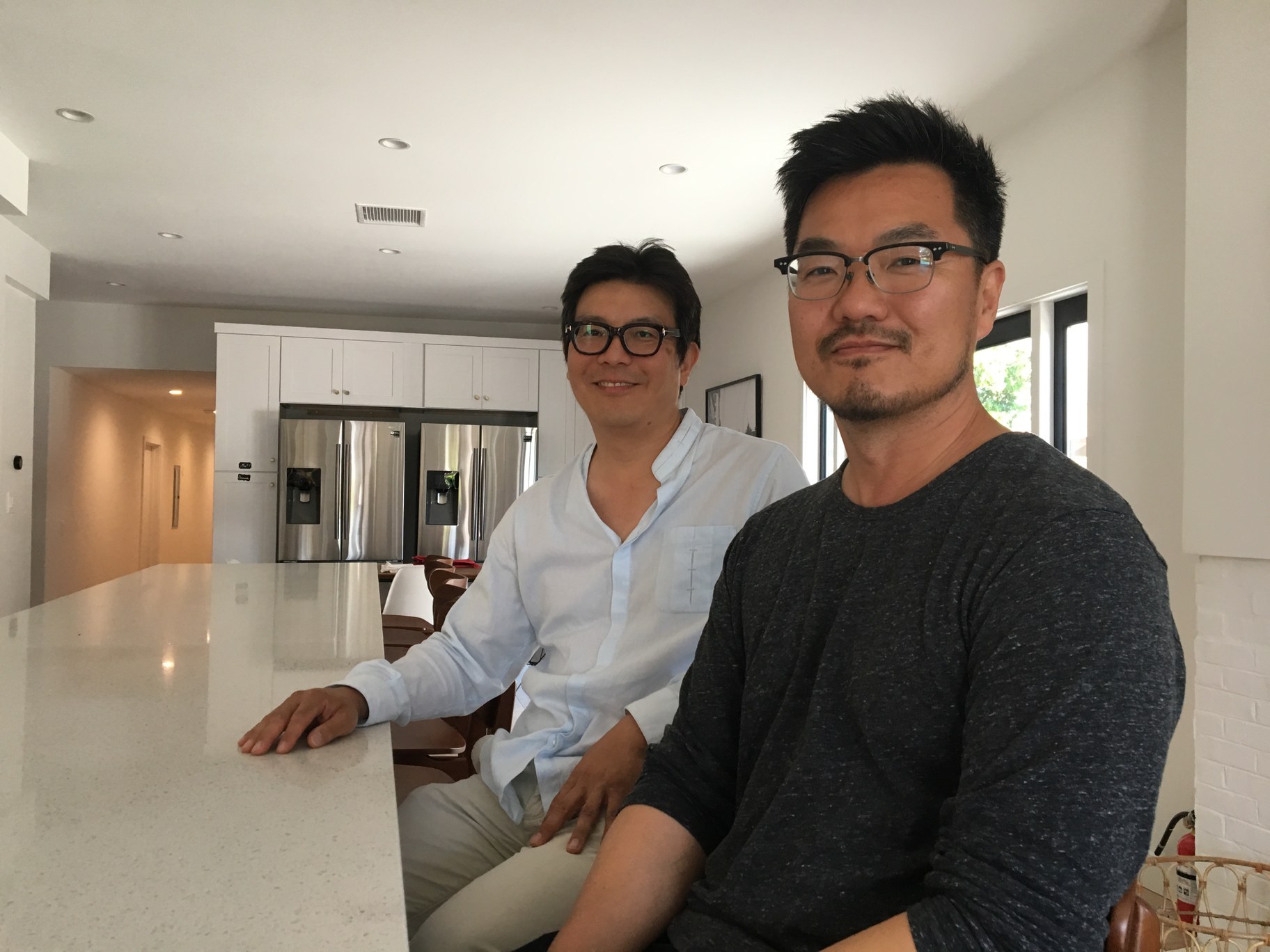 Architect and developer David Chun, right, and his business partner Lindon Shiao, at the large kitchen counter in their Koreatown Cohaus. Photo by Avishay Artsy/KCRW

Chun and his team bought a 5400-square-foot home at 152 South Serrano, and subdivided it into 15 bedrooms with shared common rooms. It adds density, without changing the exterior.

“We came in here and basically converted and redesigned the space to accommodate this whole multi-tenant lifestyle,” Chun said.

The dining area is tastefully decorated with modern furniture, a long kitchen island, art by local artists, and food storage for each resident.

The housing manager, Lani Kim, works as a liaison between “members” and management. She also organizes events that help encourage a sense of community among the residents.

The “members” of Cohaus pay $1,250 a month for a single-occupancy, furnished bedroom with closet and bathroom, and they have access to a shared living room, kitchen and outdoor patio. Lease arrangements are for 6 or 12 months

“We want to have an all inclusive price which includes access to the private bedrooms as well as the common area spaces. And inclusive in that prices also all the utilities, weekly housekeeping services, basic supplies, etc.,” said Chun’s business partner, Linden Shiao. 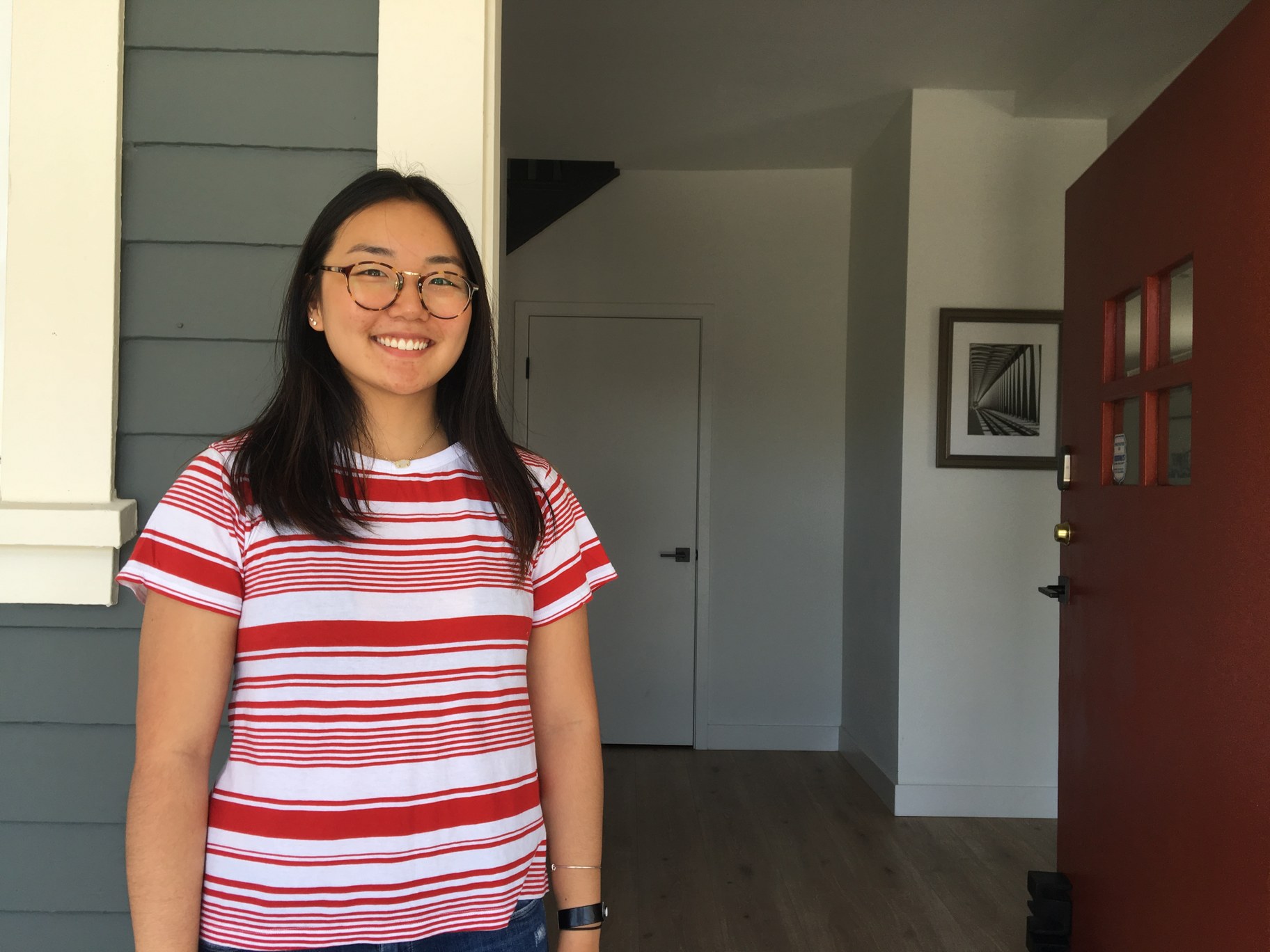 Lani Kim is the house manager at Koreatown Cohaus. Photo by Avishay Artsy/KCRW

Those amenities do not include a parking space, and parking is limited to about two or three spots in the front yard of the house. But Chun says that hasn’t been a problem.

“We did have a lot of concerns about that but we were surprised to find that, perhaps it's the generational difference, most of the people here are in their 20s and early 30s, and a lot of them don't have cars. We have e-scooters in front of our lot and people use Uber, Lyfts,” he said.

Members are invited to live there after filling out a questionnaire, and in some cases, meeting with housemates, who get to weigh in on whether to allow the new member in. This can make it feel a bit like a reality show, concedes Matt Winton.

“Oh absolutely. I mean if you put slightly more dramatic people in this setting and then you give them some framework... I'm sure it would be hilarious,” he said. 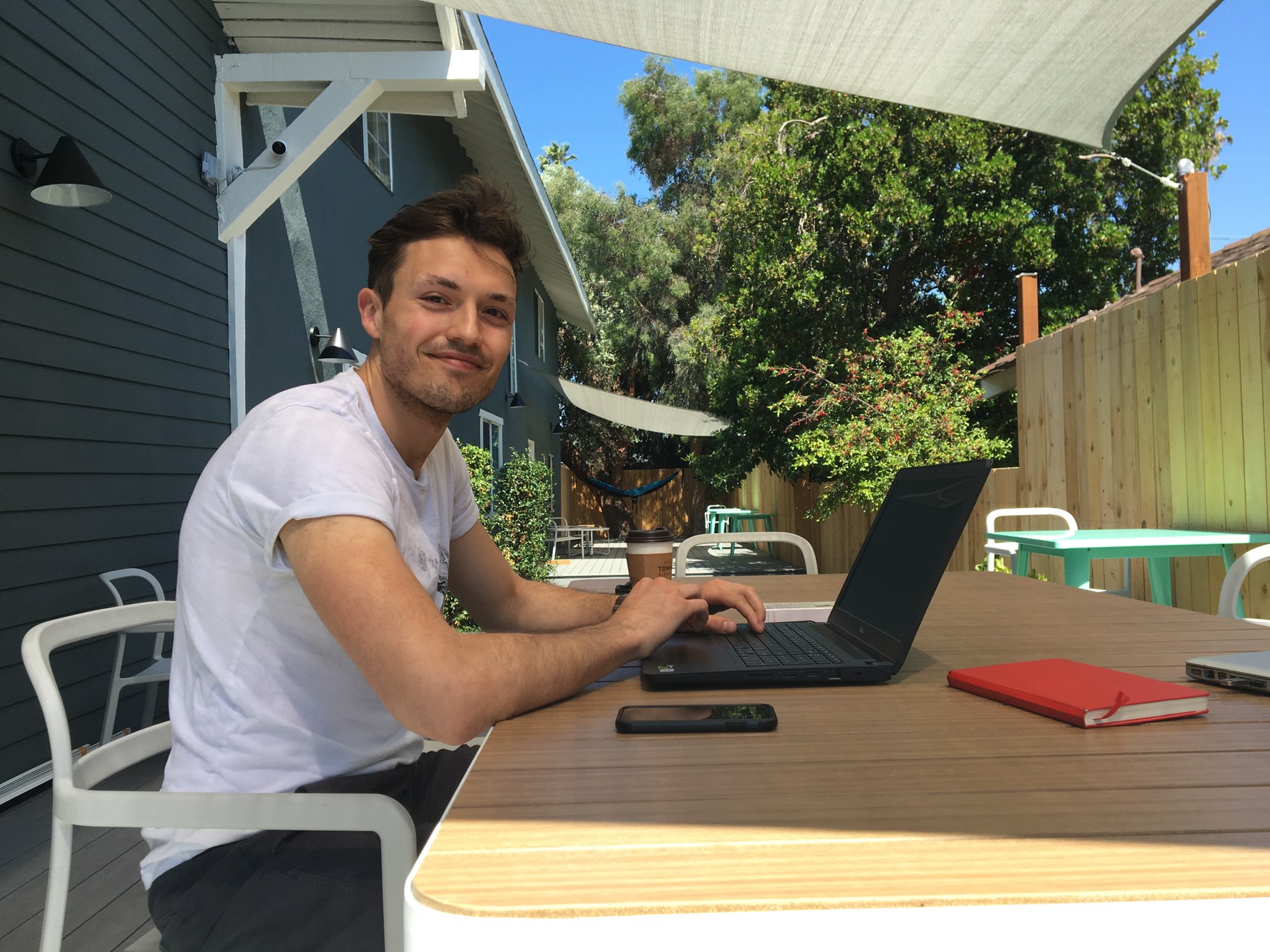 Matt Winton lives at Koreatown Cohaus. New to Los Angeles, he joined to save on rent and make friends. Photo by Avishay Artsy/KCRW

Winton came from Nashville, Tenn. to pursue a career in acting and bartending. He was drawn to living at Cohaus to save on rent and meet new people. Chun said that’s one of the strongest draws for members.

“LA, especially for a newcomer, can be a very lonely place. You just travel back and forth from your home to your office. So there's really not much opportunities to interact aside, from maybe your work environment. So I think people here are really interested, or certainly understand the value of this idea, of building a community, of being a part of a community,” Chun said.

What they want to avoid though is letting the members turn it into a fraternity house. At their Highland Park location, management had to ask a 19-year-old member to move out “because he would stay up late and play loud music and have friends over,” Chun said, ignoring house rules over quiet time.

“So that was a real learning process for us as we're continuing to learn with our second house,” Chun said. 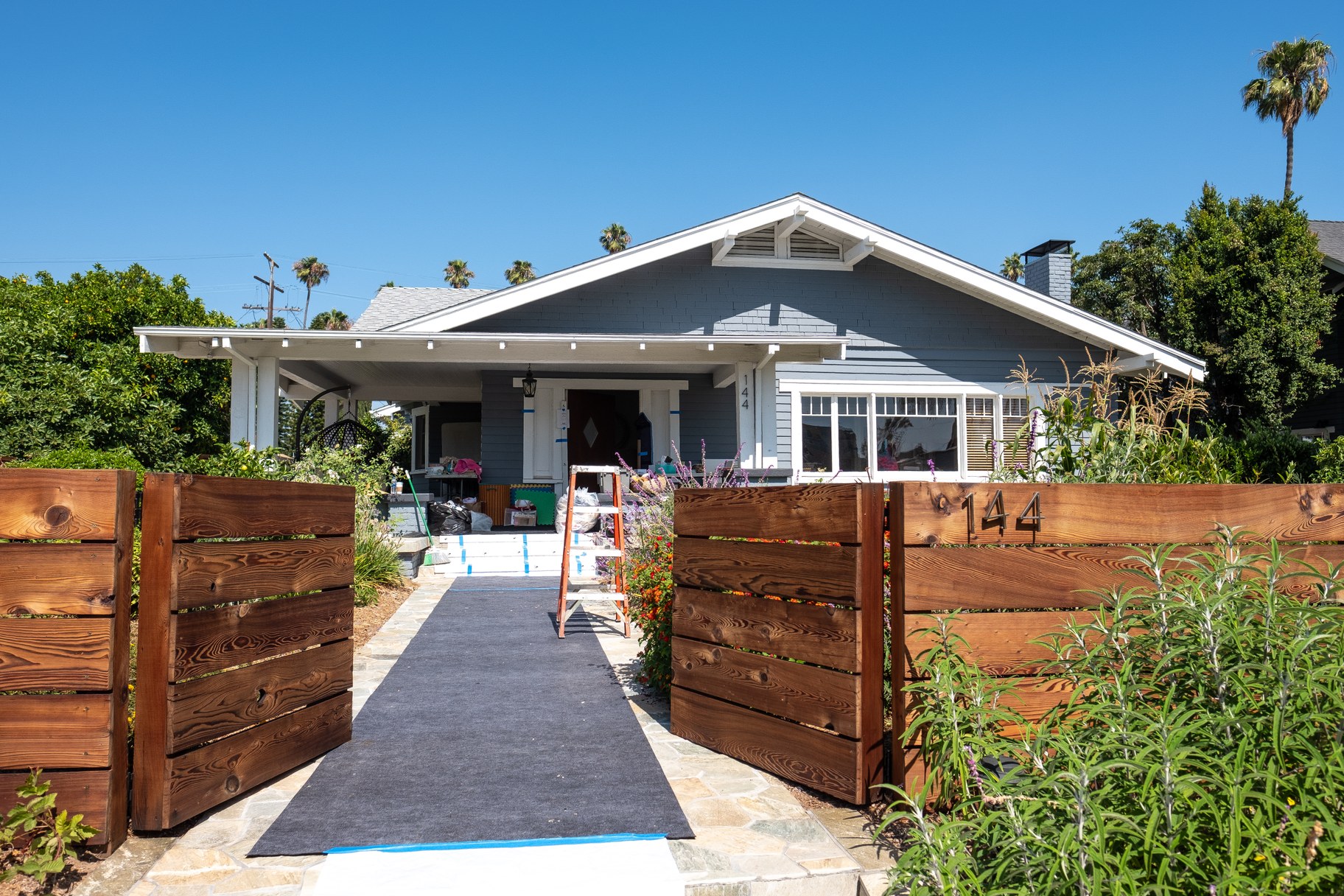 Peter Gibson’s house next door to Cohaus. He sometimes leases his home for TV and film shoots. Photo by Amy Ta/KCRW

Another challenge has been the negative reaction from some neighbors, one in particular: Peter Gibson, a location manager in the movie industry who sometimes leases his home for shoots.

“I feel bad for the people inside because of the owners doing what they've done,” Gibson said. “They put these people at risk of, you know, what if there's a fire, an earthquake? There's no sprinkler system installed. There's no clear fire access points. And all these things are taken into effect prior to issuing permits and allowing individuals to build these types of properties in neighborhoods.”

“Those permits and codes are put there for a reason in order to protect public safety,” he added.

Gibson says he’s reported the owners to the city’s Building and Safety Department.

The city’s building inspector told KCRW that the property owners were cited for such things as denying full access, for a breach of fence height and for installing a non-permitted HVAC system and four non-permitted tankless water heaters.

Chun points out that the building department identifies this as a single family house, and the city’s zoning code doesn’t define family as blood relations, but rather “one or more persons living together in a dwelling unit, with common access to, and common use of all living, kitchen, and eating areas within the dwelling unit.”

“So it's not a traditional definition of family, it's a much more open definition,” Chun said. 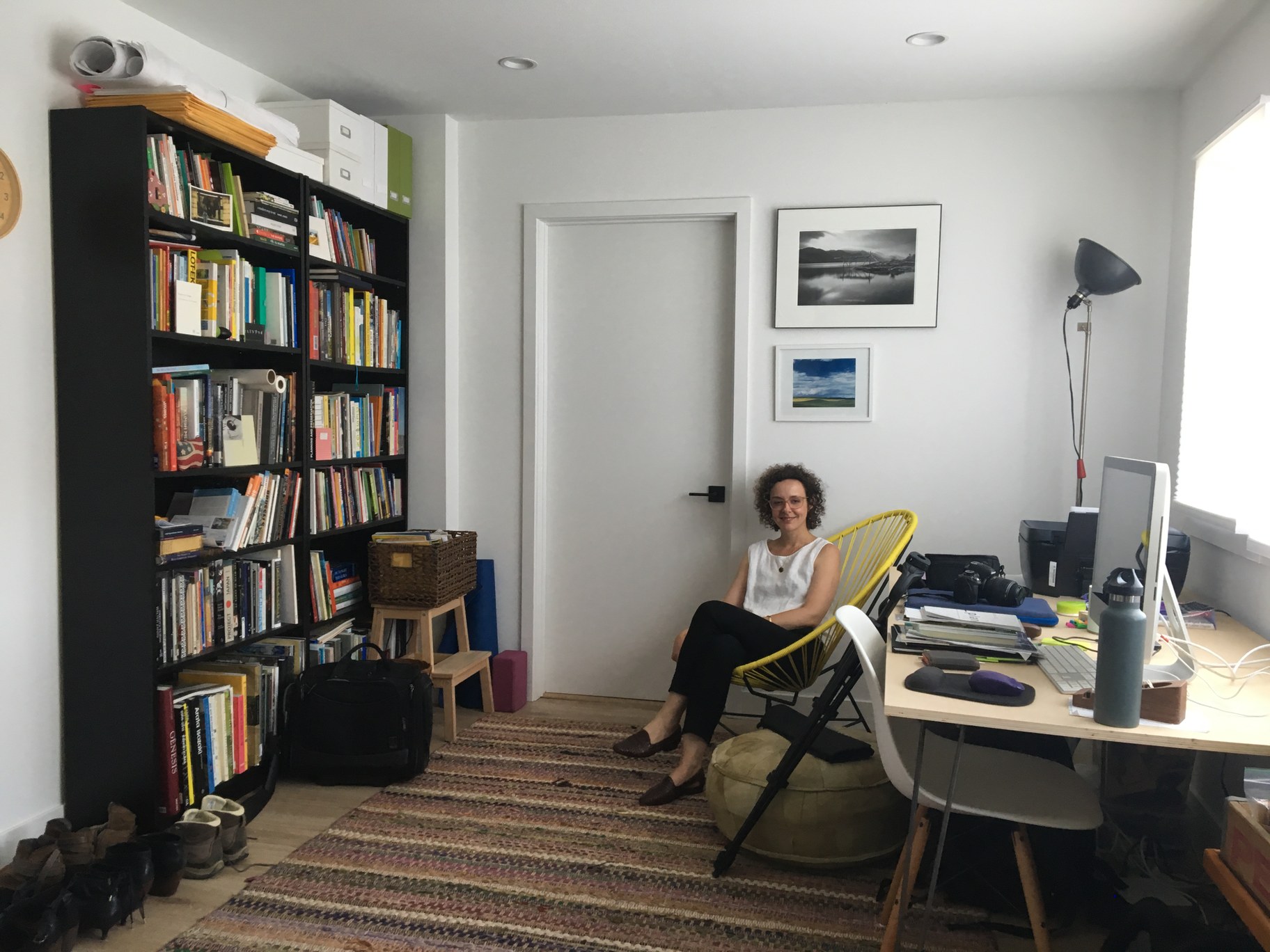 Luciana Varkulja, an architecture professor at USC, brought her students on a tour of the Highland Park Cohaus, and later became the first person to move into the Koreatown Cohaus. Photo by Avishay Artsy/KCRW

LA’s municipal code does not currently even define the term "co-housing."

Yet it’s a model that’s catching on, and could have the potential to transform LA’s single-family neighborhoods.

“I think that it represents the private market, frankly, and some entrepreneurs pushing forward with innovative housing,” said John Perfitt, head of Restore Neighborhoods LA, a real-estate nonprofit that focuses on affordable housing.

“I respect that people are putting down their own capital and making this happen because it makes a lot of sense. There's a ton of efficiencies… it appears to me that there's going to be robust demand for this type of thing.”

Coliving is a fast-growing housing type in Los Angeles, offering under one roof multiple units (bedroom and bath) along with common areas like a shared kitchen, dining area...

Two years ago the e-scooter company Bird launched in Santa Monica. Now the buzzy little dockless two-wheelers are in 100 cities and counting. And along the way have...